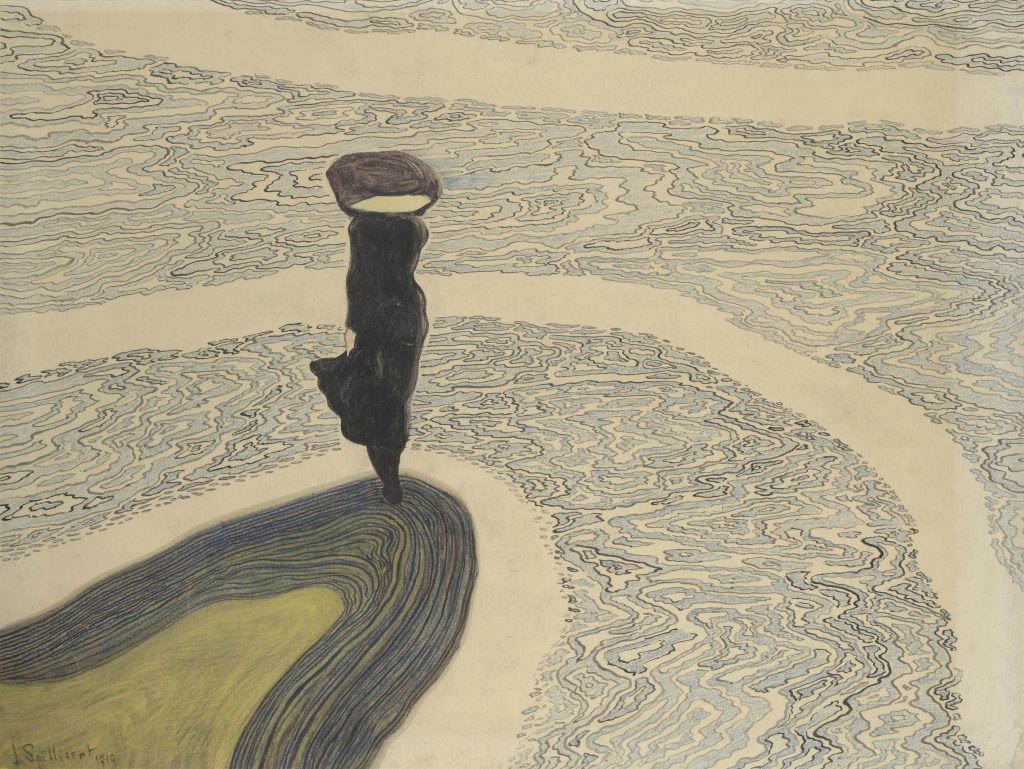 Leon Spilliaert Woman at the Shoreline 1910

In February 2020, the Royal Academy of Arts will present the first major exhibition of Belgian artist Léon Spilliaert (1881–1946) to be held in the UK. Bringing together around 80 works drawn from public and private collections across Belgium, France, Great Britain and the USA, the exhibition will offer a rare opportunity to discover this intriguing, singular artist who left an indelible mark on the twentieth-century art of Belgium.

Born in Ostend, the seaside resort on the North Sea coast patronised by the Belgian royal family, Spilliaert was a self-taught artist. Eschewing oil paint, he worked in combinations of Indian ink wash, Conté crayon, watercolour, gouache, pastel, chalk, pencil and pen on paper or cardboard, to create atmospheric works that are often imbued with mystery and melancholy. As a young man, plagued by insomnia and a chronic stomach condition, Spilliaert regularly walked along the deserted promenade and through the streets of Ostend in the dead of night, afterwards capturing the emptiness of the beach and town in a sequence of dynamic views defined by unusual perspectives and reflected light. Fuelled existential angst, Spilliaert also created a series of visionary self-portraits that reveal his preoccupation with his identity as an artist. These potent images of solitude align Spilliaert with Nordic artists such as Edvard Munch, Vilhelm Hammershøi and Helene Schjerfbeck, who likewise wrestled with visual explorations of the self at the turn of the twentieth century.

A love of literature and philosophy, in particular the work of Edgar Allan Poe and Friedrich Nietzsche, shaped much of Spilliaert’s early work, which has a brooding and at times romantic intensity to it. In 1902, Spilliaert started working for the Brussels publisher Edmond Deman, illustrating works by the playwright, poet and essayist Maurice Maeterlinck (who, in 1911, became the only ever Belgian recipient of the Nobel Prize for Literature) and the poet Emile Verhaeren, with whom he formed a close friendship. Verhaeren would be responsible for introducing the artist to numerous art and literary figures, including the Austrian novelist Stefan Zweig and the Belgian playwright Fernand Crommelynck.
Fleeing Ostend in 1917 to escape the German occupation, Spilliaert and his new wife Rachel Vergison set off for Geneva, where they planned to join a pacifist movement. But with little money and a new baby, they got no further than Brussels. Spilliaert would move between Ostend and Brussels for the rest of his life. Always fascinated by the natural world, his later work developed a softer focus, and he produced contemplative, tranquil works that conjure evening light or the shadows of beech trees in the Forêt de Soignes in Brussels, where he walked regularly.

The exhibition will be organised in four thematic sections, presenting a journey through the lifetime of this remarkably insightful and unusual artist. Entitled Illumination, section one will focus on Spilliaert’s engagement with literature, theatre and book illustration and introduce his poetic visions of nature, including Beech Trunks, 1945 (Private Collection). Section two, Crepuscule, will explore Spilliaert’s expressions of emptiness and loneliness in the twilit world he inhabited. Still-lifes and interior scenes transmit a quiet glow in the depths of night, and, as in Young Woman on a Stool, 1909 (the Hearn Family Trust) solitary women wait for their husbands to return from sea at the end of the day. This section will also include examples of a commission to illustrate Belgique II, one of the first airships in
Belgium. Section three, Littoral, examines Spilliaert’s fascination with the liminal areas between land and sea, and, as seen in A Gust of Wind, 1904 (Mu.ZEE) and Dike at night. Reflected lights, 1908 (Musée d‘Orsay), his depictions of the streets, beach and promenade of Ostend. The final section, Reflections, brings together an important group of self-portraits.