A joint project between artist Susan Aldworth and a team of neuroscientists, engineers and clinicians from the Newcastle University CANDO project (Controlling Abnormal Network Dynamics using Optogenetics*) has resulted in a remarkable new kinetic installation at Hatton Gallery, Newcastle-Upon-Tyne. Out of the Blue explores the experiences of people living with epilepsy through art, while showcasing the cutting-edge brain implants being developed by the CANDO project to try and control focal epilepsy. 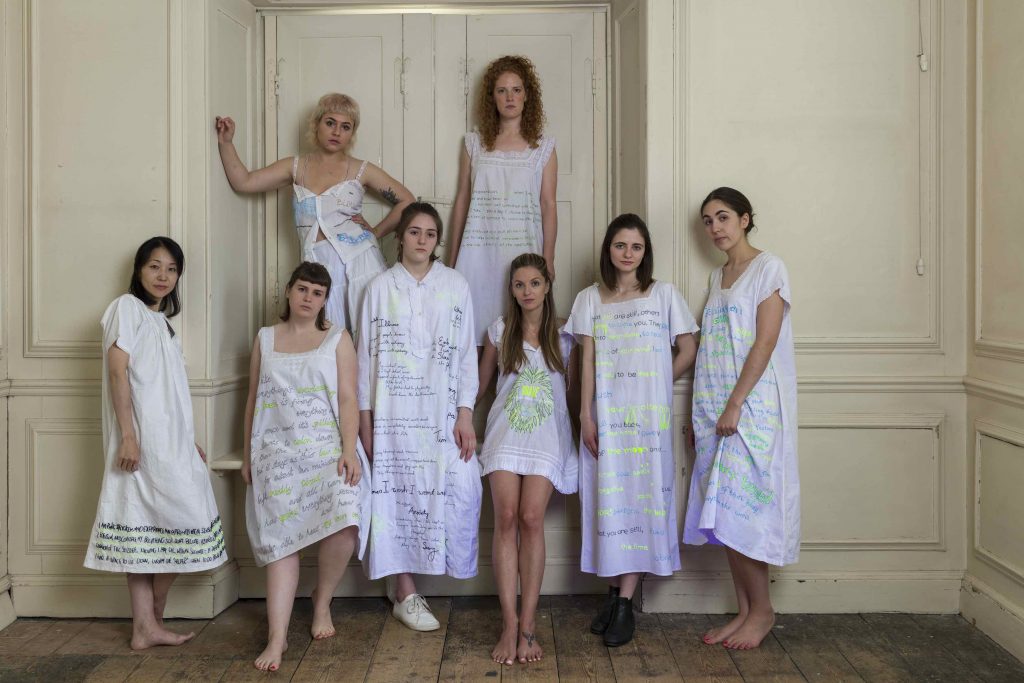 Illuminating the Self, Cando, at the Royal School of Needlework

Over fifty people living with epilepsy contributed their highly personal experiences to Out of the Blue. They came from all ages, diverse backgrounds, and from as far afield as Kenya, the USA and, of course, the UK. For many, it is the first time they have publicly shared their feelings, either as a sufferer, or carer, of someone living with epilepsy.

This was followed by a successful national appeal which found 100 experienced embroiderers and needlework specialists who volunteered to assist Aldworth sewing the testimonies of people living with epilepsy onto Victorian underwear using UV threads representing the hidden nature of epilepsy, now made public through the embroidered words.

Inside the gallery space, the 100 garments are attached to pulleys and motors, which shake in the manner of an epileptic seizure, while UV and blue lights are shone onto the work illuminating the words.

“The idea is to present the hidden experience of epilepsy on garments usually hidden beneath our clothes,”

“The installation brings the experience into the public domain. The threads fluoresce under UV light, effectively mirroring and representing the optogenetics employed in CANDO’s remarkable work.”

“The entire piece is programmed to move in the neural patterns and pathways associated with epilepsy. The movement will become increasingly synchronised and, once fully aligned, they will collapse onto the floor. Slowly, the clothes will start to move again, and restore themselves into their original configuration,” 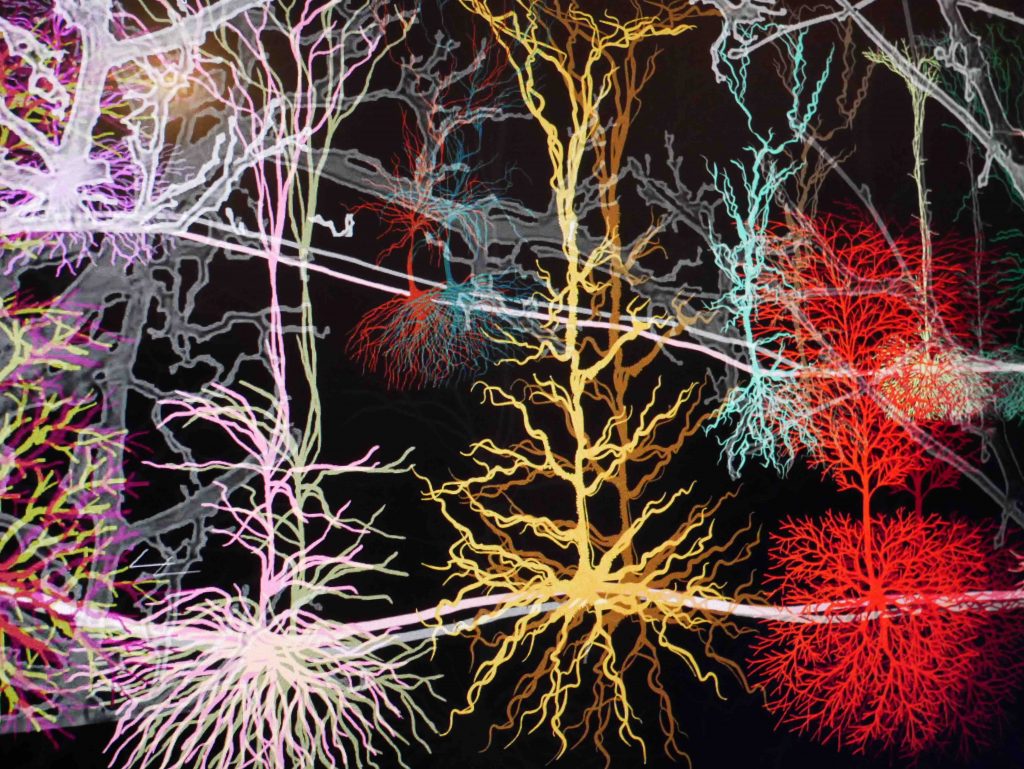 The significance of the 100 embroiderers and 100 items of clothing is also poignant, as epilepsy affects 1 in 100 people and uncontrolled seizures can have devastating effects on peoples’ lives. Out of the Blue seeks to highlight the experience of living with epilepsy and create a discourse about the ethical and personal implications of the CANDO implants.

“Each embroiderer approached the text in their own way. I can only describe them as exquisitely sewn narratives. These garments capture both the individual intensity of the testimonies and the special relationship that developed between the words and the embroiderer,”

Susan’s work is complemented by that of the artist and academic, Andrew Carnie. He has created video and light installations to creatively demonstrate the science and technology behind the CANDO project’s incredible implant – including a series of kinetic sculptures that are triggered by visitors as they walk through each of the exhibitions.

“The role of the audience is critical, as they form a part of the work triggering some of the sculptures actions. While focused upon the CANDO research, epilepsy is not an isolated condition, its effects are social as well as medical. While the optogenetics research using light to control cells in living tissue may have an impact beyond epilepsy and upon us all.”

A simultaneous exhibition at the Vane Gallery will show a series of cyanotypes – a historic photographic technique, which uses UV light to develop the prints. These artistically mirror the blue light used by optogenetics in the CANDO project. Aldworth’s prints will be exhibited alongside multi-image portraits of three people with epilepsy.

“By combining genetic engineering with brain implants we are on the verge of being able to use light to control brain cell activity and treat conditions like epilepsy. This offers hope to the many patients who do not respond to medication to control their seizures. Engaging the public and in turn creating awareness about the science we are employing through these exhibitions, can also help to shape future work, by ensuring that medical research works for the people it is intended for.”

About The Artists
Susan Aldworth is a visual artist who lives and works in London. She has a background in philosophy, and a strong interest in investigating the workings of the human mind, especially consciousness and our sense of self. Working as an artist-in-residence in a medical or academic setting is central to Aldworth’s practice – she has collaborated with scientists, clinicians and philosophers to investigate the many narratives of sleep, epilepsy, schizophrenia, consciousness in her explorations into what it means to be human. She has developed experimental print techniques to realise her ideas, including the historic Transience etchings printed directly from human brain tissue. Her work is held in many public and private collections including the V&A, the British Museum, The Fitzwilliam Museum, The Wellcome Collection Library and Williams College Museum of Contemporary Art, USA.  Aldworth is an associate lecturer on the MA Art & Science at Central Saint Martin’s, London. She has exhibited widely both nationally and internationally most recently The Dark Self at York St Mary’s, Realisation at The Fitzwilliam Museum in Cambridge and Susan Aldworth: The Portrait Anatomised at The National Portrait Gallery in London.

Andrew Carnie is an artist and academic at Winchester School of Art, Southampton University. His practice often involves meaningful interactions with scientists. He is a member of the Critical Practices Research Group at WSA where his own interests lie in exploring the self, through notions of hybridity, in organ transplantation and immunology, other themes and ideas are often based around neurology, the brain, and how we get a sense of ourselves through science ideas, and images. Carnie’s work is often time-based in nature, involving slide dissolve systems or video projection onto complex screens. In darkened spaces layered images appear and disappear on suspended voiles, the developing display absorbing the viewer into an expanded sense of space and time through slowly unfolding narratives that evolve around them. His work has been exhibited at the Science Museum, London, Natural History Museum, Rotterdam, Design Museum, Zurich, Exit Art, in New York, Williams College Museum of Art, Williamstown, Great North Museum, Newcastle, Pera Museum, Istanbul, Dresden Hygiene Museum, Morevska Gallery, Brno, and the Daejeon Museum of Art, South Korea amongst many others.

*Optogenetics is a biological technique that involves the use of light to control cells in living tissue, typically neurons, that have been genetically modified to express light-sensitive ion channels.
CANDO is a world-class, cross-disciplinary project to develop an alternative treatment for some focal epilepsies using light from a small brain implant to modulate abnormal activity and so prevent the development of seizures. The goal of this project is to create a successful first-in-human trial in epilepsy patients. It is a collaboration between Newcastle University, Imperial College London, University College London and The Newcastle upon Tyne Hospitals NHS Foundation Trust. More at CANDO at www.cando.ac.uk

Top 5 Stories on FAD This week

This week a couple of artist opportunities, two new awards; The Berlin Art Prize and The Free Range Emerging Art Award
plus a group exhibition New British from Patch a new London based curatorial collective.