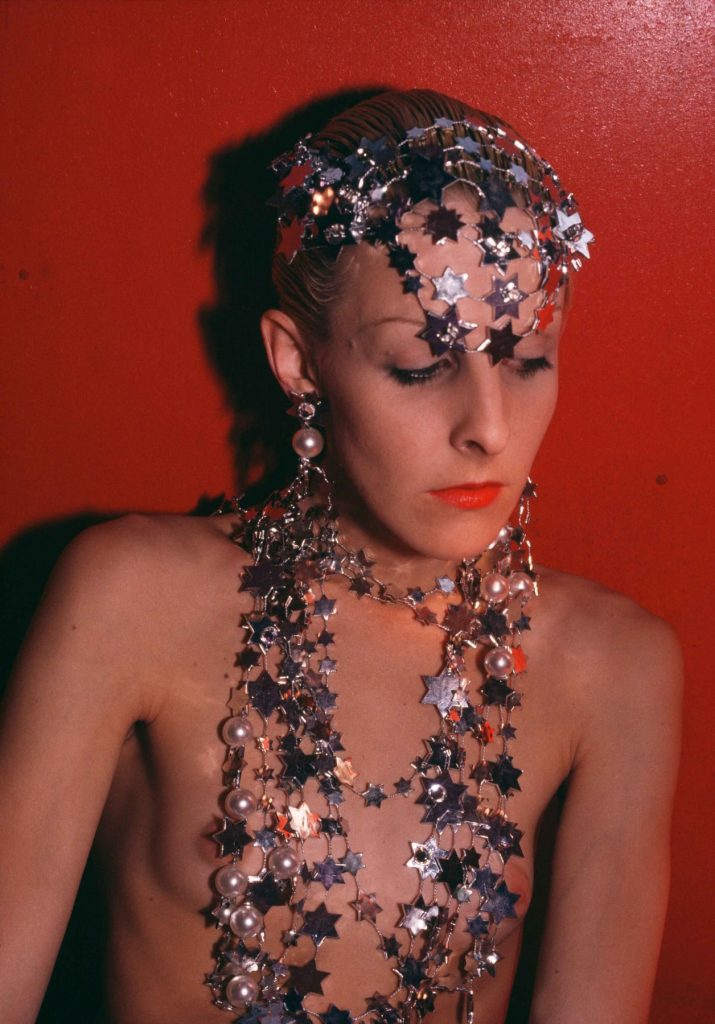 Nan Goldin opens her first exhibition with Marian Goodman Gallery who she joined in September 2018.
This major exhibition – the first solo presentation by the artist in London since the Whitechapel Art Gallery in 2002 – will present an important range of historical works together with three new video works exhibited for the first time.

Over the past year Goldin has been working on a significant new digital slideshow titled Memory Lost (2019), recounting a life lived through a lens of drug addiction. This captivating, beautiful and haunting journey unfolds through an assemblage of intimate and personal imagery to offer a poignant reflection on memory and the darkness of addiction. It is one of the most moving, personal and visually arresting narratives of Goldin’s career to date, and is accompanied by an emotionally charged new score commissioned from composer and instrumentalist Mica Levi. Documenting a life at once familiar and reframed, new archival imagery is cast to portray memory as lived and witnessed experience, yet altered and lost through the effects of drugs.

Bearing thematic connections to Memory Lost, another new video work, Sirens (2019), will be presented in the same space. This is the first work by Goldin exclusively made from found video footage and it will also be accompanied by a new score by Mica Levi. Echoing the enchanting call of the Sirens from Greek mythology, who lured sailors to their untimely deaths on rocky shores, this hypnotic work visually and acoustically entrances the viewer into the experience of being high.
A newly edited version of The Other Side (1994-2019), a slideshow originally made in 1994, will be presented alongside a number of photographs from the series of the same name. Several of these images have never before been exhibited publicly. Coinciding with the publication of the expanded and updated version of the accompanying book, The Other Side (Steidl, September 2019), the exhibition of this important project comes at a time when increasing attention is deservedly focused on the representation and inclusion of alternative gender identities. The Other Side was produced as a tribute to the artist’s transgender friends and Goldin was one of the first artists to celebrate and bring increased visibility to this diverse community. As she recently stated, The Other Side ‘is a record of the courage of the people who transformed that landscape to allow trans people the freedom of now. My dream since I was a kid was of a world with completely fluid gender and sexuality, which has come true as manifested by all those living publicly as gender non- conforming. The invisible has become visible.’1 While acknowledging the gaps in her own understanding of the current language around gender identity, Goldin adds that, although ‘she can’t freely navigate the terrain without stumbling’, she recognises the importance of bringing these images into the public consciousness again. ‘It’s important for them to know they’re not alone, and to know how they got here.’

Another new video installation by Goldin, Salome (2019), will be presented on three screens. Premised on the Biblical story of Salome – the stepdaughter of King Herod who asked on behalf of her mother for the head of John the Baptist on a plate as a gift for her dancing to the King and his guests – the work explores themes of seduction, temptation and revenge.

In addition, Goldin will present a series of large sky and landscape photographs taken during the 2000s in locations such as Brazil, France, Ireland and Italy. These subjects have been an important part of the artist’s practice over the last 30 years. The rich tonality and subtlety of form of these large images which look afar and above convey an ethereal, almost abstract quality that sits in counterpoint yet intimate unison to the rest of the exhibition. The context for these journeys is made more apparent in correspondence with Memory Lost, connecting the search for beauty, union and spaces of transcendence as entwined vistas within Goldin’s own aesthetic reflections on life.

About The Artist
Nan Goldin was born in Washington, D.C. in 1953 and lives and works in New York and Paris. Her work has been the subject of two major touring retrospectives: one organized in 1996 by the Whitney Museum of American Art and another, in 2001, by the Centre Pompidou, Paris and Whitechapel Art Gallery, London. A new commission for the Palace of Versailles exhibition Visible/Invisible is on view in Versailles, France until 20 October 2019. Recent solo exhibitions include The Ballad of Sexual Dependency, Tate Modern, London, UK, 2019; Fata Morgana, Château d’Hardelot, Condette, France, 2018; Weekend Plans, Irish Museum of Modern Art, Dublin, Republic of Ireland, 2017; Nan Goldin, Portland Museum of Art, Portland, ME, USA, 2017; The Ballad of Sexual Dependency, Museum of Modern Art, New York, USA, 2016. Nan Goldin has been the recipient of numerous awards including most recently the Ruth Baumgarte Award, Sprengel Museum, Hannover, 2019 and The Centenary Medal, London, 2018. Goldin was received into the French Legion of Honour in 2006 and awarded the Hasselblad Foundation International Award in 2007.