Marking 100 years since Howard Carter and Lord Carnarvon discovered the hidden resting place of the boy King Tutankhamun in the Valley of the Kings, this breath-taking exhibition of over 150 objects from the tomb has weaved its way from Los Angeles via Paris to London’s Saatchi Gallery, as part of a world tour taking in 10 cities. 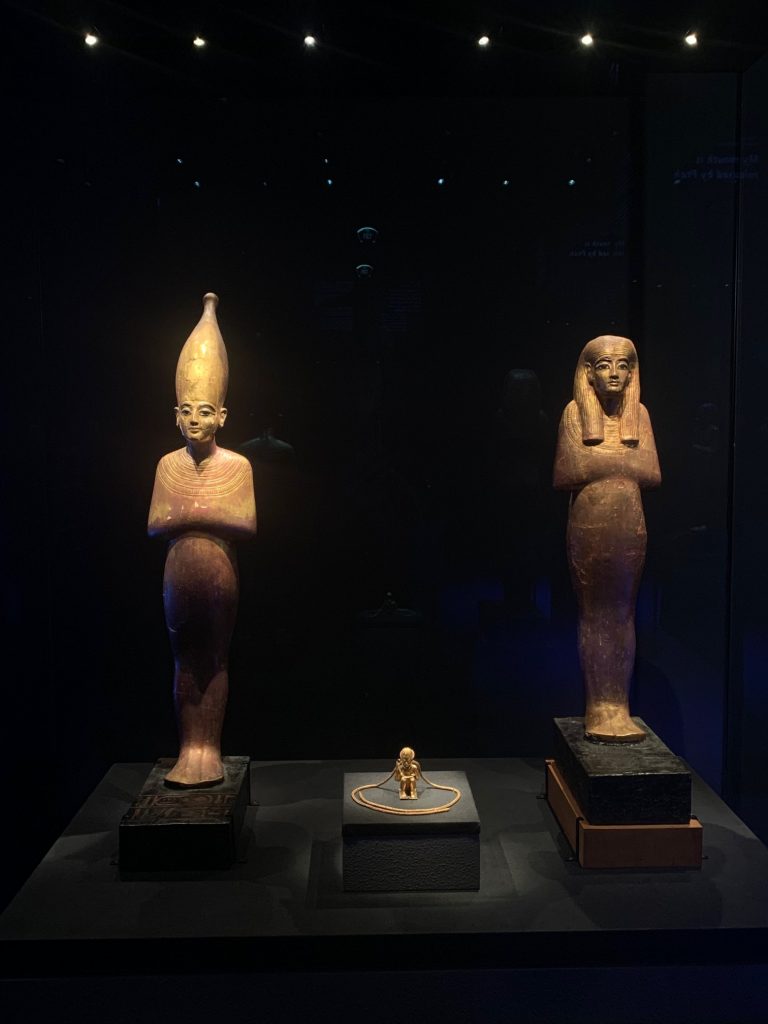 Curated by Tarek El Awady PH.D. the exhibition takes visitors on a journey through 9 galleries mapping the course of Tutankhamun’s passage to everlasting life. The Ancient Egyptians believed that death was a transition that constituted rebirth, and led the way to the possibility of eternal happiness. Consequently the funerary objects that surrounded King Tut in his tomb were created to aid him on his dangerous journey through the afterlife. 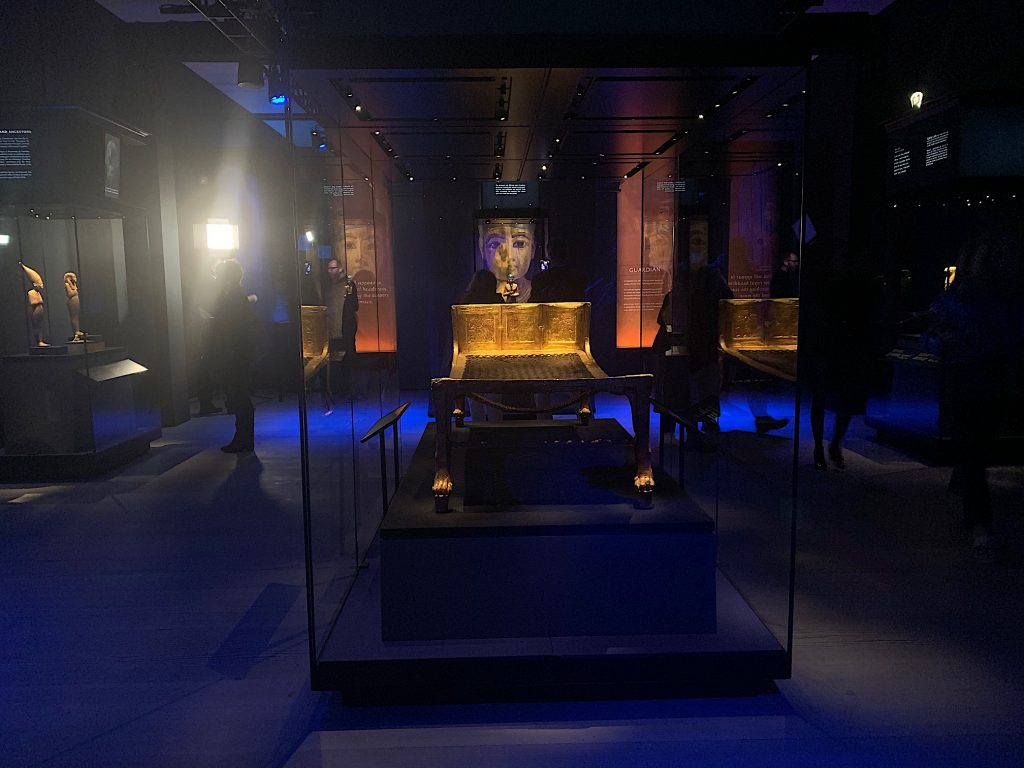 At the Saatchi Gallery press conference, world-famous Archaeologist Dr. Zahi Hawass told the packed room that the exhibition is a final world tour of King Tut’s treasures before they return to Egypt. The objects on this world tour will be reunited in Egypt with the entire collection of treasures from Tutankhamun’s tomb at the new Grand Egyptian Museum, which will be inaugurated in 2020.

Dr Hawass announced that he is currently leading a major excavation in the Valley of the Kings, where he is searching for the tombs of Queen Nefertiti and the wife of Tutankhamun – Queen Ankhsenamun, while he continues on his quest to discover the cause of death of Tutankhamun. This excavation is the biggest archaeological dig since Howard Carter and Lord Carnarvon discovered Tutankhamun’s tomb in 1922. 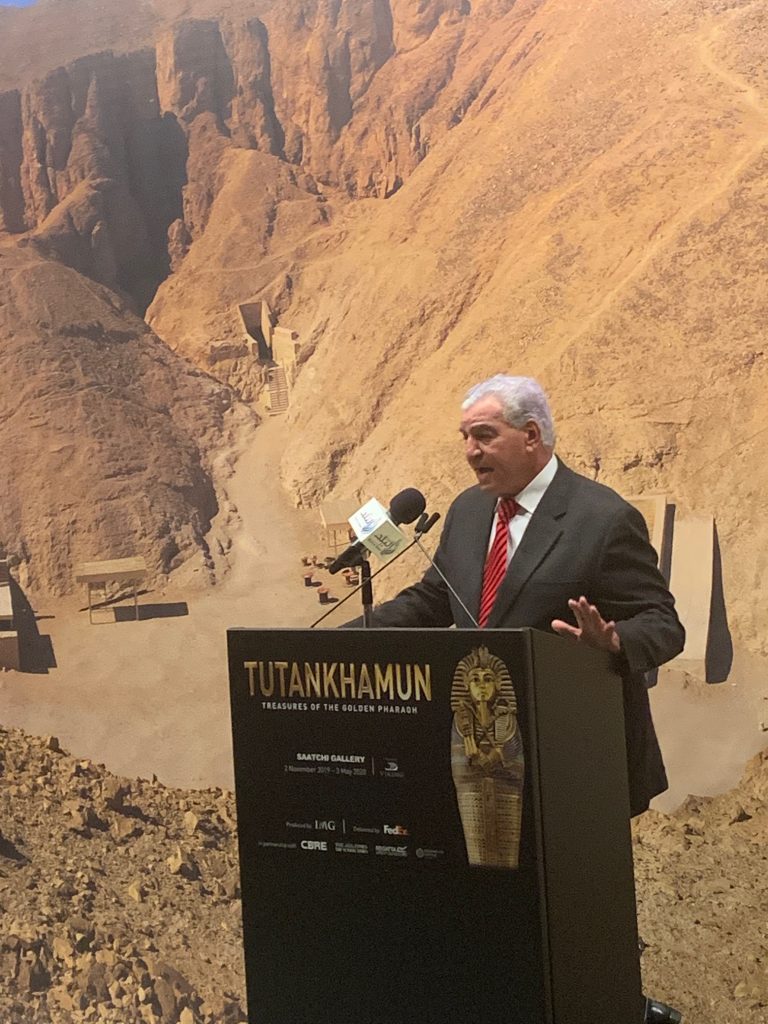 The discovery of the Golden Pharaoh’s tomb by British explorer Carter and financier Lord Carnarvon captured the imagination of the public, and was described as “the discovery of the 20th century.” Scientists and academics were astounded by the contents of the tomb, and the information it contained contributed significantly to a deeper understanding of Ancient Egyptian history.

There were exhibitions in 1972 and 2007, which attracted record numbers of visitors, and more than 1.4million people saw the current incarnation of the exhibition in Paris. The fascination with the contents of the only Ancient Egyptian Royal tomb to be discovered intact continues, and there will undoubtedly be queues around the block outside the Saatchi Gallery to catch the treasures before they return to Egypt. Out of the 150 treasures from Tutankhamun’s tomb on display, 60 have never left Egypt before.

This fascination with the contents of Tutankhamun’s tomb is totally substantiated by the sheer beauty and otherworldly aura of the treasures. There is something truly magical about this exhibition, with some of the most exquisite works of art on display that I’ve ever laid my eyes on. When you think of Egyptian art you might think of the flat renderings of characters featured in the Ancient Egyptian alphabet, such as two-dimensional birds, animals and people which certainly didn’t convey an accurate sense of perspective of the human body. Yet the sculptures on display here of Tutankhamun show an advanced understanding of the human form, alongside beautifully captured animal forms such as the gilded wooden hawk with an image of the scarab god Khepri decorating a disk on its head. It’s astonishing to think that the beautiful craftsmanship on display here is more than 3,000 years old.

In fact there is something so hauntingly lifelike about some of the sculptures, that it feels almost sacrilegious to be inspecting them at such close quarters in glass display cases, and I was overwhelmed with an uneasy feeling when I remembered stories of the ‘Curse of Tutankhamun’ and the tragedies that met Carter and the people who disturbed his sealed tomb.

Conspiracy theories about ‘The Mummy’s Curse’ surfaced in 1923 when Lord Carnarvon died from an infected mosquito bite, with his stepbrother dying unexpectedly a few days later. This was made into a big media story at the time by the Daily Mail, who claimed that the opening of Tutankhamun’s tomb led to the premature deaths of several people associated with the excavation, although some people dismiss rumours of the curse of Tutankhamun as an early example of ‘Fake News’.

This is the largest collection of Tutankhamun’s treasures ever to leave Egypt, but I was quite relieved that the exhibition doesn’t display the real mummy of King Tut in his coffin, which would feel disrespectful. Fortunately the King’s mummified remains were left in their rightful resting place in his tomb. 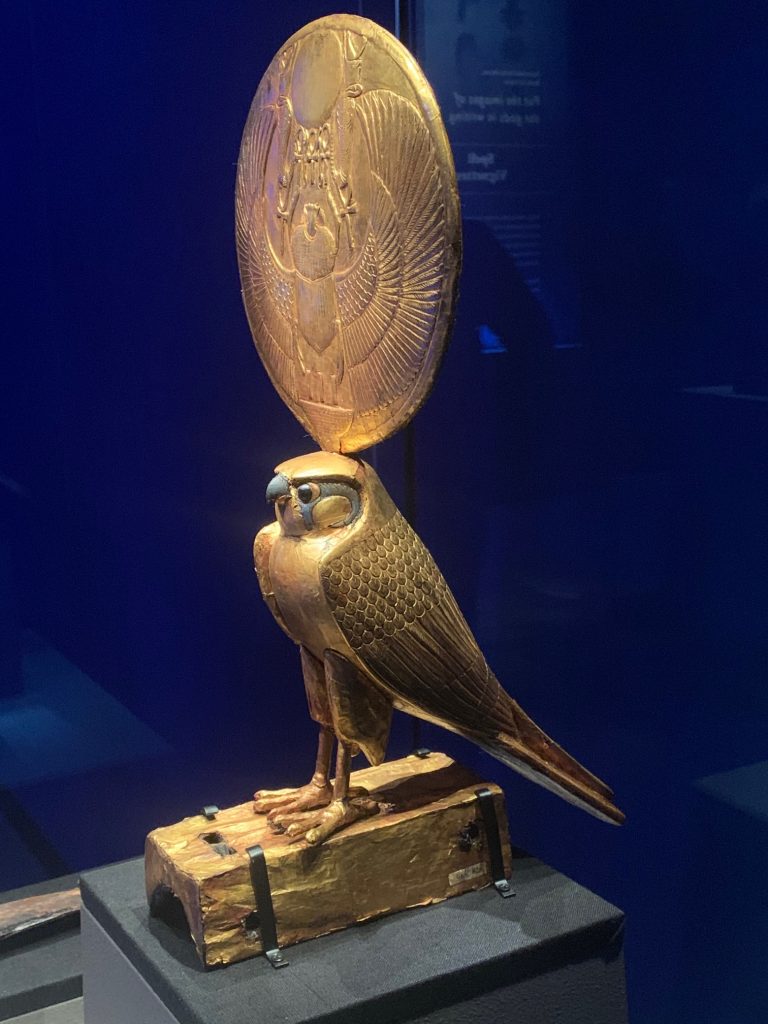 Highlights include; a miniature canopic coffin of Tutankhamun; a wooden statuette of the Golden Pharaoh riding a black varnished Panther, believed to represent Mafdet the goddess who protected the solar star during its nocturnal journey; and a colossal Quartzite sculpture of the Golden Pharaoh in the final room of the exhibition.

An introductory video is projected on a curved screen at the entrance, providing a beginner’s guide to the story of Tutankhamun, who at the tender age of 9 took the throne after the death of his father, Akhenaten, reigning until 1325 BC when he died at the age of 19. During his reign he returned the capital city of Egypt to Memphis and re-opened neglected temples of the Gods and Goddesses of Ancient Egypt.

His tomb was laden with the prerequisite items that the Ancient Egyptians deemed necessary for Royalty to tackle the afterlife, including treasures created by a staggering total of 3,300 artists. More than 5,000 artefacts were placed inside the tomb, representing everything the ancient Egyptians thought a King might need for his journey into the netherworld including; chariots, funerary beds, bows and arrows, and jewellery. After its discovery by Carter and Carnarvon in 1922, the treasure was moved to the Egyptian Museum in Cairo, and Tutankhamun’s Mummy was left in its resting place in its outer coffin inside the tomb. 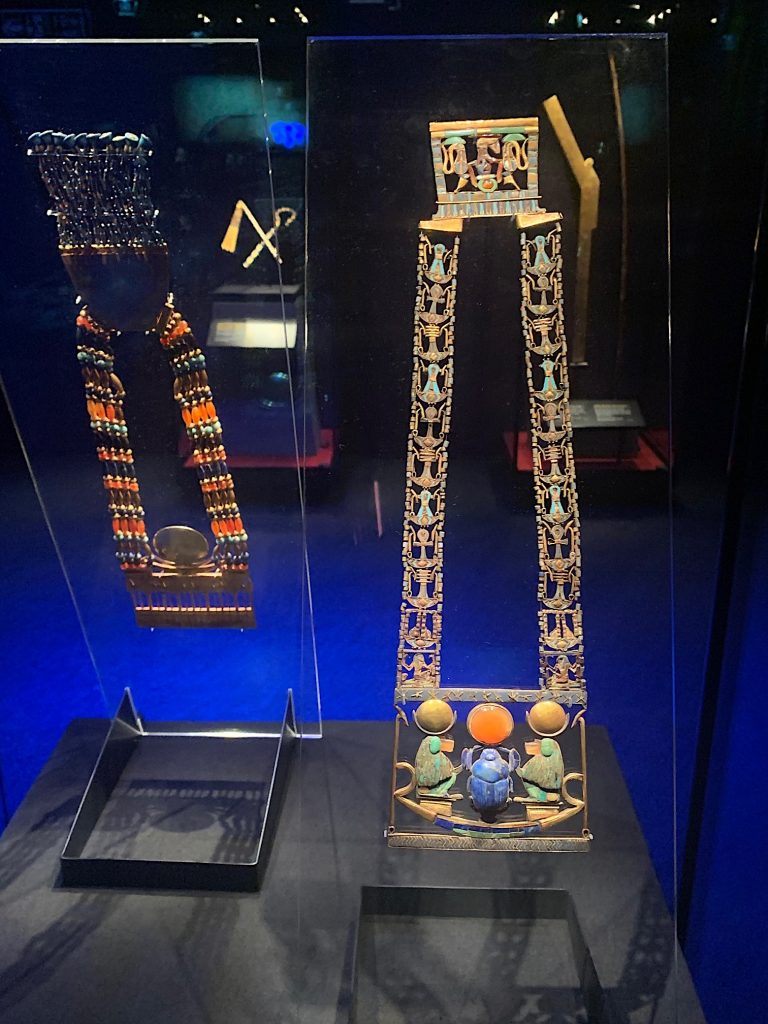 The ancient Egyptians believe when a person died they were divided into ‘ka’ or ‘vital energy’ (the life force that needs to be nourished) and the ‘ba’, represented by a human-headed bird, the soul of mobility that enabled the dead person to move around and sometimes leave the world of the dead. The ba, the ka, and the spirit, or akh, were reunited in the body and ensured the survival of the dead person in the afterlife.

After his death, King Tut was identified with the gods Re and Osiris, who were both Kings of Egypt in Egyptian mythology. So the tomb of Tutankhamun contains many objects and inscriptions that refer to the nocturnal journey of the god in the netherworld at night. Tutankhamun’s association with the divine was represented by the amount of gold used in the tomb, referring not only to his royal status, but also as a metaphor for the imperishable flesh of the gods and reflection of sunlight, making gold a conduit for eternal life.

There is a lot of hype surrounding this exhibition, and it definitely has the feel of a well-oiled machine with the high production value, music and visuals that accompany the artefacts giving an interactive element. On the top floor there is a mind-blowing VR experience, which really gives a sense of the layout of Tutankhamun’s tomb and puts the objects on display in the exhibition into context. 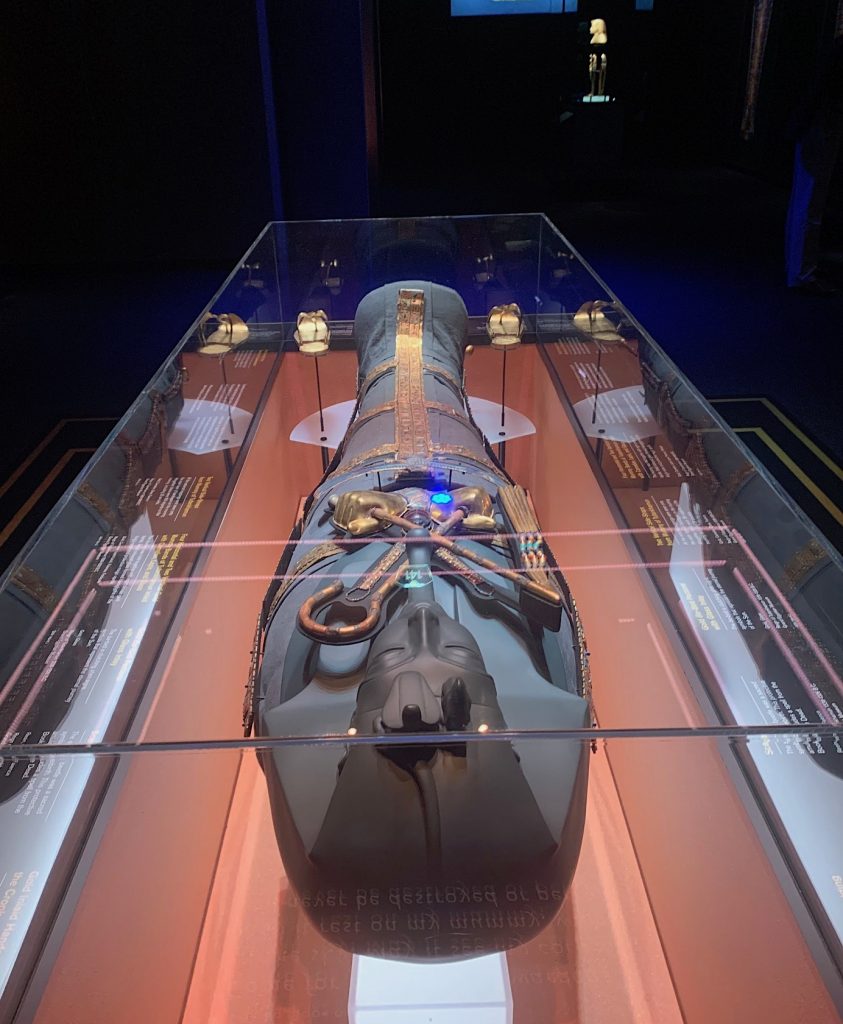 In this case I would say ‘do believe the hype’, for the treasures on display really are exquisite, and this may be the only possibility to get up close with such beautiful objects and have an insight into the art and belief systems of ancient Egypt before the treasures return to their rightful resting place at the Grand Egyptian Museum.

Until 3 May 2020 at Saatchi Gallery: https://www.saatchigallery.com/art/tutankhamun.php