Tim Walker: Wonderful Things invites visitors into the fantastical imagination of Tim Walker, one of the world’s most inventive photographers. The largest exhibition of Walker’s pictures to date, it celebrates his extraordinary contribution to image-making over the last 25 years and the inspirational role that the V&A’s collection plays in his process. 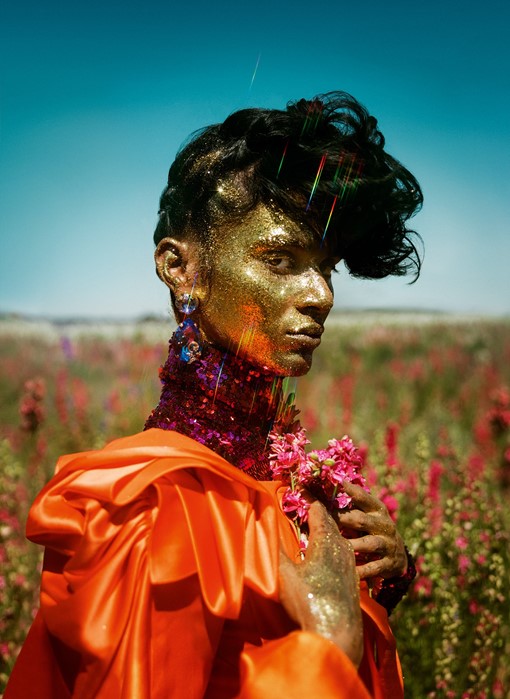 “Exploring the V&A’s historical paintings from South Asia reminded me of how I feel when I’m in that part of the world. These photographs are a celebration of the country’s vibrancy and mysticism and its rich history of storytelling. Luckily, England was experiencing a heatwave when we made the pictures, and the Worcestershire delphinium fields were illuminated in an intense Indian light.” 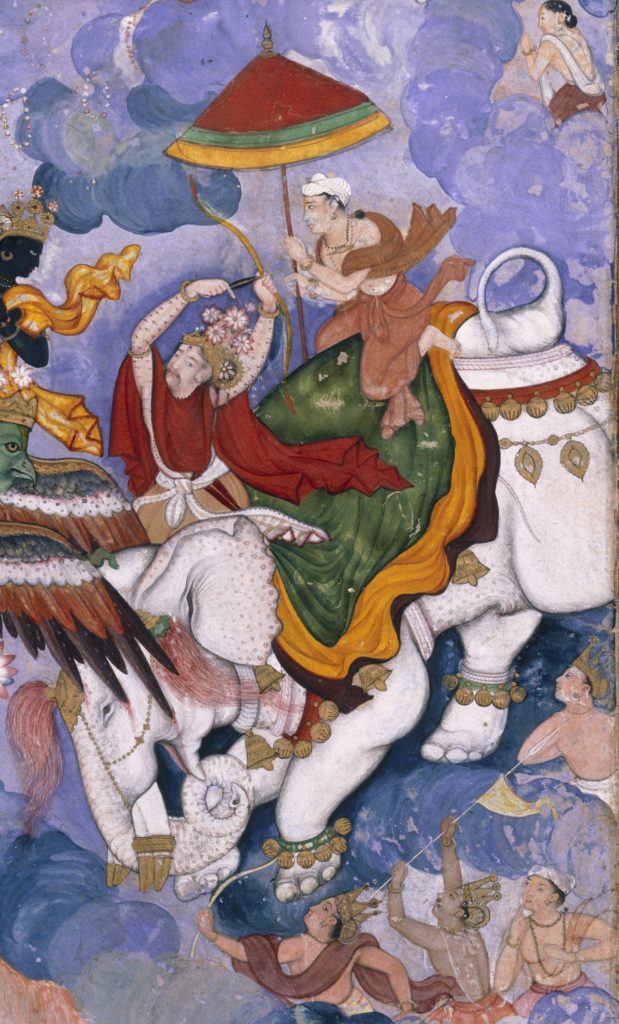 Krishna and Indra, about 1590, Mughal Empire, probably Lahore, watercolour painting and gold on paper © Victoria and Albert Museum, London
“When I first saw these perfectly preserved paintings, the ambiguous animals, rainbow-coloured rocks and powdery blue sky entranced me. The image is part of a bigger group illustrating the ‘Harivamsa’, a text that follows the great Sanskrit epic Mahabharata and recounts the life of the Hindu god Krishna. The tales explore loyalty, morality and virtue.” – Tim Walker 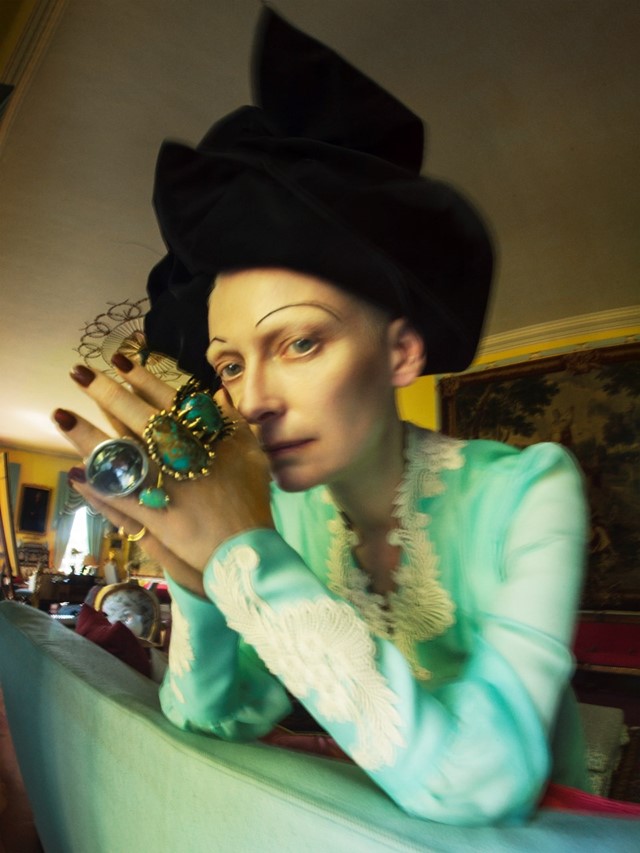 “The poet Dame Edith Sitwell had a striking personal style and was incredibly photogenic, especially in her later years as she grew into her extraordinary looks. Her flamboyant wardrobe included flowing brocade robes, velvet gowns, turbans, golden shoes and huge colourful rings. For this series of portraits, actor Tilda Swinton, who is a distant relative of Edith’s, inhabited the role of the poet at Renishaw Hall, the gothic house built by the Sitwell family in the 17th century. These pictures are a celebration of age and individuality – it’s a misconception that beauty is confined to the young. As Edith once said, ‘Why not be oneself?’” – Tim Walker 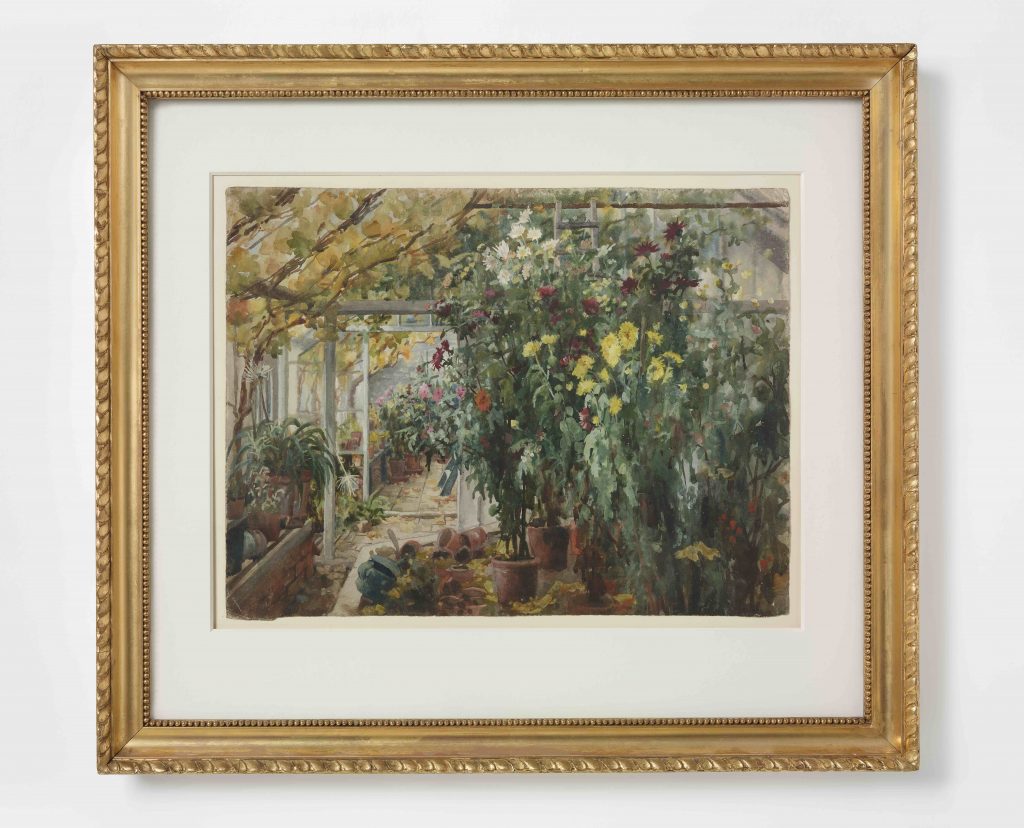 Edith Dawson (1862-1928), Conservatory at Renishaw, about 1885, watercolour and pencil on paper © Victoria and Albert Museum, London
“Inspired by this wonderful watercolour of the Sitwell’s greenhouse, we chose Renishaw Hall’s enchanting gardens with giant white Californian poppies and purple delphiniums as a backdrop for this shoot. As we walked around Renishaw, we could really feel the poet’s presence. Portraits of her ancestors line the staircase and Tilda and I were instantly enamoured with the beauty of the home.” – Tim Walker

“I’ve always been seduced by the inky blackness, confidence and eroticism of Aubrey Beardsley’s illustrations. The V&A houses dozens of his prints. I wonder whether they’re more shocking today than they were when they were first seen over a hundred years ago. Are we more prudish than the Victorians were I’ve known his work for years, but when I saw the prints close up, I could visualise them as photographs immediately. The challenge was to represent his mark-making in threedimensional space. It felt like we were drawing in the air with suspended wires and beads.” 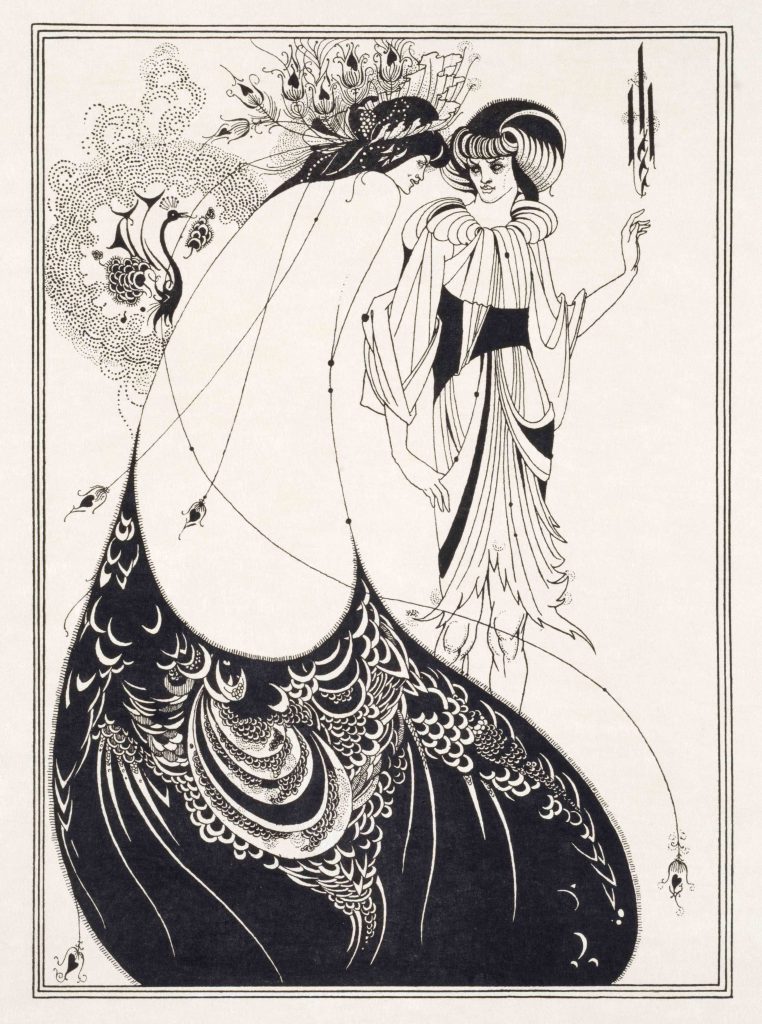 “This is one of Beardsley’s illustrations for Oscar Wilde’s translation of the French play ‘Salome’. For me, Beardsley’s images enhance the themes of gender ambiguity, eroticism and temptation within the play. They make me think of Wilde’s famous words: ‘The only way to get rid of a temptation is to yield to it’.” 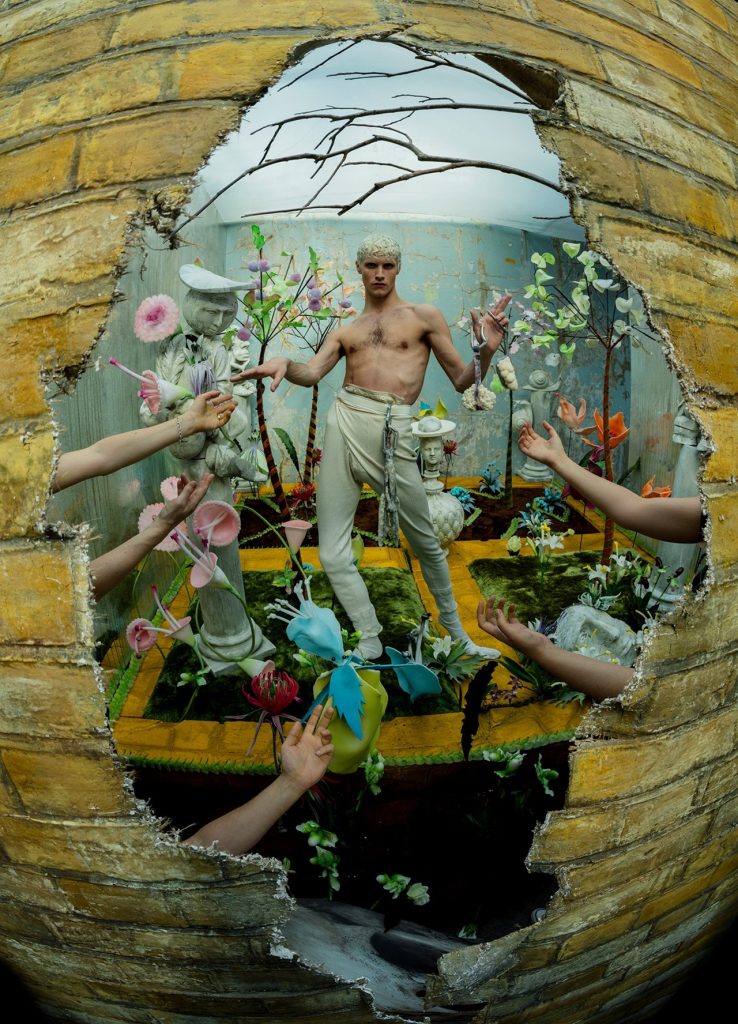 “We all have a need to store our secrets in a private world that we love. A diary, a scrapbook, or even a phone. The V&A’s embroidered casket which dates to 1675 feels like an expression of that need. An object of fantasy and transformation, it suggests a world in which you can safely be whoever you want to be, like the London club scene where freedom of expression reigns supreme. James Spencer, the central figure in this photoshoot, burst out of his family home and into that world dressed as a beautiful woman.”

Embroidered Casket, about 1675, England, wood covered with satin, silk and metal thread, mica and glass beads © Victoria and Albert Museum, London
“About four hundred years ago, teenage girls created embroidered boxes to show off their needlecraft skills. What I found particularly delightful about this box is the intricate miniature garden which lies inside, with fruit trees, flowers and ivory figures. Doors open on the lower section to reveal little drawers which might once have stored the owner’s most treasured, secret items.” – Tim Walker 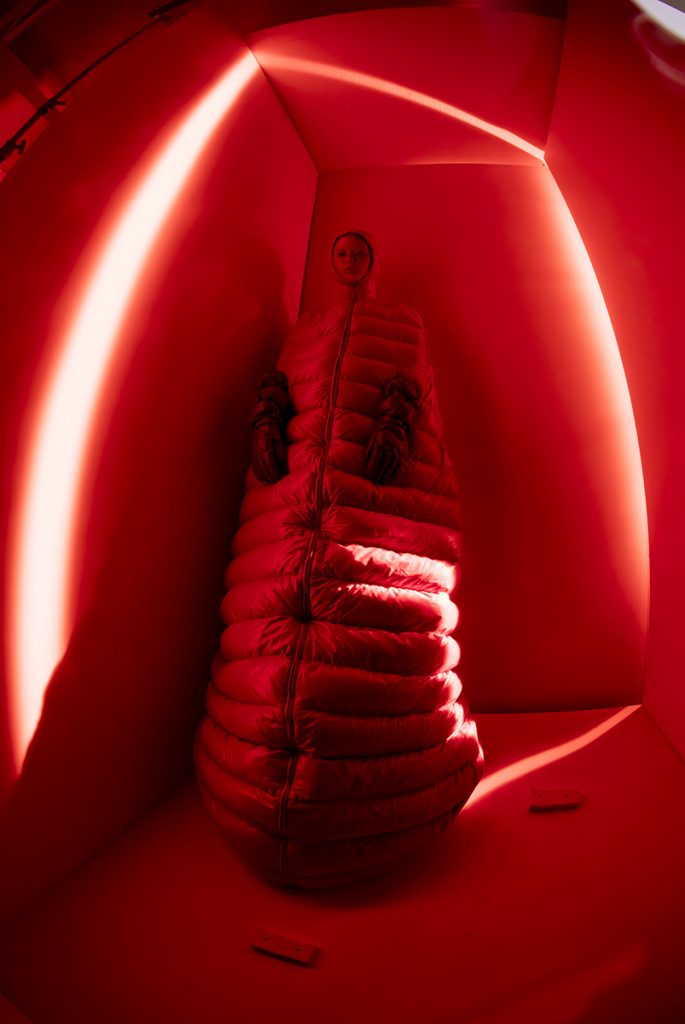 “The stained glass at the V&A is a kaleidoscope of glorious transparent colours, where each panel tells a different story. Illuminated red makes me think of my mother. When I was little, she made five big red silk lampshades for our sitting room. A warm glow came out of the house on winter evenings. For me, that colour represents coming home. Translucent colour provokes an immediate emotional response in me and is central to this photoshoot.” 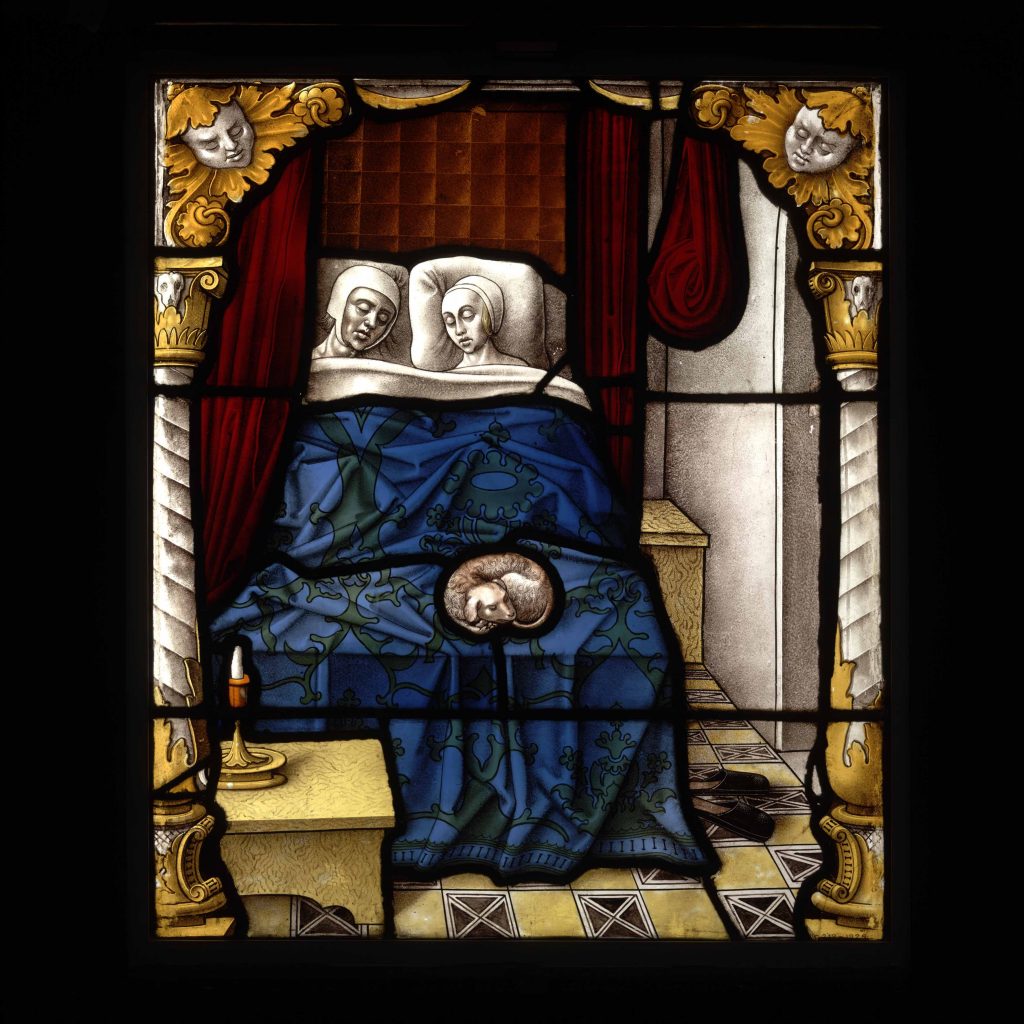 Tobias and Sara, about 1520, Cologne, Germany, glass with paint and silver stain, probably from the cloister of the abbey of St Apern © Victoria and Albert Museum, London
“This stained-glass panel in the V&A’s collection dates to 1520 and illustrates the story of Tobias and Sara from the Old Testament. The couple are sleeping peacefully under a blue bedspread, with a little dog curled up at their feet. Behind them hangs a deep red curtain. I was surprised by the domesticity and intimacy of this scene and felt inspired to incorporate the bed and the bold primary colours into my photographs.” – Tim Walker

Also on display are some of Walker’s most ambitious fashion stories and portraits of luminaries Sir David Attenborough, Margaret Atwood, Peter Blake and David Hockney, as well as a constellation of performers from Riz Ahmed to Cate Blanchett, Björk, Timothée Chalamet, Beth Ditto, Daniel Day-Lewis, Claire Foy, Saoirse Ronan and Solange Knowles. Encompassing Walker’s photographs and the V&A objects that inspired them, short films, photographic sets and props, scrapbooks and sketches, the exhibition takes visitors on a unique journey through Walker’s enchanted world.

Tim Walker: Wonderful Things Galleries 38a and 38 On Until– 8th March 2020 vam.ac.uk #TimWalkerxVAM