Somerset House again plays host to the 1:54 art fair, now in its 7th London edition with fairs in Marakesh and New York. On display are 45 galleries exhibiting a wealth of contemporary African artists, some established such as Yinka Shonibare and Hassan Hajjaj, and some exciting new discoveries such as Eddy Kamuanga Ilunga. A series of talks curated for the 1-54 forum programme and titled ‘Looking Back and Moving Forward’, will take place daily with speakers including Mary Sibande, whose striking solo exhibition takes over the Terrace Rooms of Somerset House. 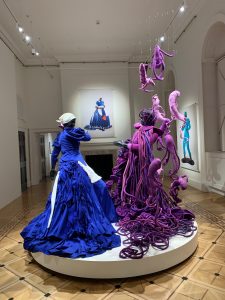 Mary Sibande: I Came Apart At The Seams: The inaugural UK solo exhibition of this powerful South African artist features as its centre piece a sprawling purple sculpture of the artist’s avatar ‘Sophie’, accompanied by a series of photographs of the artist in different styles of dress in an exploration of gender inequality, racial inequality and revolution in South Africa. ‘Sophie’ goes on a pictorial journey from domestic housemaid clad in blue, via a purple-robed figure symbolising the struggle against apartheid, to a triumphant red clothed Empress. http://1-54.com/london/exhibitors/mary-sibande-i-came-apart-at-the-seams/

Yinka Shonibare CBE at James Cohan Gallery: British-Nigerian artist Shonibare applies his distinctive batik material to a library of books and a traditional Royal carriage in his continued examination of race and colonialism. http://1-54.com/london/exhibitors/james-cohan/ 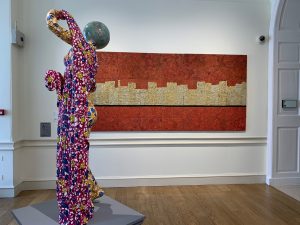 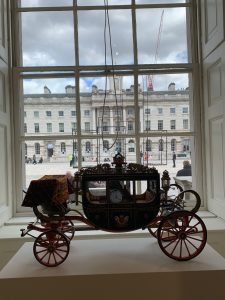 Chourouk Hriech at Atelier 21: A solo exhibition featuring delicate ink drawings and vast geometrical monochrome canvases by accomplished French artist Chourouk Hriech. Hriech takes the viewer on a trip through her memories of African landscapes, interspersing imagination and reality. Also on display is “Les Apparitions”, a series of drawings of ceremonial dresses found in Benin, Mali, Cameroon and the Ivory Coast. http://1-54.com/london/exhibitors/latelier-21/ 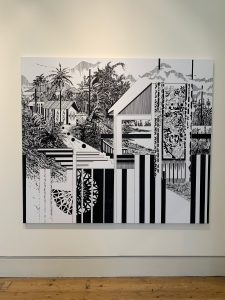 Eddy Kamuanga Ilunga at October Gallery: Technically impressive and intelligent large-scale canvases by talented young artist Eddy Kamuanga Ilunga dominate the October gallery exhibition. At the tender age of 27, Ilunga creates multi-layered compositions referencing uncomfortable motifs of the former colonisation of his birthplace of Democratic Republic of the Congo, such as the Toby Jug which was shipped to the Congo from Great Britain as part of the shameful slave trade, whilst interweaving modernity into his figures in the form of the electrical circuit boards that are one of the main commodities of contemporary DRC. The October Gallery booth also features striking sculpture and paintings by Romuald Hazoumè, Zak Ové, Alexis Peskine and LR Vandy. http://1-54.com/london/exhibitors/october-gallery/ 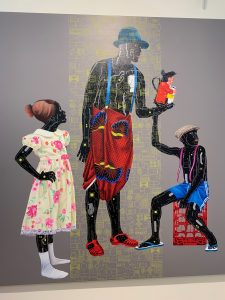 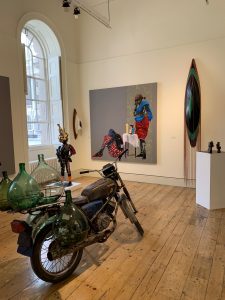 Leikun Nahusenay at Versant Sud gallery: Ehtiopian artist Nahusenay presents new work at 1-54 fresh from his residency in Marseille. The artist is creating an in situ wall collage and displaying exquisite rugs and images inspired by the human form: http://1-54.com/london/exhibitors/leikun-nahusenay/ 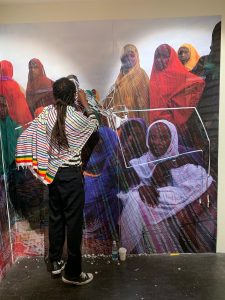