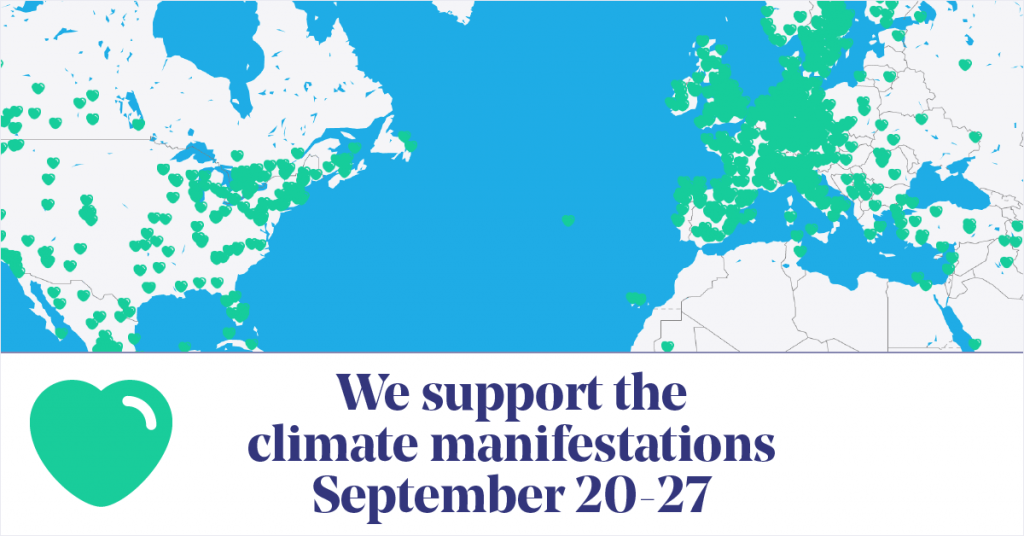 In conjunction with the UN Climate Action Summit in NYC over 3,000 climate manifestations will take place worldwide. On WeLoveClimateAction.org which launches this week, businesses and organizations can support the global climate movement by encouraging their employees and members to attend one of these manifestations or host their own climate activity. Already over 50 organizations have encouraged over 9 million employees and members to support global climate action.

Global companies and trade unions have communicated their support for global climate action on their own. We decided to display and amplify this trend with the WeLoveClimateAction.org campaign where people and organizations can share their support with the world. Most organizations are beginning to realize that they have to get involved in this issue. There is no business on a dead planet. First, ordinary people become climate activists, then companies and organizations follow suit. This is very hopeful because it means it will become impossible for politicians not to act, says Ingmar Rentzhog, the CEO and founder of We Don’t Have Time.

At WeLoveClimateAction.org, people and organizations can sign up as supporters of the global climate manifestations taking place September 20th–27th. The signees represent a diverse group of people, companies, trade unions and membership organizations. They encourage their employees and/or members to partake in a climate manifestation/strike, or a manifestation hosted by the organization or its members and employees, such as climate awareness training. For instance will the Swedish truck company Scania halt operations for one hour to hold sustainability training for employees, and Bzzt, a cab company operating 100% electric vehicles, will offer free rides to climate protesters in Stockholm.

The manifestations will coincide with the UN Climate Action Summit in NYC, where world leaders will meet to discuss the escalating climate crisis. “Climate action week”, September 20–27, has the potential to become the largest series of coordinated global climate manifestations ever. Based on the number of upcoming manifestations reported by 350.org and Fridays For Future, We Don’t Have Time estimates that at least 2,300,000 people will participate in the manifestations. There is reason to believe that the number of protesters will be even greater.

About We Don’t Have Time
We Don’t Have Time is a social media network for everyone who wants to be a part of the solution to the climate crisis. If a large enough number of people want change, and if that energy is directed towards those in charge – change comes. But we don’t have time to wait. The social network is operated by the company WeDontHaveTime AB (publ), whose majority shareholder is the WeDontHaveTime Foundation. The Foundation’s principal purpose is to contribute to a reduced climate impact and an ecologically sustainable environment. Our headquarters is located in Stockholm, Sweden. More info: www.wedonthavetime.or