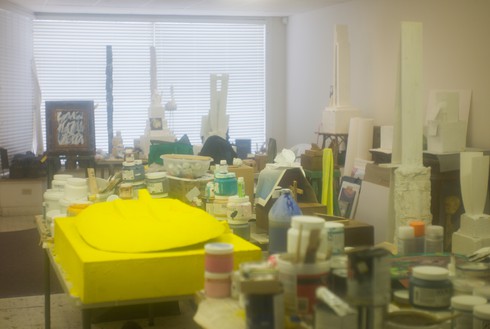 Twombly made his sculptures from found materials such as plaster, wood, and iron, as well as objects that he habitually used and handled in the studio. From 1946 onward, he created many assemblages, though they were rarely exhibited before the 1997 publication of the first volume of his catalogue raisonné. Often modest in scale, they embody his artistic language of handwritten glyphs and symbols, evoking narratives from antiquity and fragments of literature and poetry.

Many of Twombly’s sculptures are coated in white paint, which unifies and neutralizes the assembled materials and renders the newly formed object into a coherent whole. In referring to white paint as his “marble,” Twombly recalls traditions of Egyptian, Greek, and Roman sculpture while also subverting marble’s classical connotation of perfection through his roughly painted surfaces. The intimate scale of these works, together with their textural coats of paint, underscores their fundamentally haptic nature.
Some of Twombly’s sculptures allude to architecture, geometry, and Egyptian and Mesopotamian statuary, as in the rectangular pedestals and circular structures of Untitled (1977) and Chariot of Triumph (1990). Untitled (In Memory of Álvaro de Campos) (2002) comprises a rounded wooden trough stacked with a rectangular box, an elongated mound, and a vertical wooden board—all accumulating into a form that resembles a headstone or cenotaph. Thickly daubed in white, the sculpture bears the titular inscription scrawled in the graffiti-like hand so typical of Twombly’s drawings and paintings, and below it, the words “to feel all things in all ways.” Drawn from a poem by Álvaro de Campos (one of Portuguese poet Fernando Pessoa’s pseudonyms), the inscription suggests the legibility of the sculpture itself and positions the three-dimensional object as a surface to be worked on.

In 1979, Twombly began casting some of his assemblages in bronze. The first iteration of Untitled (2002), on view in this exhibition, was made in 1955, soon after his return to New York from Europe and North Africa. Like other works from this period, this sculpture makes reference to the ancient artefacts the artist encountered in his travels. Consisting of bundled sticks, it evokes an object of private devotion or fetish. By casting this work in bronze in 2002, Twombly literally and figuratively substantiated the small sculpture into something like an archaeological treasure recovered from the past.

To mark the completion of all volumes of the Twombly catalogue raisonné, Gagosian Davies Street, London, will host a store for the duration of the Grosvenor Hill exhibition, selling Twombly posters, prints, rare books, and the catalogue raisonné itself.

About The Artist
Cy Twombly was born in 1928 in Lexington, Virginia, and died in 2011 in Rome. Collections include the Centre Pompidou, Paris; Louvre Abu Dhabi; Menil Collection, Houston; Museum Brandhorst, Munich; Museum of Modern Art, New York; and Tate, London. Recent exhibitions include Cycles and Seasons, Tate Modern, London (2008); The Natural World, Art Institute of Chicago (2009); Sculptures, Philadelphia Museum of Art (2013); Paradise, Museo Jumex, Mexico City (2014, travelled to Ca’ Pesaro, Venice, in 2015); Treatise on the Veil, Morgan Library and Museum, New York (2014); and the major retrospective at Centre Pompidou, Paris (2016). Twombly received numerous accolades during his lifetime, including the Praemium Imperiale from the Japan Art Association, Tokyo, in 1996, and the “Master of Contemporary Art” Golden Lion award at La Biennale di Venezia in 2001. In 2010, Twombly’s permanent site-specific painting Ceiling was unveiled in the Salle des Bronzes at the Musée du Louvre; on that occasion, he was made a Chevalier of the Légion d’honneur by the French government.