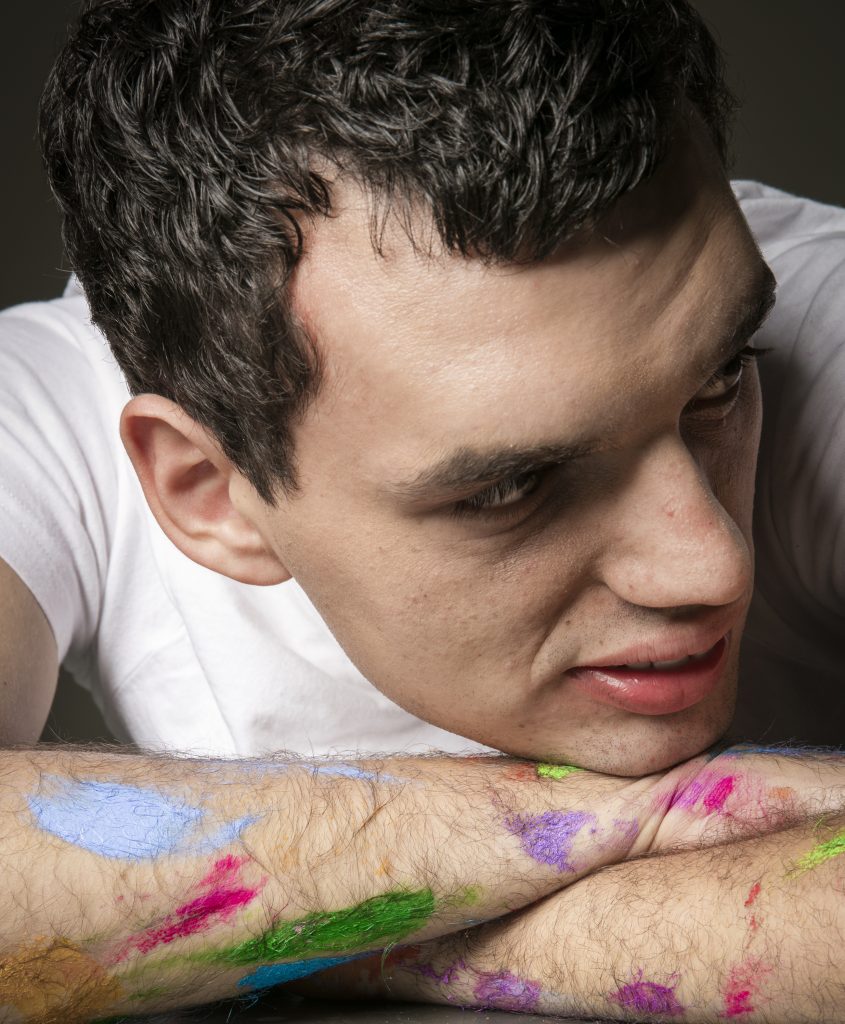 Following several sold-out shows all over the United States, Nicholas Kontaxis will show his work in London for the first time. This international exhibition is a pivotal moment for Kontaxis. It is even more extraordinary when you learn that the 23-year-old moves with great difficulty and his speech is limited. 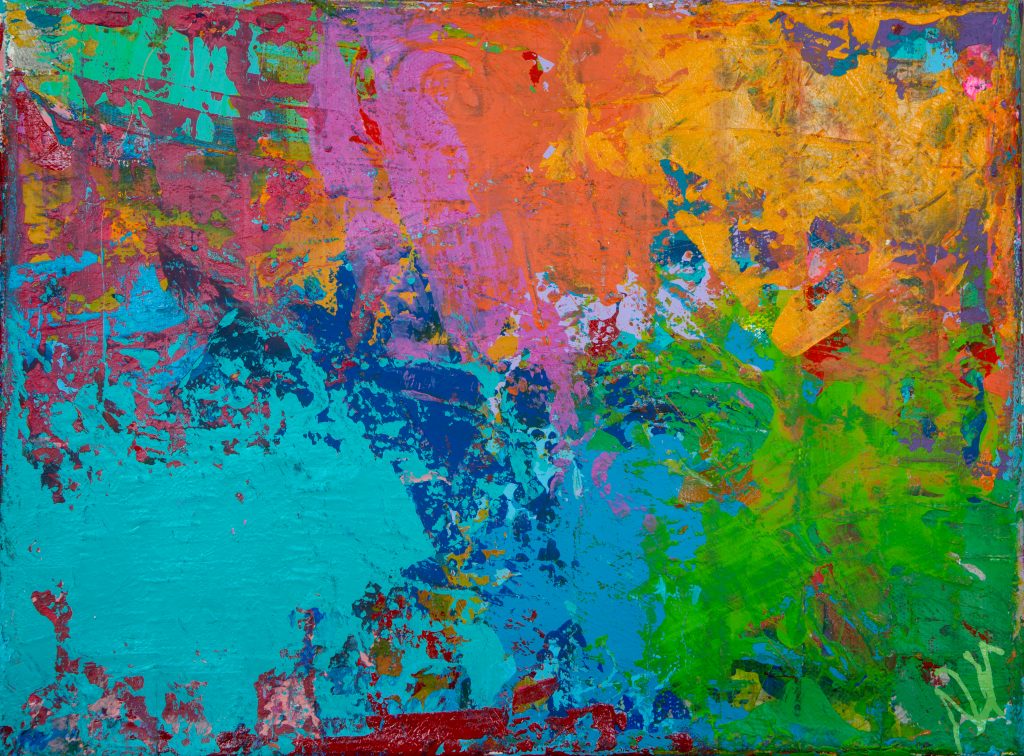 A celebrated, self-taught artist, Kontaxis has built a successful career creating captivating, large-scale paintings characterized by a riot of primary colours – despite facing overwhelming medical obstacles. Intensive medical treatment and behavioural therapy allow him to lead a remarkably full life, notwithstanding significant communication issues. His repetitive inclinations and love of texture and shape are reflected in his artistic practice which has become his voice in the world.

Unable to converse easily, Kontaxis’ painting is his conduit to, and conversation with the world. “I See You Sitting Up There,” “I’m Great Too,” “Let Your Hair Down,” “Pink Weeds,” “Good Music,” “Do You Have A Question,” and “exit means stop” – the witty titles of his works – are remarks that burst out of his mind throughout the day, revealing a happy disposition despite daily seizures. His brother Michael Kontaxis, who is very much Nicholas’ spokesperson, observed, “He twists the tortured artist cliché into something else because he is physically in torment but in the way that artists often see pain as essential to their work.” If all his canvasses were taken from the walls of a gallery and set alight, Michael adds, he believes that Nicholas would laugh and just enjoy the flames. A prominent art dealer once advised his mother Krisann to make sure he painted every day, but this has never been a chore for Kontaxis. Working in acrylic and with palette knives, standing, or sat on the floor as his condition sometimes dictates, Kontaxis loves to paint and goes at it with a slow stoic conviction, raw creative energy and a work ethic we could all learn from. The result of his immersed practise is a vibrant and textured abstraction, that has been met with delight and respect from the art world. 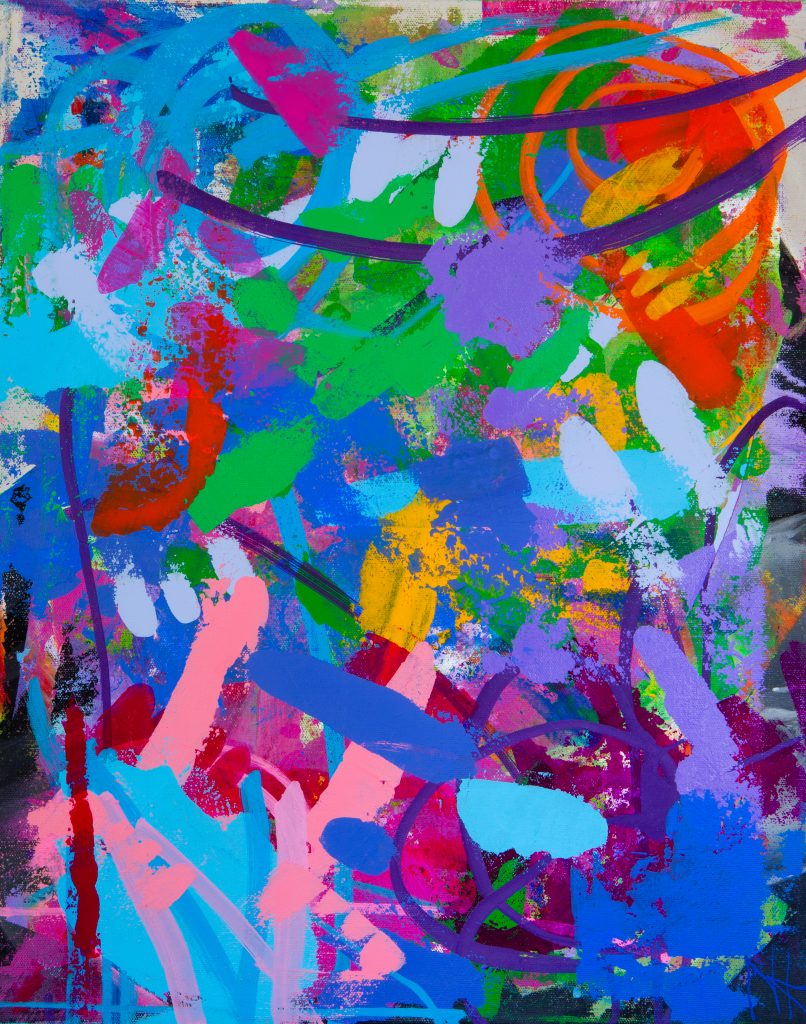 Nicholas’ parents discovered that he had a brain tumour when he was 14 months old. He can speak but what he says changes as the seizures change. The titles of his works are certainly catchy, reading like mini-soundbites that lend an even greater sense of playfulness to the technicolour schemes of the paintings. Now 23, he has had over 50,000 seizures, which strike him on a daily basis. Yet Nicholas, despite his pain isn’t tortured by his art. It is his art that gives meaning to his existence. Every picture tells a story, the, in this case, it is one of joy and a reminder that something beautiful can come out of adversity. Ultimately, Nicholas’ story as much about a family pulling together, as it is about the abstract canvasses that explode with primary colours.

They refused to take the easy option. Institutionalising his was never part of the plan. When asked why they chose painting as a medium, Nicholas’ mother Krisann explains that they had a large number of paints lying around in an old garage cabinet.

“As a youngster, Nicholas enjoyed laying down patterns on papers and was obsessed with vibrant colour. When no options were left for Nicholas in the school’s disabled working programme, mainly because of his daily seizures, we were worried he would never work in his life, which was devastating for us.”

Krisann explains that she and her husband Euthym, an emergency room doctor, had a lightbulb moment. He had excelled in art at high school, they had paint in the garage. The school district mandated that he had to earn a living in the job of his choice in order for them to allow him to pursue this at school in a job programme. As they knew he wouldn’t be able to occupy himself with a role that would occupy his time and give him a sense of purpose, they had to demonstrate that he could earn a living to continue. 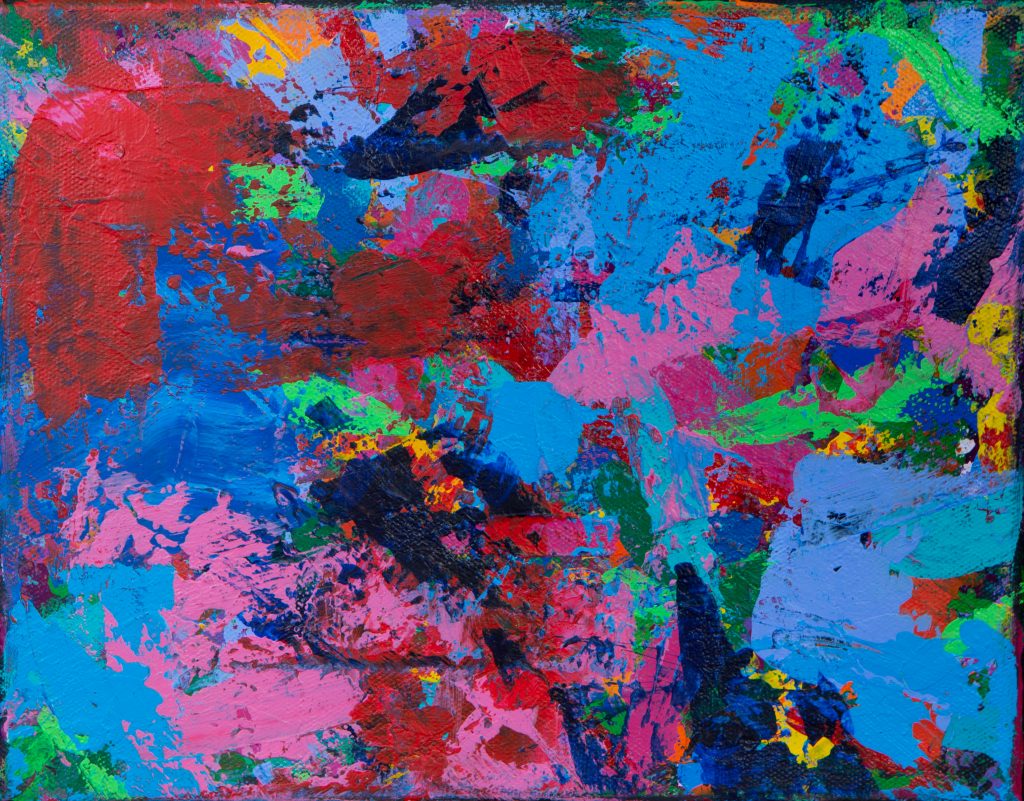 Nicholas started to paint and while they showed promise, it was never about making money for his family. It was about giving him a routine and a purpose, so he had a reason to create. The first few paintings sold fast. His school allowed him to set-up a corner studio. Once he started to sell, a friend suggested holding an exhibition. Krisann and Euthyn, a doctor were novices in the art world, nevertheless, they showed his work which sold out immediately. Unable to travel like he used to, Nicholas saw the world and his art from a very different vantage. Like Matisse, Nicholas is limited in his mobility and he won’t be able to travel to London for his first international exhibition, but he does experience beauty around him via the art he creates with his own hands. While he may not be able to travel, his work does and because his family refused to take the easy option, he is no longer anonymous outside this small nucleus, but has been commissioned by Coachella, Addidas and collected by international figures such as Roger Federer, who bought several paintings for his home.