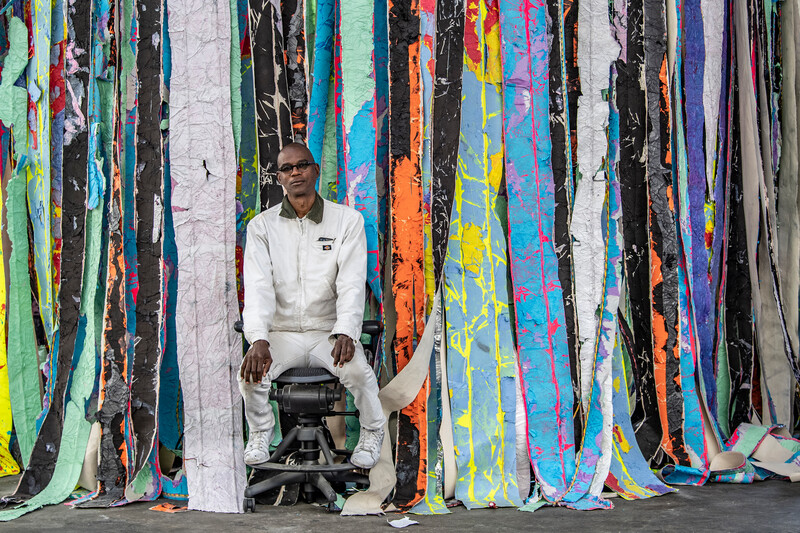 ‘Cerberus’ is Mark Bradford’s first exhibition at Hauser & Wirth in London and extends across the entirety of the gallery’s spaces. The exhibition of new work, including the film ‘Dancing in the Street’ (2019), sees Bradford return to ancient mythology, a consistent source of inspiration for the artist. Specifically, he now engages the many-headed dog guarding the entryway to Hades, Cerberus. It is a particularly resonant metaphor for Bradford, who has always been fascinated by interstitial spaces and figures. In fact, of the relationship between his art and his community engagement, Bradford has often declared his imperative to have one foot firmly planted in each. 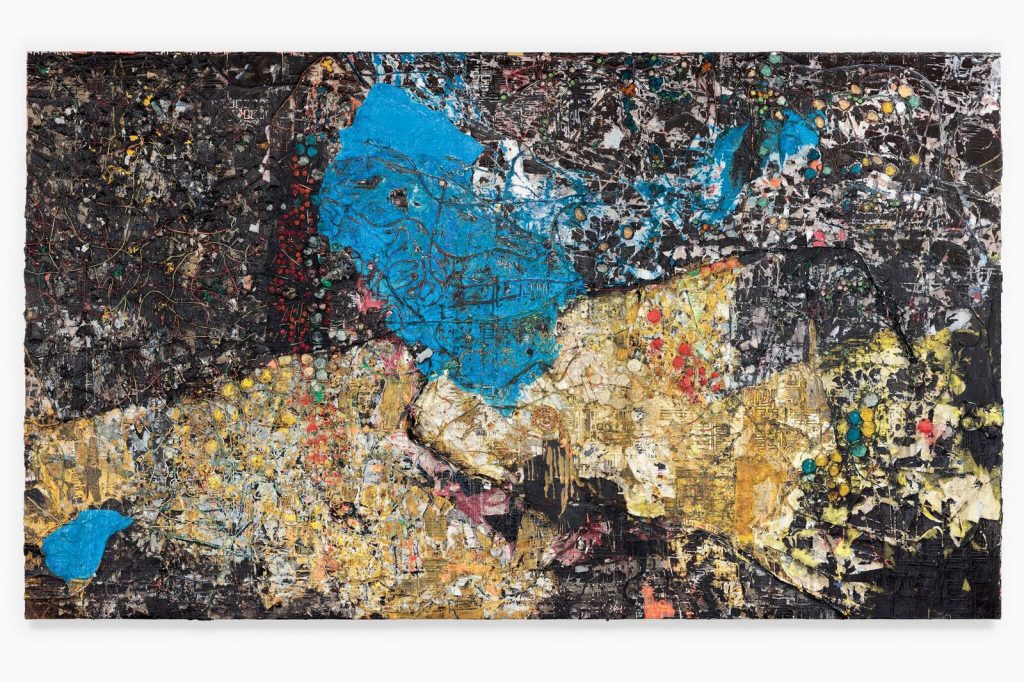 ‘Cerberus’ is an exhibition dedicated to places difficult and in-between, where conflicts arise, but also where the hope of resolution is to be found. Fundamental to these works is a process of layering. Just as the very fabric of each painting is formed from strata of pigmented paper which are scored, lacerated and stripped away, Bradford collides a multiplicity of references. The longer timeline of myth-making combines with events from more recent history and a trajectory of painting from the Hudson River School to Robert Rauschenberg via Asger Jorn. One of the universal themes which the artist has explored throughout his career, namely the distribution of power within societal structures and the impact on the individual, comes to the fore again in this exhibition. As Bradford explains, ‘I have always been interested in pulling the world that exists beyond the studio walls, and outside the art world, into the work.’ The titles ‘Cerberus’ and ‘Gatekeeper’ (2019) make metaphorical reference to notions of containment, of pressure building to an incendiary point, and also the idea of a border as a juncture or gathering place. 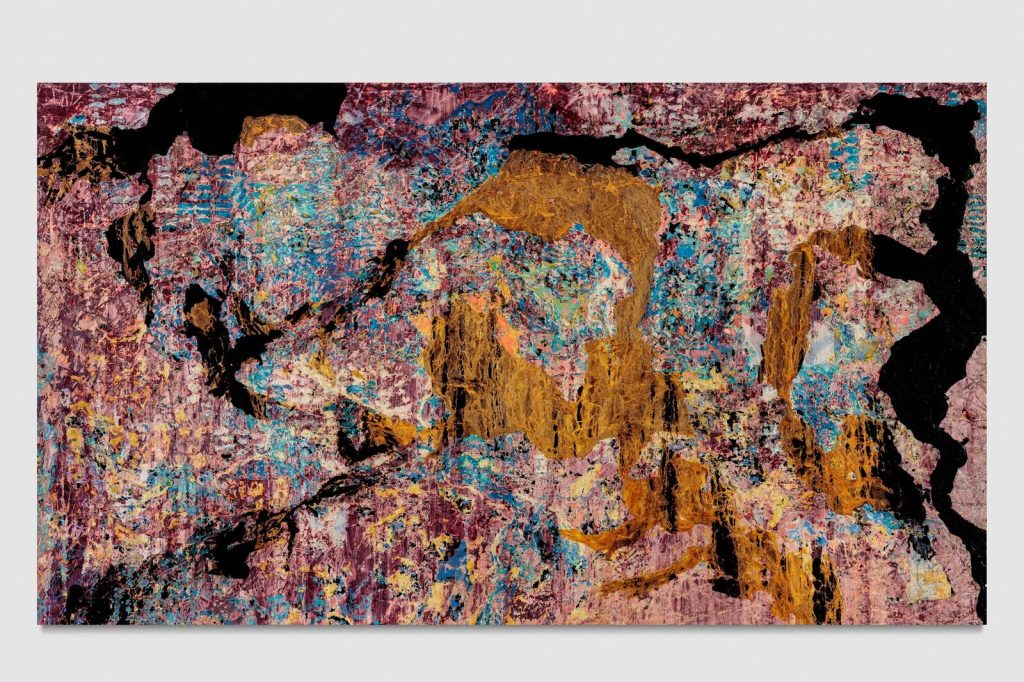 Bradford’s distinctive vernacular eschews literal readings, yet a point of departure in developing the new works is the riots in Los Angeles known as the Watts Rebellion, which flared up in August 1965 and raged over six days. The process of mining archive material unearthed a report on the riots commissioned by the California Governor’s office in 1965. Entitled ‘Violence in the City – An End or a Beginning?’, it reveals the subjective nature of attempts by those in positions of power to rationalise both the social injustice which was a catalyst for the riots, and the resulting police brutality inflicted on the black community. Bradford has long been interested in the ways in which populations, and particularly marginalised communities, are contained through the infrastructures of the urban environment. Map-like grid motifs, a recurrent theme in the artist’s work, emerge in the monumental work ‘Cerberus’ (2019), creating an interplay between soaring aerial viewpoints and the pictorial space which extends out on a horizontal axis. A series of red ‘hot spots’ embedded into the surface of these paintings evoke the intensity of a tipping point, the ignition that occurs when a barrier is breached. 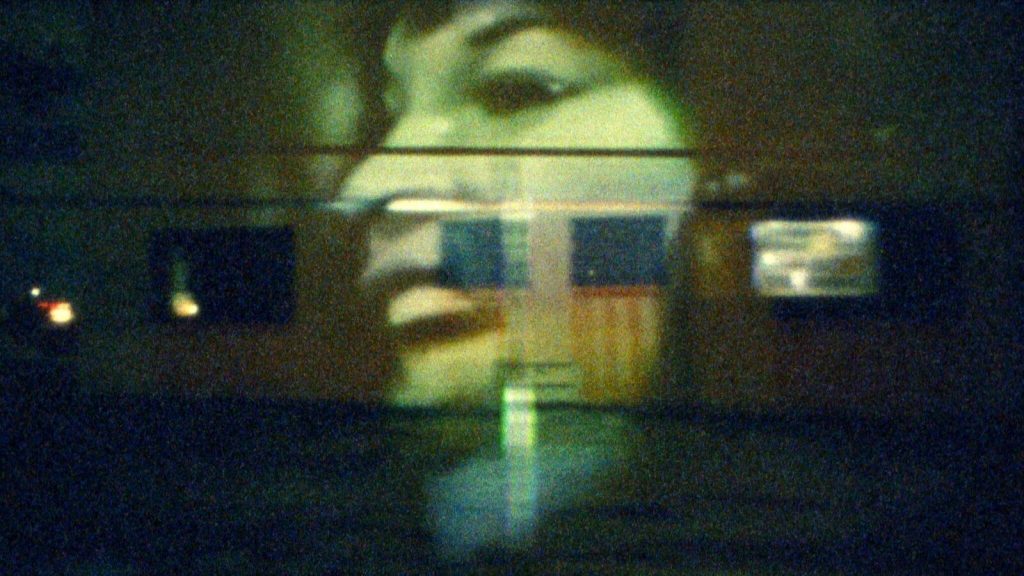 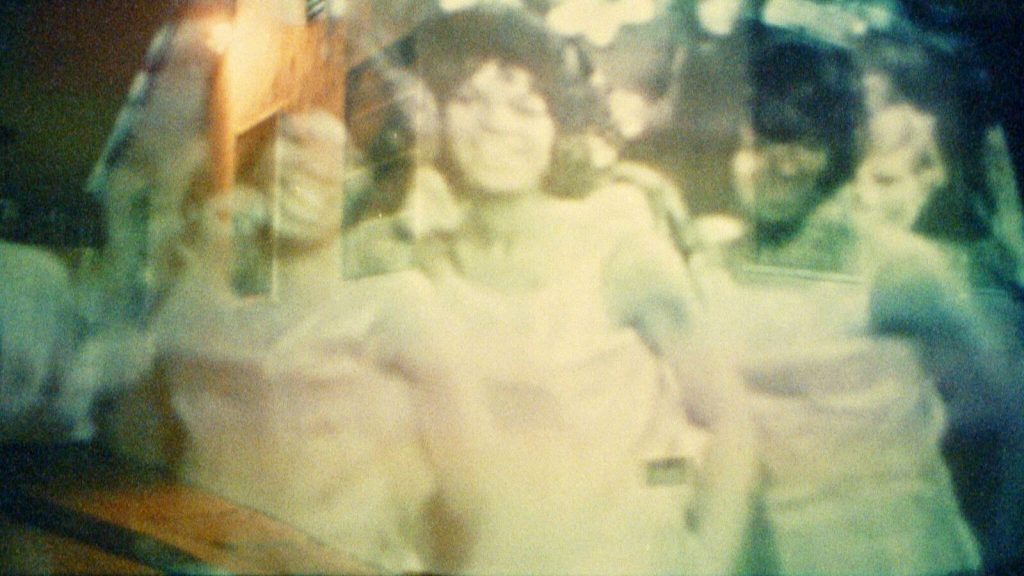 The fabric of the city of Los Angeles is central to the video installation ‘Dancing in the Street’ (2019), which features the iconic song penned by a trio of songwriters including Marvin Gaye, and was recorded by Martha and the Vandellas in 1964. Given the context of the civil rights movement and riots at the time the hit song was released, Dancing in the Street took on renewed significance as a call to action when many took to the streets protesting for social change. For this project, images of the three women and the audience are layered over the urban landscape to haunting effect. To create the video, black-and-white footage of the band’s live performance was projected from a van onto the landmarks of the industrial area of South Los Angeles where Bradford’s studio is located. ‘Dancing in the Street’ (2019) has a timeline which takes in more than five decades of history, and invites consideration of the civil unrest that shaped the intricacies of the city out of which the song emerged.

The topological markers of the city increasingly dissolve as Bradford continues towards resolute abstraction as seen in the painting ‘A five-thousand-year-old laugh’ (2019). The works featured in the exhibition share a marked fluidity of form and composition as the artist further develops a visual language rooted in his visceral approach to his materials. The resulting surfaces are alive with webs, intersecting networks and liquid reflections which Bradford has described as ‘ghosts of an interaction’. They bring to mind a language of European painting, in particular, the work of the CoBrA artists that Bradford encountered during the period he lived in Amsterdam in his twenties. Here his ability to bring about a form of ‘alchemy’ in his works is apparent; they undergo a transformation as if subject to the searing intensity of a chemical reaction or a process of oxidation.

About the Artist
Born and raised in Los Angeles, California, Mark Bradford (b. 1961) is best known for his large-scale paintings that explore the socio-political potential of abstraction through a rigorous approach to painting. Bradford’s ongoing practice, self-described as ‘social abstraction,’ examines political and environmental conditions that continue to disproportionately affect the most marginalised populations. Within both historical and contemporary frameworks, Bradford has created a significant body of work that elucidates these issues, such as the AIDS epidemic, the misrepresentation and fear of queer identity, and systemic, institutionalised racism in America. Recycling ‘tools of civilisation’ — merchant posters, newsprint, comic strips, magazines, billboards and endpapers — many of Bradford’s works are created by layering materials and pop culture ephemera to fuse social indexes and cultural spheres, a technique he has used since graduating from the California Institute of the Arts in 1997.

Bradford has been widely exhibited internationally and is the recipient of numerous awards including the U.S. Department of State’s Medal of Arts in 2014, his appointment as a National Academician in 2013, and
a MacArthur Fellowship Award in 2009. In 2017, Bradford represented the US at the 57th Venice Biennale
with ‘Tomorrow Is Another Day,’ and in November that same year, Bradford unveiled ‘Pickett’s Charge,’ a
monumental, site-specific installation for the Hirshhorn Museum and Sculpture Garden in Washington, DC. In 2018, Bradford was commissioned to create a site-specific work for the new US Embassy in London. Entitled ‘We The People,’ the work is comprised of 32 panels, each 10 square feet, featuring select text from the United States Constitution. Bradford’s current exhibition, ‘Los Angeles’, is at The Long Museum in Shanghai from 27 July until 13 October 2019.