von ammon co is pleased to present an exhibition of sculptures by Helmut Lang, the artist’s first show in Washington, DC. 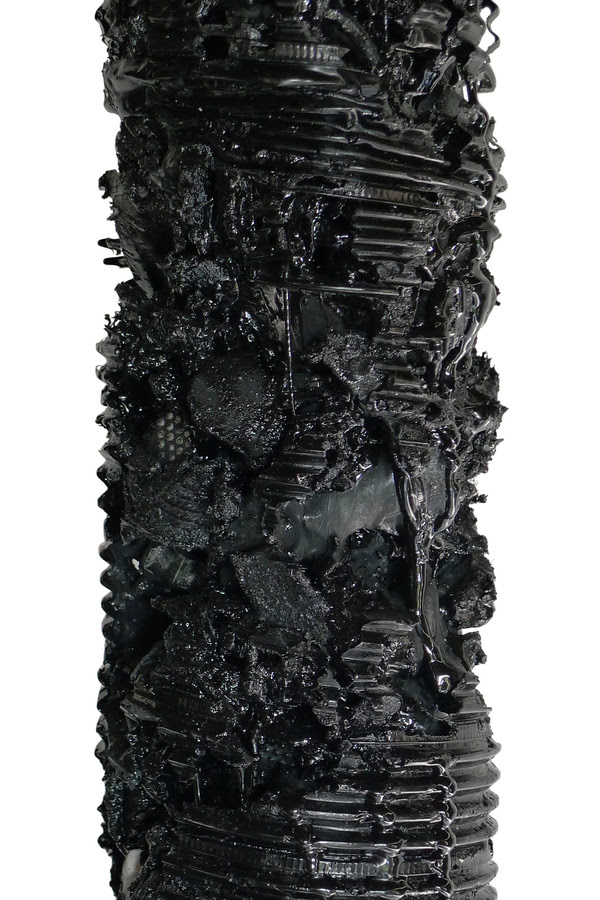 The exhibition will consist of over fifty sculptures which share a common medium: a multitude of shredded and crushed objects and materials suspended in pigmented resin. Waifish, crusted pillars arranged in a loose grid stand freely in seeming precarity, with small gaps between one another through which the viewer may travel. This particular installation of Lang’s work is simultaneously the most immersive and most minimal to date.

This loamy, fibrous sculptural composite material consists of Lang’s destroyed design archive. Leaving a previous career behind, the artist staged an intentional cataclysm and has been making new work from its wreckage ever since.

Lang’s work is a disavowal of the illusion of time as periodic, tidy and rational. The sculptures on view portray history as entropic and digestive, a suggestion that the truest character of forms is their tendency to dissolve and transform through time.

Born in Vienna 1956, Helmut Lang lives and works in New York and on Long Island.? In 2004, Lang walked away from a groundbreaking career in fashion for good to pursue his original calling as an artist. Hailed for the rigorous and direct ethos of his forms and choice of materials, he has been met with similar acclaim for his art.

Since 2005, Lang has permanently turned away from creations in direct context with the human body, and has since turned his focus exclusively to two and three-dimensional artworks which subtly allude to notions of the figure using different mediums such as sculpture, wall pieces, installations and videos, predominantly built from found and readily available materials.

In his former occupation, he left an everlasting imprint on contemporary culture and how it is communicated by redefining fashion codes and the modus operandi. His undeniable influence continues to reverberate to the present day.

He simultaneously produced his own artwork while collaborating and exhibiting with different artists, most notably with Louise Bourgeois and Jenny Holzer, which has broken collateral ground in the recent resurgence of collaborations between fashion and art.

von ammon co is a contemporary art gallery in Georgetown, Washington DC. The gallery is open Tuesday through Saturday, 11am – 6pm and is located at 3330 Cady’s Alley Northwest.