In the name of the beauty of the planet, Guerlain looks to the future as it presents its new exhibition, Gaïa, what are you becoming? between 18th October and 8th November 2019 in its historic boutique, Guerlain House, at number 68, the Champs-Élysées.

Part of FIAC’s ‘Private Itinerary’ since 2006, this annual event is a celebration of the long-standing links between Guerlain and the contemporary arts scene. The exhibition Gaïa, what are you becoming? brings together around twenty artists from all over the world who will shine a light on the precarious state of our natural world.

A tribute to Gaia, goddess of the Earth in the Greek pantheon, the exhibition is a call to recognize that we all have a responsibility to act, confronted as we are by a challenge that concerns every one of us: protecting our planet to ensure the generations that come after us have a future to look forward to.

The twenty or so participating artists take different approaches, some offering a lyrical paean to the wonders of nature, others condemning the impact of unbridled, reckless human activity upon the environment. Whatever their perspective, all seek to highlight the urgent need to re-examine how we relate to this world. Around thirty works by up-and-coming creatives and giants of the international arts scene rub shoulders in a pluri-disciplinary exhibition spread out over The House of Guerlain’s three floors, including installation art, photography, paintings and video.

Since 2006, Guerlain, in partnership with the FIAC, has put on a show to be remembered in the shape of an exhibition devoted to the cutting edge of the contemporary arts scene at the FIAC’s ‘Private Itinerary’. Characterized by a wide range of styles, multitudinous media and multi-faceted themes, Guerlain’s twelve previous exhibitions have been a roaring success.

They’ve also been notable for their public profile, which has gradually grown over the years. Every year, Guerlain has centred this exhibition around a number of extremely successful partnerships with galleries in France and further afield, the most famous of which include Templon, Odile Ouizeman, Xippas, Nathalie Obadia, Thaddaeus Ropac and Suzanne Tarasieve, not to mention public bodies like l’Institut d’art contemporain – Villeurbanne/Rhône Alpes and the Centre National des Arts plastiques. 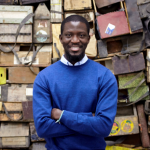 Ibrahim Mahama, one of the most exciting artists to emerge from Ghana in recent years, reflects on the notion of Parliament and what form it can take in the 21st century in his new film HOW TO BUILD A PARLIAMENT WITH A LITERAL POOL OF IDEAS