Opening this week a major show for the summer, Stuart Semple’s ‘Dancing on My Own: Selected Works 1999 – 2019’. Curated by Lee Cavaliere. ‘Dancing on My Own’ will be the artist’s first London show in over five years, bringing together paintings, sculptures, digital pieces and moving image work spanning 20 years of his career – and encompassing themes and elements taken from the many global exhibitions and projects created in that time. 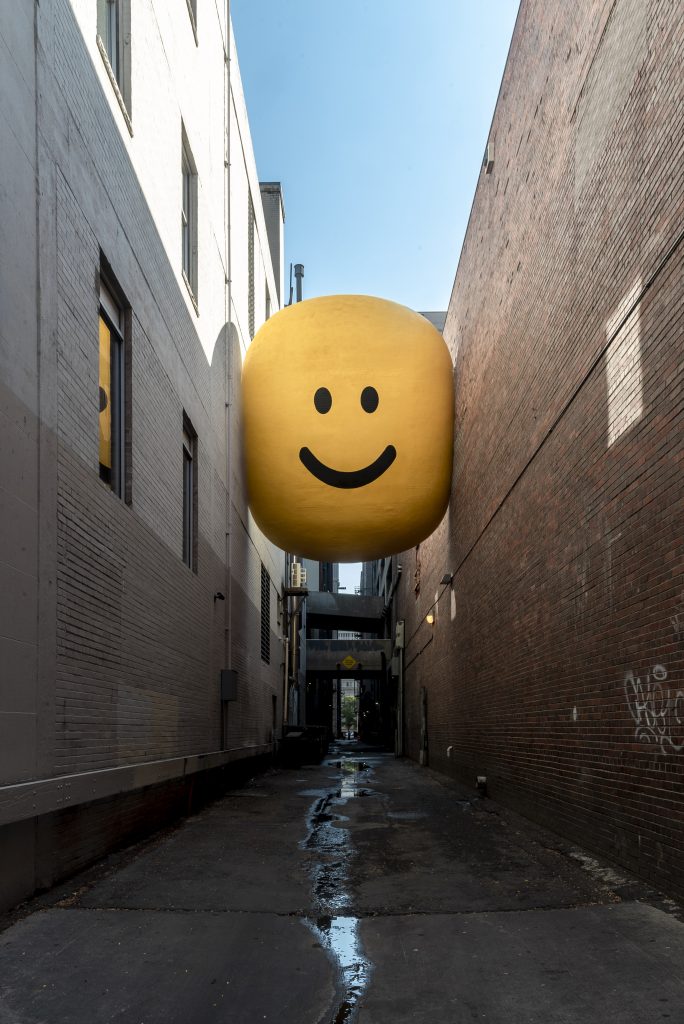 I should be crying but I just can’t let it show, part of Happy City Stuart Semple’s city-wide art project in Denver (c) Stuart Semple

While the exhibition takes in some of his better-known works, including Happy Cloud, the ‘Kapoor Art War’, Pounding Outside Poundland and All about the Cheddar, it also explores his lesser-known paintings, sculptures, internet works, film pieces and early drawings – many of which have never been seen before.

Stuart is well-known for making thematic collections of works around distinct topics, which have been the basis for 15 solo exhibitions around the world. But this exhibition will be the first time that central works from a range of different projects have been assembled in a single space. Through this, we are presented with a unique opportunity to explore the wider underlying and unifying philosophies across seemingly disparate elements within the artist’s wider body of work. While the exhibition takes in some of his better-known works, including Happy Cloud, the ‘Kapoor Art War’ and Pounding Outside Poundland, it also explores his lesser-known paintings, sculptures, internet works, film pieces and early drawings – many of which have never been seen before. 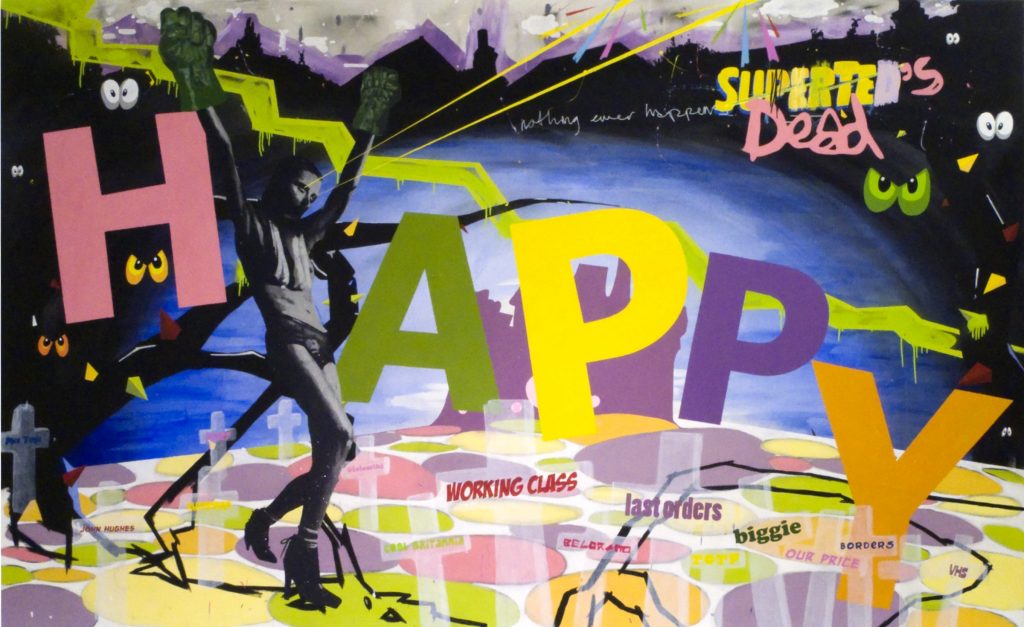 “Stuart Semple a singular and diverse talent, whose work as an artist has driven his activism. This is a fantastic opportunity to see the common threads in his broad and varied work, over the past two decades.”

This exhibition aims to navigate the winding and at times perilous road the artist’ work, and life, have taken over the last 20 years. One could say that the artist’s career began when his life ended, as he flatlined from a mysterious allergic reaction as a teenager. The months spent in hospital, the resultant fear, anxiety and feeling of being on a mortal knife-edge; these each drove Semple to embark on a prolific image-making career beginning with proliferation on eBay and spanning painting, sculpture, print, film, audio, the written word and social activism.
You’ll see elements of this journey through the exhibition; the terror and power of the medical environment; the boundless curiosity and humour that drives his practice; the dark places visited en route and the generosity of an artist whose work challenges walls, encourages dialogue and continues to laugh in the face of death.

The works have a nostalgic naivety when referencing the 80’s pop-cultural world of his youth, and this is often re-cast into new discordant narratives, commenting on the culture of the present day alongside his personal obsessions with the image world, isolation, technology and anxiety.
It was 20 years ago that he sold his first work over eBay, and for three years his pieces were being shared on the site at a manic rate of three a night. Eventually disseminating almost 3000 pieces to collectors and friends around the globe, he discovered that there was a community on the internet and that he wasn’t alone. Many of the themes that these early cathartic works touch upon re-emerge in different forms across his later works. Several of these early pieces will be included in the show.
Overall, the trajectory of his work evolves in parallel to the growth of digital and online spaces, the radical shifts in British politics and a crisis in masculinity which sees the number one cause of death for young men in this country being suicide. Often strong discussions emerge around the impact of social media on mental health and the impact of digitization on the physical experience of the arts. 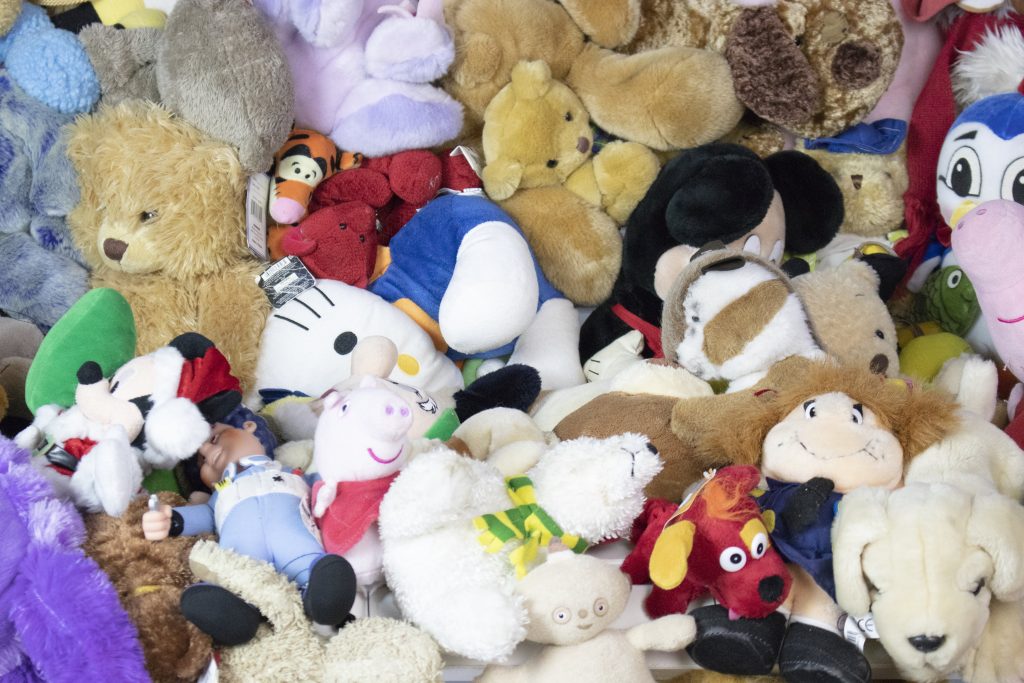 “It’s hard to live in a world like this and not want to reflect it, then do something about it. I know in my heart that artists are useful, and I hope some of the things I’ve done have helped somehow somewhere. It’s lovely to see the artworld opening up and becoming more inclusive and accessible, but sadly there’s a hell of a long way to go when it comes to class.” 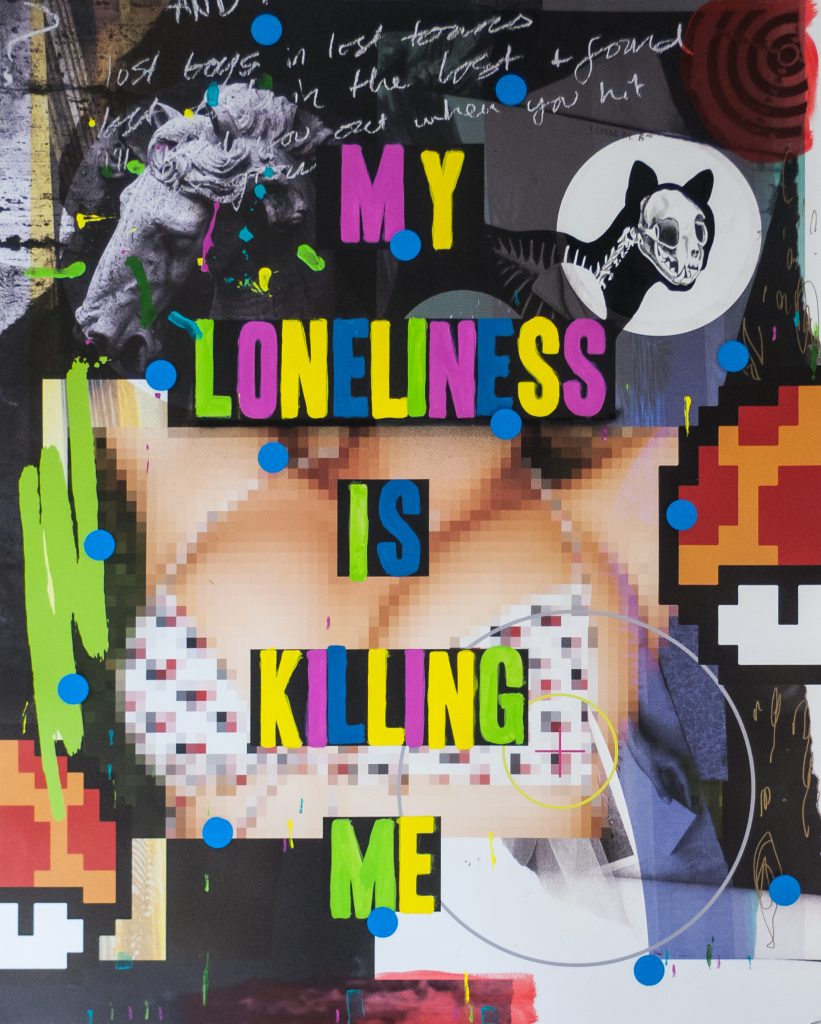 My Loneliness is Killing Me (c) Stuart Semple

All the pieces speak of an unwavering belief in art’s ability to elevate, connect and empower – and through them the artist is clear in his presentation of art as a mechanism for greater social cohesion and increased happiness.
When taken together, the overall output speaks strongly to the idea of the social function of the artist and strong belief in the role of art and artists be relevant and useful to society.

Often his pieces speak to the elitism and exclusion he experienced as a working-class kid from suburbia, looking in on art from the outside. He deals with this most famously in his online performance project ‘The Pinkest Pink Art War’, in which he challenged the monopoly gained by fellow artist Anish Kapoor over the world’s blackest black paint. In this context, the works – especially those of a digital, ephemeral nature – can been seen as ways to connect an inclusive global online community, around the ideas of accessibility and democracy. 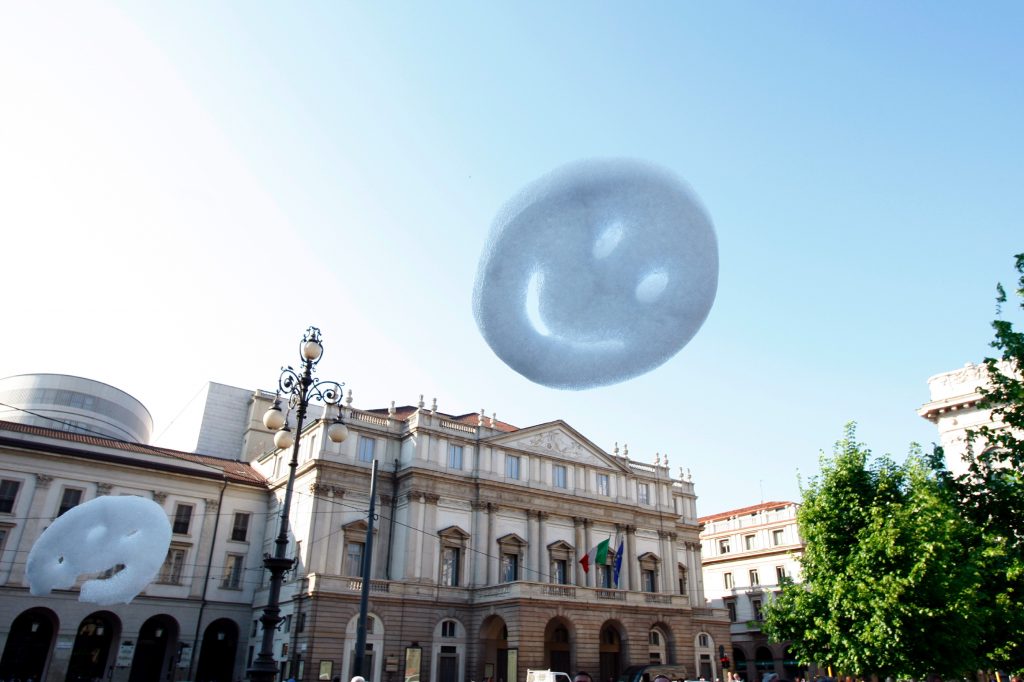 In recent years, Stuart’s overarching concerns for social cohesion and wellbeing has been addressed in numerous public art projects around the world, from his global #HostileDesign campaign to his Happy Cloud project, inaugurated in 2009 at the height of the recession. Bored with ‘credit crunch’ headlines and London’s depressive atmosphere, the artist launched ‘Happy Clouds’ from Tate Modern, flooding the skyline with eco-friendly artificial clouds in the shape of smiley faces, for a piece that has subsequently been repeated around the globe and which has earned him a Happiness Hero medal, awarded by the UN on the first international day of happiness. This work was pivotal to his continuation of explorations into happiness, connection art and community over the years – including the city-wide, summer-long ‘Happy City Denver’, which saw the installation of his permanent sculpture I Should be Crying but I Just Can’t Let It Show, which will itself be recreated for this exhibition.

About The Artist
Stuart Semple is one of the UK’s leading post YBA artists, perhaps best known for his ‘Happy Cloud’ performance from Tate Modern, where he flooded the London skyline with artificial, eco clouds in the shape of smiley’s during the 2009 recession. Following this, the performance has been repeated in Moscow, Manchester, Milan, Australia, Denver & Dublin.
Semple has held 15 critically acclaimed solo exhibitions internationally in Hong Kong, New York, Los Angeles and Milan. He has featured in over 50 group exhibitions alongside artists such as Peter Doig, Basquiat, Warhol, Richard Prince, Ai Wei Wei and The Chapman Brothers. He has been featured across the media in The Times, Modern Painters, Italian Vogue, iD, Financial Times and many others. He has presented for the BBC and spoken at Oxford University, ICA, Denver Art Museum, Southbank Centre & Irish Museum of Modern Art.
Most recently, Semple has been embroiled in what has become known as the ‘Art Wars’, which started when artist Anish Kapoor secured the exclusive rights to use Vantablack, the blackest substance on earth, meaning that no artists would be able to use the pigment. This sparked Semple’s imagination and compelled him to create an elaborate piece of internet performance art, tackling the themes of accessibility, equality and elitism head-on – starting with the creation of the ‘Pinkest Pink’, available to all but Kapoor.
Last year, Semple’s ‘Happy City’ project took over the city of Denver, incorporating a series of large-scale public artworks, installations, immersive experiences and his participatory exhibition ‘Happiness HQ’. He is currently working on an iteration of the project with the Hong Kong Art Centre for September 2019.
Semple has been honoured as a UN Happiness Hero, a distinction given to mark the first UN International Day of Happiness on 20th March 2013. Stuart is also an ambassador for Mind, the mental health charity.

Stuart Semple today unveiled ‘NO SHOW,’ an exhibition without any artwork except one half-primed canvas. A comment on the financial and mental barriers to artists making work during these times.