Gagosian is to present a series of paintings by the Chinese-born French artist Zao Wou-Ki (1920–2013). The exhibition pays homage to the close, enduring friendship between Zao Wou-Ki and the Chinese-American architect I. M. Pei (1917–2019).
Throughout his career, Zao Wou-Ki merged Eastern and Western aesthetic traditions in his paintings, retaining technical elements of Chinese painting styles while embracing European Modernism. As a student in China, he studied ink drawings and classical Eastern painting. In Paris, where he moved in 1948, he continued exploring Impressionism and Expressionism. Inspired by Paul Klee and his appreciation of Eastern art, Zao Wou-Ki began to seriously contemplate nature in his own work, and to incorporate traditional Chinese calligraphy into his evolving artistic language. 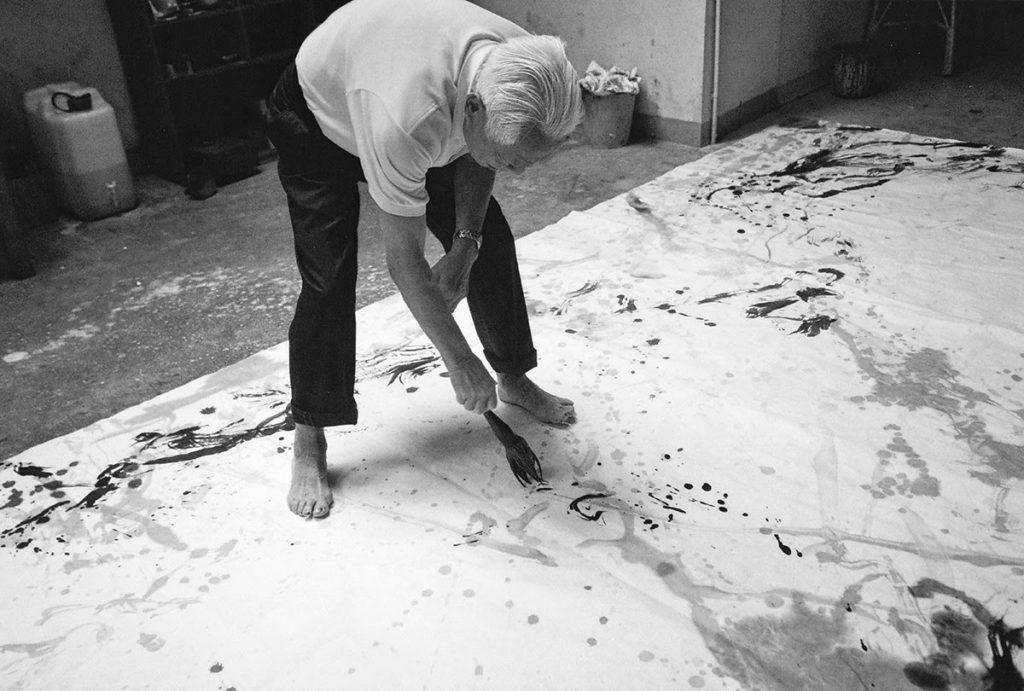 The earliest works in this exhibition, made in 1979 and 1980, were commissioned by Pei and served as prototypes for a series of ink works that followed. The remaining seven paintings on view—in India ink on paper mounted on canvas, and from 2006—employ the same medium, with their free-flowing brushstrokes applied in a subtle yet concentrated method.

Zao Wou-Ki’s gestures in these ink works are rapid, appearing spontaneous yet attesting to his masterful control of mark making. The entire series is untitled, removing the interplay between brushstrokes and specific ideas. Zao Wou-Ki created these works by laying the absorbent white paper flat on the floor and painting from above, allowing the thin black ink to drop, with controlled use of gravity, onto its support, and in doing so, forming a link between Abstract Expressionism and traditions of Chinese ink painting and calligraphy. In one work, gestures progress vertically across the canvas, underscoring the tenacity of each stroke, while in another the ink is concentrated toward the right side before bursting across the canvas in a flurry of vertical lines. Zao Wou-Ki’s compositions present a delicate balance, harboring moments of risk within an exploration of abstraction, exploding onto the paper at different velocities as if tracing the artist’s innermost impulses and desires.
Zao Wou-Ki was born in Beijing, China, in 1920 and died in Nyon, Switzerland, in 2013. Collections include the Solomon R. Guggenheim Museum, New York; Museum of Modern Art, New York; Metropolitan Museum of Art, New York; San Francisco Museum of Modern Art; Carnegie Museum of Art, Pittsburgh; Hirshhorn Museum and Sculpture Garden, Washington, DC; Tate Modern, London; and Centre Pompidou, Paris. Recent exhibitions include Fondation Pierre Gianadda, Martigny, Switzerland (2015–16); No Limits (organized by Colby College Museum of Art), Asia Society Museum, New York (2016–17; traveled to Colby College Museum of Art, Waterville, ME, in 2017); Musée Marmottan Monet, Paris (2016); Musée Cernuschi, Paris (2016); and L’espace est silence, Musée d’Art moderne de la Ville de Paris (2018–19). Zao Wou-Ki was awarded the Praemium Imperiale Prize for Painting in 1994. In 1993, he was named a Commandeur de la Légion d’Honneur, and he was made Grand Officier de l’Ordre de la Légion d’Honneur in 2006 by the French President Jacques Chirac. He was elected Member of l’Académie des Beaux-Arts in 2002.
#ZaoWouKi