This is the first exhibition in Europe of established contemporary artist and activist Nick Cave. - FAD Magazine
Skip to content

Tramway presents the first exhibition in Europe of established contemporary artist and activist Nick Cave who lives and works in Chicago. Cave his renowned for his Soundsuits, ornate figurative sculptures that can be worn and performed. An artist whose work has been driven by the social and personal impact of racism for close to three decades, Cave created his first Soundsuit as a form of both camouflage and symbolic body armour, an insulating layer of accumulated materials and meanings. 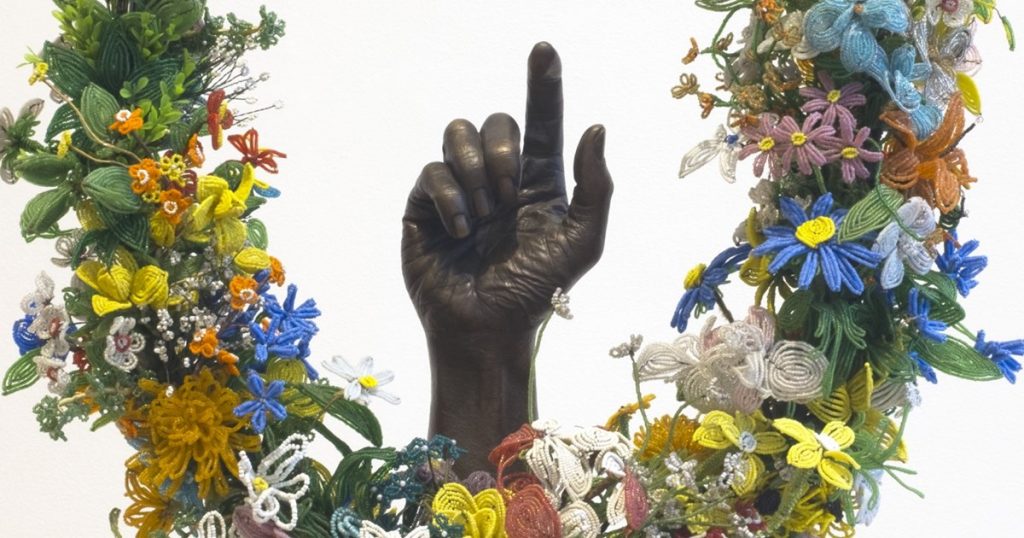 Cave’s meticulously crafted sculptures feature a sensorial array of materials often found in craft, kitsch, or folk contexts, while the forms and materiality of the work reference the outfits and celebrations of Mardi Gras parades, drag performance, and shamanistic or ritual costumes. Cave has been gathering this material for years ranging from antique toys, ceramic birds, fruit and animals, buttons, festive decorations, pompoms, crochet blankets, gramophones and pony beads. These objects are woven into cacophonous, politically urgent works in which Cave reframes and reclaims American racist memorabilia which the artist has spent the last decade removing from circulation at shops and yard sales.

At Tramway Cave presents Until, his largest and most ambitious project to date, organized by MASS MoCA in North Adams, Massachusetts and co-produced with Carriageworks, Sydney and Crystal Bridges/The Momentary, Arkansas. Until is made up of thousands of found objects and millions of beads, creating a rich sensory tapestry, akin to stepping directly inside the belly of one of his iconic Soundsuits. The sheer volume of material is astounding — 16,000 wind spinners; millions of beads; thousands of ceramic objects; more than 10 miles of crystals; 24 chandeliers; 1 crocodile; and 17 cast-iron lawn jockeys (racist souvenirs from America’s Jim Crow era). Tramway’s vast main gallery is filled with a cacophonous, sculptural field of kinetic ornaments leading to a large-scale crystal cloud topped by a sculptural garden inspired by the artist’s question “is there racism in heaven,” before ending with a series of beaded murals hand-woven with thousands of colourful beads, and embedded messages within.

Though opulent and celebratory, the exhibition remains firmly connected to the political impetus behind Cave’s ongoing body of work. Until is a space where alluring kinetics and sumptuous materiality gives way to stark images, referencing complex issues of gun violence, racial profiling and gender politics that currently divide the United States of America, and the extension of these matters in communities around the world.

Until is more than an exhibition, it is a platform. Of this, Cave states: “I view this work as an elaborate community forum, as much as a work of sculpture.” As such at Tramway Until will become a space for local artists and community groups to present their own responses to the exhibition throughout its duration. With this act of generosity and platform building, Cave reinforces his personal commitment to engaging with the diverse and complex communities that constitute our society and to interrogating the truth and fragility of our own histories and communities, our belief systems and our systems of justice.

Until, is organized by MASS MoCA in North Adams, Massachusetts and co-produced with Carriageworks, Sydney and Crystal Bridges/The Momentary, Arkansas. Major exhibition support was provided by Jack Shainman Gallery and Beadcraft. Curated by Denise Markonish MASS MoCA and for Tramway by Claire Jackson.

About The Artist
Nick Cave is an artist, educator and foremost a messenger, working between the visual and performing arts through a wide range of mediums including sculpture, installation, video, sound and performance. Born in Missouri in 1959, Cave studied at the Kansas City Art Institute and the Cranbrook Academy of Art in Michigan, and trained with the renowned Alvin Ailey American Dance Theatre. Public collections include the Auckland Art Gallery, Brooklyn Museum (New York), Crystal Bridges Museum of American Art (Arkansas); the Detroit Institute of Arts (Michigan), the High Museum of Art (Georgia), the Hirshhorn Museum and Sculpture Garden (Washington, D.C.); the National Gallery of Victoria (Melbourne); the Norton Museum of Art (Florida); the Museum of Modern Art (New York). The Birmingham Museum of Art (Alabama)l the De Young Museum (California); the Museum of Fine Arts, Boston (New York); the Museum of Fine Arts, Houston (Texas); the Orlando Museum of Art (Florida); the Smithsonian Institution (Washington, D.C.0; and the San Francisco Museum of Modern Art (California), among others. Cave is Professor and Chairman of the Fashion Department at the School of the Art Institute of Chicago. Recent major exhibitions include The Let Go (2018) at Park Avenue Armory, New York and Rescue (2017) at the Pennsylvania Academy of the Fins Arts, Philadelphia.

About
Tramway is a leading international art-space which commissions, produces and presents contemporary arts projects and has been at the heart of the changes that have seen Glasgow re-born as one of Europe’s leading centres for contemporary visual arts. Based in the south of the city and a former tram depot, Tramway has a high quality, agenda-setting, experimental and dynamic programme; it is one of the most sought after and prestigious spaces in Scotland for artists to present new work. Tramway enjoys a very strong reputation for working closely with and being artist-led in its approach.