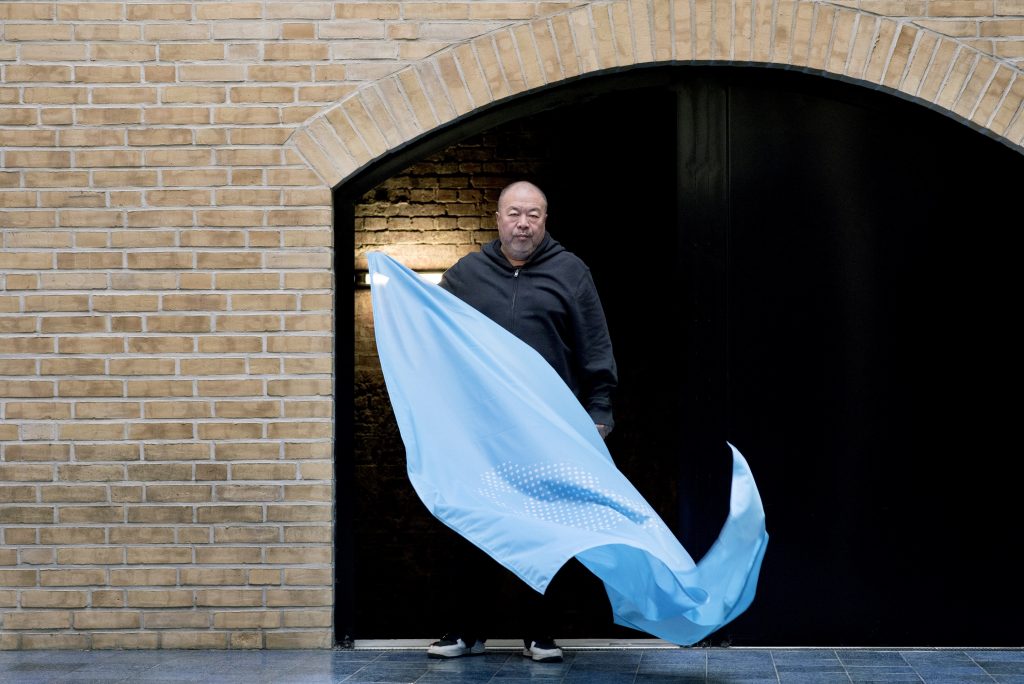 In a unique collaboration, a wide-ranging group of arts organisations and human rights charities commissioned Ai Weiwei to design a new flag in response to the real and present dangers of a world changing at break-neck speed and a community that has forgotten why human rights are so important, to offer hope and to educate generations to come about the absolute importance of universal human rights. Everyone across the country is invited to Fly The Flag for Human Rights between 24 and 30 June 2019 in events around the UK, with over 150 organisations involved.

Today at the launch of a week of activities, it was announced that Michael Morpurgo, the Champion of Fly The Flag for Children for the project, has written a new set of 12 rights for children and young people including the rights to books, technology, freedom of expression, opportunity and play. Alongside the rights, there will be a nationwide schools competition to design a poster illustrating them. Morpurgo has also written a new version of protest song Bread and Roses which was sung at today’s launch event.

The Opening Day Event at Somerset House was presented by Fuel. Audiences gathered in the courtyard to hear the 30 articles of the Universal Declaration in a specially made audio version recorded by Khalid Abdalla, Nicole Charles, Lisa Hammond and Samuel West, along with students from Thomas Tallis School for Fly The Flag, before 15 women sang articles from the Universal Declaration of Human Rights, set to music by Paul Clark, co-Artistic Director of Clod Ensemble. Michael Morpurgo also spoke at the event about the importance of human rights for young people. Following the event a 10m x 12m flag was raised to mark the start of celebrations. Photos can be found here.

Last week Ai Weiwei visited the UK and spoke to young people about Human Rights. Photos and footage can be downloaded here.

“Our human rights and fundamental freedoms are often taken for granted, all too often ignored or derided. They are always under threat. Europe has a Convention of Human Rights. The United Nations has a Declaration of Human Rights. For centuries, people all over the world have struggled to establish our rights and freedoms. It took World Wars and centuries of abuse of human rights before we could all agree that universal acceptance of our rights is the corner stone of all our freedoms, that all human rights must be adhered to, protected and cherished.

We and our children enjoy these long fought for rights and freedoms, handed down to us by our mothers and fathers, and theirs before them. They are ours now to care for, and to pass on. That is our responsibility, and responsibility goes hand in hand with rights. But each new generation has to know and be aware of the importance to our lives of these rights and freedoms. The understanding has to be renewed. The story has to be told.”

The rights in full:

‘The right for clean air to breathe.

The right for clean water, nourishing food, and health care.

The right to live on a planet, free of all pollution, and sustainable for human, animal, and plant life.

The right to live in peace, in a world free of fear.

The right to a home.

The right for time and space to play.

The right to be loved.

The right to education.

The right to books and technology.

The right to freedom of expression.

The right to be respected.

The right for opportunity for every child, regardless of ability, disability or circumstance.’

The flag is available to schools and care homes, town halls and office blocks, hospitals and libraries across the UK. They are available to purchase now, or people are encouraged to make their own using the online toolkits. Communities, groups, businesses and individuals are invited to become part of the project by signing up to organise events, workshops, talks, activities, exhibitions, or to Fly The Flag from their buildings to celebrate human rights. Schools and individuals can download the Fly The Flag creative resource packs for inspiration and simple instructions on how to make their own flags and learn about human rights. Flags can be made of anything and people are encouraged to share their creations using #FlyTheFlag70.

The original Universal Declaration of Human Rights was created by women and men who witnessed first-hand the horror and inhumanity of the Second World War and were determined that it should never be repeated. And today, through the UK Human Rights Act, this powerful idea protects the rights of everyone in this country. Human rights inspire a vision of a world free from abuse and cruelty and empowered by protecting people from state abuse and curbing the reach of society’s most powerful, ensuring that a minimum standard of safety and dignity is guaranteed to every human being. Ai Weiwei recently spoke on the importance of human rights here.

With thanks to the Donmar Warehouse for their learning resources and Writing Wrongs project, along with Thomas Tallis School and Hampstead School for their contribution to Fly The Flag.

“Weiwei is honoured to have the opportunity to design a flag for the 70th anniversary for the Universal Declaration of Human Rights. As we all come to learn, human rights are the precious result from generation after generation’s understanding of the human struggle. He is proud to be a part of this force.”