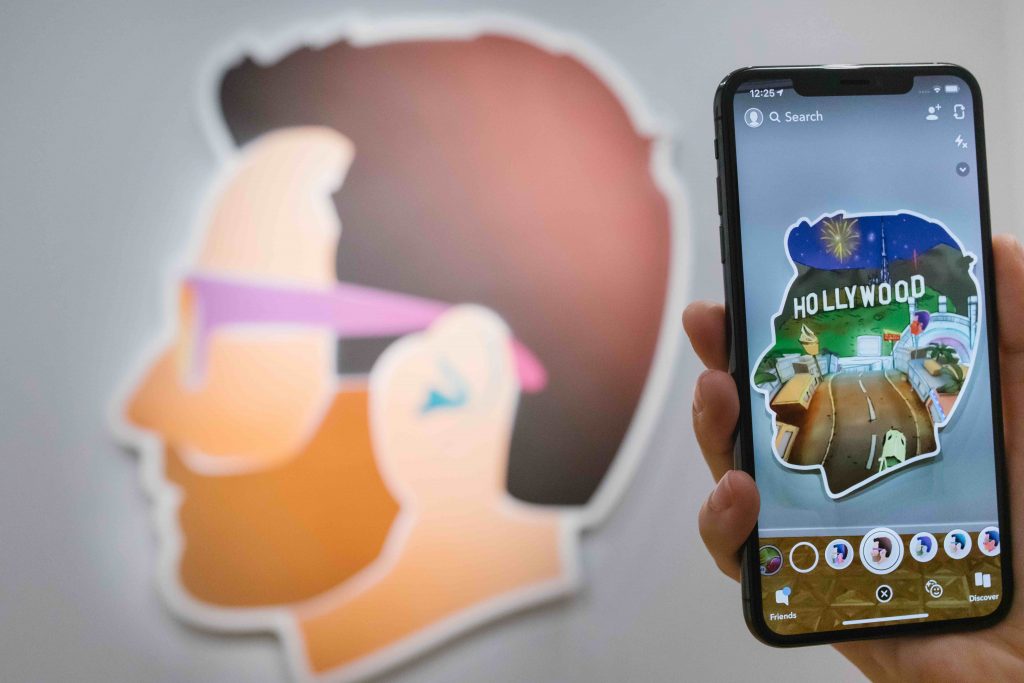 Alex Israel x Snapchat is a unique collaboration between the Los Angeles-born artist and Snap. Invited to work with Snap’s advanced augmented reality (AR) team to expand upon his multi-disciplinary practice, Israel has created five new augmented reality experiences, each linked to one of his Self-Portrait paintings. These five “Snap-Portraits,” unleashed in your smartphone, leverage Snap’s cutting-edge Lens Studio platform to overlay Snap’s groundbreaking AR onto Israel’s physical works to give viewers an entirely new experience of painting. Alex Israel x Snapchat will be on display at La Malmaison Art Centre, 17 – 21 June 2019, as part of the Cannes Lions International Festival of Creativity 2019. 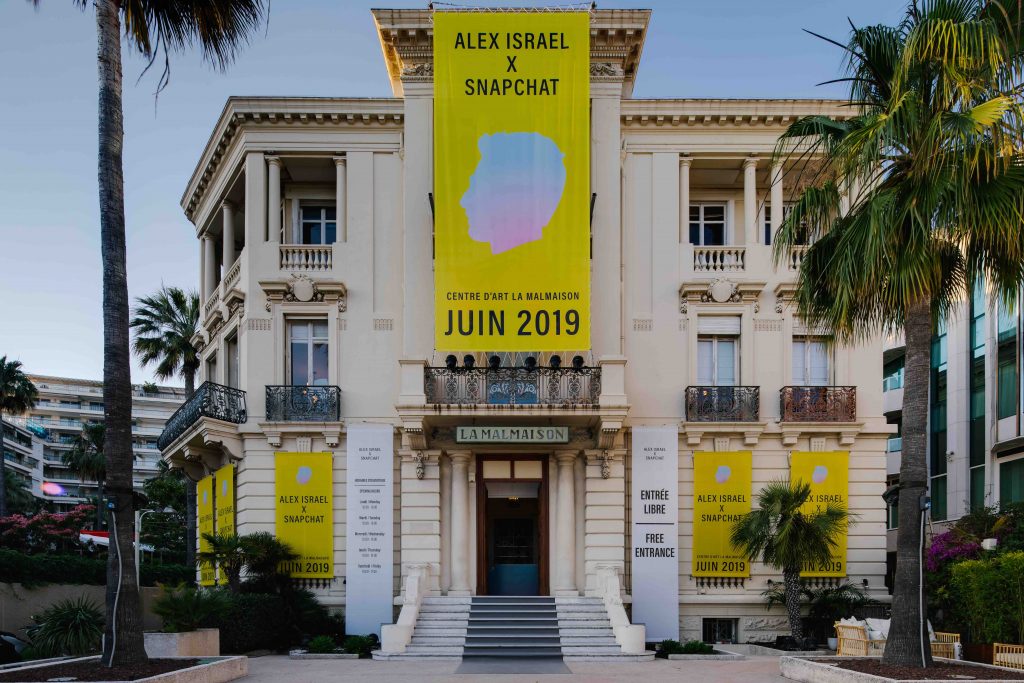 The exhibition begins with Self-Portrait (Drive), a looping, psychedelic joyride through Israel and Snap’s home base: Los Angeles. From there we encounter three ubiquitous LA details: a palm tree, a pelican by the sea, and a gym, each central to its own surreal adventure. In the final work Self-Portrait (Voicemail), Israel focuses on the smartphone at the center of his creative activity, inviting us deep inside its maze-like circuitry as the artist’s disembodied voice leaves a message after the beep.

An Alex Israel Self-Portrait Lens within Snapchat transforms exhibition visitors into their own versions of the artist’s color-blocked paintings, matching those hanging in the galleries. Meanwhile, outside the exhibition, Israel has applied Snap’s groundbreaking landmarker technology to Cannes’ iconic La Malmaison. Exaggerating the museum’s role as frame or vessel for art, Israel has repurposed the entire building as a pedestal for himself. Giant-sized and animated as a virtual sculpture, Israel’s avatar sits cross-legged above the famed facade, calmly scrolling through his phone and sending heart and happy-face Snapchat Stickers to passersby along La Croisette. 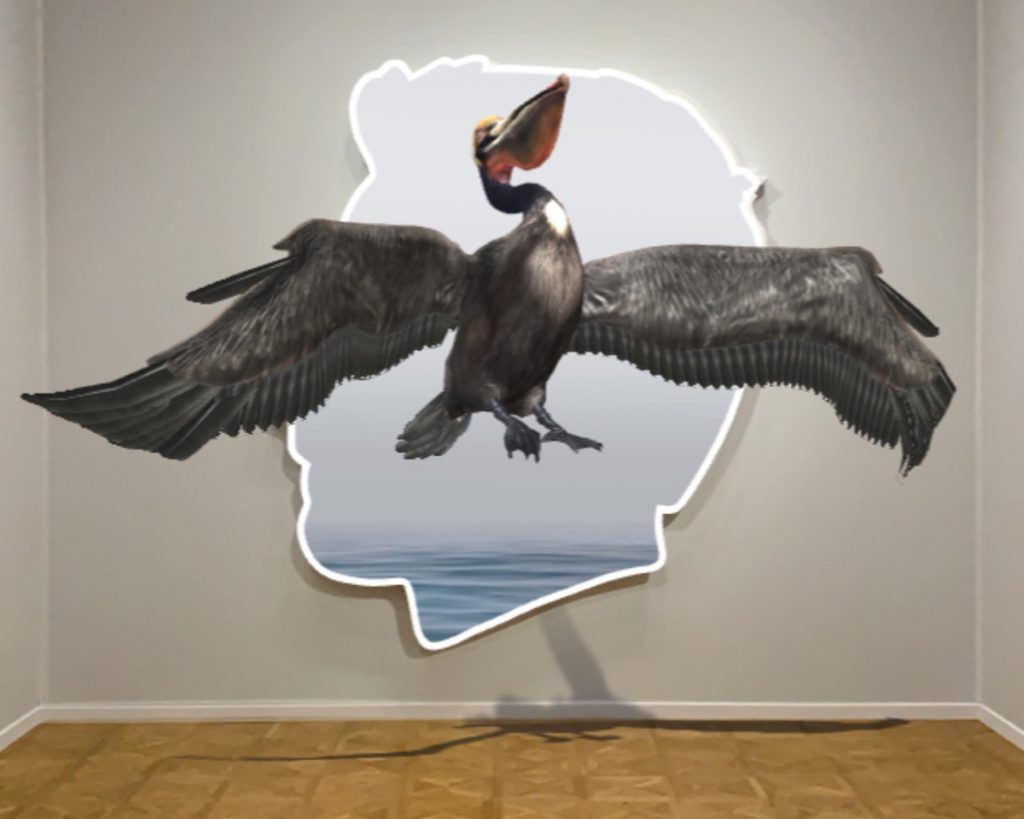 Snap’s Marker technology connects digital augmented reality (AR) in a phone to real-world objects, and is used throughout this exhibit to detect and attach content to each of Alex’s paintings.
Each installation is a different interpretation of the utilization of Snap’s Marker technology that evolves as you proceed through the gallery: the painting becomes a video screen, a portal opening to the inside of the painting, an experience which fully surrounds the user with Alex’s art, etc.
In addition, Snap’s Landmarker technology is used on the outside of La Malaison to bring the building to life. In this experience, Alex Israel appears to sit cross-legged above the famed facade, calmly scrolling through his phone and sending heart and happy-face Snapchat Stickers to passersby along La Croisette.

About The Artist
Alex Israel is a well-known contemporary Los Angeles-native artist. For the last decade, Israel’s art has embraced pop culture as a global language. Trafficking in the invisible stardust of Hollywood and the detritus of film production—backdrops, sets and props—while riding the wave of the Internet and social media—as online talk show host, eyewear and clothing designer, filmmaker and hologram—Israel’s art practice doubles as a brand, centered around a Southern Californian millennial lifestyle for which his iconic profile-in-shades-logo becomes a sly emblem, mobilized across high-visibility platforms from the worlds of art, entertainment, fashion and tech. Embedded within each of Israel’s endeavors is not only a landscape (of LA) and a portrait (of himself), but a cool and savvy meditation on a world fueled by celebrity, product placement and influence. A sort of sphinx behind dark lenses, the artist provokes an interrogation of the role of contemporary art in this new world. @AlexIsrael

On average, more than 70% of Daily Active Users play with or view Lenses every day

In just over a year, more than 400,000 Lenses were created by our community, and people played with those Lenses over 15 billion times

Snapchat reaches more 13-24 year-olds than either Facebook or Instagram in the US, UK, France, Canada, and Australia (source)

Over 3 billion Snaps are created each day

On average, more than 60% of Daily Active Users create Snaps with the camera every day snapchat.com 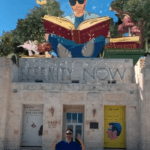