PADA studios present two new London exhibitions, at ASC Gallery and Recreational Grounds. The shows gather together the work of 12 artists in total, resulting from their residency in PADA’s industrial park in Portugal. 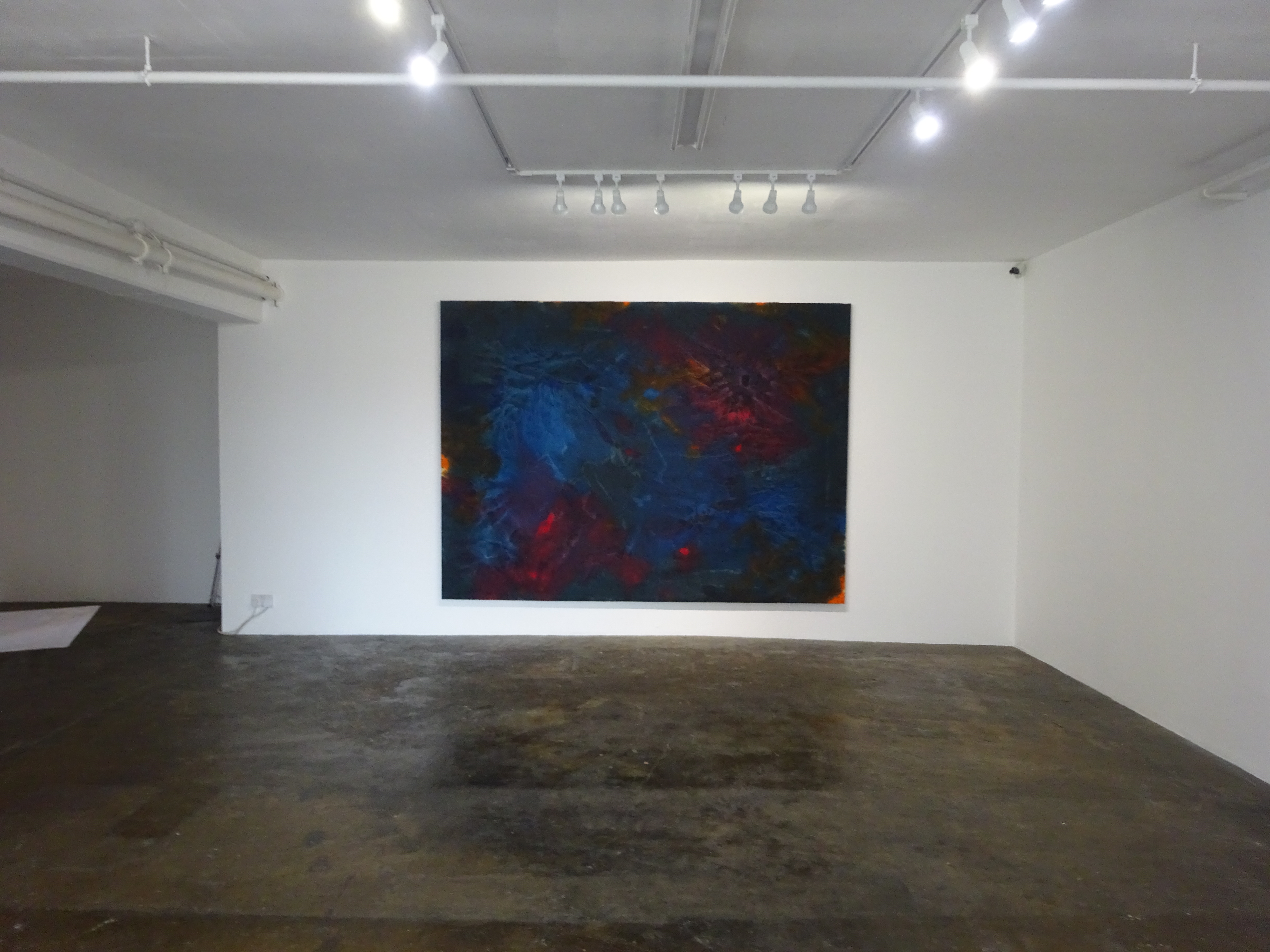 Founded by Diana Cerezino and Tim Ralston, PADA is an independent, non-profit, artist-run residency based in Lisbon’s South Bay. It offers artists and curators a quite and immervise space where to carry out their research. PADA basically provides anything an artist or curator needs, supporting them with a long term studios and gallery program.

They offer artists living in greater Lisbon area access to long term professional art studios. This also implies having access to an international network of artists, gallerists and curators. The residency gives a chance to non-resident artists to live and work in Lisbon for a certain period. The programme aims to promote exchange of ideas through artistic practice. Accommodation is provided at just 5 minutes walk from the studios. The gallery, a 100 square meters space, serves as dedicated gallery and project space. PADA also offers a variety of satellite locations throughout the industrial park for interventions, installations and events. PADA curate their own monthly programme of exhibitions as well as hosting projects and accepting proposals from curators and artists looking to explore the facilities.

Located within an industrial park, whose past dates back to 1885, artists are surrounded by a rich history. The area is also characterised by a variety of contemporary craftsmen, providing inspiration, material knowledge, and the resources for experimentation and production. 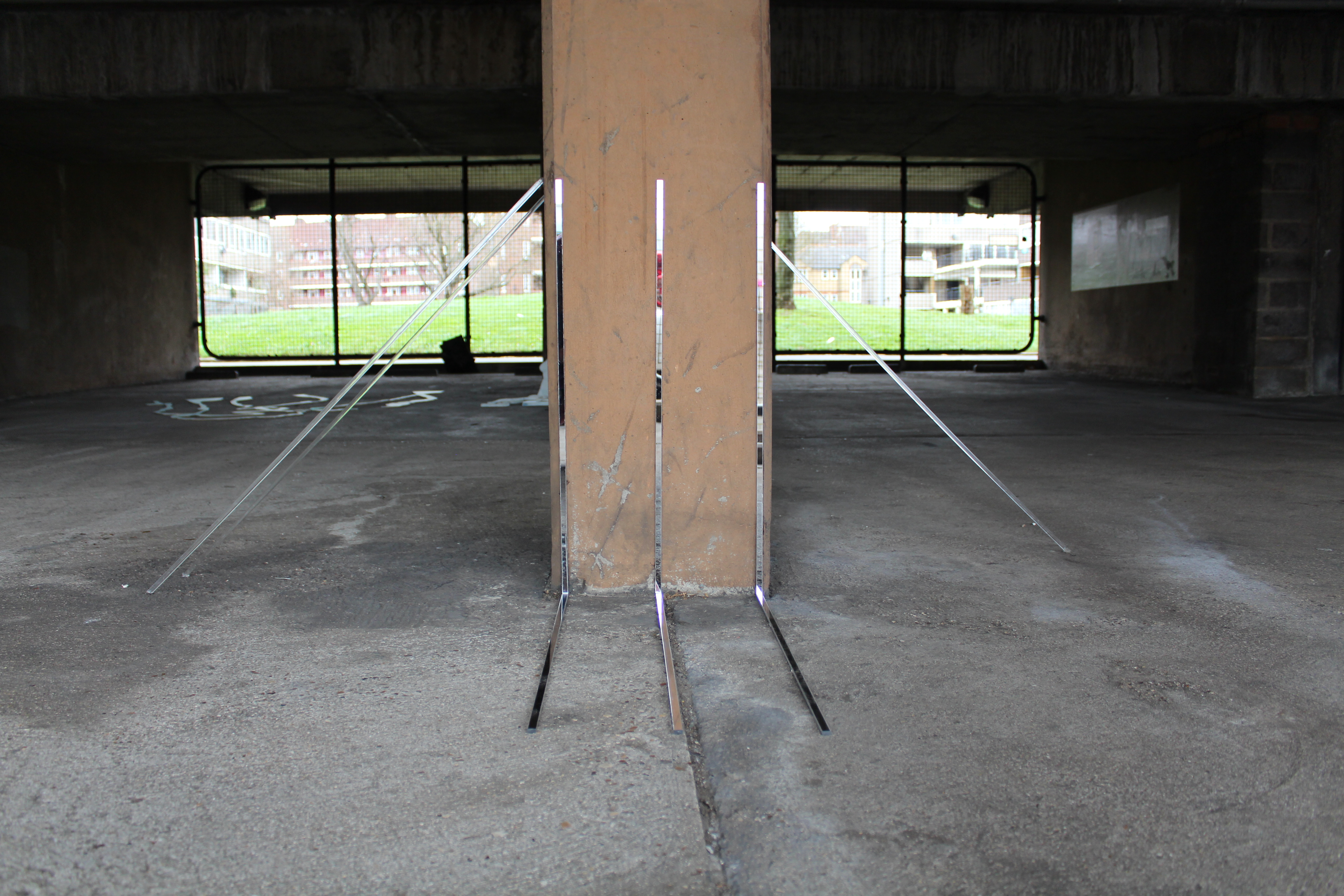 No wonder that in such a diverse area, offering natural, historical, and modern stimuli, artists and curators find their creative path challenged and constantly evolving. The creatives invited to take part in PADA project will be further granted gallery spaces to show their art. 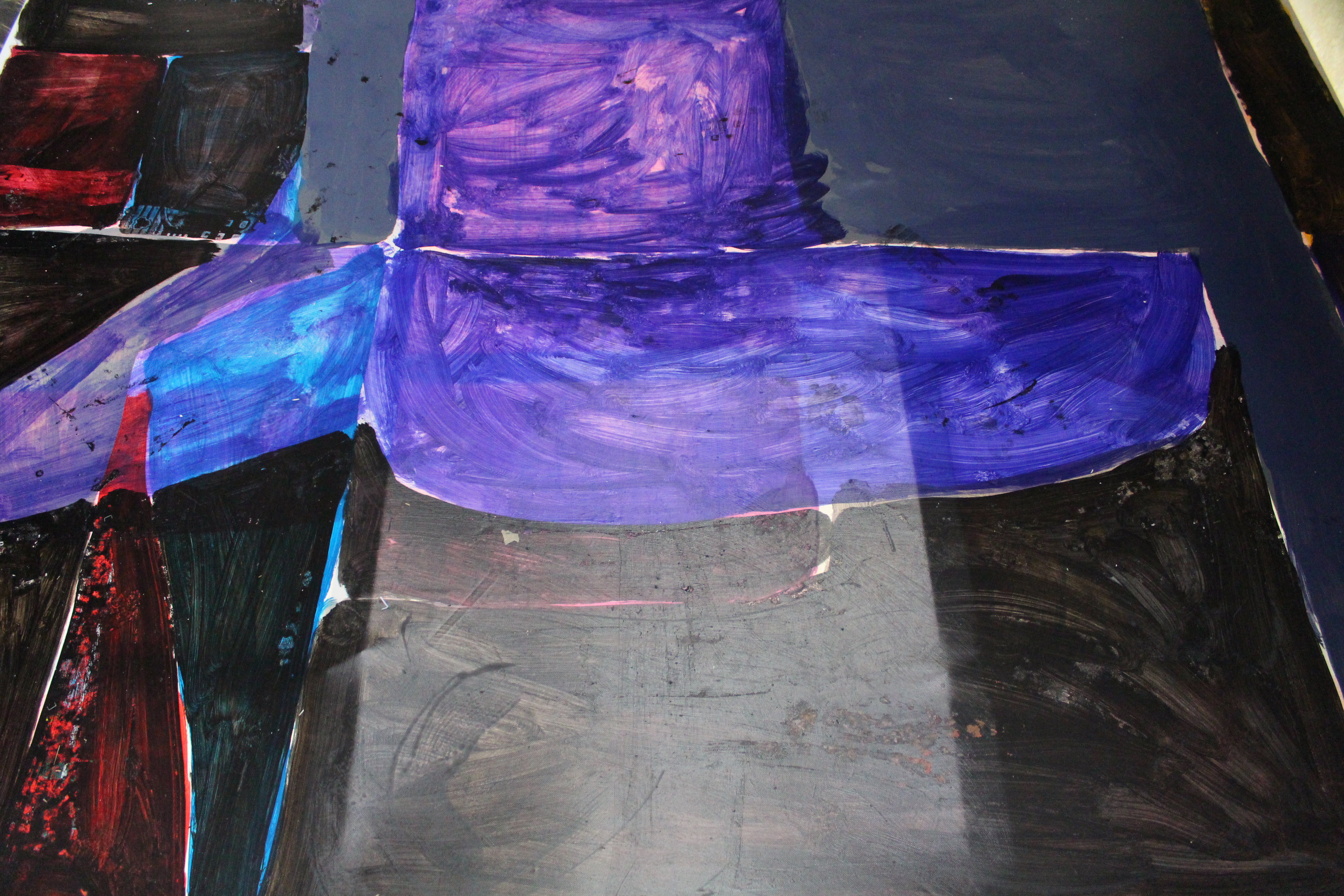 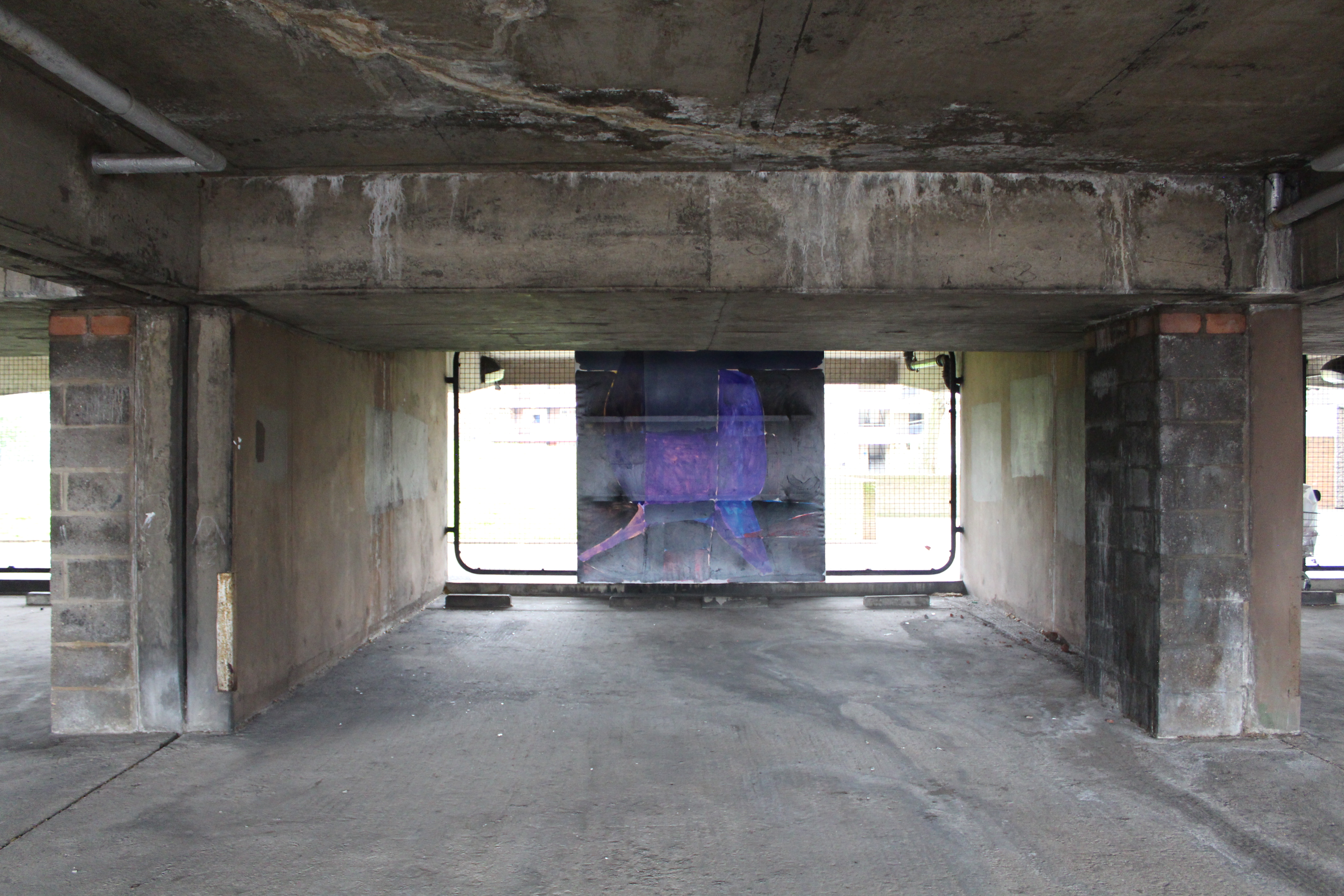 Recreational Grounds IV, only opened for 48 hours, launching at 6pm Friday 15 March, and closing at 6pm Sunday 17 March. It included the artists Norman Hyams, Emma Hornsby, Dori Deng, Kes Richardson, Ziggy Grudsinskas, Alexis Zelda Stevens, and Oliver Martyn. It was created in collaboration with Recreational Grounds and Turps Gallery, both within the creative network on the Aylesbury estate. This reflected on the systems and spaces artists use to create artwork. 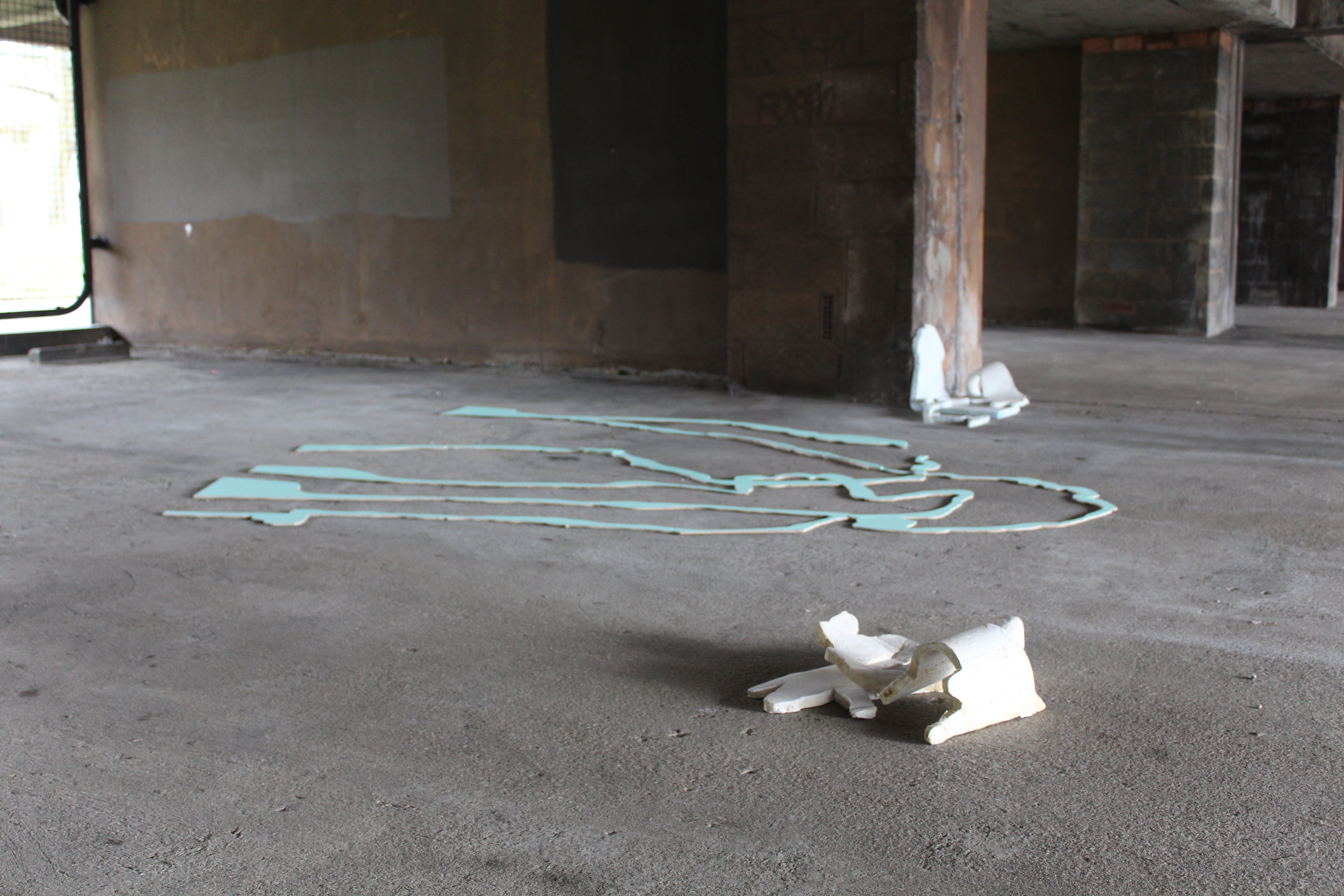 Recreational Grounds IV, as always with this space, was not a typically thematic exhibition. Rather, it presented a collection of ‘artists based on curiosity in their practice, with the goal of providing them with a new platform for developing their work, and a brief to inspire improvisation.’ The site created an almost automatic common ground for the artists, engendering an interplay between the various practices. Whilst encouraged to find a shared dimension, artists are also challenged to construct a conversation between the core elements of their practice in a challenging exhibition space. 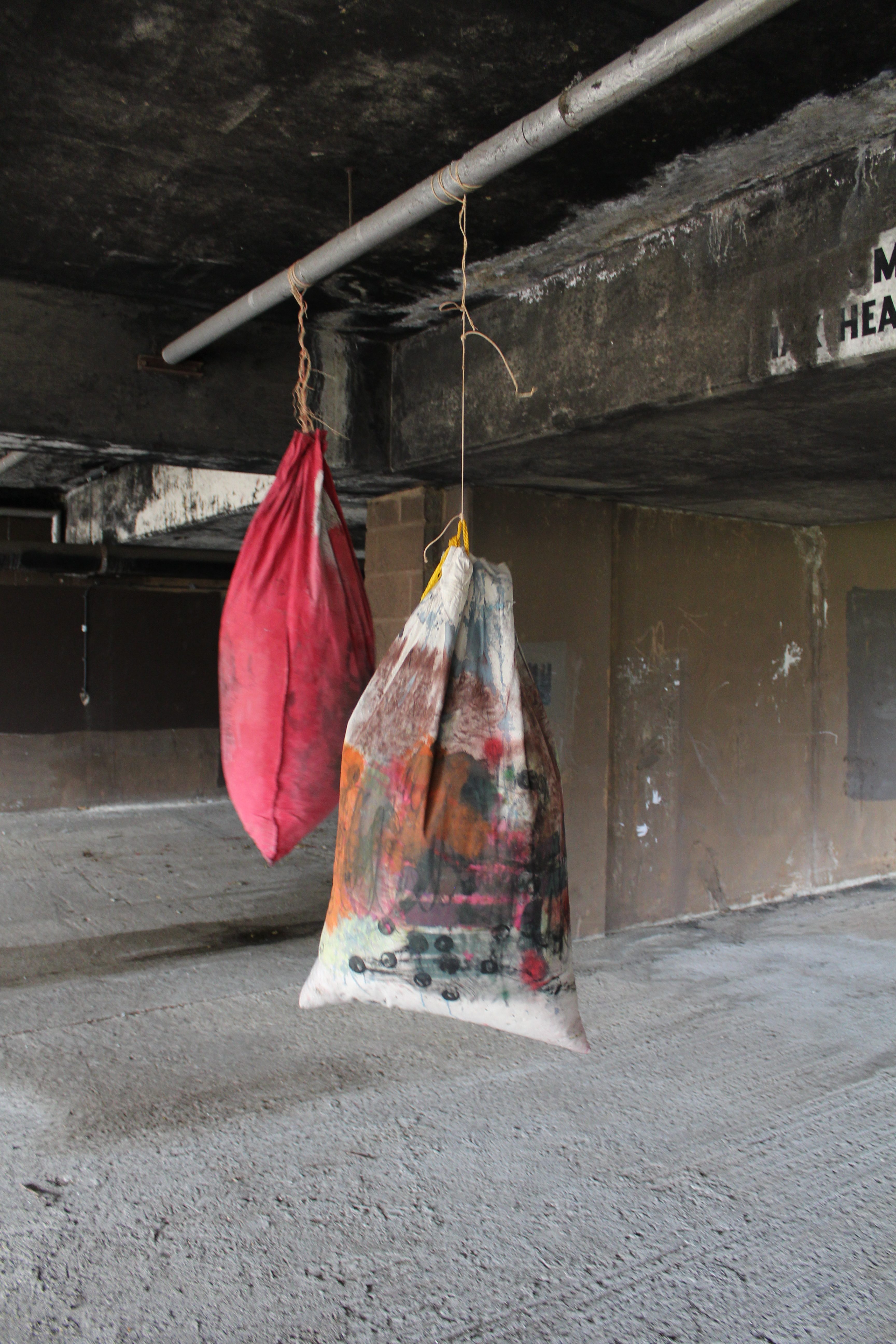 The choice of the artists followed parameters such as ‘the artwork must have no negative impact on the building. Everything installed must be removable and leave no permanent damage.’ Artworks must, furthermore, ‘respond to the site and display an ambitious approach to creating new site-specific work.’ 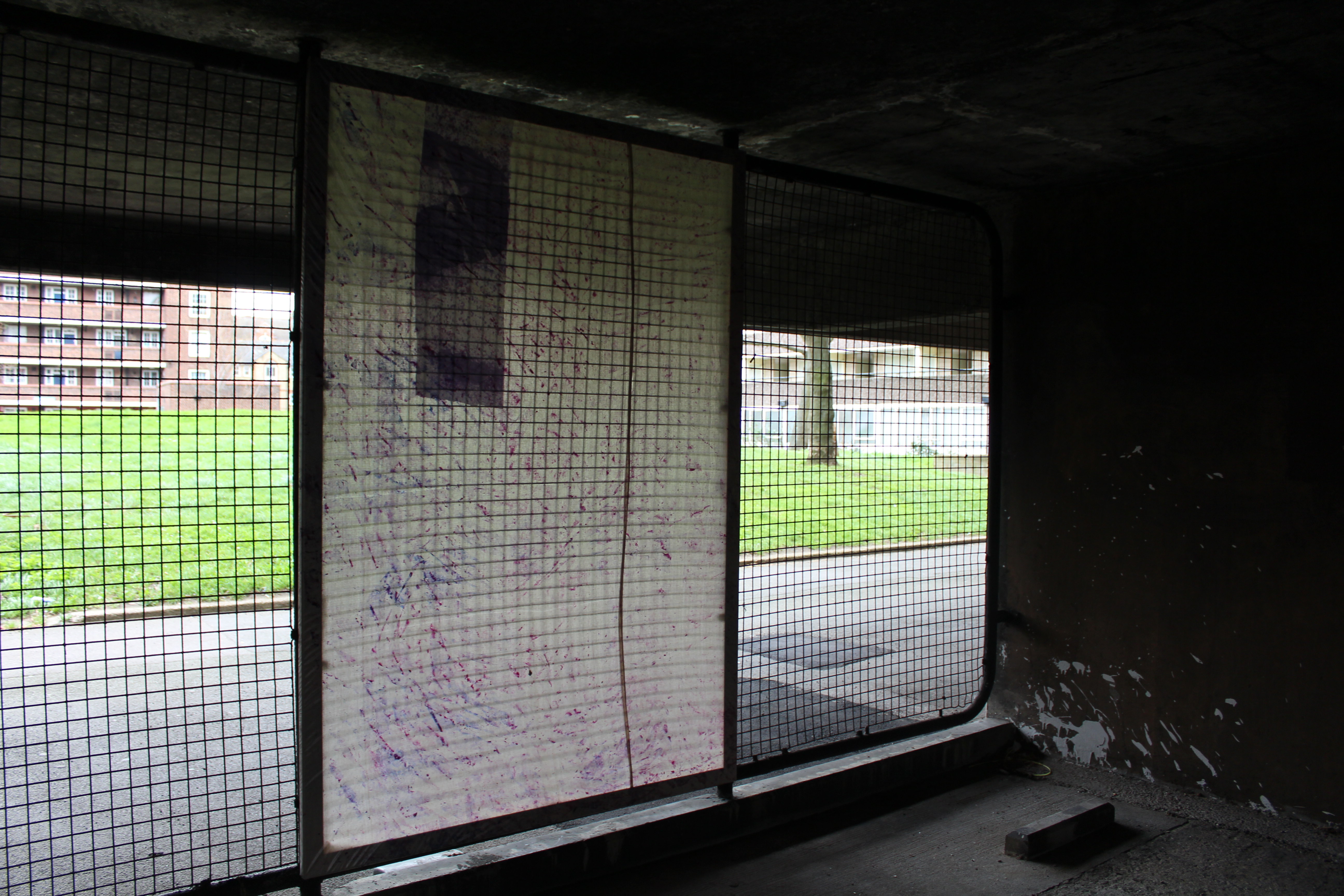 This was mirrored in the spatial take-over of the artworks. Walking around, visitors would bump into Norman Hyams’s stained sacks, slide on Emma Horns’s liquid spots on the floor, or stumble on Dori Deng’s metallic compositions.

Curated by Tim Ralston, Fiona Grady and Scott Miles, this first edition of Recreational Grounds in 2019 reflected on the systems and spaces artists use to create artworks. The site in Wendover House on the Aylesbury Estate – a post-war brutalist building, is a redundant ground floor car park. It has been closed to cars and sits dormant waiting for demolition. Rather than nostalgically deploring its near annihilation, the space has been transformed into a vast playground for intervention. This exhibition encouraged ephemeral and analogue approaches to react to the inspiration and restrictions of the brief. The nature of temporary artwork in a public space demands creative approaches to making and installing, and it is this challenge along with the unique space that inspires this proposal. 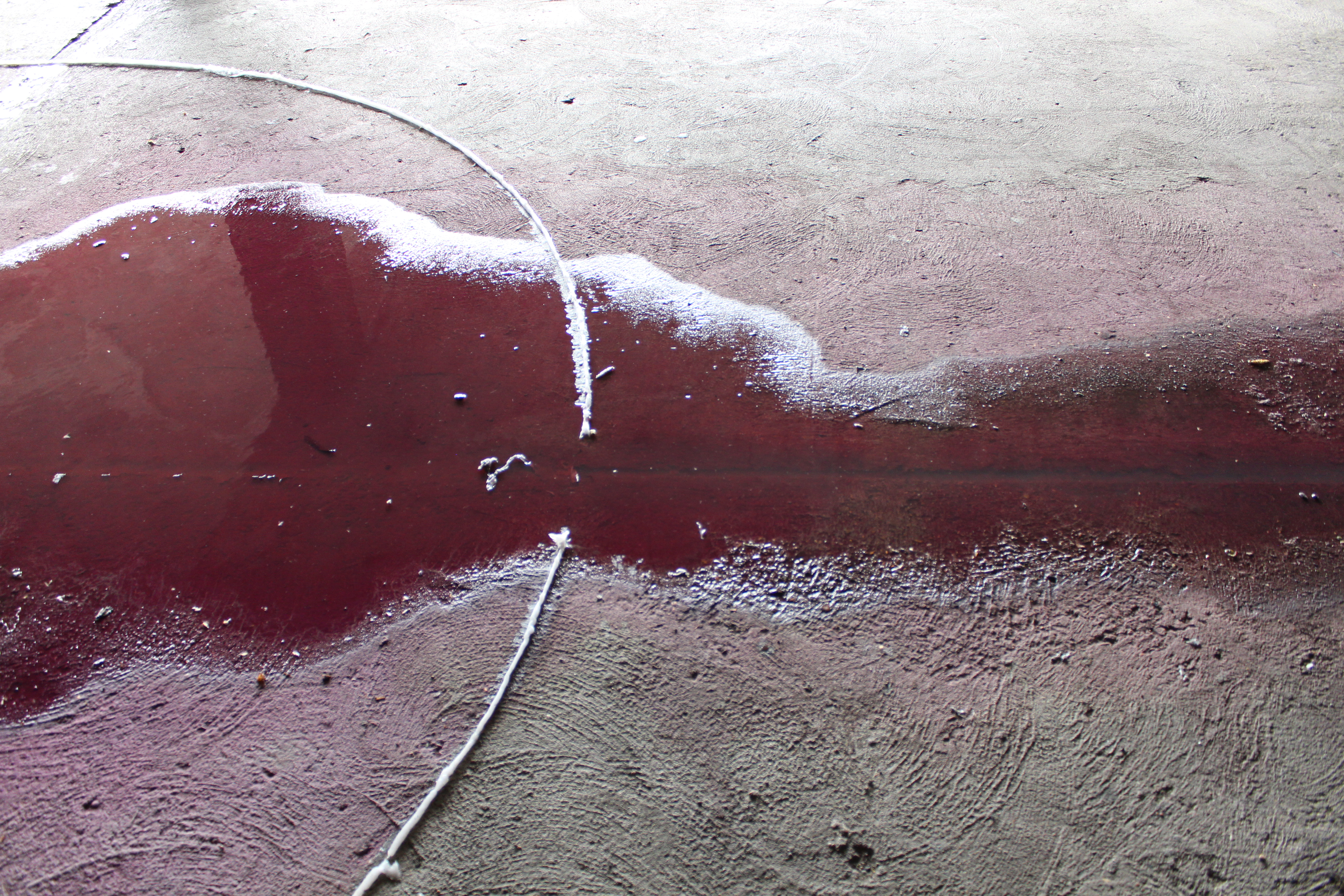 The exhibition revolved around a series of venues involved with the artistic career of people. ASC Gallery, Turps Gallery, both within the creative network on the Aylesbury estate, and PADA studios offer a different entry point into the career of an artist. Turps Banana is an artist-led educational space providing a painting programme, ASC is a charity accommodating studio spaces for over 700 artists across several sites in London, whilst PADA is a residency set within a redundant industrial park on Lisbon’s south bay. The cross-pollination of these locations is an example of the various methods in which artists seek to develop their art practice, and the resulting works are a testament to the importance of learning and collaboration, and the fine line between material and place within their works. 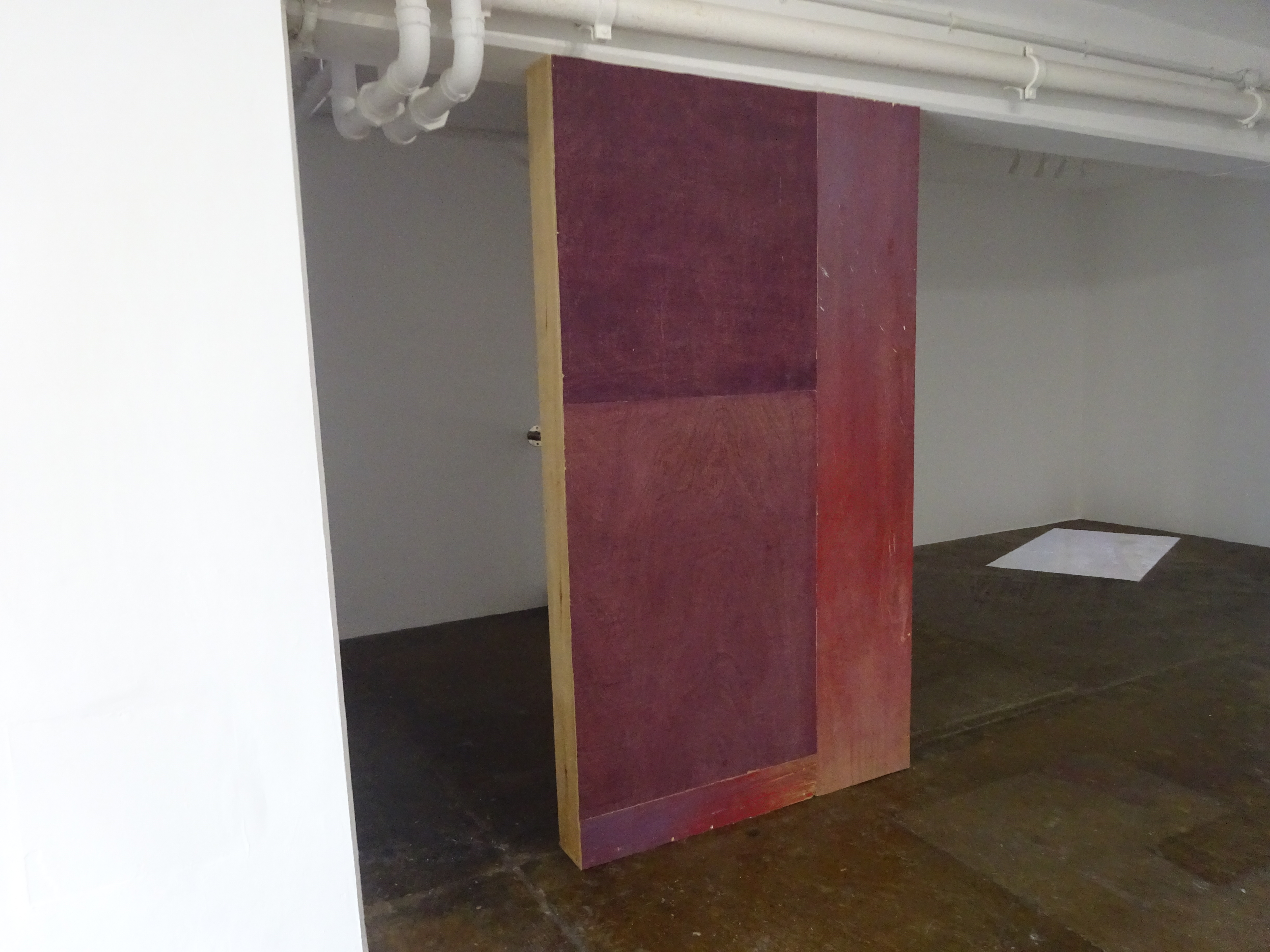 On Friday 15th March ASC Gallery and Recreational Grounds offered to the public a look into the work developed during the residency. ASC Gallery’s show, running until the 3rd of May 2019, presents the creations of Mark Jackson, Luisa Jacinto, Rebecca Guez, Tim Ralston, and Diogo da Cruz. They all come from Britain and Portugal and have been working within the industrial ruins of PADA’s Companhia União Fabril (CUF) in Barreiro. 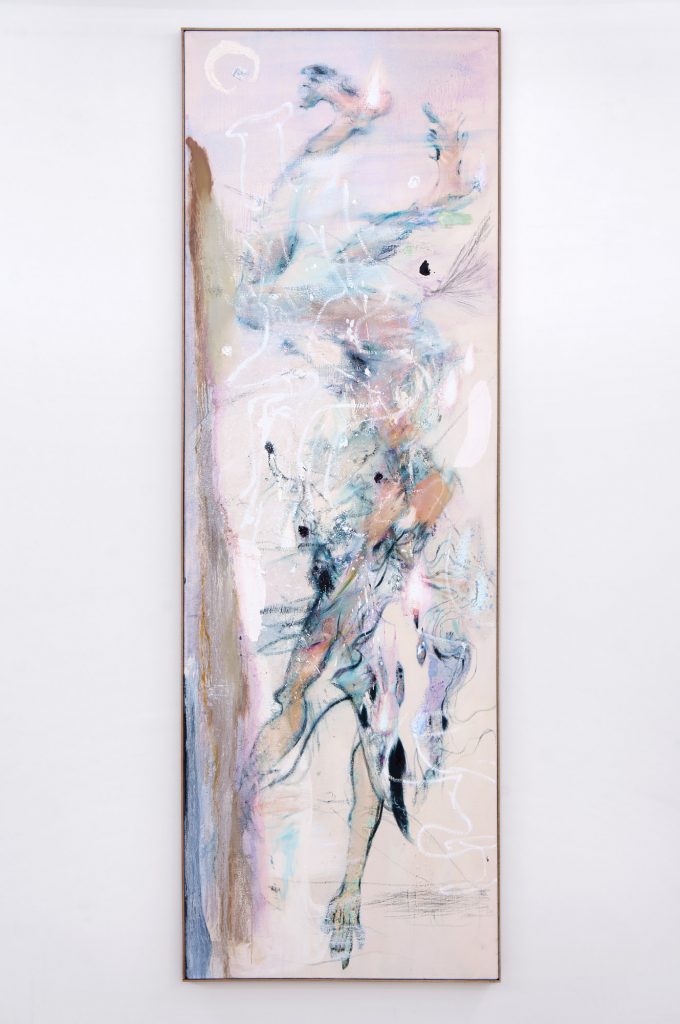 The artists have been clearly influenced by this alien environment. Its crumbling brutalist architecture, ruins of industry, fields of pyrite ash, and vivid minerals, resulted in a visible materiality and evident fabrication processes within the artwork. The artist integrated the manual processes of production that surrounded them echoes the ethos of PADA. They were inspired both by the by-gone labour of the ruins that surrounded them, and the dynamic craftsmanship present in the area. The resulting oeuvres combined their ongoing works with their newly found explorations of technique and process. The exhibition reflects on an international community that has come together in Lisbon over the last six months, and stresses the importance of geo-cultural exchange. 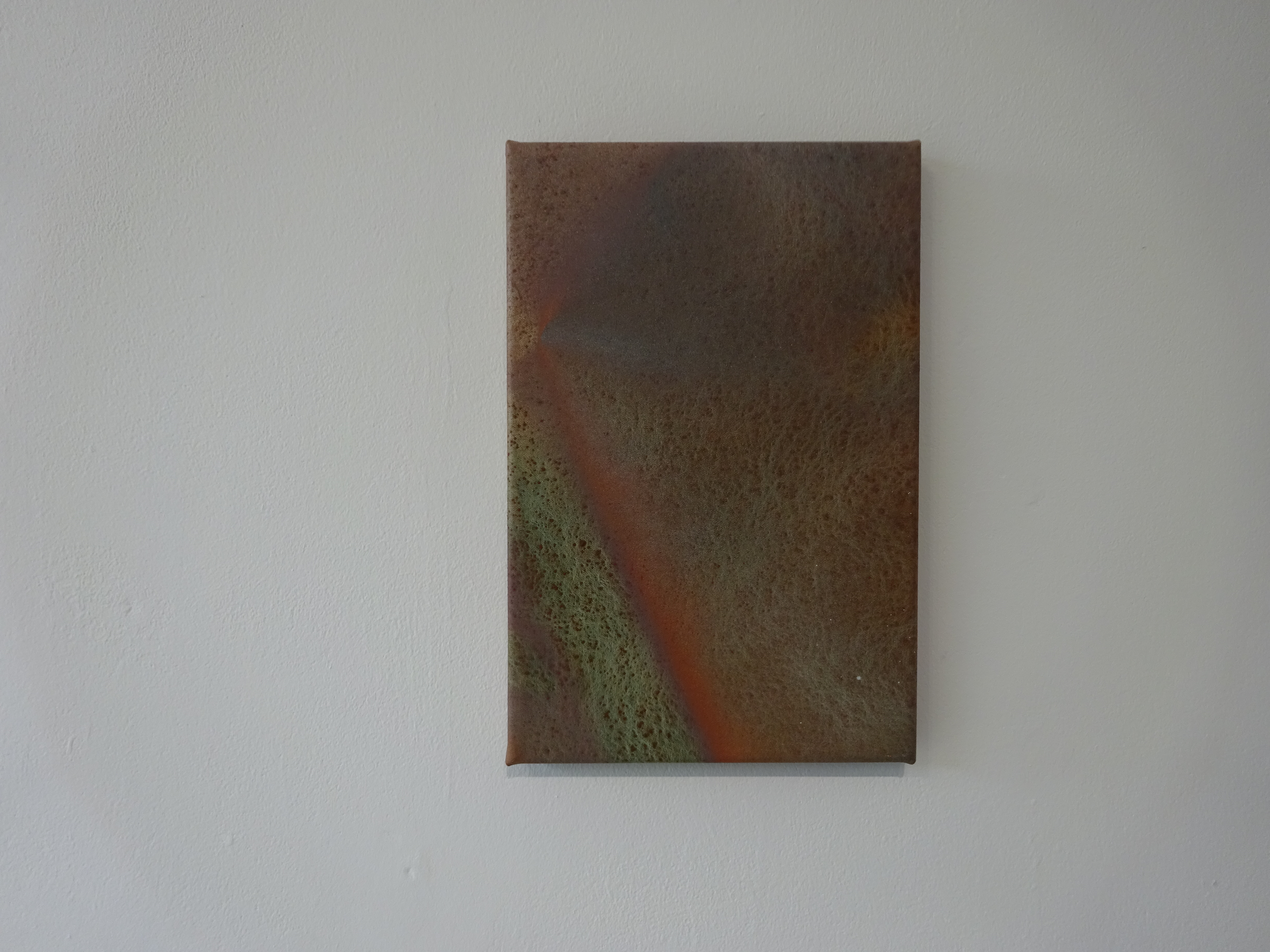 Soon, my interviews with the artists will be available to read. For now, see the artists’ bios:

Mark Jackson (British): Jackson’s process involves a continuous cycle of drawing, painting and digital imaging. Finished works typically comprise dozens of Photoshop layers, scanned sketches and previous paintings. This approach creates digital chaos from which his singular visions emerge. Colour is heightened to maximum saturation, suggesting the luminosity of the screen. Marble smooth gesso panels allow for nuanced brushwork and subtle gradients. The paintings thus take on the aesthetic properties of the digital, whilst remaining stubborn in their materiality.

Luisa Jacinto (Portuguese): In the threshold between the compartment and the landscape, between what is built and what is manifest, there is a subtle field that can be named. It is a field of balance and seduction, between the will to retain (or frame) and the yearn to leave (or contemplate). Luísa Jacinto’s work focuses on this field, that can be that of art, or of cinema, or architecture but, first of all, of life itself.

Rebecca Guez (British): Working with oil paint on raw canvas, Rebecca Guez stains and manipulates cloth, so that the surfaces become agents of accumulation and marks of time. Her paintings explore the physical actions of absorption and indirect gesture, to produce highly sensual and effective physical works.

Tim Ralston (British): Tim Ralston’s paintings are concerned with our connection to the landscape, the ideology of looking and our relationship and augmentation of our surroundings. They aim to develop a relationship to the specious nature of landscape painting throughout art history and examine what landscape can be now. His paintings act as an abstraction of the landscape by creating uniquely fabricated plywood panels site specifically.

Diogo da Cruz (Portuguese): Cruz’s work materializes analogies that interrelate disciplines, with a quite rigorous and elaborated process, creating symmetric and ironic objects. The film presented for the show at ASC is from the ongoing project Wisdom Warriors, focused on a collective that designed a revolutionary project that can drastically change the way society relates to technology

For information on PADA, visit:www.padastudios.com