Erwin Wurm: New Work is the largest solo exhibition in the UK to date of works by the Austrian artist (b.1954), who has expanded conceptions of sculpture and the human form over the last thirty years. 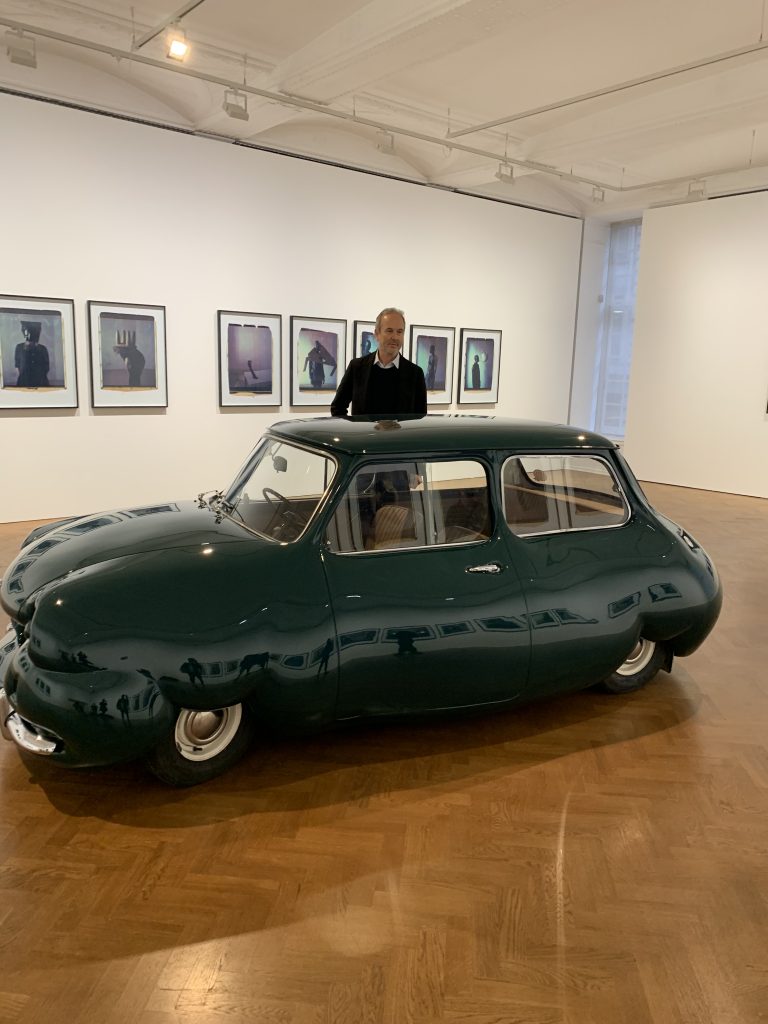 The exhibition encompasses the artist’s new group of ceramic works, which take the form of bodily abstractions; new works on paper; a new work in his Fat Car series; the latest in his humanoid Stone sculptures, which stand upright on legs; Polaroids recording recent One Minute Sculptures and live performances of a One Minute Sculpture on loan from Tate’s permanent collection.

Throughout the show’s run, visitors are invited to participate in creating their own One Minute Sculpture according to the artist’s instructions, which will be recorded in a photograph for them to keep (full details of timings available here).

Erwin Wurm’s sustained interest in the varied intersections of the physical and psychological runs through all five bodies of work in the exhibition, at times manifested in a sense of the surreal or absurd. His new ceramics abstract individual body parts, which take on new meaning when seen in isolation, subverting our perception of these objects in their altered forms. The One Minute Sculptures capture the sculptural potential of the human body and bring the dimension of time and impermanence into this traditionally spatial and permanent form. In Wurm’s Stone sculptures, the weighty mass of a moss-covered stone stands in for the body, perched atop legs that exhibit different characteristics – whether clad in bellbottoms, barefoot, or booted – hinting at a distinct personality. The Fat Mini, a racing-green Mini Cooper, addresses the West’s bloated fascination with mass consumption, the fattened, anthropomorphic automobile satirically confronting our value system.

Can I use the idea of the sculptural to process everyday life and our time to gain a new perspective or a new possibility for interpretation?

New Ceramics
Exploring the connection between psychological states and the physicality of the human form, Wurm challenges traditional sculptural representations of the body. Abstracted body parts – ears, lips, noses, fingers and navels – have seemingly escaped their bodily restraints to take on a life of their own as individual entities. Each work features an isolated body part and, by extension, its associated means of sensory perception. Fingers represent the sense of touch, ears symbolise hearing, and noses suggest the sense of smell, each coated in textural glazes of white, purple or fleshy pink. A number of these are placed on unique ceramic plinths, such as Double Navel, which sits upon a cabinet-shaped pedestal, or Peace Restrained, a skyward-pointing finger atop a footstool. These attenuated forms remain in a precarious state of distortion, as if poised between creation and dissolution. The deconstruction of the body separates form and function, while prompting a heightened bodily and sensory awareness in the viewer.

“I began to question my fundamental understanding of sculpture. In the process I arrived at the concept of time, followed by theoretical considerations on the aspects of mass, volume, fullness, and surface. The concept of time has become the essential aspect of my One Minute Sculptures.”

Over the course of his career, Wurm has radically expanded conceptions of sculpture, space and the human form, through his ephemeral, participatory One Minute Sculptures, which, as the title describes, exist for moments before they dissipate. The viewer is instructed to interact with everyday objects such as fruit, furniture, cleaning products, buckets or shoes in a prescribed way. “My instructions are given in a relatively strict form and the viewer should adhere to them, otherwise it will become something different – not one of my sculptures.” The participant’s action or interaction is documented for posterity in photographs, drawings and videos, the boundaries between performance and daily life blurred and the roles of viewer and participant or subject and object conflated.

It was Wurm’s One Minute Sculptures that inspired the Red Hot Chili Peppers’ video for Can’t Stop (2002), in which the band performs its own versions of Wurm’s work from this series. Double Bucket, on loan from Tate’s permanent collection, will be included in the exhibition as part of a live performance program in which the public may participate.

There is often a contemplative or philosophical dimension to the One Minute Sculptures, which act as catalysts for a moment of introspection by placing the viewer in an awkward or paradoxical relationship to the object. The ephemerality of these works subverts the permanence of traditional sculpture, with ‘one minute’ denoting the brevity of the action, rather than a literal timeframe.

Wurm likens the intensive work on his drawings to a diary, in which he sketches himself and his family, as well as artists, writers, conductors or cultural figures who interest him. His aim is not portraiture but rather an exploration of facial topographies or the psychological states of his subjects – as in the drawings of smokers that relate to an asthma attack he experienced on an island – or formal considerations such as the effects of enlarged heads, distorted facial features or geometric bodies. Of his self-portraits, Wurm explains “I draw myself because I’m an easy victim. I’m not recognisable and I don’t have any vanities about how I appear.”

“When I was younger, we used to call these cars that the rich and powerful would drive ‘fat cars’, referring to the status of their drivers. But then, people say that over time a master becomes more and more like his dog. That’s what I was thinking with the fat cars. When we own a car, perhaps it’s the same: the car starts to resemble us, and reflect our society.”

The idea of the human body as sculpture is obliquely evident in Wurm’s Fat Mini, the latest in his Fat Car series. He creates his Fat Cars by adding bulbous layers of Styrofoam and fibreglass onto the existing framework of a car, transforming its sleek lines into a bloated mass. As he describes, “the idea was to combine a technical system (the car) and a biological system (the human being)”, to form a powerful visual critique of society’s gluttonous consumerism, its interest in destruction and reconstruction and its paradoxical obsession with thinness. Wurm views the bodily process of gaining or losing weight in sculptural terms, as the addition or subtraction of material, and often creates illusions of growth or shrinkage in his work. “As the volume of an object is altered, its content and meaning changes too”, he comments.

When Wurm began making his Fat Cars in 2001, he looked to cars that stood as icons for their country of origin, such as the Italian Ferrari and German Porsche, to construct a critique of the greedy consumer habits of the rich. The 1960s Mini Cooper that Wurm has selected for this work is a quintessentially British car. In its modern form the Mini has been remodelled as an enlarged version of the modest original, which is taken to extremes in his Fat Mini, with its flabby mass obscuring the iconic shape.

Erwin Wurm: New Work Thaddeaus Ropac LONDON ELY HOUSE 19th Feb 2019 – 23rd Mar 2019 ropac.netAbout the artist
Erwin Wurm (b. 1954) lives and works in Vienna and Limberg, Austria. A graduate of the University of Applied Arts in Vienna, he is best known for his sustained explorations of the material and conceptual boundaries of sculptural form.

Over the last two decades, Wurm has also explored clothing as a sculptural theme – as a second skin, protective shell, outline, or the filling out of volume – in works such as his large-scale installations where fixed architectural components are dressed in knitted pullovers. He has also focused on the notion of time in his complex multi-disciplinary work: from the shortest-lived pieces, the “dust sculptures”, to the performative One-Minute Sculptures.

Wurm has twice participated in the Venice Biennale. At the 54th Venice Biennale in 2011, he exhibited his installation Narrow House in the Palazzo Cavalli Franchetti as part of the collaborative event Glasstress, and he returned to Venice for the 57th Biennale in 2017, where he represented Austria.

Transform yourself into an artwork for one minute.
Art / Fashion in the 21st Century : Art Book Review