On February 18, Theaster Gates’s first and much-anticipated museum exhibition in France, entitled Amalgam, will open at Palais de Tokyo in Paris. To coincide and to mark the announcement of representation, Gagosian will present selected recent works by Gates at 4 rue de Ponthieu, Paris.

In a single decade, Theaster Gates has incubated compelling new models for legacy building, social transformation, and making art. Encompassing sculpture, painting, ceramics, video, performance, and music, his art both derives from and sustains ambitious urban renewal projects—creating hubs and archives for Black culture, which serve as catalysts for discussions on race, equality, space, and history. Aspects of Gates’s oeuvre suggest the almost shamanic role of worker and artisan, where the power of the unseen is harnessed and manifested in the ordinary and everyday. In his abstract compositions made out of new and used roofing materials—tar, rubber, slate—working-class labor, ritual, and formalism intersect and are imbued with religious potency.

Occupying two floors of the Paris gallery, the works on view highlight some of Gates’s artistic preoccupations in a panoramic sweep: the Civil Tapestries (2011­–) made from lengths of used firehose; the cast wall works Bronze with Stripe and Bronze (Africa) (both 2016) and tar paintings Playground with High Horizon and Torchdown (both 2014), which relate to the working history of Gates’s own family; the ceramic vessels and figurines inspired by African artifacts and made by Gates in his Chicago kiln; and Neon (Mountain) (2016), from a series of neon sculptures based on W. E. B. DuBois’s modernist data visualizations on the state of Black life in the United States, exhibited at the 1900 Exposition Universelle in Paris. The imposing and resonant statue Black Madonna (2018), set in the gallery’s street front vitrine, was modeled after a keychain tchotchke of a medieval sedes sapientiae (throne of wisdom), a devotional title for Mary as the vessel for the Christ Child. Paired with a salvaged hardware sign, the rebus encapsulates one of Gates’s main conceptual pursuits: to evoke the sacred and spiritual through the objects and materials of the everyday. 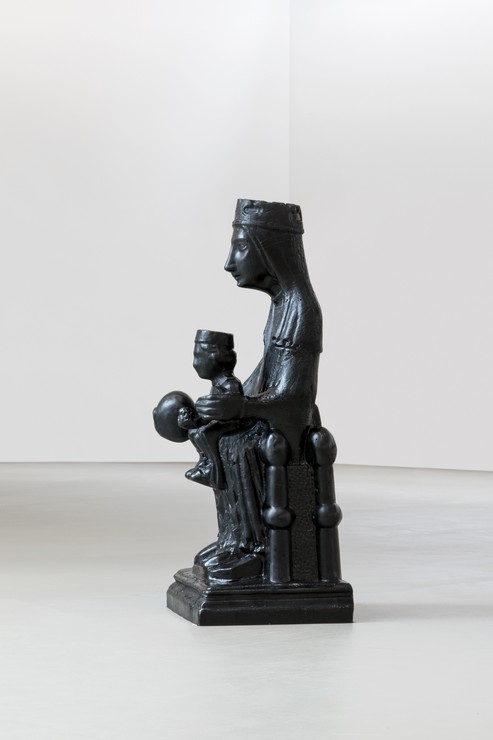 #TheasterGates: Recent works by Theaster Gates are now on view at Gagosian Paris. Join us tonight for the opening reception from 6–8pm. The exhibition occupies two floors of the Paris gallery and highlights a selection of Gates’s artistic preoccupations in a panoramic sweep. Find out more via the link in our bio! __________ #Gagosian #GagosianParis Theaster Gates, "Shifting Lands," 2017, bronze and tar, 53 × 109 inches (134.6 × 276.9 cm) © Theaster Gates. Photo: Tom Van Eynde 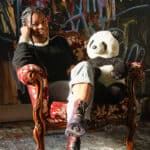