GONE is KAW’s inaugural exhibition with Skarstedt Gallery he will debut four large-scale bronze sculptures, and a series of new paintings. 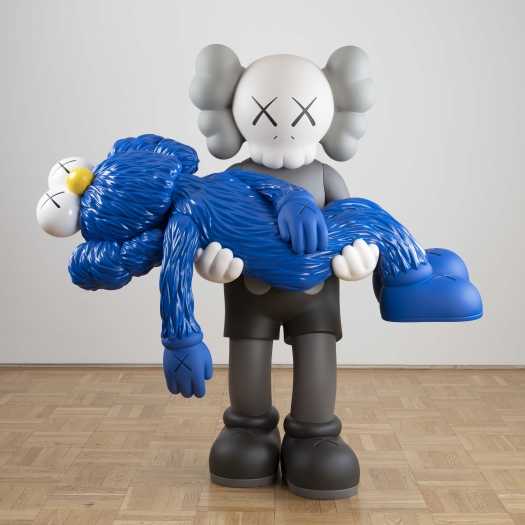 Ranging from 6ft. to 8ft. tall, KAWS’s bronze figures command moments of careful contemplation, yet comfort viewers with their visual familiarity. With its head hanging low, WHAT PARTY, the iconic CHUM character, who before has been cast valiantly charging towards the future, now stands with a resoundingly solemn tone. No longer confident and resolute, KAWS’s CHUM of 2018 is isolated, despondent, and still. Nudging at the viewer’s subconscious, KAWS subtly alludes to the complex cultural and political environments in which we live.

In the sculpture GONE, KAWS sources a pose reminiscent to that of a classic pietà. An overwhelming sense of sadness permeates the space in this poignant depiction of loss. Curiosity is peaked as viewers are invited to consider if the forward stance of COMPANION is that of mercy, sacrifice, or heroism. The artist’s ability to rouse new personalities out of his intriguing cast of characters reveals an endless commitment to his practice of skillfully manipulating form, shape, surface, and color to evoke an immediate response.

New insights to KAWS’s ideology also reveal themselves in the curation of paintings, which, unique to this body of work, feature a slightly different colour palette – viewers are brought to exalt in rich earthy tones: deep green, burgundy, moss, teal, and pops of neon yellow. Elements of landscapes are abstracted, and figurative features are shroud in washes of the rich tones. Carrying through the lifespan of KAWS’s work, the signature “X” reveals itself again only to be layered by shadowy foregrounds, establishing the sense of being in a place within the artist’s mind.

KAWS also unveiled two new multi-paneled paintings, consuming the viewers by their depth and expansive scale. Residing somewhere between installation and painting, these multifaceted works bring a physicality to their subject matter in an activated way. Familiar to the Warholian tradition of repetition and seriality, the audience is asked to consider each panel’s image singularly, or together as a unified whole – yet another symbolic investigation of our culture’s connectivity and disconnectivity. Experiencing GONE offers endless parallels that one can draw between the paintings and bronzes; moments of witnessing and hiding, moments of bravery and resignation, and the subsequent paradox of emotions.