Medium of Exchange is Sheida Soleimani’s second exhibition with Edel Assanti. In her latest body of work, Soleimani charts a fragmented history of the relationship between OPEC nations and western political powers since the 1960s, when the organisation was formed, highlighting the correlation between sovereign oil wealth and civil rights abuse. The show follows the series’ U.S. institutional tour to three venues earlier this year. 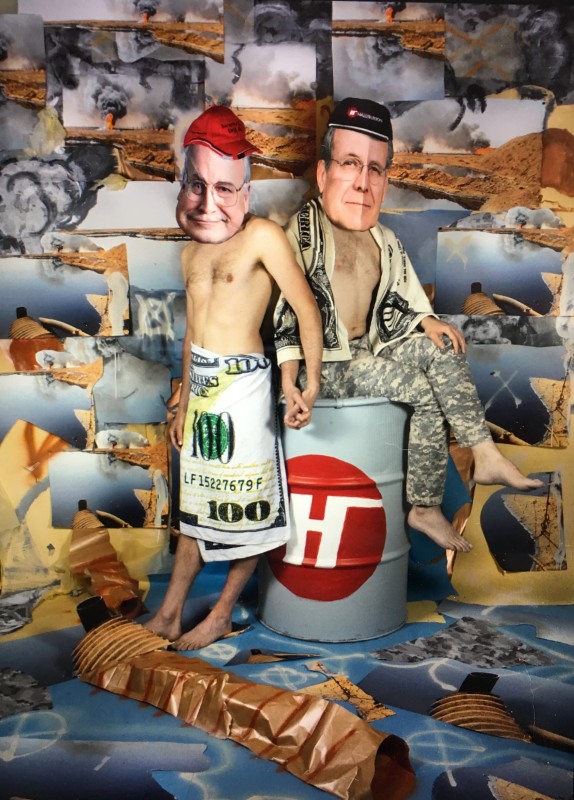 Medium of Exchange combines photographic tableaus with a scripted film. The freestanding photographs portray theatrical interplays between caricatured OPEC Oil Ministers and the western government officials who together control the oil industry. Solitary or group portraits are staged against backdrops composed of found images of oil fields and refineries, strewn with props relating to the commodities or cultural signifiers that shape each specific narrative. Soleimani’s various characters are engaged in bizarre acts of excess, romance and aggression. In the group portraits, the power plays between the represented countries are illustrated through references to BDSM, proposals of marriage and clandestine liaisons. In one scene, Dick Cheney, wearing only a $100-bill towel and baseball cap, holds hands with Donald Rumsfeld; repeating Halliburton logos signal their shared corporate past and controversial implication in profiting from the war with Iraq. This encounter takes place amidst a gridded environment of repeating pipelines, explosions, and desert landscapes. Elsewhere, a bare-breasted Henry Kissinger, on bended knee, raises an oil-smeared diamond ring to the partially nude José María Botelho de Vasconcelos, Angola’s Minister of Petroleum. 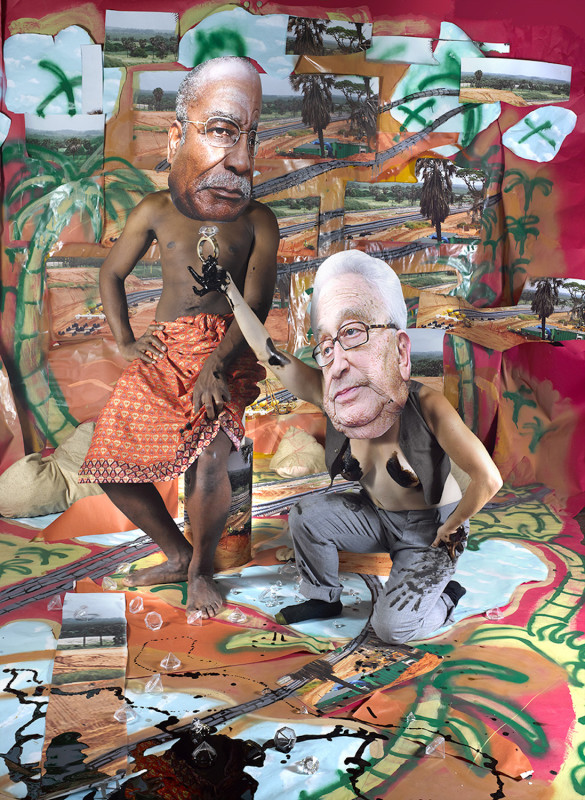 The artist employs queer actors of all races, builds and genders, whose anonymous bodies, decidedly distinct from those of the men whose faces they are wearing, peek through holes in their oversized masks and costumes in jarring ways. These breaches of character serve to expose the bodies of those in power to symbolic acts of violence, as well as subvert their traditional displays of masculinity and authority; at the same time, it reveals the bodies of those that might suffer at the hands of men in power as they accrue wealth through exploitation. Medium of Exchange’s film stirs the scenes within the photographs to life: the characters converse in a sequence of narratives adapted from public records of speeches and conversations between government officials and top-ranking officers. The flirtatious, eroticized delivery of alarming content is interspersed with an aerial perspective of two sets of hands playing a violent game of Snap with a pack of Iraq’s Most Wanted playing cards. The accompanying audio is of a child reading military
correspondence about food policy on U.S. bases. As the game progresses, the actors’ hands and the game itself become obscured by black, viscous oil.

About
Sheida Soleimani makes work that melds sculpture, performance, film and photography to highlight her critical perspectives on historical and contemporary sociopolitical events across the Greater Middle East. She is the daughter of political refugees who were persecuted by the Iranian government in the early 1980s. Soleimani focuses on media trends and the dissemination of information in the news, adapting images from popular press and social media leaks to exist within alternative scenarios. She is interested in the intersections of art and activism, as well as how social media has shaped the landscape in current political affairs and uprisings. Soleimani received her MFA from Cranbrook Academy of Art in 2015. Recent solo exhibitions include Medium of Exchange at Contemporary Arts Center (Cincinnati, OH), Atlanta Contemporary, (GA) and CUE Arts Foundation (New York, NY). In 2019 she will have a solo exhibition at the Southern Utah Museum of Art (Cedar City, UT), and will participate in the deCordova Biennial (deCordova Museum, Lincoln, MA). Her work has been recognized internationally in both exhibitions and publications such as Artforum, The New York Times, The Huffington Post, Interview Magazine, VICE Magazine, amongst many others. Soleimani resides in Providence, RI, where she is a professor of studio art at Brandeis University