Announced yesterday on Instagram, the Estate of Jean-Michel Basquiat will release a new 18-colour screen-print of the artist’s 1982-83 painting Boxer Rebellion, published by Flatiron Editions. The limited-to-60, 29-x-39-1/2-inch print will be sold exclusively through Pace Prints, starting today September 26 at 12 p.m. EDT. Orders will only be accepted by email at basquiat@paceprints.com, with the ‘winners’ chosen at random. Pricing will be tiered, starting at $35,000. 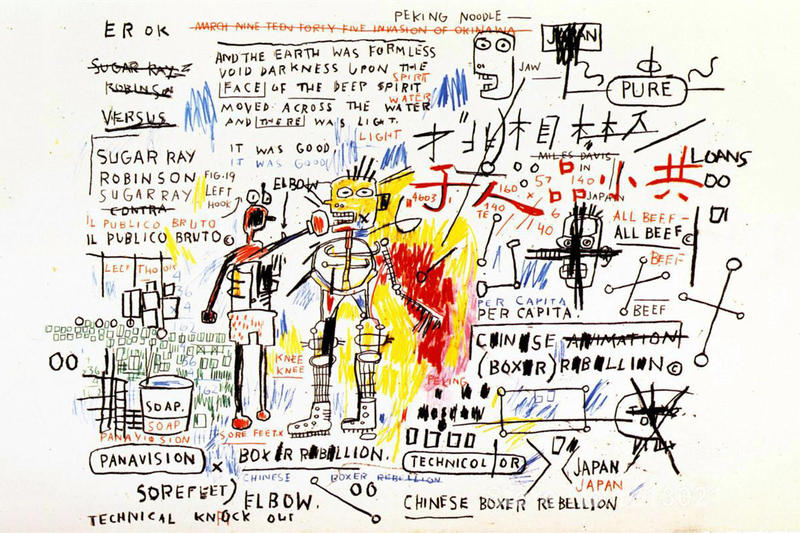 The Estate of Jean-Michel Basquiat is pleased to announce the release of a new 18-color Basquiat screenprint titled "Boxer Rebellion" (1982-83 / 2018), published by Flatiron Editions. The edition of 60 will be available exclusively through Pace Prints starting on Wednesday September 26, 2018 at 12 noon EDT.  Orders will be accepted exclusively by email at basquiat@paceprints.com, starting at noon exactly, and will be selected at random for a chance to purchase.  Orders must contain your full name, billing address and callback number.  No orders will be accepted in person or over the phone.  Pricing will be tiered and will start at $35,000 USD. ?????? "Boxer Rebellion," based on a work on paper created in 1982-83, depicts two boxers with stylized anatomical features exchanging blows, surrounded by references to boxing, the Chinese Boxer Rebellion, and related texts.  The sport of boxing, famous black athletes and class struggle are recurring themes in Basquiat’s work, which along with his trademark use of symbols—seen here principally in the form of Chinese characters—and the use of repeated and crossed out text, makes for an archetypal work in both content and style. The posthumous release is stamped and signed by Lisane Basquiat and Jeanine Heriveaux, the artist’s sisters and administrators of the Estate of Jean-Michel Basquiat. ??????? ? Detail from: Jean-Michel Basquiat “Boxer Rebellion” (1982-83 / 2018) · 18-Color Screenprint · 29  x 39 1/2 inches · Edition of 60