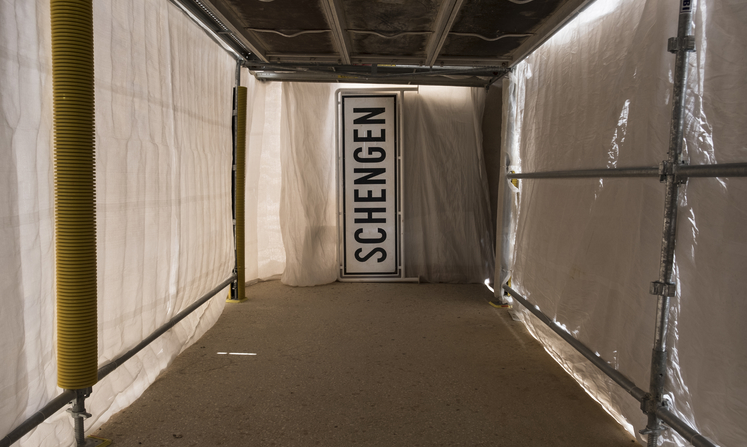 This week I continued my European tour and headed to Marseille for a few days with my mother. Neither of us had been before, so we spent our time exploring the city and desperately trying to adjust to the scorching sun and lack of ventilation. Armed with SPF50 in hand (she chose factor 30), we found ourselves reflecting on the fate of Europe whilst visiting the Domo de Europa Historio en Ekzilo at MUCEM, Quel Amour!? at Musée d’Art Contemporain (MAC) and Le Corbusier’s Cité Radieuse.

Whilst MUCEM was also hosting an Ai Weiwei show, as well as a photography exhibition on French eating (…), the exhibition that stole my heart was Thomas Bellinck’s Domo de Europa. There was very little information given about it, we had approached a pink umbrella stand – blocking an entrance to what appeared to be a construction site – and were told that the next available slot was in 2 hours. Wondering through every bookstore and every floor of the fortress, at one point bombarded by heavy techno courtesy of the museum’s summer programme, eventually the time had come and we returned.

We walked through and into a waiting room – quite barren, orange plastic chairs – the classic chairs you find in any office cursed by high levels of bureaucracy. A lady behind the counter gave us numbers and whispered a few rules: be silent; wait until your number is called; enter alone. I took these quite seriously and began to freeze everything out – taking part in the performance. I studied the waiting room carefully, the dusty photographs hanging, the large map of Europe that seemed – due to its wear – to be outdated, or in any event, incongruous. More people arrived, sat down, fidgeted.

My number was next. I left my mother in the room and ventured out, following signs – reminiscent of the ones we so often see on the Palatine, simple, easily moveable. The experience of walking through the domus is something I will forever recall, room by room, the silence surrounding me – the clamping heat and dust. All visitors, however, were told not to record the show in any way and not to discuss it at large and I intend to remain bound by Bellinck’s wish. I hope my account (or lack thereof?) has made it intriguing enough – it has previously toured in Rotterdam and Athens and, given the current political climate, there is a definite need for it to continue being the vagabond marvel it is.

Upon leaving, my mother and I had a nuanced discussion about why the European project is so critical to my identity and how political discourse needs to address the malaise of many, in order to avoid its complete collapse. Due to us walking through the show individually, our perception of the rooms from the inside had been different – as we could not draw each other’s attention to what struck us most. Bellinck’s approach encourages dialogue when exiting the domus and invites further reflection. 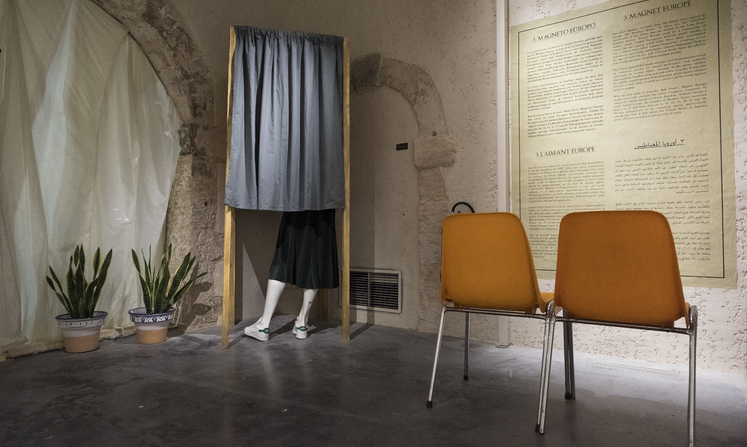 The following day we visited the Musée d’Art Contemporain, located further out past the Velodrome. Quel Amour!? reminded us of Chiostro del Bramante’s LOVE (review here) and the presence of a Gilbert & George added to our déjà vu moment. The entrance to the MAC was marked by several Louise Bourgeois hands, holding leaves that had fallen from the trees above. The two rotating Bruce Neuman chairs on the right of the ticket counter were the closest thing we had seen to a fan in a while. 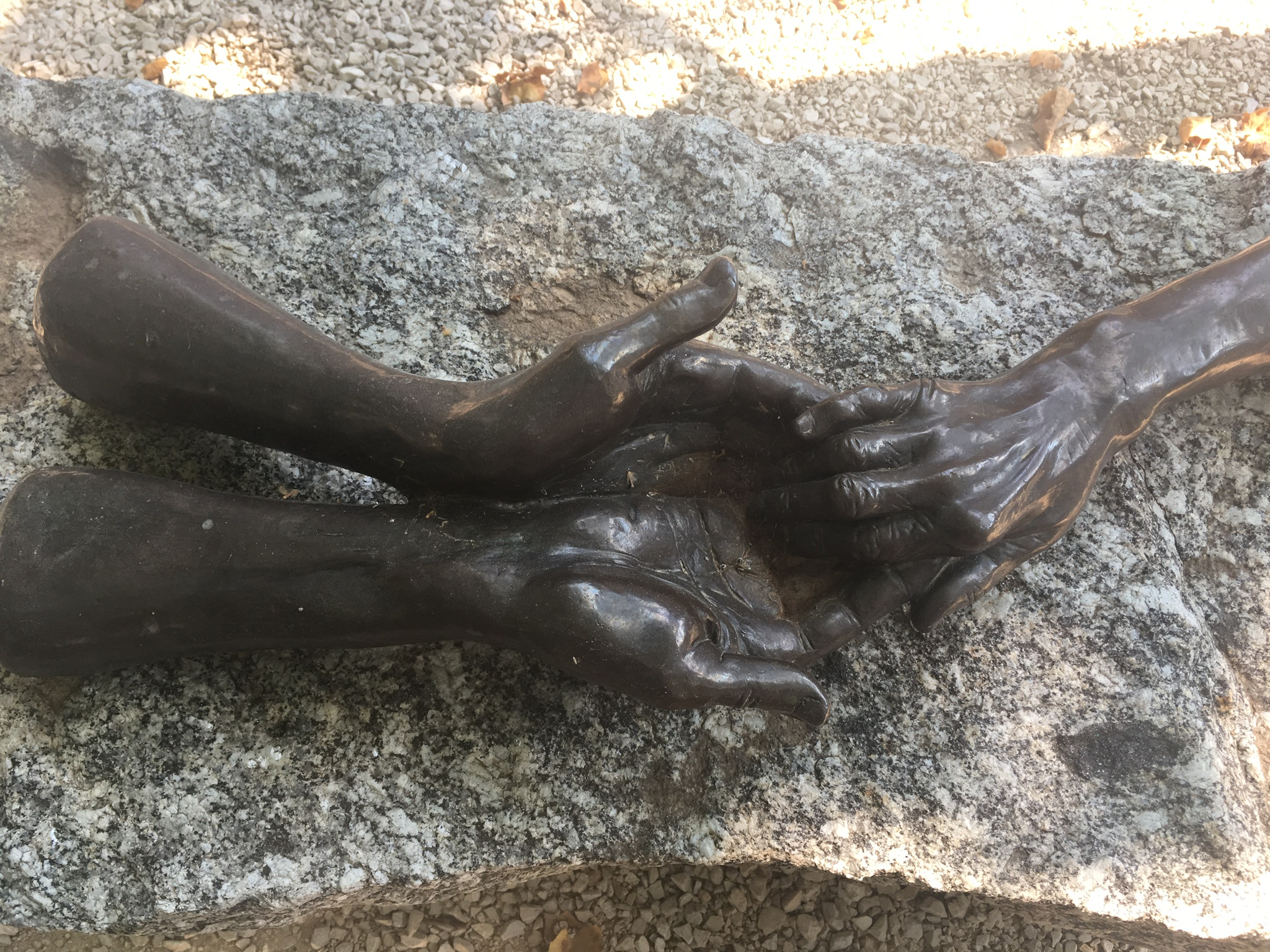 The show brought together works by some of the most renowned contemporary artists including Marina Abramovic (whose Barcolana poster is causing a stir) and Ulay, Yves Klein, Nan Golding and Pilar Albarracin. The space is deceptively large, parallel corridors unfold, with hidden rooms for video projections.

By far the best surprise was finding Jeremy Deller and Cecilia Bengolea’s Bom Bom’s Dream as part of the works. Screened at The Infinite Mix (shock, mentioning this again) in 2016 the video follows the journey of a Japanese dancer who travels to Jamaica for a competition. My mother was initially baffled at my enthusiasm for the iguana, but was soon drawn into the film herself. 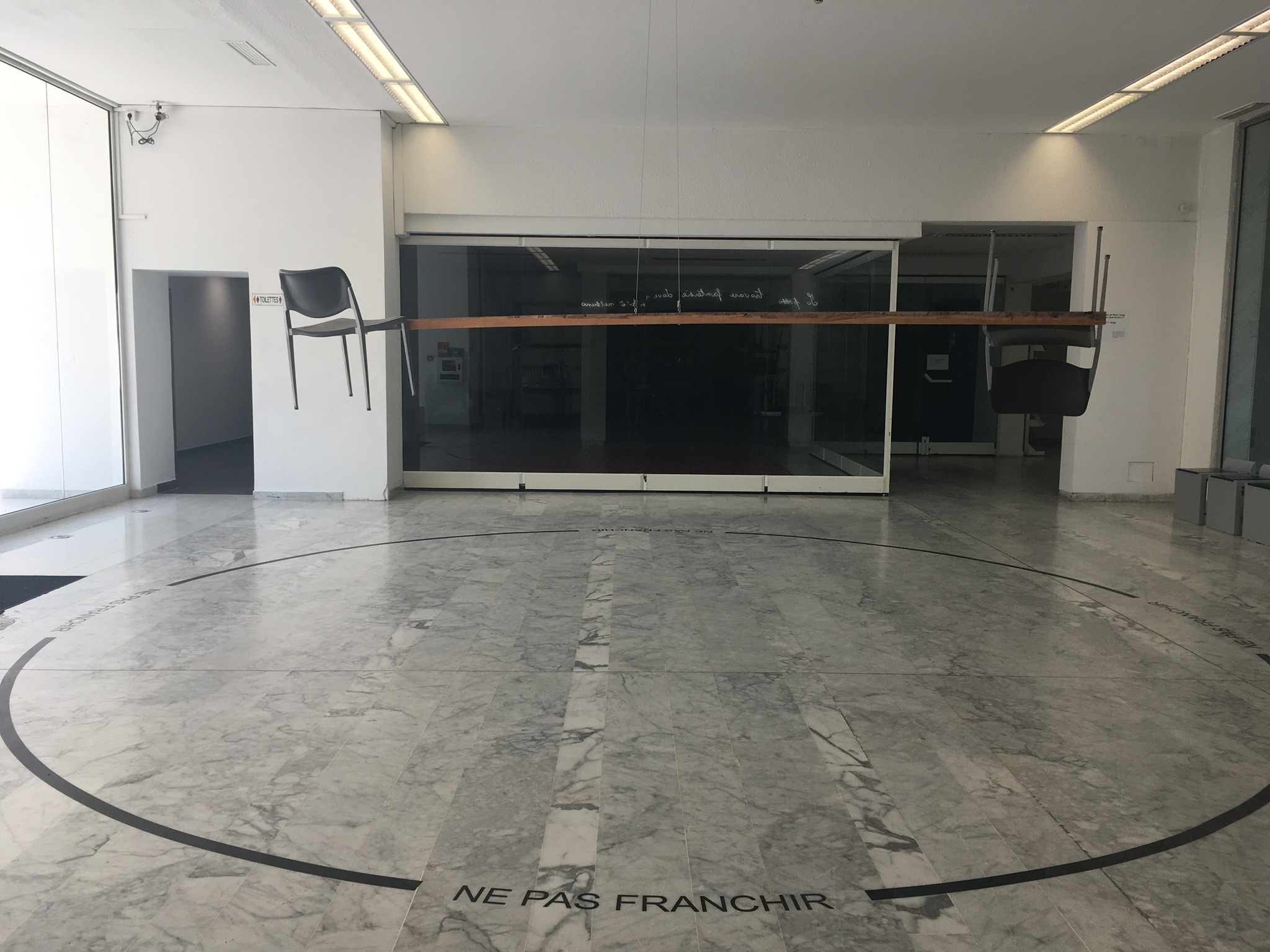 Finally, we boarded the bus towards Le Corbusier’s Cite Radieuse. Le Corbusier, following the displacement caused by World War II, had been tasked with creating social housing and given a plot of land outside Marseille. At the time, the area was desolate, hard to reach and lacking the city’s facilities. The architect therefore envisaged a vertical village – one which would foster a sense of community and one in which amenities such as a school, bookshop, bakeries and communal spaces could render its inhabitants less dependent from the centre of Marseille. 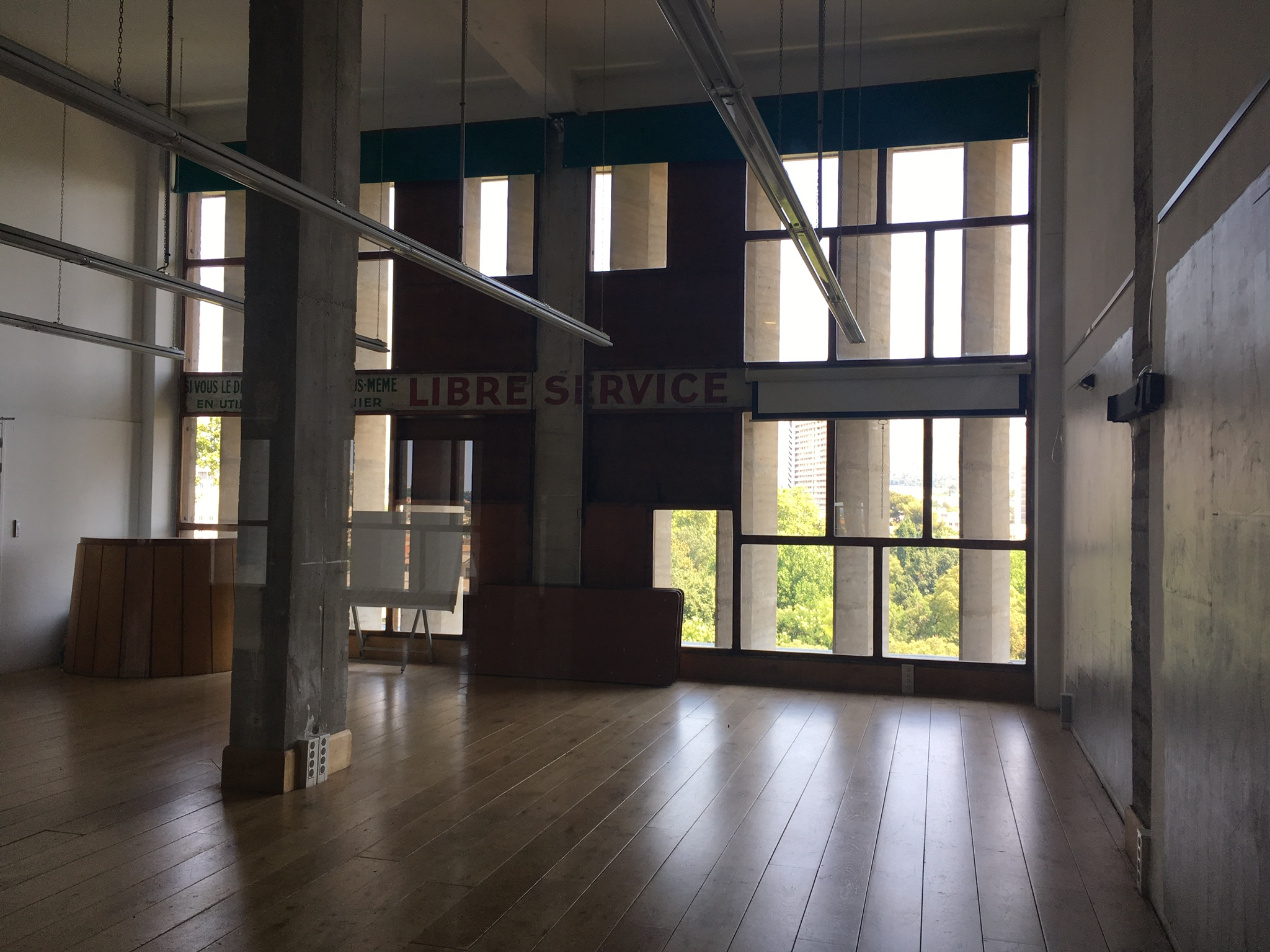 We left the MAC and its silent surroundings and boarded the bus towards Le Corbusier’s Cité Radieuse. Le Corbusier, following the displacement caused by World War II, had been tasked with creating social housing and given a plot of land outside Marseille. At the time, the area has desolate, hard to reach and lacking the city’s facilities. The architect therefore envisaged a vertical village – one which would foster a sense of community and one in which amenities such as a school, bookshop, bakeries and communal spaces could render its inhabitants less dependent from the centre of Marseille.

The towering structure doesn’t look daunting, primary colours emerging from the concrete render the building lighter, as do the staircases, intersecting as if greeting each other from the high-rise. Listed as a UNESCO World Heritage site, the building served as a critical model for Le Corbusier’s other projects – including one in Berlin – and in later years inspired Powell and Bon’s Barbican Estate completed some 30 years later. 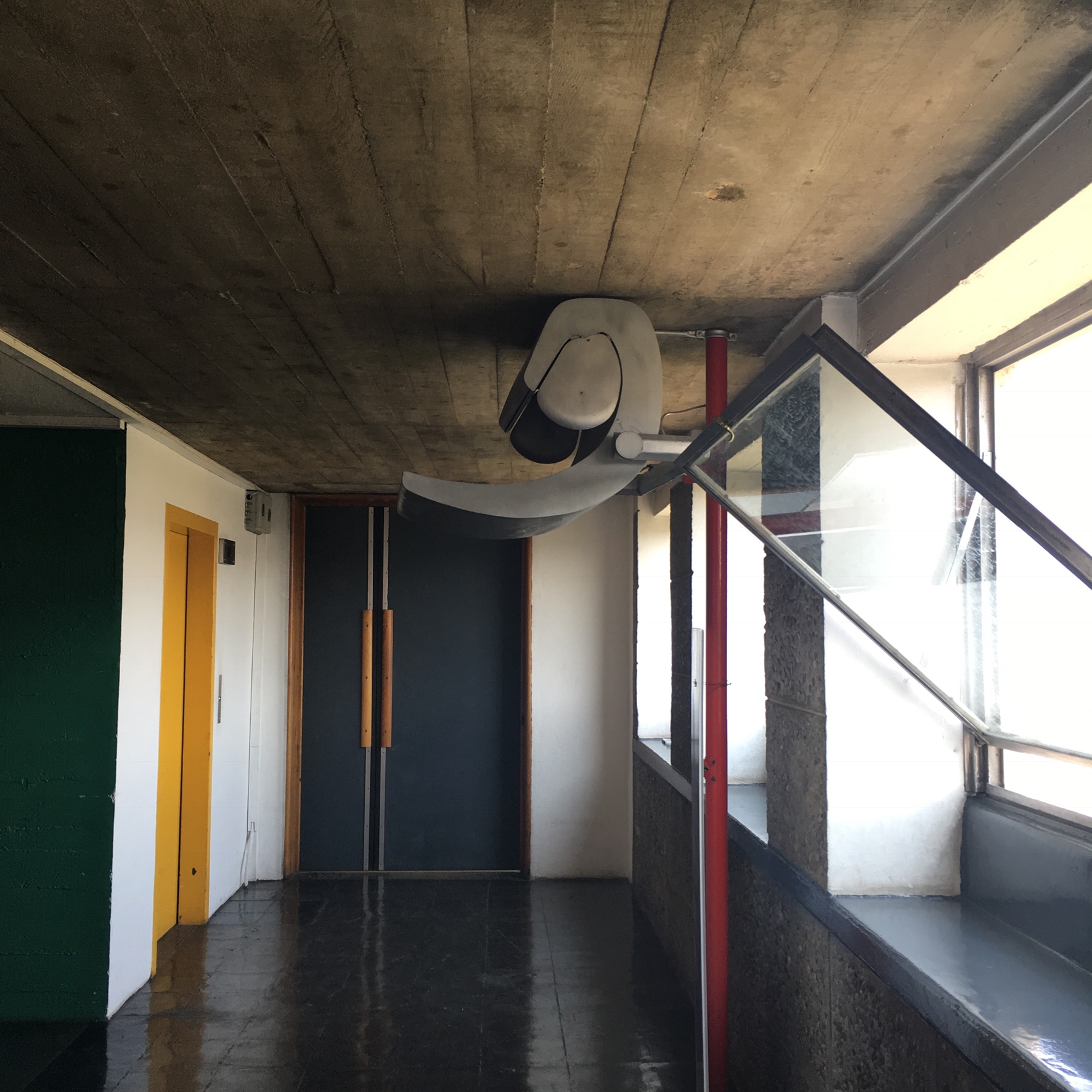 Once every two years, apartment no. 50, owned by Jean-Marc Drut, removes his furniture and allows contemporary designers to reimagine its interiors. The apartment is one of the very few that retained Le Corbusier’s layout as its previous owner was a close friend of the architect. Walking down the dim corridors, with spotlights highlighting the yellow mail boxes and red doors, we found no. 50 and knocked with slight trepidation. The visits are organised by the owners and highly dependent on whether they are in the flat. We put on shoe protectors and stepped into the flat, crowding in the kitchen where every incline and surface had been designed to maximise utility and to foster a sense of interaction. The window space encouraged children to help parents in setting the table and clearing plates.

As we stood around the table designed by Normal Studio, Jean-Marc explained the planimetry of the apartments and Le Corbusier’s attentiveness. As illustrated by an original print in the living space, the building is angled in such a way to maximise sunlight during the winter and shield from the overwhelming light in the summer. Le Corbusier, who was often described as being extremely authoritative and unwavering, had been persuaded by the former owner of the flat to open a school and eventually gave her the blueprint to the floor – telling her that she could change everything as she pleased, with the exception of the main measurements. He later invited ten school teachers to live in the building for a weekend – asking them for suggestions and comments as to its habitability. These details do not go unnoticed as we walk downstairs into the living space, the bedrooms and the bathroom with Jean-Marc pointing out the various items presented by Jean-François Dingjian and Eloi Chafaï including a series of experimental glass blown lamps, moulded from textile. 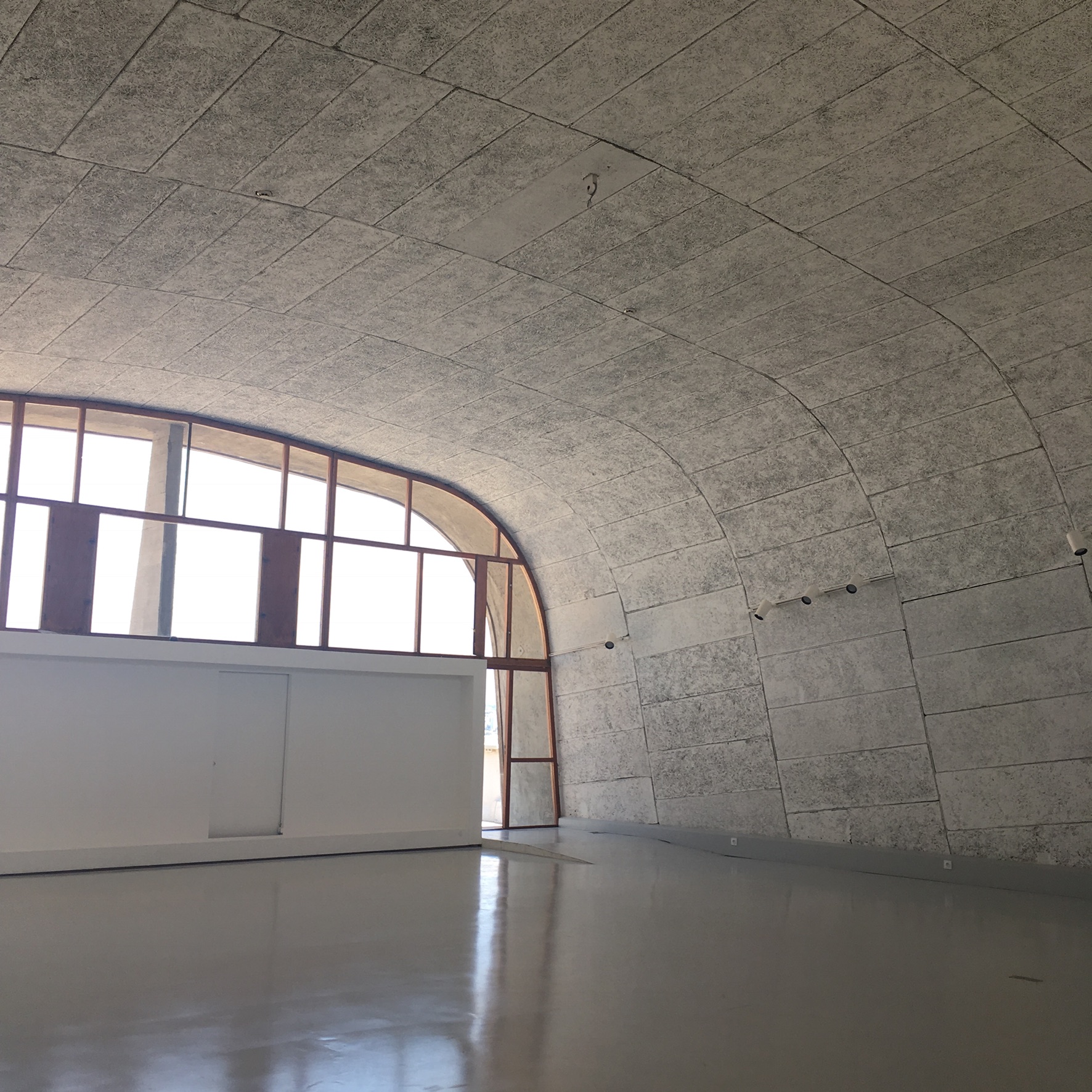 We eventually left the apartment and wandered further. An area behind glass panes read ‘Libre Service’, originally a mini market where inhabitants could (for the first time) select their groceries on their own and now a space bookable for yoga, events, exhibitions. Speaking of exhibitions, we made our way to the terrace where Ora Ito’s Marseille Modulor (MaMo) celebrated its five years with a show by Oliver Mosset ‘Untitled’. My focus was once again on the impressive flow of spaces. The high ceilings and pillars added to the sensation of being elevated, whilst the concrete gave a balanced reassurance and stability despite the rise. The white light reflecting around us was blinding and we took refuge once again in the cooler and dimmer corridors of the lower floors as we made our way down the staircases.

Quel Amour!? is on at Musée d’Art Contemporain (MAC) until 2 September 2018

Le Corbusier’s Cité Radieuse is always open although hours may vary for general tours. More information re no. 50 can be found here. 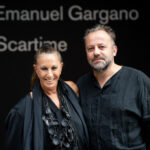