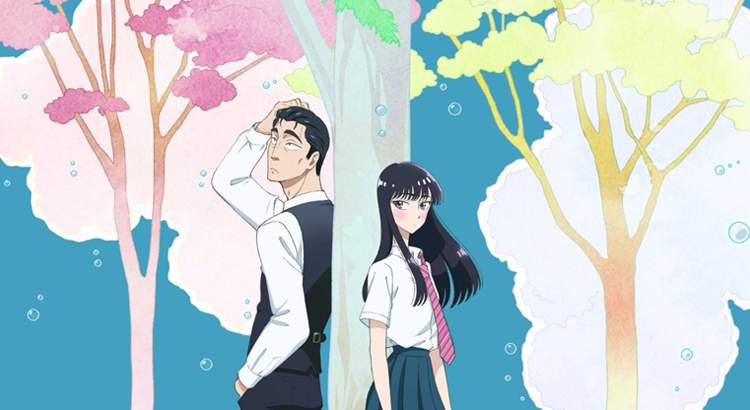 Rain rhymes with youth, love and melancholy. It also rhymes with pain but who cares about that.

With Koi Wa Ameagari No You Ni (After the Rain), Wit Animation Studios has taken Jun Maryuki’s sweet little romance manga to a whole new level, filling it to the brim with vibrant colours, poetic imagery and skilfully animated choreography leaving it bursting with life and something resembling magic.

High schooler Akira Tachibana sees all through her pretty almond shaped eyes: ordinary school life, routine shifts at a part-time job, broken dreams on the track field -altogether, enough to drain her life from any form of spirit or passion and yet, this couldn’t be further away from the truth. If Tachibana is obliviously blind to boys at her school, when it comes to the manager at the diner where she works at, there’s no looking away.
Masami Kondou has bed hair, sneezes loudly and makes Dad jokes. Middle aged, divorced and father of one, he manages a diner in Yokohama.

Not your typical girl meets boy love story, After the Rain is made unique by the unlikely relationship between the two leading characters.
A novice when it comes to love, Tachibana is emotion driven, fuelled by her feelings and letting nothing bottled up when it comes to expressing them. Her long time love for running having been curbed due to a recent sports injury, her fiery passion is suddenly redirected towards her crush and part time job manager, Kondou. Youth incarnated, she is the spitting image of a school girl in love (cue the blushing and hair twirling).
Eager to please yet disappointed by life, Kondou keeps a friendly front without ever displaying an inch of bitterness. His own dreams having been put to rest many years ago, he’s labelled himself content with life as is. With both characters having lost a part of themselves at one point in time, they indirectly become what the other needs whether it be the liveliness of youth or the quiet maturity of life experience.

The story being lived out mainly from Tachibana’s standpoint, with some back and forth with insights into Masami Kondou’s life and past, the anime’s colour scheme takes on Akira’s youth and vitality with strong, vivid shades for its character design and its painterly background artwork. Set in the bustling city of Yokohama, every scene is filled with activity and life with extraordinary attention to detail and nothing left to chance. The anime’s opening alone sets the tone for the series: playful, cheerful and vibrant with promising smooth animations and some degree of intrigue as an unlikely pair of main characters is introduced from the start.

The character’s art style remains somewhat loyal to the manga with scenes and expressions translated as is into the anime and yet, Wit Animation’s own take on character design brings more to the table when it comes to general appearance and personality. Referencing a somewhat modern take on an 90’s anime art style while keeping an exciting illustrative format pushes the art to the same level of importance as the narrative, having them compete for the spotlight. The anime’s illustrative format graciously leaves more room for artsy details to bleed through, bringing out the poetry of the series using a play on imagery while referencing back to some of the story’s more subtle themes such as stray emotions brought out by falling rain, loneliness and routine nostalgia. With beautiful, down-to-the-last-detail purposely thought out artwork and a solid storyline, both art and narration work hand in hand to transform After the Rain into a well-polished little gem of an anime.

If the unlikely romance is what animates the story, as a theme it probably comes second or even third to the ones of growing up/old and dealing with broken/forgotten dreams, making for a multidimensional story and so much more than your run of the mill drama. With interesting and emotionally complex characters bringing different levels to each one of their relationships, Koi Wa Ameagari Wo You Ni stays clear of already seen before linear storylines and makes for a charming, colourful series.