The art of dreaming, or how art can shape dreams - FAD Magazine
Skip to content

Last week curator Allegra Shorto launched a new program dedicated to the exploration of dreams through the lense of a wide range of artistic practices. The Freud Museum hosted the first experiment on May 25th, when a group of people stayed for the night, taking part in lucid dreaming inducted by sensorial experiences.

Shorto is the curator behind the project d.Rem  which aims to breach the gap between art and dreaming. She was inspired by the new approach to lucid dreaming taken by the expert Dr. Keith Hearne.
In his recent studies, he advanced the idea that the sensorial stimuli that surround us while sleeping can alter our dreaming patterns. To Hearne, a pathetic environment can reach our sense organs. By doing so, it can also encourage and initiate lucidity.

“Lucid dreams happen when the subject becomes fully aware that she/he is dreaming within the dream itself. You become almost conscious and awake all of a sudden. Yet, at the same time, you know with full awareness that it is actually a dream. In this half-lucidity, you can control what you dream and the actions you perform. When becoming lucid, people usually close their eyes and will themselves to another location that will actually appear.” 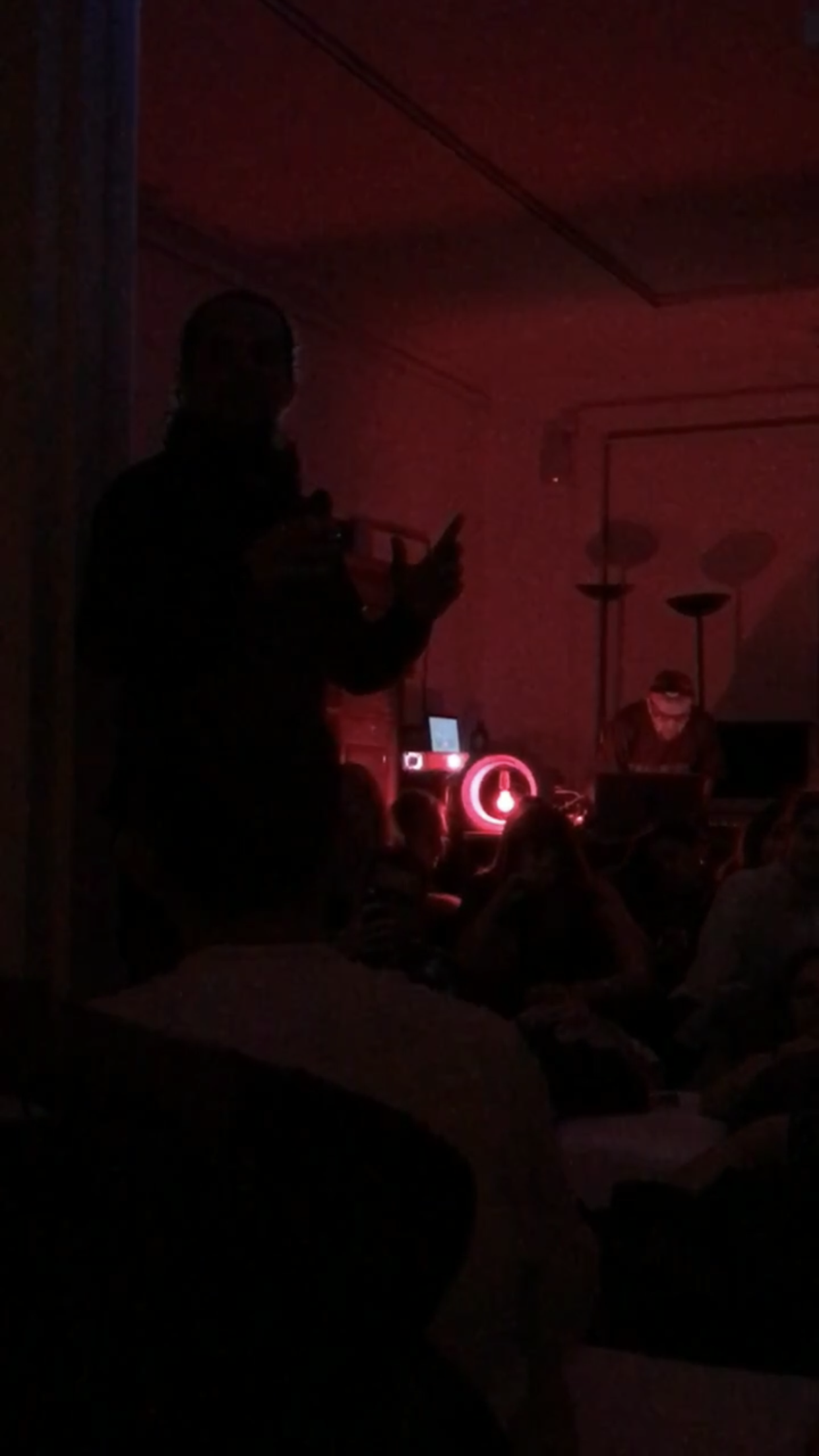 During the event, a small group of visitors where invited to stay over for the night in the museum. REM-Fit provided a number of mattresses. These were incredibly comfortable and relaxation and sleep were assured. Furthermore, artists working with sounds, body movements, shapes, and smells, all came together in the attempt to curate and partially command the dreams of the visitors

As Dr. Hearne remarked, our future looks more and more ready for lucid dreams. We are now living in a multisensory reality, where a tangle of different stimuli reaches our nerves all at the same time. ‘Real’ dreaming, where we fully disconnect from the everyday life, seems to me menaced by our being constantly connected to the outside world. Somehow similar to George Simmel’s predictions regarding the modern metropolitan dweller, we are, apparently, all becoming blasè individuals. When you manage to get stuck into a lucid dream while ‘sleeping,’ and what you see and do there is all you would like to be, but, then, for the rest of your day you are in this horrible life, then what is going to be your reality? You might want to just believe ‘real’ life is the one you control in your dreams.

For the sleepover, the sound artist Lee Berwick produced a compilation of music and sounds to be reproduced throughout the stay of the sleepers. His sound performance explored the motion and rotation of the Earth in relation to the sun and the moon. He believes that as the tunes harmonise with the movement of our planet, so our body would attune to it, entering an intense but harmonic relation with our surroundings.  The artist’s performance was a way of exploring energy in its peculiar relation to sound.

Berwick claimed that once he begun to feel the connection between energy and sound he experienced lucid dreaming as well. The energetic properties of sound, and their effect on the human body, via the linking of different energy fields, act as a catalyst for this kind of dreams. ‘Everyone can feel energy. you don’t need a scientist or a specific tool to measure it,’ the sound artist claimed. At the Freud Museum, Berwick attempted to tune the rooms with different energies to involve and influence the body, initiating lucid dreams. The elemental sound compositions were repeated in loop every 90 minutes, following the duration of a REM phase. Their cyclical return was based on the Chinese philosophy, that believes that energy and sound flows from Earth to Metal to Water to Wood to Fire and on back to Earth.

The musical environment imagined by Berwick was used by Mikael Öberg as a companion to his performance. At the beginning of the sleepover, he performed an apocalyptic story entitled The Divine Dreamer using his storyteller ability to enchant the audience. Creating long pauses between the words, and ever-modulating his volume of voice, he designed dreamlike imagery of an irrational adventure set between the dissolution and re-creation of the universe.

Berwick’s soundscape was interconnected with the diffusion of a specific smell in the ambient, as well as the projection of various psychedelic forms throughout all the rooms devoted to the sleepers. Odette Toilette’s olfactory curated the scents for this installation, for which she imbued the air with vetiver. This scent has a long tradition in the mythology of dream, and has long been used as a sleep remedy in all sorts of culture. In India, for example, it is woven into curtains that block out heat and light. Additionally, if vetiver is inhaled by sleeping rats, it changes their electrical activity and alerts sleep state. It’s a very groundy and earthy scent and it is characterised by a heavy molecular weight that makes it evacuate slowly.

The artist was very much interested in the symbolism of roots, that start growing beneath the earth but then give rise to the life outside the ground. It is thus a limbic device, grounded both the the underworld and the outside nature. For this reason, it is the perfect metaphore for dreams, which are rooted in the subconscious realms,but simultaneously aliment our waking life. The installation was also exploring the concerns of the Anglo-European cultures of women using oriental perfumes based on amber. Politics, to refrain Western women from using such ‘unconventional’ perfumes, claimed that they would almost get stoned by them. Oils and fragrances are not just beauty tools, but they have a real impact on the brain. 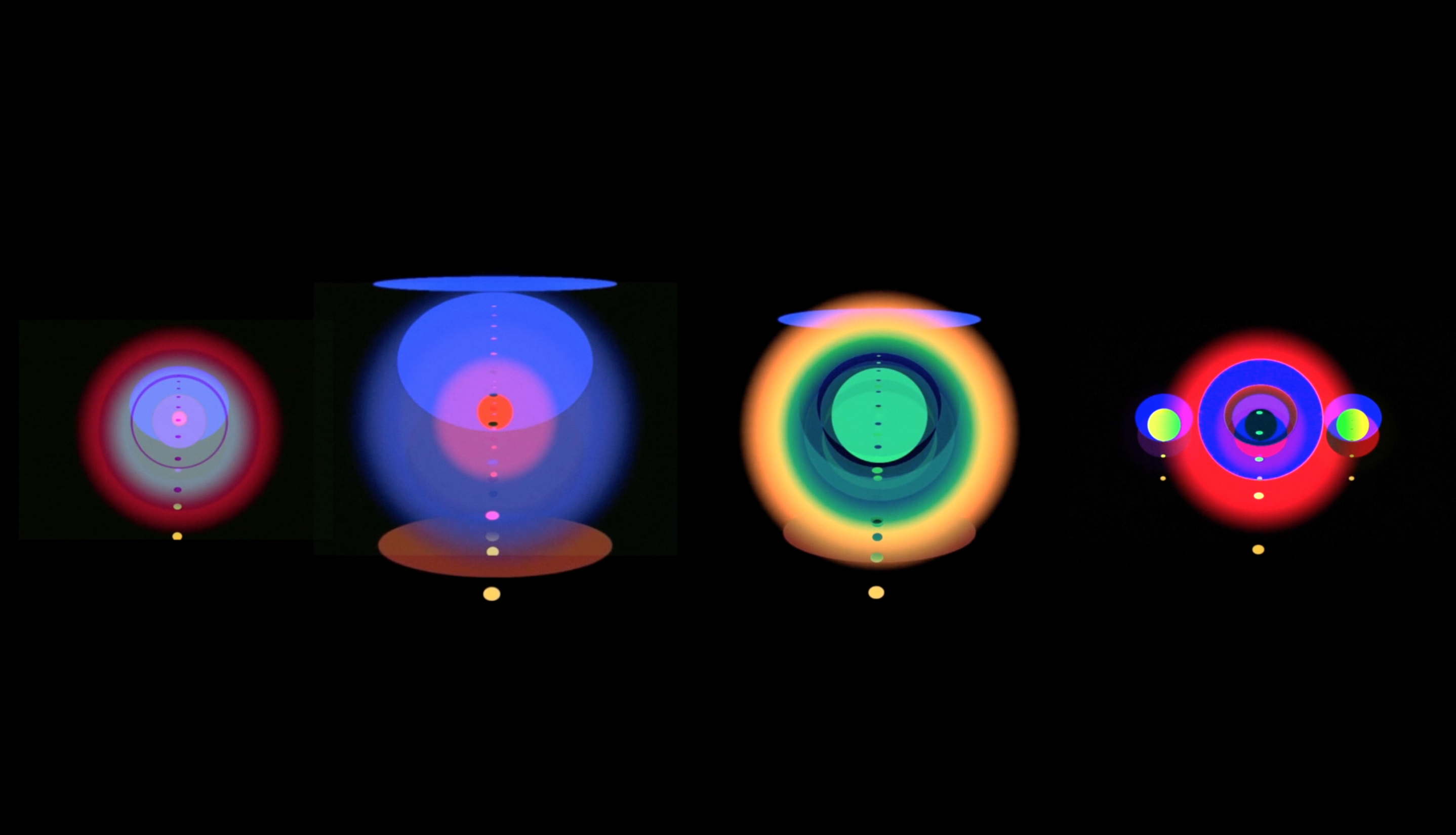 Rebecca Salvadori was in charge of the visual curation of the environment. She projected on the walls her work that had been originally commissioned by Sandro Mussida for his vinyl Ventuno Costellazioni Invisibili. In Compositions, synchronized and non-synchronized exercises of arrhythmic empathy Salvadori invented a series of animated shapes and colours re-arranging constantly in a never-ending chain of casualities. The combinations, believed by the artist to happen almost naturally, never repeat. In this way they try to escape from the perfection and predetermination of machine-like reproductions. The artist affirmed that this beak with mechanisation was a result of her personal experience as a film maker. She was obsessed with documenting and always filming everything.

‘But then I realised I was disappearing within this reality. I was just behind the camera. So i stopped filming and i focused on the movement coming from the inside rather than outside. That’s how I started coding shapes. I actually hate sleeping… I enjoy reality and hate the idea that at some point you have to switch off. At night the world stops and I am on my own and get very creative.When I started using geometric constructions, it was 3 or 4 in the morning, and this new way of visualising shapes just came out so naturally for me that i realised it was just my language. It belonged to me’. 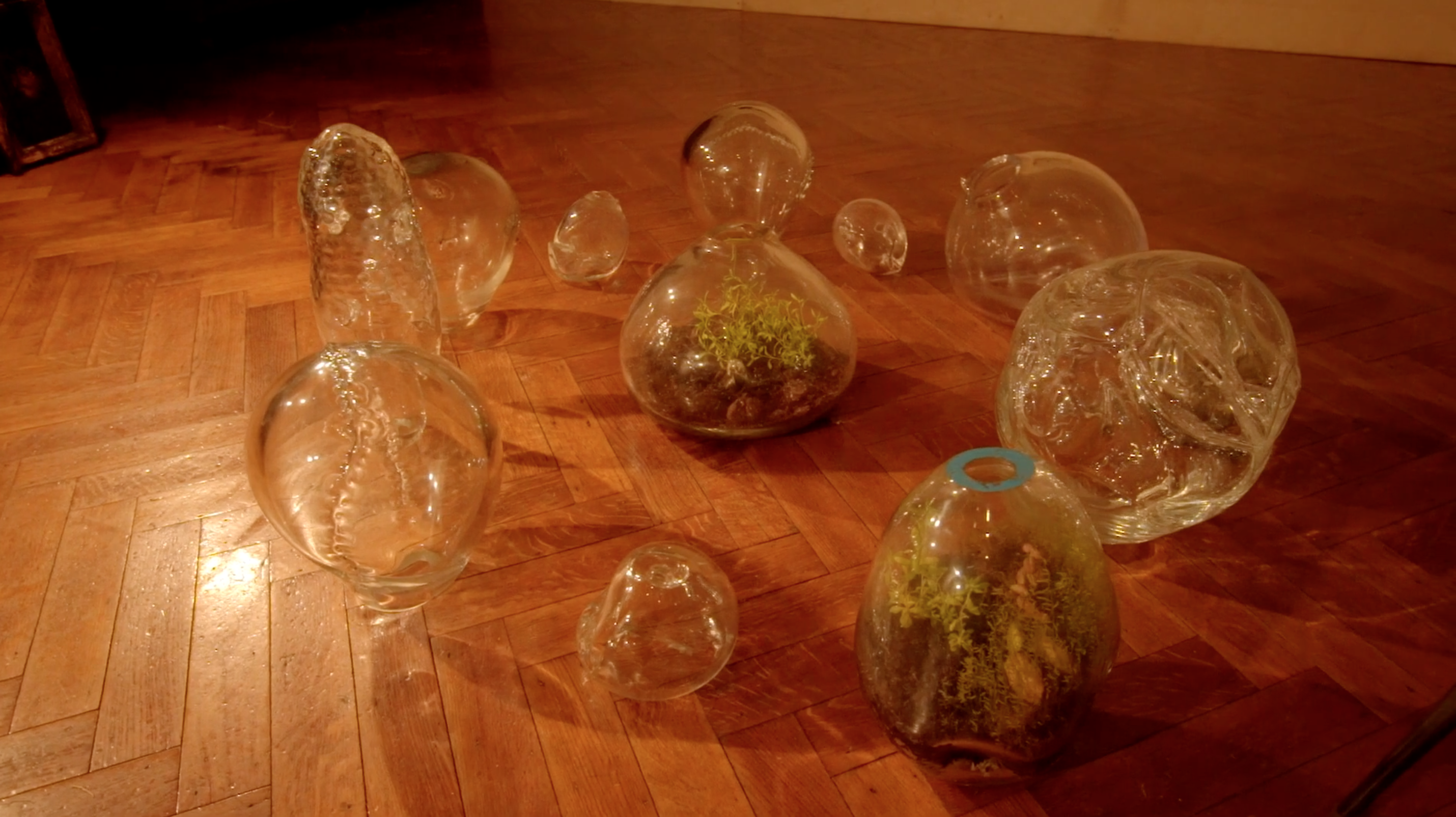 In the lower ground of the museum resided the anthropomorphic glass formations of Camille Emson. Twelve biomorphic sculptures made of clear glass were scattered around the floor in a circular pattern. some of them were empty while others were filled with ground and plants. Sitting next to them, a hand-blown cylinder with a speaker inside, circulated a series of sounds and vibrations. The vessel was topped up by a  cover, perforated with minuscule holes that let the vibrations free. Visitors were invited to interact with the sculpture by spreading white sand on top of it. Thanks to the tremor caused by the speaker, the sand would move around, rendering tangible the energy of sound. 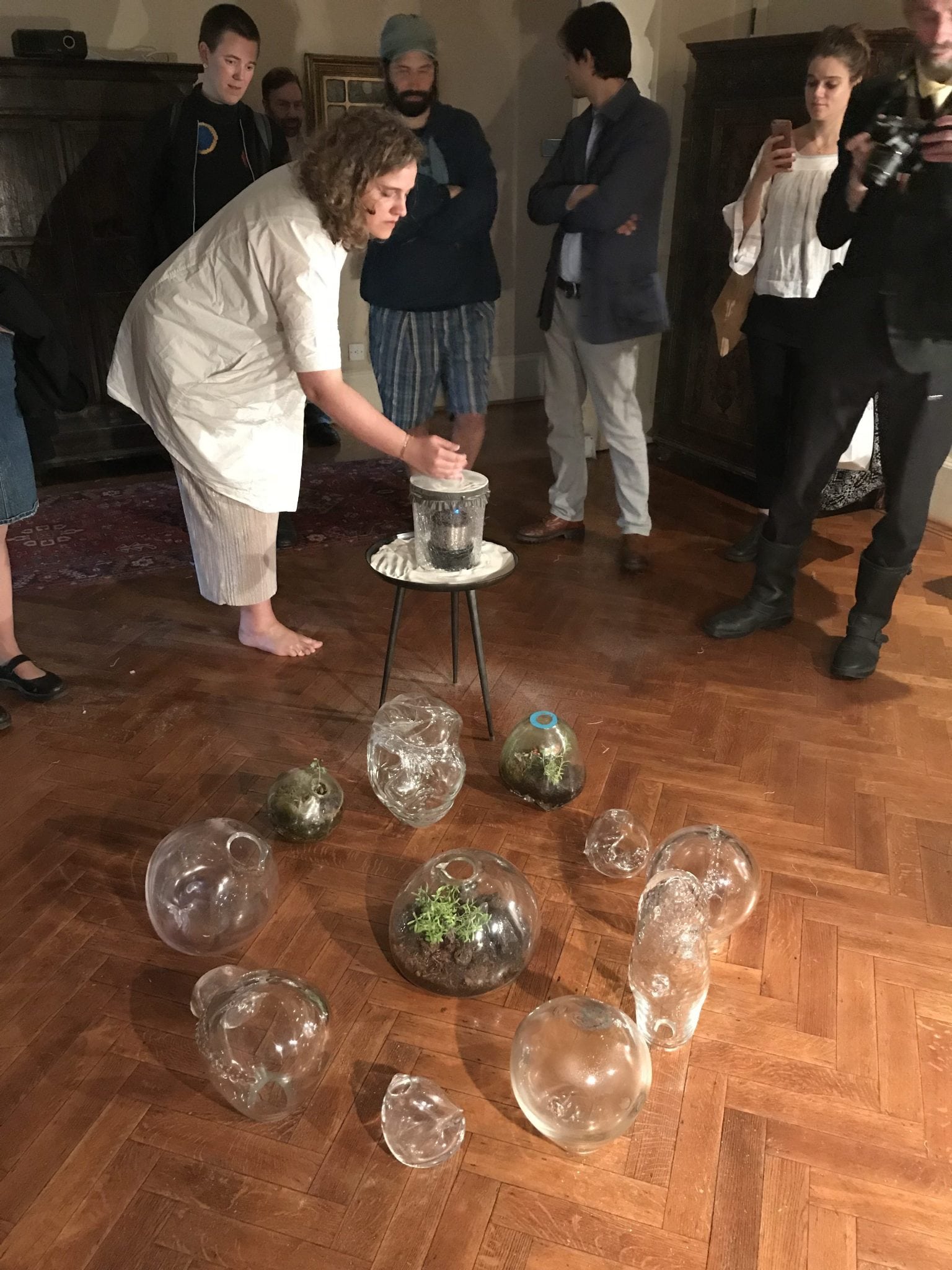 Camille is both a dance therapist and an artist. Her knowledge of dance performances and the analysis of traumas alimented her artistic practices.

‘I am curious to discover how we process trauma and emotions through the body and movement. I wanted to understand the psychobiological shift that takes place in our body when we heal and process a trauma. When I make sculptures of glass,  I always have my body in mind. I think about its motions and the shadows it creates. To use sound was a new thing for me; this was my first time’

All d.Rem events will be accompanied by a radio program of new and existing sound commissions to be broadcast from June 2018 onwards on Proposition Radio. Each episode is a soundscape lasting the duration of an REM sleep cycle, roughly 90 minutes, to be slept through. Mimicking the cyclical stages of the sleeping mind, the resulting soundscapes flit from silence to resounding repetition. As they reverberate through sleeping minds, they may cause dream ripples. Listeners are invited to write in with their interpretation of the sound and how it affected their dreams.