This will be The Victoria and Albert Museum, London, third collaboration with La Biennale di Venezia for the 16th International Architecture Exhibition. In the Pavilion of Applied Arts, the V&A will present Robin Hood Gardens: A Ruin in Reverse, centred around fragments of Robin Hood Gardens that will be transported to Venice from Poplar, East London. These concrete fragments come from the internationally recognised housing estate by Alison and Peter Smithson, which is in the process of being demolished. In 2017, when destruction was imminent, the V&A salvaged a three-storey section of each façade and the original interior fittings of two flats. 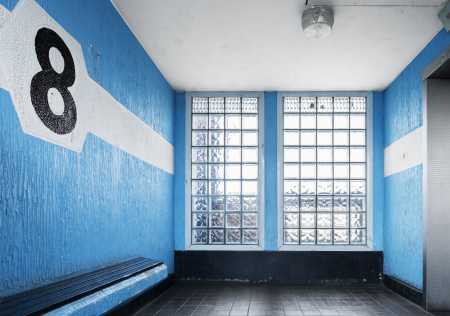 Designed by British architects Alison Smithson (1928-1993) and Peter Smithson (1923-2003) and completed in
1972, Robin Hood Gardens is an internationally significant example of Brutalist architecture. It was the
culmination of twenty years of research by the Smithsons into social housing. They intended it to be ‘a
demonstration of a more enjoyable way of living … a model, an exemplar, of a new mode of urban organisation.’ Fewer than fifty years later, the building is being demolished, having controversially been denied protection by listing, and will be replaced by a £300m redevelopment of affordable and private housing.

In Venice, three storeys of the façade will be reassembled on a scaffold designed by ARUP, who engineered the original building, with muf architecture/art, who first proposed the V&A’s acquisition of the fragment. This structure will allow visitors to stand on an original section of a ‘street in the sky’, the elevated access deck designed by the Smithsons to foster interaction between neighbours.

Inside the pavilion, the V&A has commissioned a new work by Korean artist Do Ho Suh, whose practice centers
on capturing memories and questioning the meaning of home. Using the latest technology in 3D-scanning and
photogrammetry and projected on a 13m-wide screen, the camera moves along the walkways and appears to cut through the building, depicting and revealing domestic interiors within the modular plan. Do Ho Suh’s
installation presents a panoramic record of the architecture and interiors before they are torn down.
Through archival photographs and specially recorded interviews, the exhibition looks at the vision and fate of Robin Hood Gardens and asks what we can learn from its ruins. In 1976 the Smithsons contributed to the
Venice Biennale where they displayed a billboard-size photograph of Robin Hood Gardens under construction
and a bench based on one of the concrete columns that articulate the façade of the building. ‘A building under assembly is a ruin in reverse’ they wrote.

While the Smithson’s building is destroyed, there is a bittersweet circularity in bringing a fragment of it to Venice, where they contemplated its original promise. Now that the ‘ruin in reverse’ has become a real ruin, what lessons can we learn from its ideals and fate? In the context of unprecedented urban pressures and the redevelopment of numerous post-war housing projects, what is the future of social housing?

The exhibition arises not only from the V&A’s collection of the fragment of Robin Hood Gardens, but also
responds to the theme for the 2018 Architecture Biennale which, in the words of Irish architects and curators Yvonne Farrell and Shelley McNamara, ‘encourages reviewing ways of thinking, new ways of seeing the world, of inventing solutions where architecture provides for the wellbeing and dignity of each citizen of this fragile planet.’

‘We are proud to continue our innovative relationship with La Biennale di Venezia and its formation remains one of Martin Roth’s great achievements during his directorship of the V&A. As the only international Special Project to be presented for Freespace, the 16th International Architecture Exhibition of La Biennale di Venezia, Robin Hood Gardens: A Ruin In Reverse asks the questions that face all of us about the future of social housing.’