On the 40th Anniversary of the release of Anarchy In The UK, 26th November 2016, Joe Corré torched his entire punk memorabilia collection including bondage gear, Johnny Rotten’s trousers and a tiny swastika-sporting Sid Vicious doll. It followed a year of punk celebrations orchestrated by the Museum of London, the British Library, the British Film Institute, the British Fashion Council, the Heritage Lottery Fund as well as the Mayor of London. 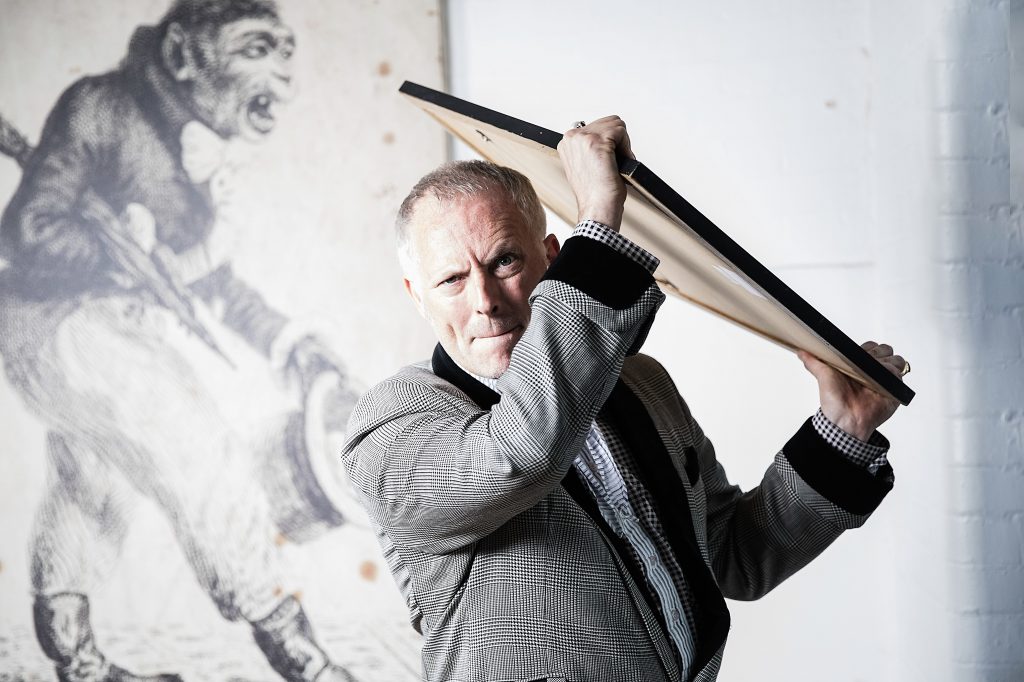 Joe Corre son of Malcolm Mclaren & Vivienne Westwood with original punk items which he burnt on the 26th November 2016 on the eve of the 40th anniversary of Punk. Estimated at 5 million pounds the collection. Self Assignment

Corré was highly critical of the shameless commercialisation of punk by the State and corporate sector:

“With Virgin Punk credit cards, Punky McNuggets, Punk Fairy Liquid, bondage trousers from Louis Vuitton and punk car insurance, something needed to be done to put a stop to the rot”

The pile of ash from the highly controversial £5 million Punk memorabilia burn is to be immortalised in a dramatic artwork by Joe Corré, the son of Dame Vivienne Westwood and former manager of the Sex Pistols, Malcolm McLaren. The one-off presentation will be at Lazinc in Mayfair, London.

About Joe Corré:
Joe Corré was born on 30 November 1967, in Stockwell, London to Vivienne Westwood and The Sex Pistols’ former manager and entrepreneur Malcolm McLaren. His surname comes from his father’s maternal grandmother, who was a Sephardic Jew from Portugal. As a child he would wear his mother’s designs long before they were popular. He would hang out with the Sex Pistols and regards them as his favourite band. He has one daughter, Cora Corré, to his ex-wife Serena Rees. They both founded Agent Provocateur in 1995, selling it to 3i in 2007 for £60m. Corre?’s boutique A Child Of The Jago celebrates its 10th anniversary this year.

About Burn Punk London:
Joe Corré’s definition of Burn Punk London, “In 1976, Punk’s challenge to the establishment, its message of discontent, the Rebel Yell from generation No Future, underpinned the DIY creative empowerment for change. That was the inspiration for the creation of these original punk objects at their inception. In turn, this is why they have any value or meaning today. If I don’t make a stand to defend these values before they are lost entirely, as they sink to the bottom of the commercial cultural soup – no one else will! These items would become worthless to me; a shrine, icon or fetish to something that doesn’t exist. Oscar Wilde talked about people knowing the price of everything and the value of nothing. It’s time to really think about that. There are parallels to be drawn with the current cultural and political oblivion we are experiencing. Burn Punk London is a necessary act to remind the public and wake them up.”

ABOUT HUMANADE:
Formed in February 2008 by Joe Corré. In commemoration of Malcolm McLaren’s life, his family have chosen the Humanade foundation because of its efforts in supporting highly significant human rights issues and abuses and its efforts in addressing those. Humanade has supported the INGA Foundation, Climate Revolution, Privacy International, Reprieve and redress. The principles of Humanade are to operate at extremely low or negligible running costs and to allocate funds to organisations or individuals who provide direct action and results at the front line. If you would like to support Humanade, please contact us via email: anisa@thetwentyfifthhour.com. Registered Charity Number: 1116112. The trustee board includes Joe Corré, Ben Westwood and Clive Stafford Smith OBE, a British lawyer who specialises in the areas of civil rights and working against the Death penalty in the United States of America.