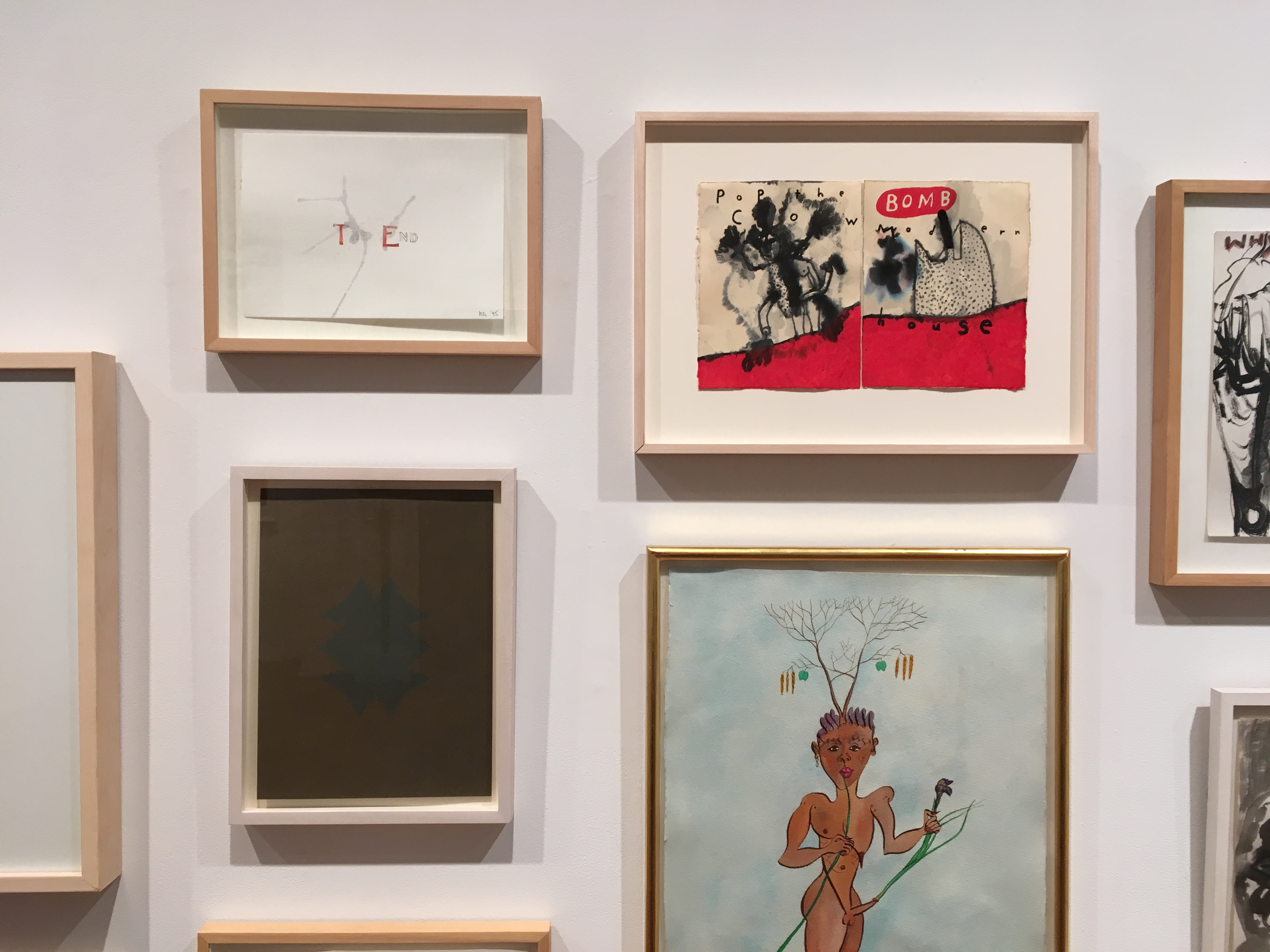 A beautiful townhouse, located on 76th Street, is currently hosting a tribute to Jack Tilton. The gallerist was best known for truly nurturing talented contemporary artists such as Marlene Dumas, Kiki Smith and Douglas Gordon in their early years. The show comprises a selection of works over 35 years by the very artists Tilton represented. We are greeted by a warm light quite different to the stark cold white one often associated with contemporary galleries. This already makes the space feel like a home and, by extension the works feel as if they have been passionately collected rather than displayed for the purposes of selling. Walking past the Ruth Vollmer and Douglas Gordon we find ourselves in the main room where several works on paper – each with its own light wooden frame – are presented. Jan Fabre’s ballpoint pieces, David Lynch’s watercolour with a transfixing red, Dumas’s ink washes and Alan Johnston’s gold leaf and paper works are the ones I was most drawn to. As we continue, Richard Tuttle’s 13 Angels for Jack accompany us to the second floor, where we find Dumas’s oil portrait of Tilton. 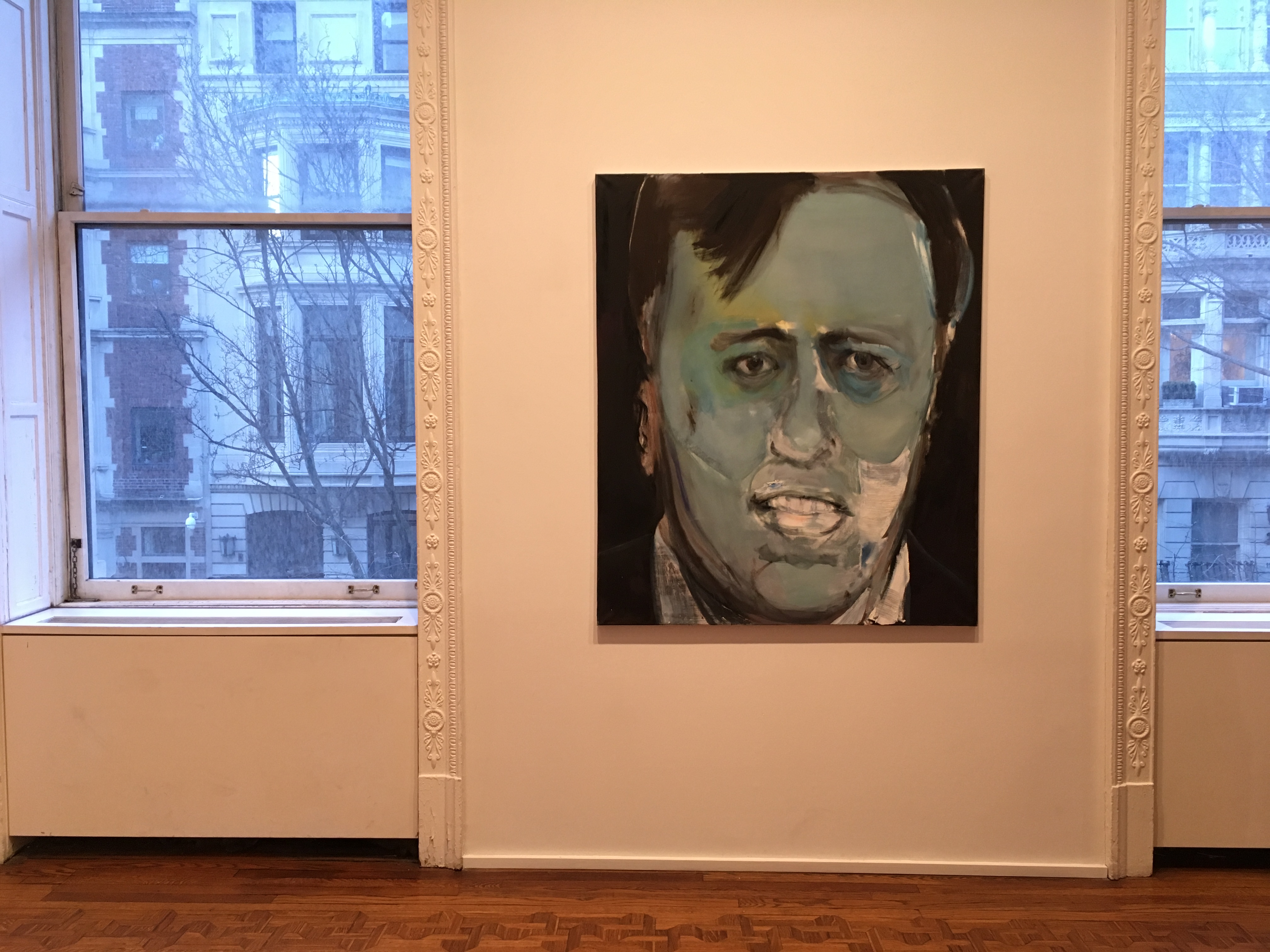 Placed above the fireplace, in the same room, is Ligon’s Untitled (Study for I Feel Most Colored) whose text reads like a beautifully haunting chant. The gallery has also produced, as a companion to the show, a publication detailing Tilton’s exhibitions from 1983 when he opened his gallery on 57th Street until today. Readers will undoubtedly note not only how many incredible artists are featured each year but also how often the names recur, suggesting that the relationship between them and Tilton was truly close.

Given Tilton’s strong ties to Chinese contemporary art (see his residency for artists, China Project) it was interesting to discover Liu Shiyuan’s Isolated Above, Connected Down at Tanya Bonakdar Gallery. This is the artist’s first major solo exhibition in the US and is definitely worth a visit. Starting with the video work found in the first room, visitors are encouraged to sit on the patterned carpeted floor. 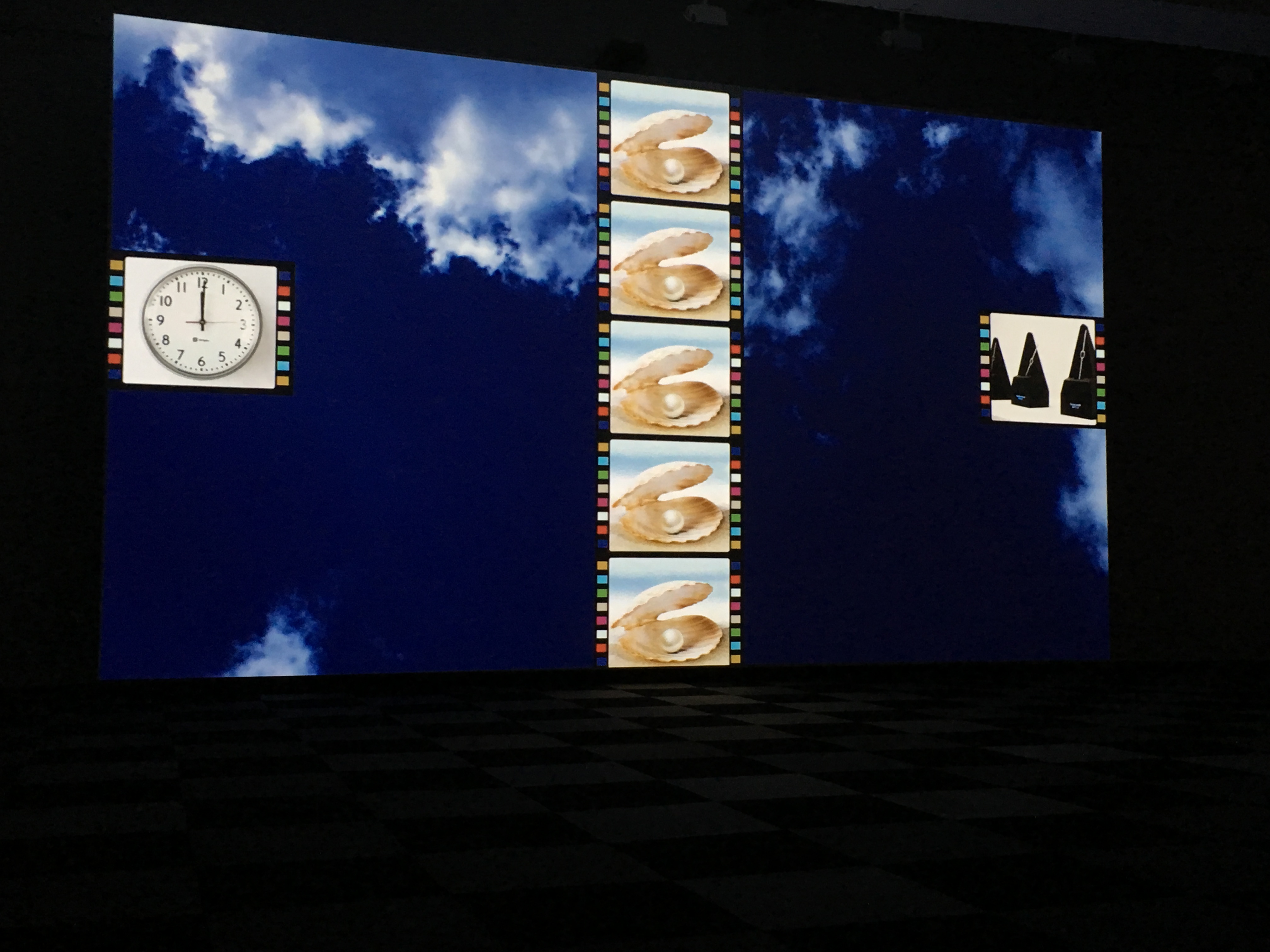 Liu Shiyuan – Isolated Above, Connected Down

We open with a clear blue sky and slowly strips mimicking those of a slot machine appear on the side of the screen. Seemingly innocuous when at first they display clocks, the strips become increasingly disturbing as the sky becomes completely covered in images of raw, processed meat. A man and a woman, sitting at a dinner table appear next. Before them lies a duck – the subject of their first discussion. The exchange between them is hyper intellectual, incorporating contemporary art references, theories of aesthetics and economics and resembles an endless tennis match. Whilst the points made seem unconnected and inconsequential, the tension keeps on mounting and the scene starts to bear resemblances with Albee’s “Who’s Afraid of Virginia Woolf?”. Further unease is produced by close ups of a bee, lying dead near the crispy duck as the characters wonder whether it could die from overeating. We are made to focus on the insect, as the dinner scene is replaced by a white screen and the bee, lacking any form of agency, is swept around in its horrifying body. Although the video work is almost too captivating to be followed by anything else, Shiyuan’s show continues upstairs with a series of six photographs. 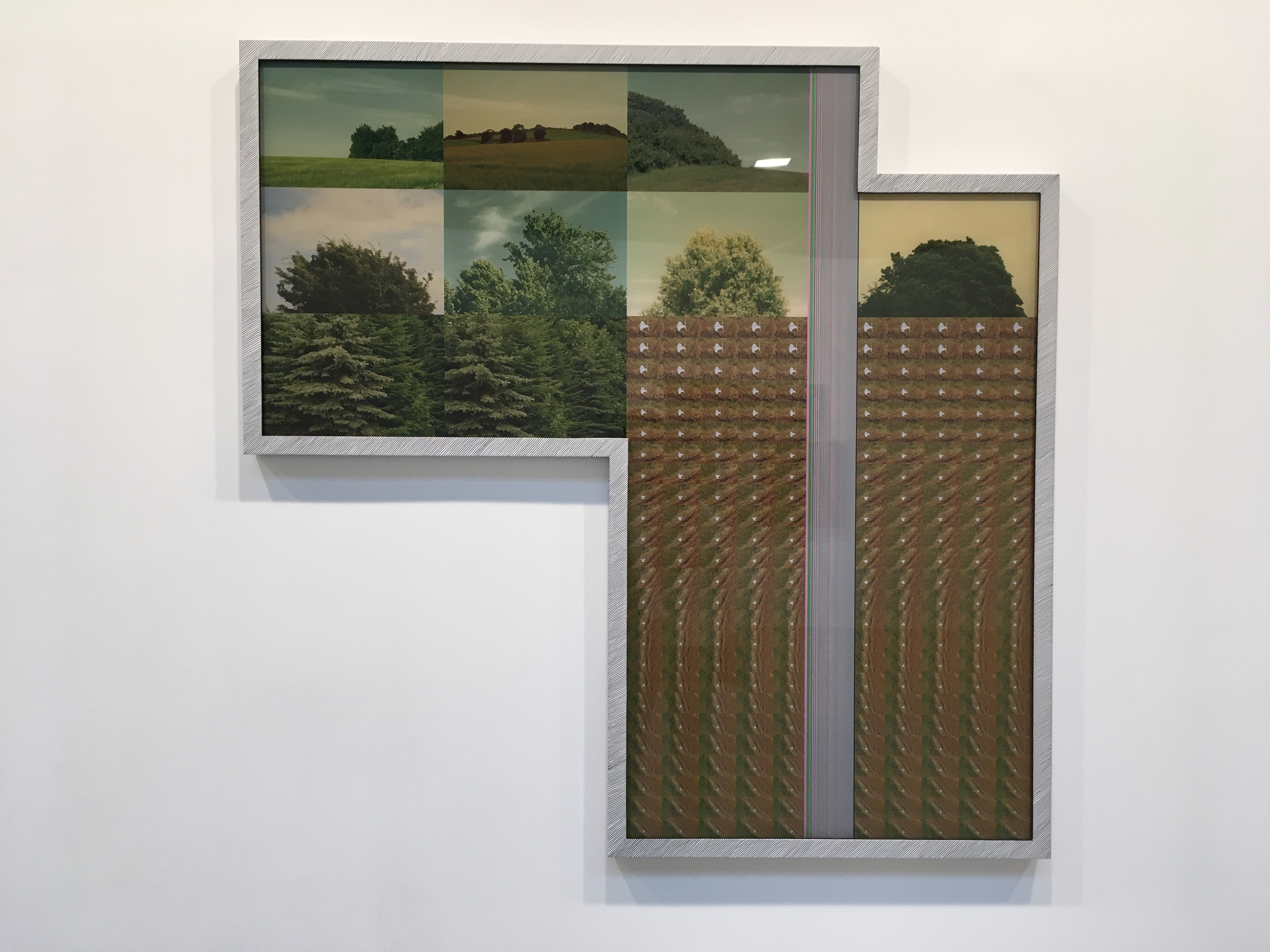 Much like the strips described, these pieces are compositions focusing primarily on animals and food – combined to create unsettling amalgamations of internet images, 35mm photos and computer rendered stills.

I then headed to Pace as it was hosting the most comprehensive exhibition of Ryman’s drawings to date. Even for those familiar with his work this was an unmissable show as the pieces ranged from his early experiments in the 1960s up until 2000 and were sourced from private collections and institutions such as Dia and MoMA. Further, the majority of the works have never been exhibited publicly before whilst others have not been seen in decades. Unsurprisingly Pace has produced a detailed catalogue to accompany the show. 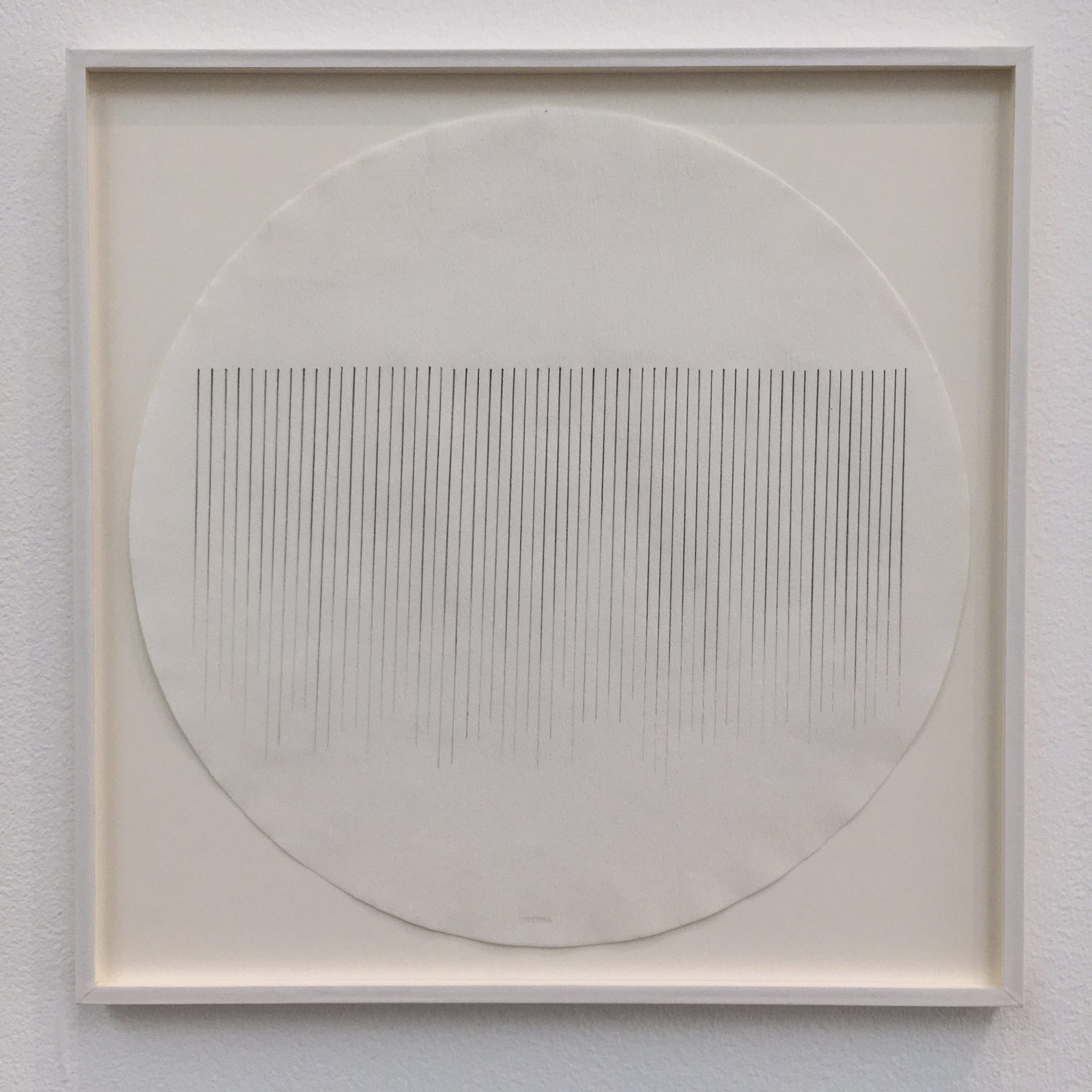 The gallery was basked in natural light, making Ryman’s remarkable details all the more pleasant. We start with Ryman’s Stretched Drawing from 1963 and, as we make our way around the white walls we find the artist experimenting with a variety of materials. I am particularly partial to his graphite on Chemex filter paper series – especially his Untitled (1966). Ryman focused heavily on the line – the surface it would appear on, the way in which light would shine on it. This is exemplified in the three pieces stuck to the wall with camel coloured plaster tape in the second room. Whilst their composition is identical, since the three sheets of paper have slightly different tints, the blue line cutting across them appears to assume new hues. I spent a great deal of time before Ryman’s watermark series. 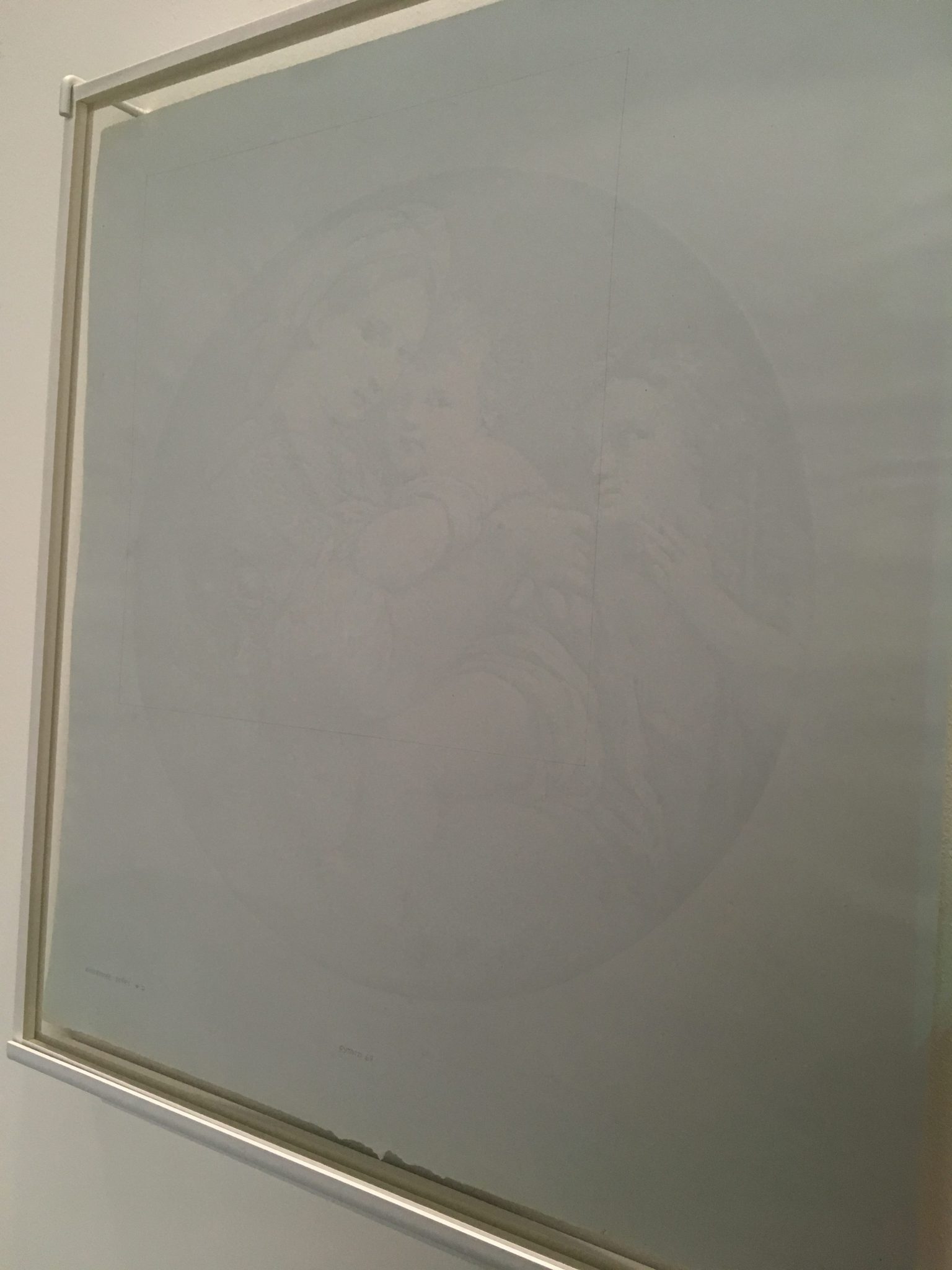 On a delicate light blue paper a faint watermark of a mother carrying a child with an angel by its side appears. Each of the pieces in the series changes in that Ryman choses to draw a square or rectangle enclosing a different portion, thereby shifting the focus every so slightly each time. Visitors cannot but leave enamoured of Ryman’s work.

Finally I made my way to James Cohan as I am obsessed with Bill Viola (and did in fact see this show twice). Viola is famously known for his experimental video installations. Visitors of Botticelli Reimagined at the V&A a few years ago might remember his stunning The Path, from Going forth by Day (2002). One of the greatest aspects of this show is that only two works are displayed, namely Moving Stillness: Mount Rainer (1979) and The Sleepers (1992). As both have the ability to place us in a meditative space not being overwhelmed by other pieces is truly a luxury. Starting with Moving Stillness we see a screen suspended over a sizeable body of water. Mount Rainer is projected upon it as three distinct beams behind it create the image on the pool’s surface which then bounces onto the screen. 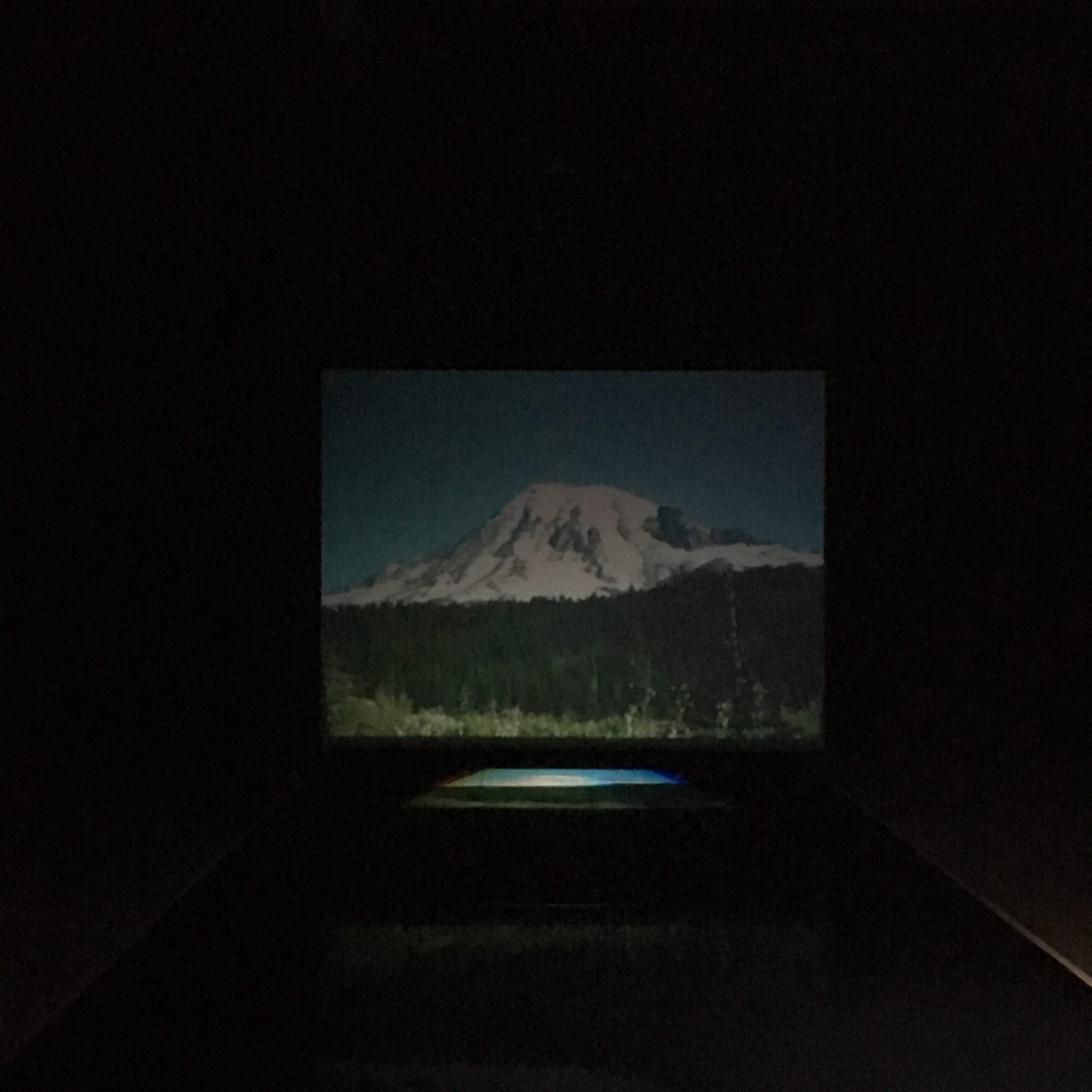 As an evocative soundscape envelops us, the gallery assistants periodically disturb the water causing the image to unravel as beautiful refractions reveal themselves. Viola in describing the piece said that the mountain itself never moves, only our mind does. He plays with our perception of light and sound as well as exploring the inherent fragility of nature and images. In the second room we find seven white barrels emitting a soft blue glow. As we peer in each of them, we find a black and white monitor displaying a recording of someone sleeping continuously. 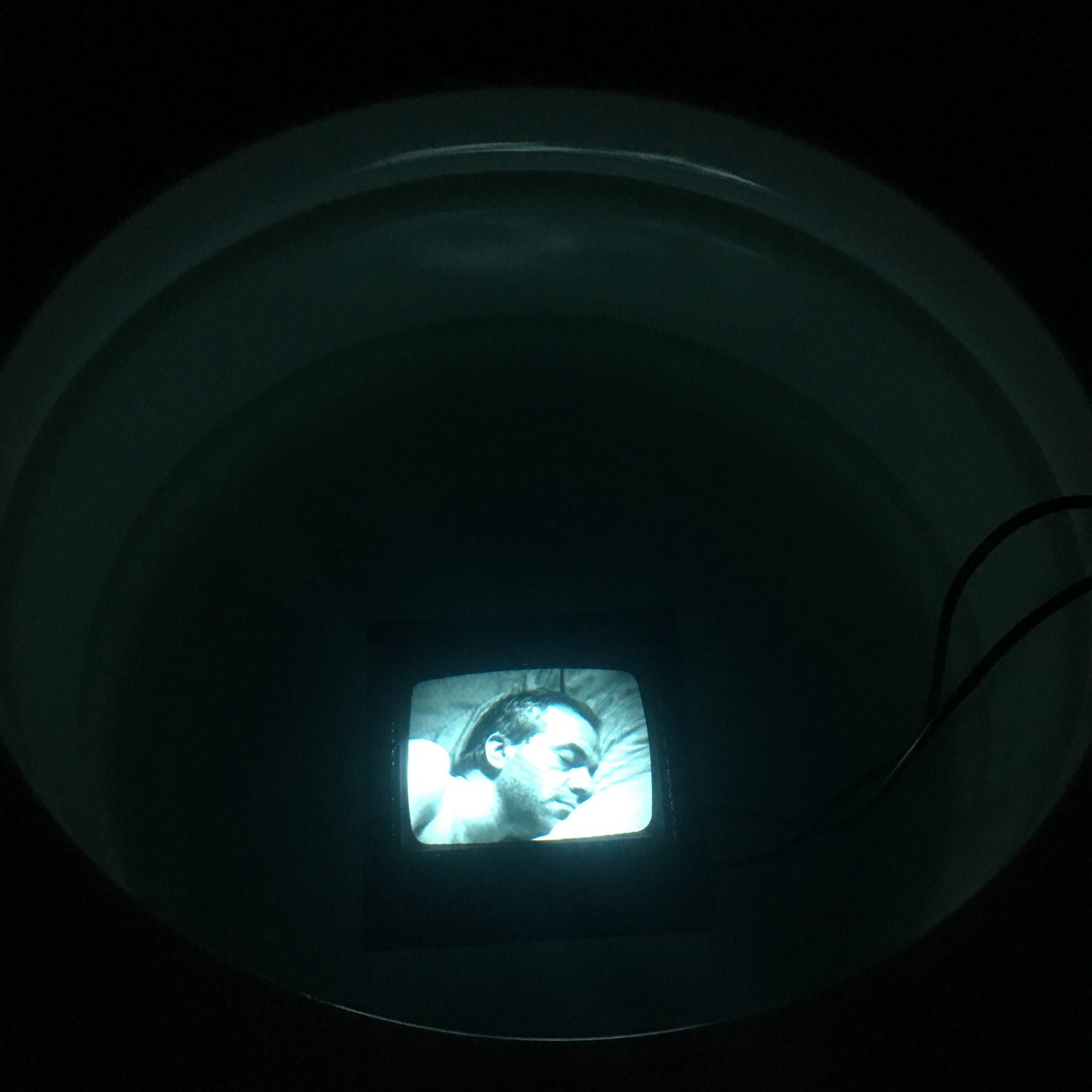 Each of The Sleepers occasionally moves although imperceptibly so. They remain submerged in water and isolated from each other in a blissful state of slumber. The glow is so alluring that visitors will easily find themselves absorbed by the monitors, losing track of time. Viola’s works have the capacity to make us reflect, zone out and play with our thoughts and this show is no exception.

For those currently in New York…

In Tribute to Jack Tilton is on at Tilton Gallery on 8 E 76th St until 28 April.

Liu Shiyuan’s Isolated Above, Connected Down is on at Tanya Bonakdar Gallery on 521 W 21st St until 7 April.