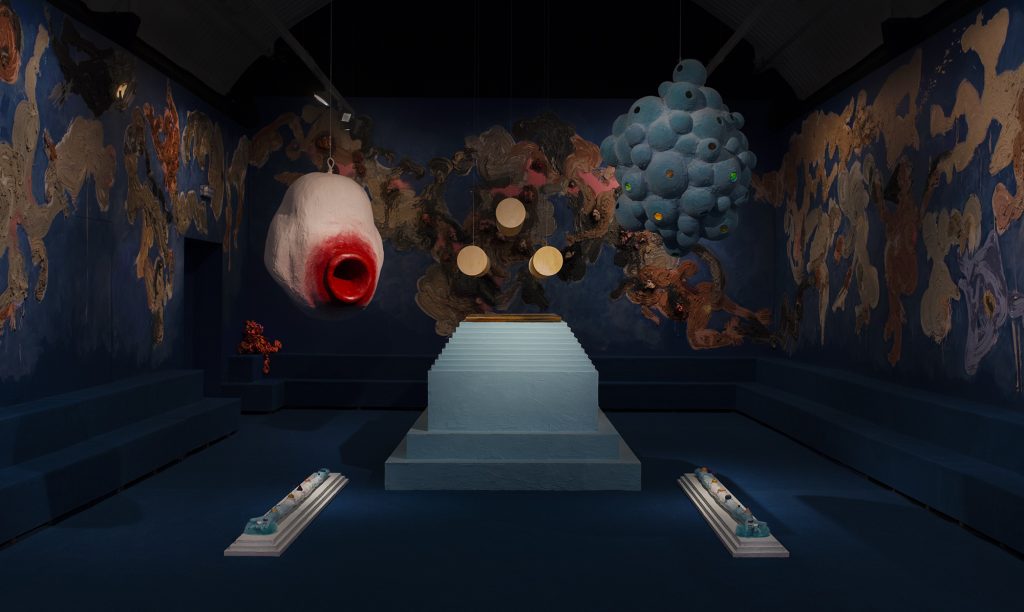 Merz is a made up form of art that was created by Kurt Schwitters as a response to the destruction and fragmentation of man made society. Schwitters developed his practice initially through his collages of found objects and expanded the form’s scope to create new imaginative environments such as the Merzbau in Hanover during the 1930s, a second Merzbau type project in a shed at his home in Lysaker and then post-war toward the end of his life in the Lake District, Merzbarn.

Schwitters created grotto like interiors within existing structures.  A form of psychological collage that drew from fragmented every day biographical artefacts and other ephemera from his social existence.  The environments that he created presented shapes, forms and matter in seemingly ever shifting into new abstract nuances of perspective and dimension.  Merzbau was smashed and burned by bombers in WWII.  Merzbarn, exists now only in recovered fragments as museum pieces after recovery from their original isolated rural site.

At the Wysing Arts Centre in Cambridgeshire, the newly commissioned collaboration between Tai Shani and Florence Peake entitled Andromedan Sad Girl, presents the lost site of a made up civilization.  The venue’s gallery space transformed into an immersive environment that imagines the preserved ceremonial space of a pr or post patriarchal  society.  It may not be conscious twist by the artists of Schwitters but the comparison is fair.

The centrepiece alter, principally the responsibility of Shani, is enveloped by friezes created by Peake in collaboration with dancer Eve Stainton, that recall the grotto like abstractions of Schwitters’s barn.  It is adventurous and ambitious.  One wonders what meanings are encrypted within the hanging sculptures and the walls with their three dimensional rendering of abstract forms but taking a cue from the pre-linguistic nature of the sound piped into the installation, whoever in the alternative reality built this place they were seeing the world through different rules and that realisation allows one’s imagination to enjoy an art induced trip. 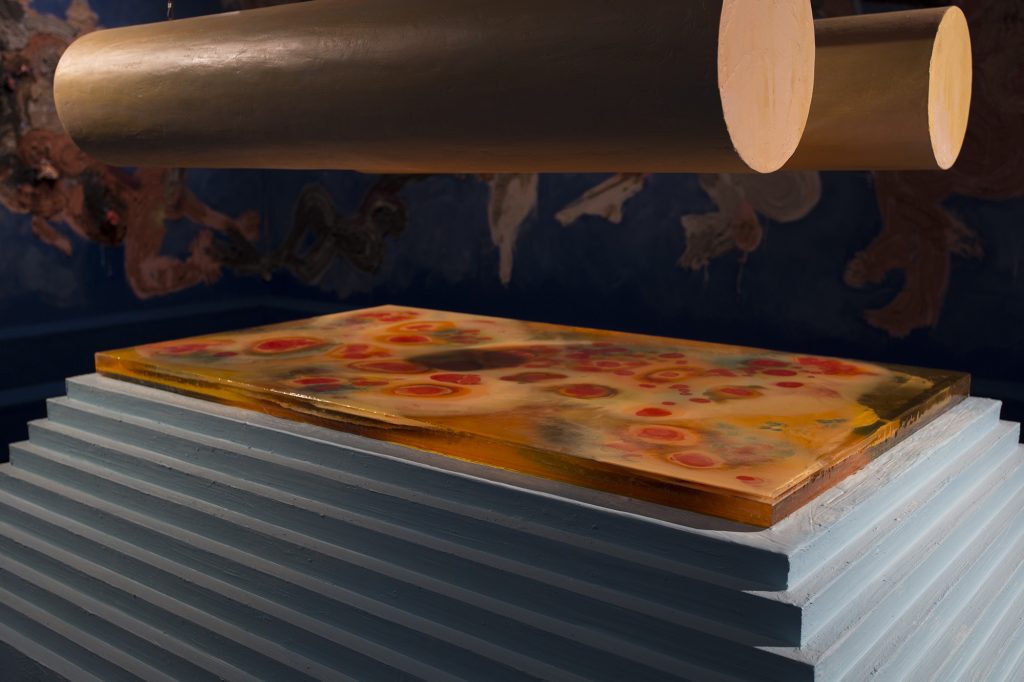 Shani’s contributions are akin to a psychedelic temple, the objects are veiled in the mysticism of an altered state of consciousness and part of the fun of this exhibition is that the rule book of interpretative symbols has been ripped up, thrown out into the middle distance of the Cambridgeshire countryside and the resulting artistic liberties subsequently arranged within the Wysing’s barn like gallery space.

Whether or not the alter for sacrificial rituals or not is left to the imagination.  This exhibition is outrageously risky on the part of the artists and the Wysing because it is so bold and the subject matter is vast.  One imagines that this could be a gateway to a much larger complex in some far away space accessible through either time travel or an induced altered state of consciousness.  The result is a mixture of the interesting, aesthetically engaging and to some degree unsettling.

Peake, who had a residency at the centre in 2016 was invited to work with Shani on this new project, which has been realised in full over the last few months.  Likewise, the immersive experience is enhanced through sound elements that feature vocals from Peake produced in collaboration with another recent Wysing art in resident and composer, Maxwell Sterling. 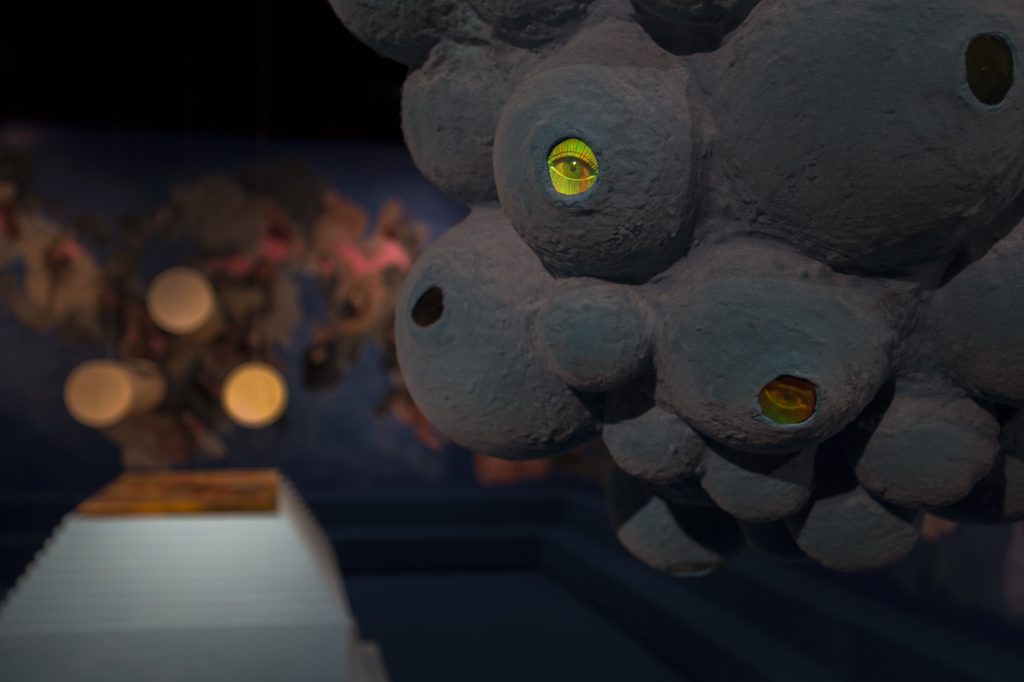 The risk has paid off. Not only because in the depths of the Cambridgeshire countryside, there is (until the 19th of November at least) this surreal door way into an immersive alternate reality but because it also signifies the result of bold curation and collaboration that make the Wysing the remarkable place that it is.  It has parallels with the masterful ingenuity of Kurt Schwitters, he himself the creator of new worlds and environments that reflected the shattering and re-arrangement of civilization in the 20th century.   In fact, what it also has in common is the plain upfront boldness to speak of its own world and one hopes that this first creation is given the opportunity to grow and develop into new experimental spaces.

On November 4th, there is an opportunity to see the space inhabited by some kind of ritual of its own.  An event that will feature a reading Tai Shani’s on-going project, Dark Continent Productions which an experimental and expanded adaptation of Christine de Pizan’s feminist text of 1405, The Book of the City of Ladies.  Simultaneously accompanying the reading will be Peake and Eve Stainton performing a respresentation of interpenetrating waves of energy transcending through time and space, demonstrating some of the processes used to create the wall friezes.

It seems more than fitting that this temple to the artists’s imagination should be given its own ceremony.  As one anticipates that this is likely to reflect the vibrancy of this strange, memorable and mysterious installation, it should transform it from a lost site to temporarily accessible alternate reality.   Appropriately for its rural location, albeit just fifteen minutes from Cambridge, such adventure does make one think of going down into rabbit holes, through the backs of wardrobes and other brave, fantastical portals of the mind’s eye.