Artist Trish Wylie is best known for her cinematic canvases inspired by iconic Western movies, traditionally with a male cast as the lead. For her imminent solo exhibition ‘I Rose Madder’ at John McAslan + Partners (5 October to 10 November), Trish casts herself as the hero, putting a post-feminist twist on the Country & Western movie genre from the point of view of a female artist living through an era of celebrity culture obsessed with the perfect female image. Lee Sharrock talks to Trish about the show. 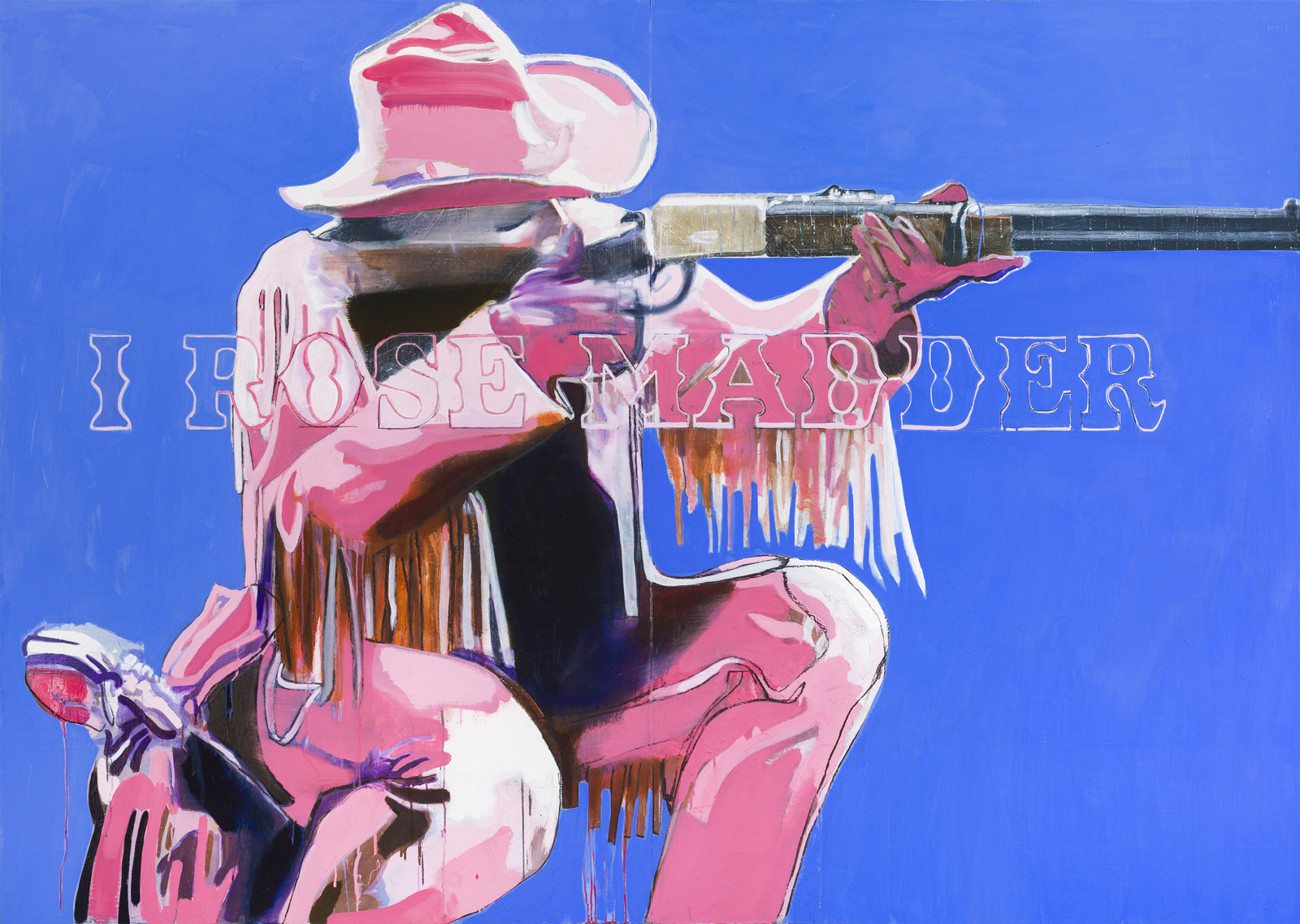 Lee Sharrock: Where does the exhibition title ‘I Rose Madder’ come from?
Trish Wylie: It comes from the colour Rose Madder, which is a fugitive pigment meaning the colour is not fixed and changes over time, its the colour that I have used to paint myself and by adding I, changed the words from a noun to a sentence, so for me the colour has a symbolic value as well as a physical value.

Your older body of work is heavily influenced by Country and Western movies.  Why is that genre of cinema such a big influence on you?
I was a child of the late 50s and 60s and TV was a big influence – Westerns were a daily staple – cinema was a weekly visit- inside they were luxurious, and dark, another world that love has been with me ever since. The films of Sergio Leone and John Ford have been such a big influence they were brilliant story tellers and I love the subversive aspect to the story telling of Leone.

You have put yourself in the frame in your new solo exhibition, with several self-portraits as a Cowboy.  Yet there is a predominant use of Pink.  Is this a comment on feminism and the stereotypical use of pink for girls and blue for boys from a young age?
Partly, Rose Madder is a colour I keep returning to – red is a colour of vitality and danger…but yes the cultural perceptions of that colour are intentional – mixing up the expectations and hoping to raise questions. Pink was originally used for boys and gradually changed during the 1930s and 40s to girls.

The self-portraits remind me of Cindy Sherman’s self-portraits where she poses as different cinematic or imagined characters.  Is her work an influence, or are there other female artists such as Gillian Wearing who have influenced you?
Yes I admire both those artists work, I am drawn to the psychological and emotional aspects of their work, and I have always been interested in artists who use photography as their medium, painters that have influenced me have been Helen Frankenthaler and Artemisia Gentleschi, both centuries apart and they are such brilliant painters and in terms of current painters I am very interested in the work of Jenny Saville, I willl always go to see her work.

Sir Christopher Frayling, ex-Rector of the Royal College of Art, has been a big supporter of your work and has written catalogue essays about you in the past. How did he discover your work?
I contacted him and invited him to a solo show I was having in London ten years ago and he immediately showed an interest, he has been incredibly supportive and we have had some wonderful conversations about film and painting.

Why do you work on such a large scale, and what is your process?  Is it influenced by the ratio of a cinema screen?
Yes they adhere to cinema screen ratios and I love paintings that are much big, larger than human size, for instance the Monets in The Orangery are incredible, I felt saturated by them and they had a powerful physical and emotional impact on me. I love working big, and would like to work much bigger, there is a freedom and a physical connection that feels right for me.

With these paintings I collaborated with the photographer Harriet Mac Sween she and I spent time shooting pictures of me dressed as a cowboy with my rifle in my flat in Shepherds Bush. It was a great shoot, Harriet and I worked well together and we got some great pictures that I used as my base for painting. I am not interested in using photography to paint in a photographic sense but I like the freedom photography can give me, although I had been drawing large self portraits I decided that having someone else take pictures of me but under some direction from me worked incredibly well.

The highest selling artists are all men, apart from Georgia O’Keeffe and Frida Kahlo, and the Guerilla Girls famously protest in their work that there are hardly any female artists in the Met.  Have you found it more difficult to get recognition because of your gender, and was it difficult to balance being a mother and bringing up children with being an artist?  This is a lament made by several prominent female artists including Maggie Hambling,  Louise Bourgeois and Tracey Emin, that it’s hard to have a family and a career.
Yes I agree but I think that is more due to society than it being any more difficult for a woman to make art than a man, however if you see fewer women making it, and encounter so many hurdles because of being a woman it is another obstacle to deal with that men don’t have to. It is slowly changing, but you only have had to go the Abstract Expressionism exhibition at the Royal Academy, to see all the women who were left out – it was absolutely shocking, and of course it continues to portray this notion that it is only men that can make art that is to be lauded and seen as forging new ideas.

How did the exhibition at John McAslan come about?
I was approached by Natasha Manzaroli who has collected my work from way back and she is a partner at John McAslan they have a gallery on their ground floor which is now the William Road Gallery.


What’s your favourite painting in the exhibition, and what was the inspiration behind it?
Good question and I am not sure yet, but I do particularly like the Animus painting, and that is referring to the Jungian term Anima and Animus in us all, which is the male and female part of our psyches. 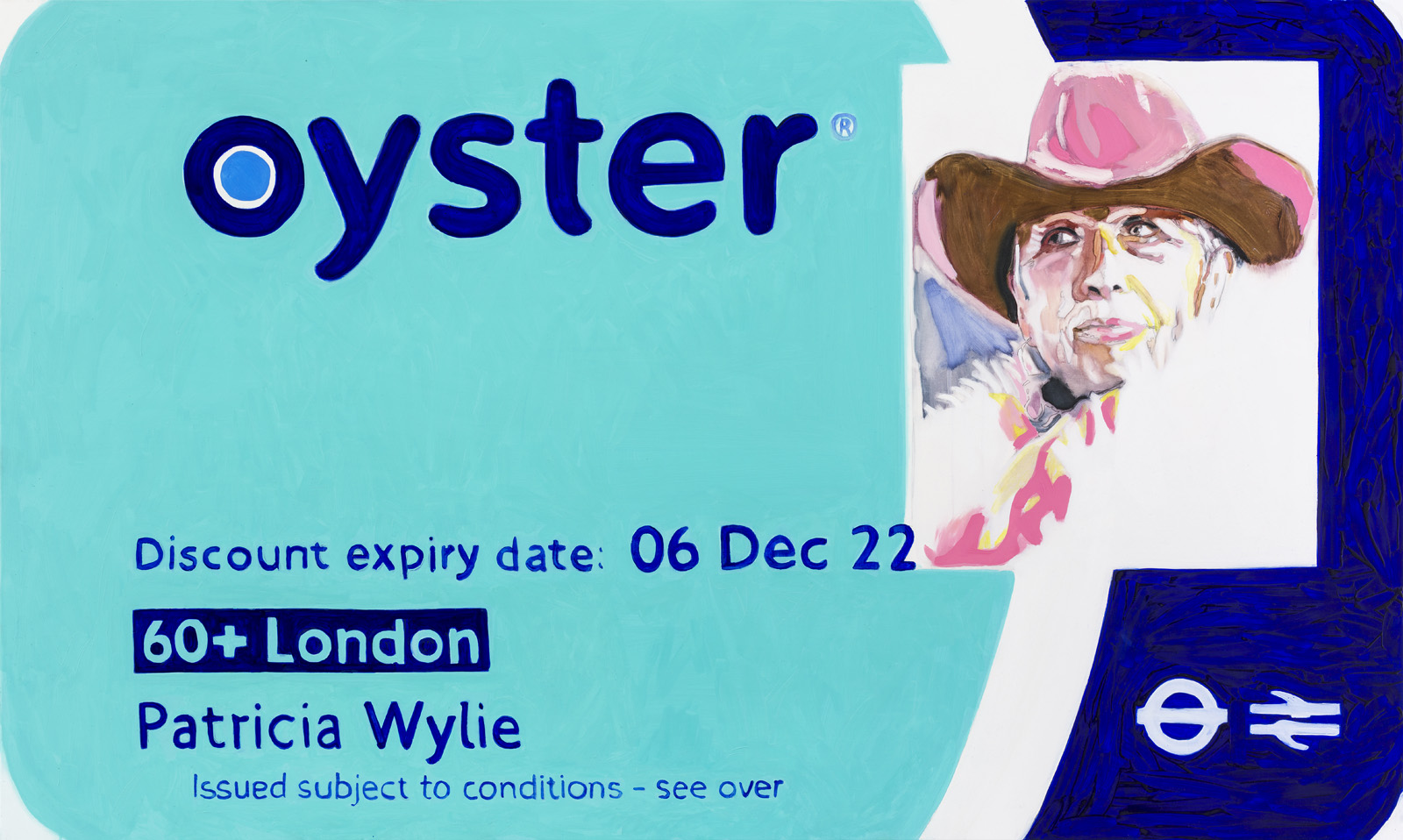 Do you have plans for any other exhibitions following the solo exhibition this October?
I would like to have another show although I am not with a gallery currently there are a few opportunities for me to explore.