We Love Robert Grosvenor’s sculpture at Karma Gallery in New York.
Three objects sit in the gallery. Things that don’t appear to be of this time or even from this realm—like they fell from the sky, or were dug up fossils—inasmuch as they appear as superlative objects at first sight. Three vessels.

Investigating positions between stillness and movement, Grosvenor’s sculptures seem to be things that are at a mid-way point, neither functionless or functional, both recognizable and absurd—always coming so close to both ends at the same time and resisting interpretation and challenging the limits of industrial fabrication. Smoothness has for some time been an attribute associated with perfection because it’s opposite reveals a typically human operation of assembling. From afar, Untitled is a group of smooth, slick machines built at the height of technological advancements of their period and place, however from a shorter distance and slower time, perspective shifts and an artists labor is revealed. Through formal conventions of sculpture making, such as the manipulation of material and form, Grosvenor often establishes relationships between strangers. Unsuspecting objects, unfamiliar textures, and unconventional colors are often the divergent components with which he constructs a scene. The three objects, sitting on wheels—a sort of built in pedestal—seem on the verge of turning into something else, as much as they seem like they could roll away. 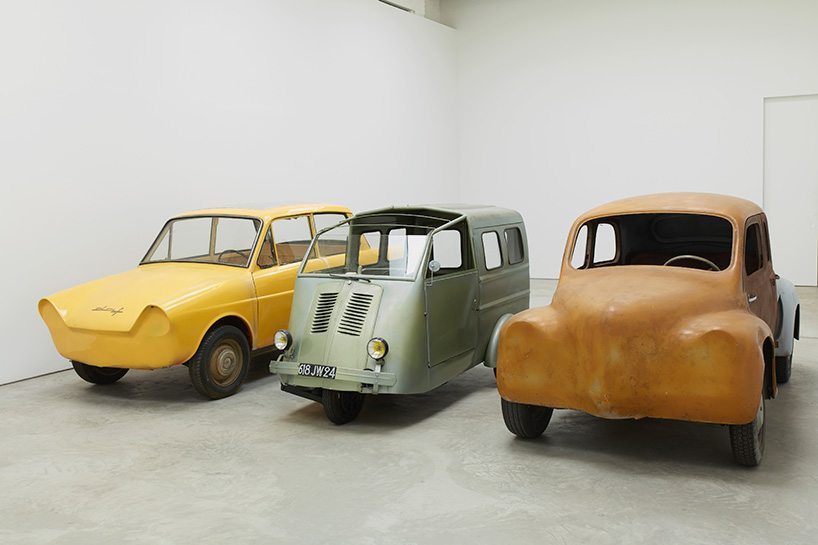 “We must not forget that an object is the best messenger of a world above that of nature: one can easily see in an object at once a perfection and an absence of origin, a closure and brilliance, a transformation of life into matter.”

You can see the untitled sculpture at Karma Gallery in New York on show until August 13th karmakarma.org