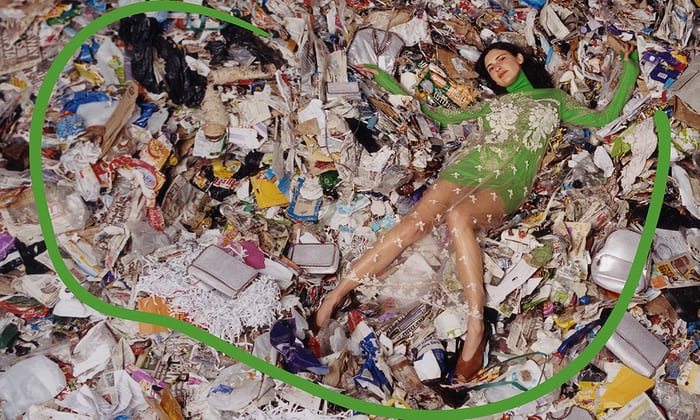 Stella McCartney’s winter 2017 collection was modelled against the backdrop of a landfill site. Photograph: Harley Weir and Urs Fischer for Stella McCartney

This article titled “Fashion must fight the scourge of dumped clothing clogging landfills” was written by Lucy Siegle, for The Observer on Saturday 29th July 2017 23.05 UTC

Facebook users will be familiar with the On This Day feature. From time to time it greets you with a blast from your relatively recent past. Some find it unnerving, especially if it’s a picture with an ex, for example. But my eye is always drawn to the clothes. Whatever happened to that handbag? Do you still wear those jeans?

If it’s an image from more than three years ago, then the answer is probably “no”. According to a recent report from Wrap (the Waste and Resources Action Programme), the average piece of clothing in the UK lasts for 3.3 years before being discarded. Other research puts the lifespan of UK garments at 2.2 years. For a younger demographic, you can probably halve that. A UK-based fashion company tells its buyers to remember that a dress will stay in the owner’s wardrobe for only five weeks.

The way we get dressed now has virtually nothing in common with the behaviour of previous generations, for whom one garment could be worn for decades. Wrap estimates that we purchased 1.13m tonnes of new clothing last year in the UK. While an estimated £30bn-worth hangs about gathering dust – Tinie Tempah’s refrain “I have so many clothes, I keep some at my aunt’s house” was spot on – an unpalatable quantity goes in the bin. A survey commissioned by Sainsbury’s last spring found that 235m items ended up on landfill sites as people readied their wardrobes for summer. Surely we can do better than this?

Vivienne Westwood – never one to miss an opportunity to call her legion of fans to action – thinks we can. “It’s about quality, not quantity – not landfill,” she said recently at one of her own shows. Hot on her heels, Vetements, very much the “it” brand of our times, made its own statement last week. The label filled the windows of Saks Fifth Avenue in New York – one of the commercial hotspots of global fashion retail – not with its latest collection, but with waste garments en route to a recycling charity.

But it was Stella McCartney who really upped the ante, electing to shoot her latest collection on a Scottish landfill site. Models lay across the rusted husks of old cars and languished on top of household waste. From a sustainability perspective, Stella McCartney is the luxury Kering group’s top-performing brand. Much of this success is based on McCartney’s own personal resolve. It’s clear that the landfill backdrop is not just an interesting aesthetic to her.

Now there’s an obvious contradiction between selling fashion and instructing us to buy less, but what these designers are calling for is some sanity in an industry now rated as the fifth-most polluting on the planet.

The fashion industry has developed a pretty terrible reputation – not least for exploitation of human capital, outsourcing production to the world’s lowest-wage economies. Four years ago, 1,133 garment workers were killed in Dhaka, Bangladesh, while producing clothing for high-street brands and their subsidiaries. After that, many worried what was next.

For those in and around the industry, garment waste has long been rumoured to be the next big scandal. Globally, levels of production and consumption are forecast to increase as fashion waste becomes an environmental crisis to rival plastic pollution in oceans. This is a tale of over-production and supply, powered by the relentless “fast fashion” system of production that over the past three decades has revolutionised both the way we dress and the way clothing is produced – and not often for the better.

Much of the waste in the fashion industry is hidden along a chaotic supply chain and doesn’t make it into the environmental accounting that underpins a Wrap report. Perhaps the worst of it comes in the form of readymade garments, assembled and sewn but discarded because of an order mistake or an issue with the colour. According to industry insiders, this waste represents 3-5% of every factory’s inventory (and a large factory in Dhaka can produce 240m pieces a year).

There is no verified figure for the amount of clothing produced globally each year (predominantly in low-wage textile hotspots like Dhaka without waste management systems) but my own research puts it between 80bn and 100bn garments. That means a lot of hidden fashion waste.

Where it becomes highly visible is on the outskirts of big production areas, such as the garment districts of Dhaka. This is where the production waste leaves the factories and is absorbed by the air and earth in the local community. Waste from the cutting room (called jhut) often ends up in so-called go-downs. These makeshift sorting operations are the stuff of legend in Dhaka, with fires a regular occurrence. But what happens to all the rest?

“You don’t even want to know,” says Estonian designer and clothing waste researcher Reet Aus, who spends a lot of time following unwanted garments out of factory gates. “You see it by the side of the road being sold, or just dumped, but a lot is burned,” she says. “I know a brick factory near the garment district where the main fuel is garment waste. You can’t really see anything around there, the pollution is terrible. Remember that thanks to the chemicals and finishing agents, used textile waste is basically toxic waste.”

Meanwhile, the urge to buy grows stronger as clothes shopping takes on a quasi-addictive quality. And let’s be honest here, are the fast-fashion corporations with their extraordinary profits likely to do anything about consumption, the driver of waste and the driver of the industry’s impact? Their business model, after all, depends on it.

Increasingly these brands are signposting a way of allowing us to have our cake and eat it. They are buying into recycling schemes and investing in competitions to close the loop on textile fibres. The idea is that if they can collect waste garments and regenerate fibres to be used in new garments, the impact of fast fashion can be negated.

The trouble is, it’s hard to buy into. I have been critical of brands overclaiming in this area before, particularly when I looked at the numbers around H&M’s recycling week in 2016. In truth, there are quite a few technical barriers to closing the fashion loop – that is, regenerating fibre from an old, unloved outfit, spinning and making it into something else, all within a timeframe and quality that’s interesting to the consumer.

“Every fabric is different,” says Aus, “so one garment might contain a blend of different fabrics. On top of that, you have to strip out the zippers and buttons inherent in post-consumer fashion waste.” So while a consumer may believe that a loved jumper or sundress is going to be magically regenerated into a new item, in practice your old T-shirt is probably going into a well-worn recycling network.

She and her team have developed software to keep track of potential garment waste data during production, which she is trialling with a large manufacturer: Beximco in Bangladesh. By getting information about the volume and material of leftover textiles, she can design that material back into a product before it becomes waste. “I’d rather not produce waste in the first place,” she reasons. “Plus, this is a better system for large brands who find recycling and regeneration difficult. That is easier for smaller, more agile companies.” This means some of fashion’s big lessons about its waste may come from unlikely parts of the apparel world. For once, the smaller companies have a chance to steal.

Tom Kay, the founder of Cornish outdoor brand Finisterre, is addressing a waste problem highly relevant to his customer and doesn’t care that it might seem niche to the rest of us. “The average neoprene wetsuit only lasts two years,” he says. “We’ve redesigned with wider seam tape and better stitching but it still only lasts probably for three. It would be disastrous for these things to be dumped, but there’s nowhere for them to go. That’s why you see them piled up in people’s garages.”

Last week, he launched an intriguing job advert in partnership with Exeter University: a £26,000-a-year position, paid by Finisterre, to be filled by a materials scientist who shares his dream of making wetsuits from wetsuits. “We don’t know how it will go, but I’m excited,” he said.

? Fashion in the UK lasts an average of 3.3 years before a garment is discarded.

? Extending the life of a garment by an extra nine months reduces its environmental impact by 20-30%.

? Providing one tonne of clothing for direct re-use by giving it to a charity shop or selling it online can result in a net greenhouse gas saving of 11 tonnes of carbon dioxide equivalent.