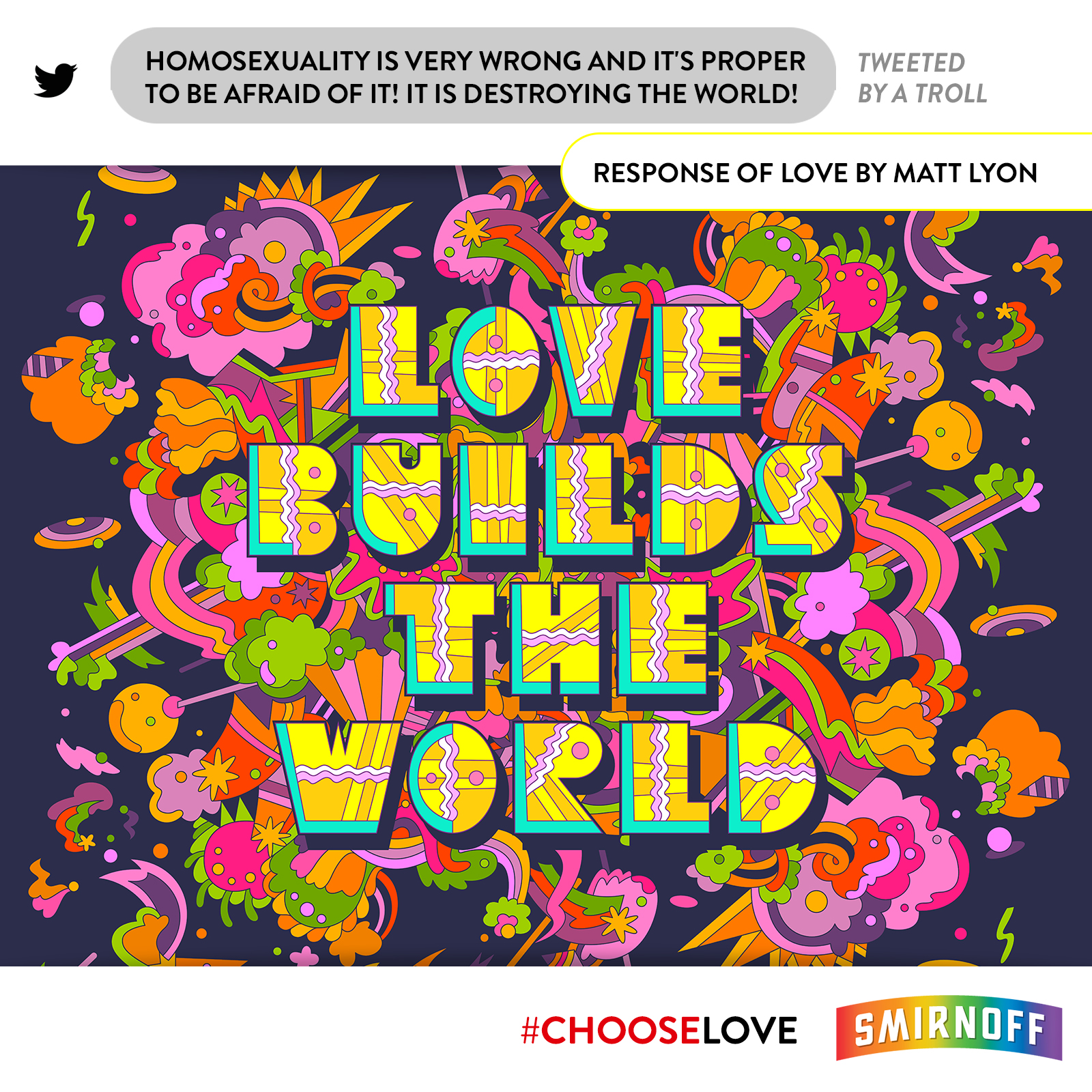 2017 marks 50 years since the partial decriminalisation of sex between men, and although great strides have been made with legal equality, prejudiced attitudes towards the LGBT+ community sadly still exist. A report by Galop , a LGBT+ anti-violence charity, revealed that 1 in 3 members of the LGBT+ community (31%) have experienced online abuse targeting their sexual orientation or gender identity. In the last year, Galop has seen the level of online abuse being posted on social media increase. During this historic summer, Smirnoff is raising awareness of the need to stand up to online prejudice with the launch of its thought provoking #chooselove campaign, which will run during PRIDE season in the UK.

Throughout 2017 PRIDE, Smirnoff will monitor online social media to identify members of the LGBT+ community that have received abuse based upon their sexual orientation or gender identity. A taskforce of dynamic and socially engaged illustrators will then respond to these messages of hate with artwork of love. By taking the offensive tweets out of the hidden, personal, digital environment and reacting in a thought provoking and positive way, the Smirnoff #chooselove campaign will spread love and bring the issue to the public’s attention.

Pride in London’s theme for the 2017 campaign is ‘Love Happens Here’. It celebrates love in all its forms as a reminder that the battle for true equality for the LGBT+ community is far from over, and that rights hard won can be threatened and taken away.

“We are pleased that Smirnoff is taking the issue of LGBT+ hate directed towards the community via social media so seriously, it is something that Pride in London is also extremely concerned about. Our ‘Love Happens Here’ campaign is all about taking a stand against hate in all its forms, and sadly social media is an environment where it is all too easy for prejudiced views to be openly expressed. This summer, we will be conquering the hate with messages of love from London, and it’s great to have brands like Smirnoff join us.”

The illustrators involved in #chooselove are: 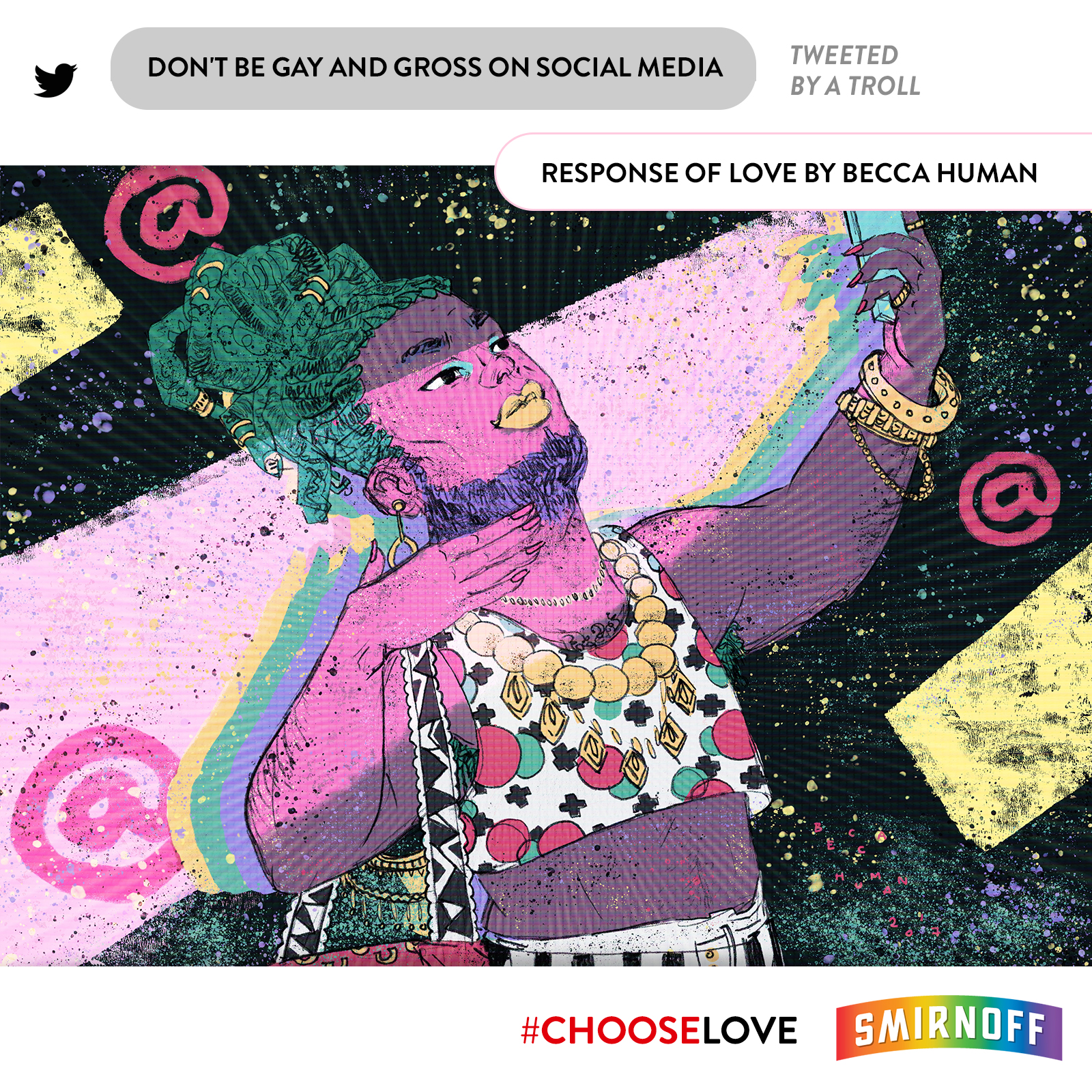 Becca Human – @becca.human
Becca Human is a London based illustrator and film director based in London. Following graduation from Central Saint Martins, Becca has become known for her narrative storytelling and use of vivid colours. She has recently been seen creating work for young social collectives, such as Resis’Dance and BBZ, a creative music and event production duo that challenges obsolete ideas around identity, gender and race.

Matt Lyon – @c8six
Matt Lyon is a digital and mixed-media artist, non-stop doodler and creator of visual treats. Known for his previous work with PRIDE and personal projects connected to the LGBT+ community, Matt’s work has been widely published in books and magazines, has been exhibited in Europe, the USA and the Far East.

Marylou Faure – @maryloufaure
Working as a Freelance Illustrator and Art Director, Marylou’s work is filled with quirky characters, curvy shapes and vibrant colours. She represents everyday life, people and situations in a fun and sometimes provocative manner, to make people smile and think. 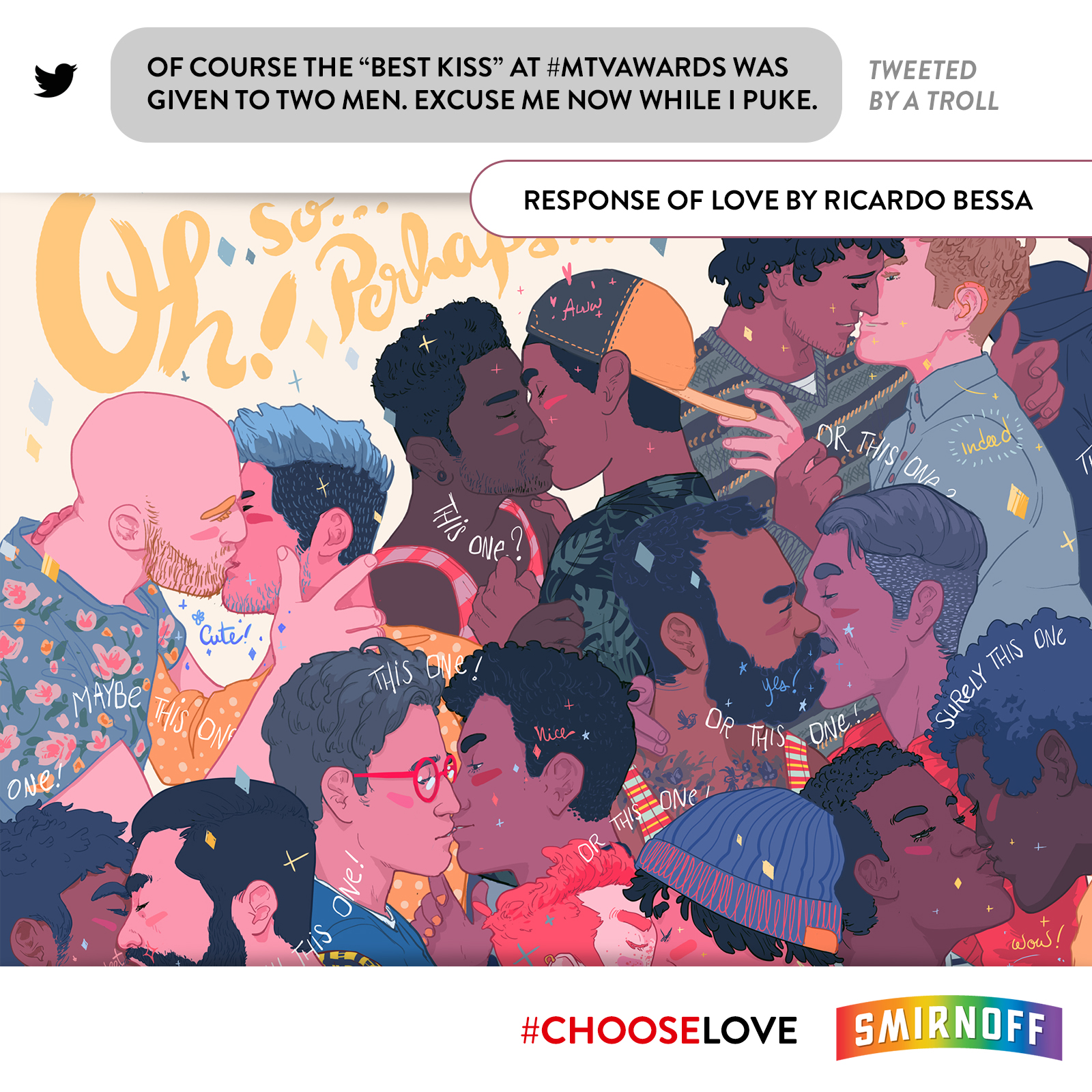 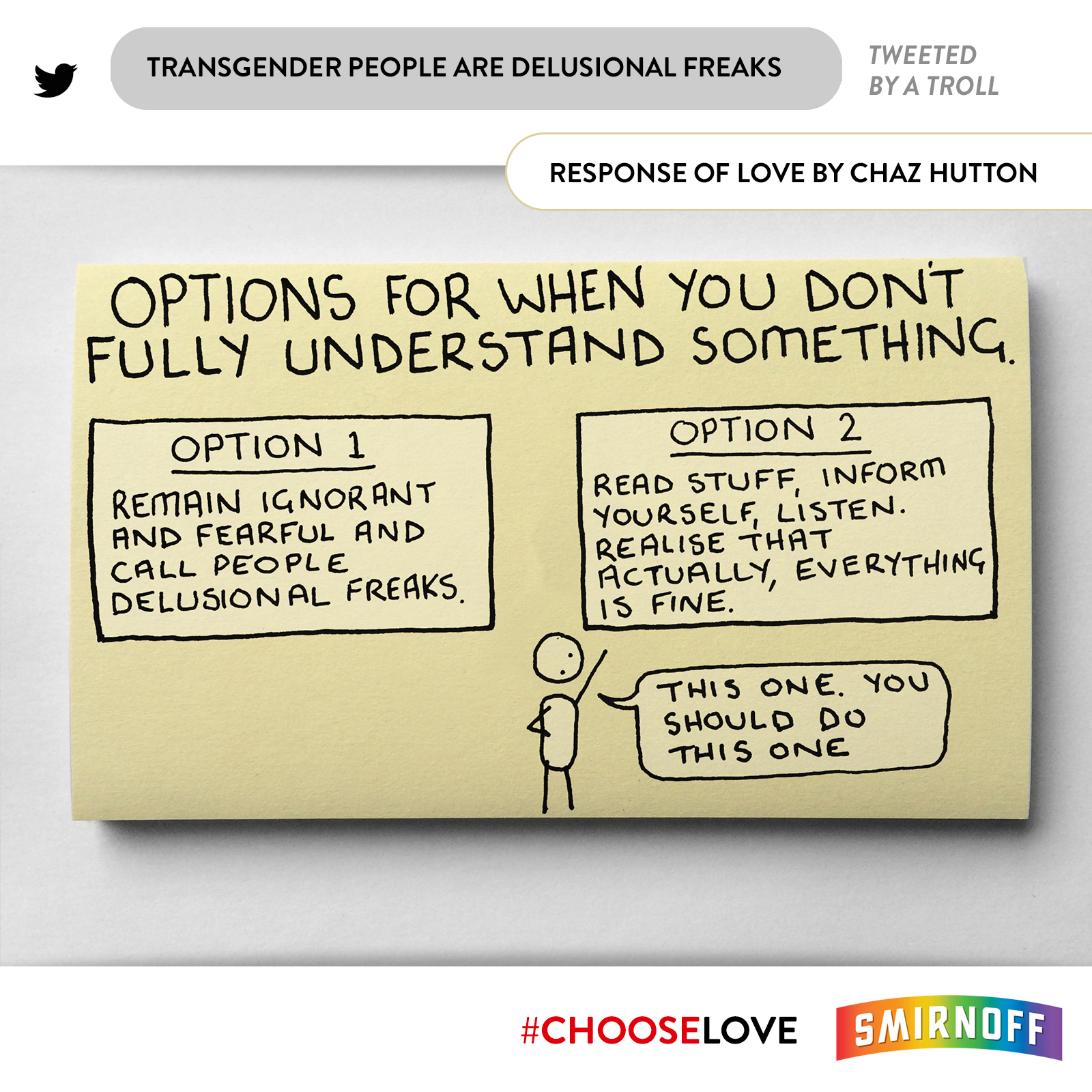 Charles Hutton – @instachaaz
Better known as @instachaaz, Charles is an unconventional artist who has an uncanny ability to tap into life’s comedic idiosyncrasies through an everyday medium – the Post-It note. Charles’ quirky drawings perfectly capture the struggles of the modern person. Exploring a diverse range of themes, from dating and laziness to rent payments and the perils of a quick-draining mobile phone battery.

Lucas Levitan – @lucaslevitan
Lucas is a Brazilian multimedia artist living in between London and Madrid. He searches for inspiration in everyday life and turns ordinary objects and scenes into intriguing images. He sees the world with a little twist on reality. And by de-contextualising them, he changes the way they are perceived and engage the audience in a unexpected and playful way.

Anyone effected by anti-LGBT+ posts on social media should report the abuse to www.gov.uk/report-hate-crime and speak to Galop www.galop.org.uk for further support.