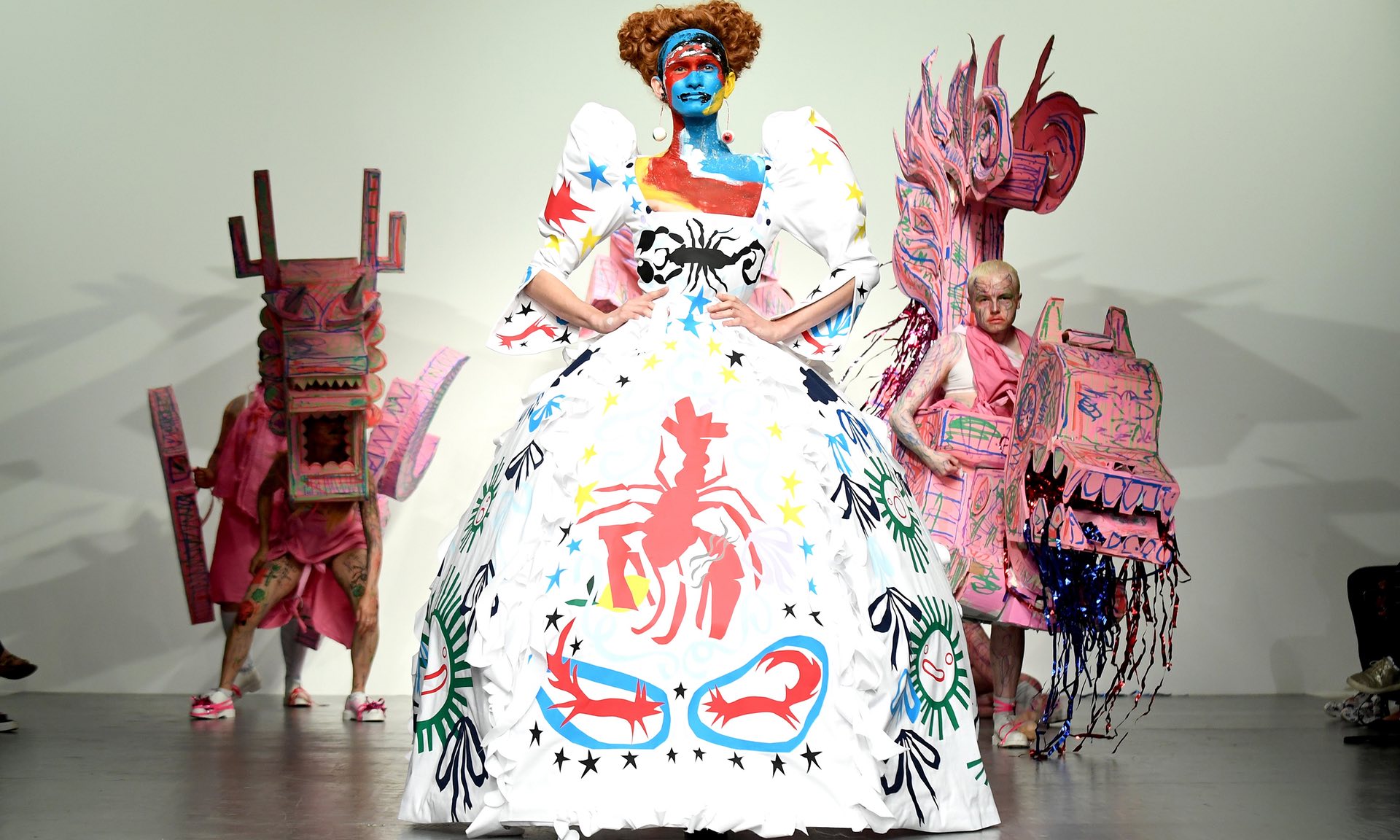 This article titled “‘The past is another country we can all visit’ – that’s Charles Jeffrey’s motto” was written by Lauren Cochrane, for The Observer on Saturday 10th June 2017 23.01 UTC

The Charles Jeffrey Loverboy show has become a must-see at men’s London Fashion Week – and Saturday afternoon was no different. Jeffrey is the leader for a new generation bringing high-end fashion and club-culture, anything-goes creativity together again. As the show notes described it, “a euphoric unity of debauchery takes centre stage” for this collection. “It’s … dancing in the face of threats to freedom … It’s not enough to stay woke – we need to be alive.”

Jeffrey has made ripples in fashion ever since graduating with an MA at Central Saint Martins in 2015. Originally from Glasgow, he won graduate of the year at the Scottish fashion awards. Lulu Kennedy, founder of the influential new talent initiative Fashion East, says he shone from the start. “He stood out a mile for ideas and execution,” she recalls. “Every look’s consideration from the silhouette, materials and effortless styling was on point.” He went on to show with Fashion East for three seasons.

Saturday’s show was certainly true to its billing. Life-affirming and inclusive – the most-used adjective by the fashion editors was “jolly”. Witty, creative and clever would also apply. It began with dancers dressed in pink wraps, their bodies covered with multicoloured scribbles. Models then emerged, wearing bright colours, dresses with primary-coloured scribbles and tartan suiting and a yellow floor-length leather mac. Others wore T-shirts with plays on newspaper headlines, including one that read “Children high on drink and drugs”. Notable looks included twins in 3D glasses and short knitted tops and a bustled dress with children’s drawings all over it. It ended with more dancers, a glitter bomb and Jeffrey dancing down the catwalk in short shorts to rave music.

Backstage, a breathless Jeffrey said that he wanted to make the collection upbeat. He explained it in terms of music. “We wanted to turn the bass up, the treble up and the tempo up, to do extra, extra, extra.” Jeffrey said he was inspired by crossdressing through the ages. “The past is another country that everyone can visit,” he said. “That was our motto this season.”

He said the positivity was a reaction to the current political climate, including the election results. “We might as well make people smile today,” smiled Jeffrey.

He trained at Central Saint Martins, and was an intern at Christian Dior, but Jeffrey forged his creativity on the dance floor. Last year Another Magazine hailed him as the designer “reviving London’s subcultural style scene”. Moving down to London as a teenager, he quickly immersed himself in east London nightlife, starting his Loverboy club in 2014. For Jeffrey, Loverboy the club and Loverboy the label don’t just share a name – they inform each other. Speaking to the Guardian earlier this year, he said “being around people wanting to move and be happy inspires me”. On Facebook, the club is described as a place “to dance the hours away in a frenzy of hot jams, fabulous people, and drunken mistakes”.

He works with those found on this scene – choreographer and former club kid Theo Adams worked on the dance performance while Jeffrey met Jack Appleyard, his stylist and collaborator who shared his bow, on the street.

If he is prone to a visual spectacle, this isn’t about shock tactics. In the mode of Vivienne Westwood, who he has name-checked as an influence, Jeffrey combines an interest in new and sometimes outlier ideas with a talent for cutting that means he has the potential to become a serious player. The clothes here showed off his creativity as well as technical skill.

Jeffrey worked with the Savile Row tailors Chittleborough & Morgan. His clothes have caught the attention of Harry Styles and Faris Badwan, who have worn his designs, and Alexa Chung. She collaborated with Jeffrey on a print for her recently launched label. It’s suitably nonconformist: severed hands cover Chung’s cheongsam design.

While Loverboy the club seems to be on pause, the designer still DJs and has had gigs at Savage, the popular gay night in east London with a gender-fluid dress code. Male and female visitors dress up to the nines, and dance on a stage that is, on week nights, reserved for strippers.

Jonjo Jury, the resident, says Jeffrey has a reputation for being “something of a pied piper. I know when he’s in the club because I can hear his scream and there’s loads of fabulous people”. A typical Jeffrey set might include “a really heavy Iggy Pop guitar song with an R&B album track”. He might be wearing a red wig, PVC shorts and dark eyebrows. The permissive scene that Jeffrey is part of no doubt feeds into what is seen on the catwalk. Jury believes that Jeffrey – who is now 26 – has revived the fashion and nightlife connection that flourished in the 1980s, when designers like John Galliano were regulars on the dance floor, and in the mid-noughties at Boombox and Ponystep, a club that Jeffrey saw in its last hurrah. Jeffrey’s Instagram feed is peppered with images of 1980s club regulars – including jewellery designer Andrew Logan and DJ Princess Julia, and these figures are regulars in his front row. “Charles is quite unique,” says Jury. “He’s talented fashion-wise and he lives for music and dancing.” The combination – as seen on Saturday – is something to behold.

The other story occupying the men’s fashion press was an unlikely collaboration between Burberry and the Russian designer Gosha Rubchinskiy. Rubchinskiy’s show in St Petersburg on Friday night included several looks that featured Burberry’s famous checks. There were trench coats, a Harrington-style jacket and shirt and shorts in checks worn together. The British luxury brand has traditionally distanced itself from the popularity it has among working-class young men who typically spend their Saturday afternoons at football. For Rubchinskiy, that is arguably the appeal. His aesthetic is centred on youth culture. The last collection was a collaboration with Adidas heralding the World Cup in Russia next year.

This collection built on his reputation for taking fashion to the terraces. Burberry may now be coming round to the idea too. Creative director Christopher Bailey said that Rubchinskiy’s “reinterpretation of some of our most iconic designs feels exciting, new and relevant while paying enormous respect to their British cultural heritage”.

Why the Middle-Aged Man Has Never Been More Fashionable

Image by Free-Photos from Pixabay When we talk about men’s fashion trends we can very easily go for the young, […] 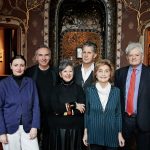 MEMOS: Talking of fashion in this millennium is an exhibition produced by Camera Nazionale della Moda Italiana in collaboration with Museo Poldi Pezzoli and, with the support from the Italian Ministry of Foreign Affairs and International Cooperation and the Italian Trade Agency. 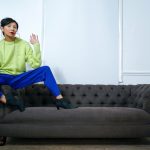 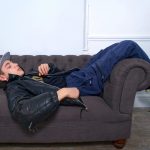