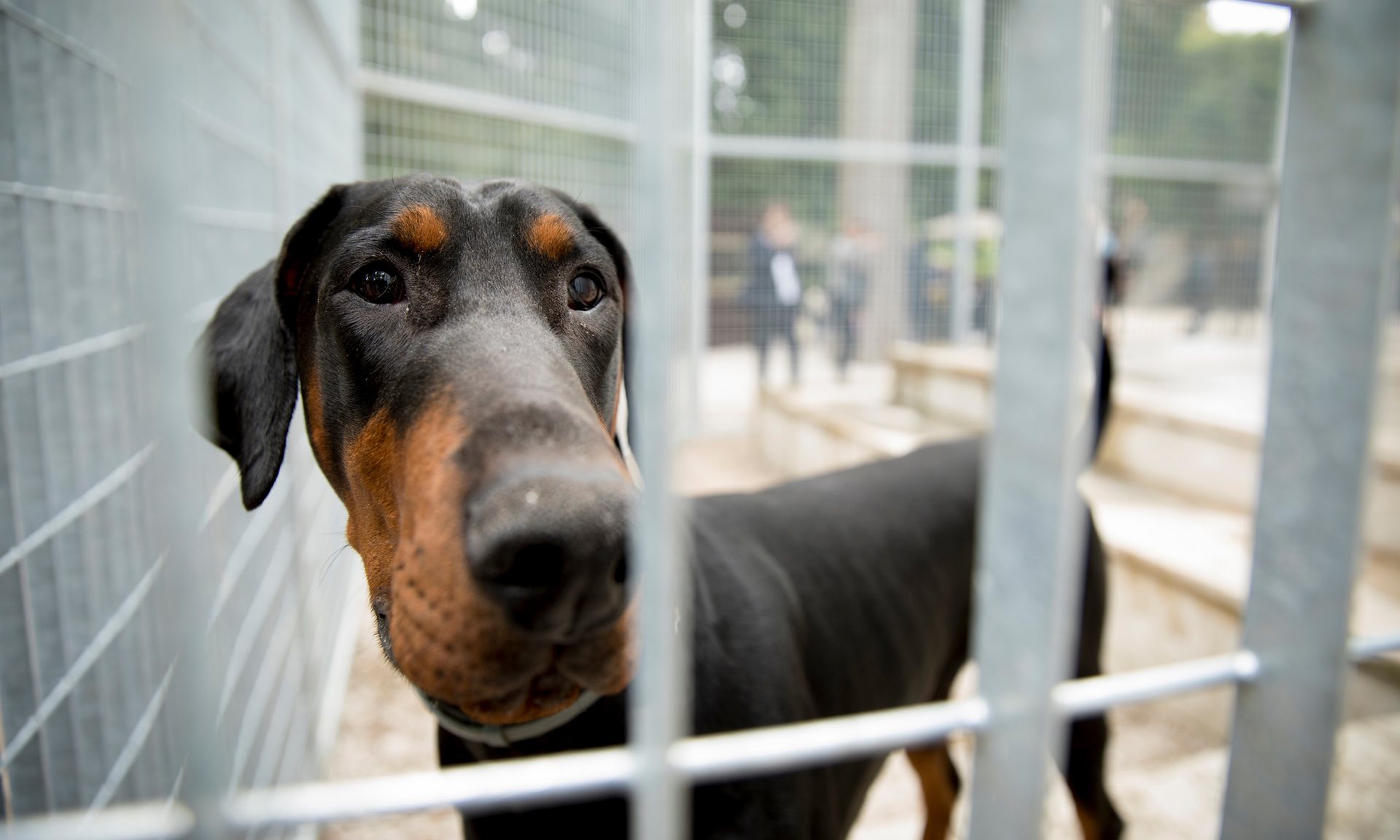 Alert to our presence … a doberman pinscher at the German pavilion. Photograph: David Levene for the Guardian

This article titled “Venice Biennale: slaps, drenchings and Dobermans on the prowl” was written by Adrian Searle, for The Guardian on Monday 15th May 2017 18.06 UTC

An upbeat shout-out for the enduring power and vitality of art, Viva Arte Viva provides the title of both the 57th Venice Biennale and its main exhibition. Filling the central pavilion in the Giardini, and running the length of the Arsenale in the medieval dockyard, Viva Arte Viva begins with photographs of Austrian sculptor Franz West, having a nice lie down in 1973, and Zagreb conceptualist Mladen Stilinovi taking a nap in 1978. Meanwhile, tousled hair peeks from under a blanket in a real bed, in a 1996 mock-up of a bedroom by Yelena Voroyeva and Viktor Vorobyev.

Curated by Christine Macel of the Pompidou centre, Viva Arte Viva begins in casual, insouciant style, but soon drifts off into a solipsistic trance of its own creation. Has Macel also been sleeping? It is now 2017. History is a nightmare and what would any of us do for a good night’s kip? All the doubts and quibbles I have had over previous biennales are nothing compared with the qualms I feel wandering the nine sections of Macel’s exhibition, including a Pavilion of Joys and Fears, a Pavilion of the Shamans, a Pavilion of the Dionysian (a celebration, we are told, of the female body and sexuality) and a Pavilion of Colours. The rubrics themselves feel as dated as much of the art.

I saw grown adults recoiling, not so much at the work, but at the wall panels. One explains that, in a world shaken by conflicts, wars and increasing inequality, we need to “reconsider the human being … capable of building a new, free and fraternal world”. Where is this world exactly and when will it appear? What about the here and now? Bringing many lesser-known artists to the biennale – 103 out of the show’s 120 artists have never exhibited here before – Macel nevertheless appears almost wholly out of touch with the moment. Perhaps she is trying to provide a balm.

Related: Bright lights on the lagoon: Venice Biennale 2017 – in pictures

As he works at his desk, Edi Rama, the artist who became Albania’s prime minister, makes convoluted doodles in unconscious response to the problems of state. Turned into a kind of monstrous wallpaper, these organic diagrams proliferate over a huge wall in the central pavilion. You wonder what each writhing cluster means. Rama’s wall decorates a workshop set up by Olafur Eliasson, where refugees, migrants, asylum-seekers and students toil away, manufacturing small, skeletal polyhedrons and fitting them with flex and little green lights. Visitors can buy the lamps for €250 a pop. If you buy several, you can begin fitting them all together into something resembling an Eliasson sculpture.

Later, we come to a kind of supermarket whose shelves are filled with Hassan Sharif’s accumulation of years of sculptures. Here’s a flattened teapot, there hundreds of little bits of coloured plastic and dozens of cardboard boxes. The UAE artist died last year and his installation has been transferred to Venice from his studio. These accumulations of intricately ordered and bound together detritus have, paradoxically, a lively air, not of collected rubbish but of thinking – one thing leading to another, then another.

Of course, there are some good things in Viva Arte Viva, but also a lot of mediocrity and irrelevance, the usual iterations of the artist-as-tormented-visionary, weedy sops to environmental concerns, woolly thinking and things made from wool. It gets worse as we trudge through the Arsenale. Instead of telling contrasts, dissonance and confrontation, Macel’s exhibition veers between the sanctimonious and kitsch, weak art and weaker ideas.

In a world “where the need for care and spirituality is greater than ever”, Macel gives us the shaman and Ernesto Neto’s big tent, in which Amazonian Huni Kuin people perform songs and ritual rites. Later, we are treated to a video installation of coloured balloons floating on water, rooms of feeble geometric abstractions, films of happy-clappy togetherness in the mountains, and an installation of giant balls of coloured wool. These are meant to provide some sort of solace, but don’t.

The challenge, if this art is challenging in any way, is to stay awake. Where are the insights into the grave situation humanity is in? The refugee crisis, statelessness and exile, the real political and ecological crises facing us, are reduced to nostalgic handwringing, nods of hippyish concern and pairs of trainers used as flowerpots. Macel has given us an enervating biennale. I want to see things anew, see new things, and encounter them differently, not be told things I already know too well. I want to be confronted and surprised, challenged even.

I’m getting this long hard stare from a lean youth of indeterminate gender in the German pavilion, so I give one back. Eye contact is just one of the elements of Faust, a “five-hour production and a seven-month scenario” by Anne Imhof. I kept going back to the pavilion in the Giardini, day after day. I saw someone slapping someone else, someone getting hosed down, and sung laments rising from below the elevated glass floor in the pavilion, where Imhof’s collaborators squirm and clasp one another, sing, and light little fires.

All this happens under our feet. Sometimes they appear among us, or up on glass ledges built above our heads. Lassitude and abjection swerve into menace and dangerous games. The audience plays their own game, caught between voyeuristic desire, bafflement and rejection.

Imhof’s collaborators arrange themselves as though for a fashion shoot, then drift away. Doberman pinschers lounge and pad about behind glass walls outside the pavilion. They are being rather than performing, but alert to our presence. Someone’s on the roof, sitting on the parapet, swinging one leg, nonchalantly smoking and looking down. I think I saw derision in that look. Compelling and addictive, Imhof’s Faust won the Golden Lion for best pavilion.

In Rachel Maclean’s Spite Your Face, the official Scottish representation in Venice, we follow the picaresque adventures of a post-truth Pinocchio in a corrupt world. Maclean plays all the parts herself, in a high-production mix of live action and animation, and mouthing the voices of actors. This is clever, but deeply irritating.

Riskier by far is a film by Wales’s James Richards. The centrepiece of his complex show is a frightening video, What Weakens the Flesh Is the Flesh Itself, made with collaborator Steve Reinke. The medical footage, crawling ants and dancing skeletons, lost young men forced to masturbate in a cellar until the end of time, are but a prelude to a section of the film devoted to the photographic archive of Albrecht Becker, a gay man imprisoned by the Nazis. Becker’s self-portraits show us alarming exercises in body modification, along with piercings and tattoos. This was a man taking back control of his body.

Geoffrey Farmer has destroyed the Canadian pavilion. A geyser erupts noisily through the demolished roof. The floor is a lumberyard of weeping timbers. I was drenched and so was the grandfather clock and the sculpture of Rodin’s thinker, redone as a praying mantis in the style of French existentialist sculptor Germaine Richier. This is just the beginning of a work that involves Allen Ginsberg, Farmer’s grandfather, New York’s Washington Square, the Napoleonic wars, a Swiss water trough, and much besides. I’m soaked. I’m drowning. It’s great.

I like the fact that Mark Bradford has littered the ground outside the US pavilion, making it look unloved, just like his country these days. You have to sidle round a huge hanging object – part unstretched painting, part gigantic obstacle – on your way in. A Medusa of curdled paint and garbage-sack plastic stands in one room, writhing broodily. The pavilion’s usual entrance has been redone as some sort of gorgon’s lair. In a video in the final room, we see a black kid on the street, full of confidence, filmed from behind and walking away from us. Bradford made the video in 2005. Twelve years on, where is that boy now? Does this black life matter?

Facing the camera, actors Alec Baldwin and Julianne Moore retell the testimonies of individuals forced to flee their countries. The stories of desperate exiles slide back and forth, including a gay Venezuelan professor, a former child soldier and an Indian transgender activist. On monitors, we can watch the full length, faltering narratives of these exiles themselves. The best work I have ever seen by Candice Breitz, Love Story is subtle, tragic and mesmerising, not only in its shuttling glide between different people and their histories, but also between the direct and the translation, between evidence and interpretation, fame and anonymity.

Jordi Colomer has filled the first room of the Spanish pavilion with models of the tourist housing complexes that infest the Mediterranean coast. Beyond, videos are set up above bleachers, as though for a sports event. The works record various collective street actions and fiesta-like celebrations devised by the artist. Three women – actor Laura Weissmahr, writer and performance artist Lydia Lunch and dancer Anita Deb – move through housing estates, take road trips and donkey rides through liminal zones between the city and the coast, picking up participants and followers as they go. Both joyful and sardonic, Colomer’s ¡Únete! Join Us! is an invitation and a demand, a gloriously daft celebration and a protest, and a good rejoinder to Macel’s exhibition.

A stone’s throw from the Spanish pavilion, battleship-sized luxury yachts lined the quay outside the Giardini during opening week, the collectors who own them immune to collective action. It is difficult not to become cynical about the power of art, and the power of money. Perhaps something of this revulsion to the steady commercialisation of contemporary art and of the biennale itself led Macel to retreat into shamanism and the joy of colour. But so much of what she offers us feels secondary, a bloodless paean to artistic individuality. In Colomer’s show, in Imhof’s Faust and in Breitz’s Love Story, you feel a recognition of the fraught complexities of being alive. Somehow, we are all in it together. Viva Arte, indeed.