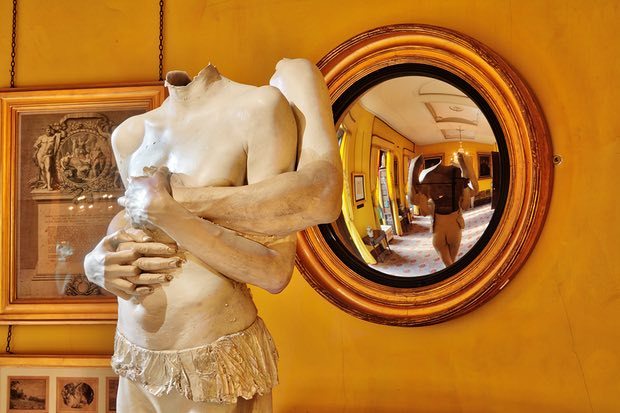 Marc Quinn is in love, and lustily so. That is the main news at Sir John Soane’s Museum. If you didn’t know it from the flood of celebrity photographs of the 53-year-old artist in superannuated baseball cap embracing his girlfriend, the towering dancer Jenny Bastet, you could easily deduce it from this show of new sculptures specially made for the Soane. Every single one testifies to his adoration of her lithe body, nude and forming the central, full-frontal figure in a sequence of pas de deux in which his arms hold her tightly. Who knows where one lover ends and the other begins?

That’s certainly the first trick with these figures, cast from life but painted to look like classical sculptures in marble and bronze: you’re supposed to disentangle the bodies. Each stands upon two long legs, which might be male or female at first sight. Each has two sets of arms and shoulders, but neither heads nor feet. The immediate associations are with Greek warriors, Roman athletes and neo-classical lovers, twined in white marble embrace. Indeed, Quinn has been directly inspired by the fragments of ancient civilisations acquired by the Georgian architect John Soane, mounted floor to ceiling in the museum around you.

Compelled to investigate, you draw in close – whereupon the ruthless accuracy of each body cast strikes home. The skin’s grain, the pores and veins, the slight irregularities and blemishes all reveal themselves with an abrupt realism that runs counter to the smooth classical aesthetic, not to mention the pleasing paint. For each work is a different colour, running from the white of marble to slate-blue, taupe and the darkness of ancient bronze. They look perfectly at home at the Soane; there is even a fetching Georgian grey. Tremendously tasteful but fundamentally flawed: that’s the second trick – an intriguing tension between the ideal and the human.

Well it’s an idea, all right, and concepts have been Quinn’s career ever since 1991, when he cast five litres of his own blood in the frozen head Self (a life’s blood to make a portrait from life) and sold it to Charles Saatchi in the YBA heyday. And remodelling classicism has been his long-term modus operandi, what’s more. Think of the giant sculpture of Alison Lapper, pregnant and disabled, portrayed in white marble in Trafalgar Square in 2005. Or Kate Moss as a solid-gold goddess, reputedly costing £1.5m to make. Think of Quinn’s pregnant man, heroic in Carrara marble and rising tall as Michelangelo’s David.

Now it is true that his latest series gets some purchase from the special commission, for the Soane is practically a museum of sculpture. One of Quinn’s works is positioned immediately between two classical nudes in the crypt, drawing sharp contrasts between modelling from the imagination and casting from the life. Another, headless, is surrounded by gargoyles, broken effigies and decapitated stone heads, prompting thoughts on the synecdochic power of fragments.

And for a while at least, Quinn’s figures hold their own. He almost gets away with the classical fakery, especially when his specially aged surfaces blend in with the water-stained marble around them, or when light pours through a pair of fragile fibreglass hands, turning them into funereal wings. But warring against this are unfortunate technical glitches – where the hands are fudged, where a fringe of cast fabric looks like a secondary school project, where the dancer’s vulva appears incised as if with a child’s craft-knife in plasticine.

Here and there the artifice is deliberately exposed, to be sure. Most of these sculptures are backless: walk round them and their hollowness is revealed. And one gallery is devoted to the process, including photographs of Quinn and Bastet up to their necks in the pink dental rubber from which the moulds were made, the rubber skins then peeled off like old overcoats.

But these skins are presented here too like sacred relics in glass vitrines. Quinn, always so intelligent, if curiously drawn to the brash, appears to be losing his rueful sense of humour.

Losing it to amour fou, perhaps. For the dozen works at the Soane Museum are all about Quinn’s passion for Bastet’s naked body. It is not just that she has no face, nor that he plays with the androgyny of her form – the broad shoulders, long arms and athletic legs – nor even nor that his hands are all over his muse. If classicism is all about the pure and depilated nude, genitals euphemised to the point of invisibility, Quinn’s figures are openly, candidly sexual. So are his swooning subtitles: Heaven, Lovely, Hot.

It is a long time since Marc Quinn cast anything subtle. The recent The Sound of Silence – an aeroplane crash in the form of a mobile – was crass. His enormous sea shells, cast in polished bronze, are cumbersome and costly. His naked, bronze hermaphrodites make the Lapper statue look refined. Conceptualists are often drawn to casting as it allows them to invoke the history of figurative sculpture for their own purposes with maximum convenience (think of Ron Mueck, Gavin Turk, the magniloquent Antony Gormley, multiplying himself all over the land). Quinn used to be both original and eloquent with his body casts, especially the early self-portraits, in which he appeared flayed, turned inside out or collapsed on the floor like dropped trousers; crushed, melting, frozen – essentially metaphysical.

But here he has repeated a single idea to no obvious gain (except presumably financial) in a sequence of works that will lose a lot when removed from their elevated surroundings, looking as they do, in the end, like the sexual trophies of a middle-aged man.

This year’s Tate Britain Commission is by another White Cube artist, the Welshman Cerith Wyn Evans, and he too has recycled himself. Anyone who saw his last show will be familiar with some of the elements of the colossal white neon light piece, Forms in Space… by Light (in Time), hanging in the three neoclassical halls of the Duveen Galleries. At a distance, they cohere into something like an Ultra Brite cloud mass. Close up, the elements prove to be a fizzle of lines drawn in and through space.

It all starts beautifully with a glowing circle that pulls the eye in, like a keyhole, to the strange forms beyond. These resemble bicycle spokes, cartoon exclamations and the diagrams from an optician’s chart (which indeed they are: an homage to Marcel Duchamp’s Large Glass where they also appear). The final gallery is a vast confusion of neon scribbles and whorls, lozenges, arcs, vectors and loops. Stand below it and the dazzle is cold and bright, like a sparkler’s frisson, yet curiously without the marvellous after-images.

It is a feat of engineering (though the wiring is heavily conspicuous) and inevitably proposes some sort of theoretical origin that one might be able to identify in astronomy, for instance, or DNA. But the wall text tells us that Wyn Evans is transcribing the movements of Japanese Noh theatre. This fact hovers blankly in the air, adding no further dimension to the work. Whatever it means to the artist, the spectacular optical effect has already captured the public’s heart and turned the piece into an enormous photo opportunity.

• Marc Quinn: Drawn from Life is at Sir John Soane’s Museum, London until 23 September. Cerith Wyn Evans: Forms in Space… by Light (in Time) is at Tate Britain, London until 20 August