Skip Gallery | Na, I Don’t Want None Of That Again
This March sees the installation of a skip in Hoxton Square. Not so unusual one might think. But this is a skip with a difference. This skip forms the heart of a new series of conceptual art events in London. With themes of death and love, the series of installations will bring art to unexpected places. 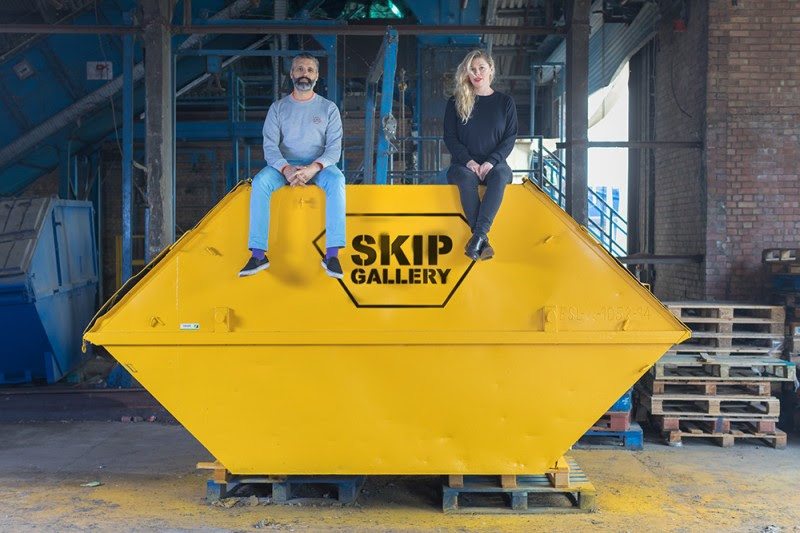 Skip Gallery concept is created by Catherine Borowski and Lee Baker, two London based artists and creatives whose idea was to take the mundane, the everyday and everyplace and to reimagine it as the creative, the arresting and the inspirational. Borowski and Baker have created the first Skip Gallery installation, Na, I Don’t Want None of That Again, and future skips will be created by the London Art Exchange and David Shrigley in 2017.

Skips are part of our everyday lives, providing the means with which we voraciously dismantle and renew our urban environment. They are so prevalent that we barely notice them. Yet they are imbued with the ideas of memory and discard. They represent that which we want to jettison, to forget about. There is a profound irony in the creation of artistic works, housed in a skip.

Skip Gallery is the space, the opportunity, the concept, inspiration and prompt. It offers an in, an of, an at. The themes of the project will embrace the urban environment and the reuse of materials. Skip is a new idea, a new type of arts space, offering an alternative to the conventional routes to art, for both artists and viewers.

Na, I Don’t Want None of That Again

Artist and creator Catherine Borowski was brought up in North London, a child of left wing, academic parents. After her father left home Borowski’s mother abruptly converted to Islam, and the artist’s work explores this dislocation and issue of identity. While undertaking the Islamic pilgrimage known as the Hajj to Mecca, Borowski’s mother, who had then taken the Islamic name Aliyah, died in unexplained circumstances. As the Saudi government bars all non-Muslims from visiting Mecca, Borowski is not able to visit her mother’s grave. All she has is a scrap of paper with handwritten co-ordinates on it, of the location of the grave.

This inaugural work, entitled Na, I Don’t Want None of That Again, is the first in the Skip Gallery series of 2017, is Catherine and Lee’s response to mothers, motherhood and to Catherine’s personal experience.

The installation uses the skip as a marker, casting a shadow over hundreds of spindles, marking both the shadow of Catherine’s mother’s death, and referencing unmarked graves. The spindles are no more than 19cm high, taking reference from the Islamic tradition of graves being no more than a hand’s height.

The spindles are shadowed by the skip itself, whilst/while within the skip, work by Lee Baker references the theme of maternal love, rebirth and serendipity. Lee’s mother, an Iranian Muslim, took on the mantle of grandmother to Catherine’s son upon hearing of Aliyah’s death.

The interior of the skip remains dark and dirty. Silver fabric on the floor moves independently from anything else – as if there’s someone underneath it (there is). The viewer will be equipped with headphones, to absorb and be moved by a soundscape which works with the moving fabric. The music will be an extracted version, an abstract pulse from two songs beloved by Catherine’s mother Aliyah.

The culmination of the event, of the launch evening (of every evening) is a firework display, proclaiming in explosive lights, a celebration of Aliyah’s life, a celebration of motherhood and a remembrance and cathartic moment for Catherine. The fireworks spell out Aliyah’s name.

This is a celebration, a memorial service, above all a cathartic moment for Catherine.