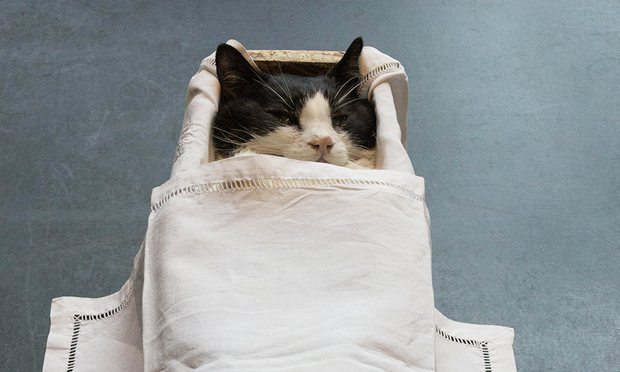 ‘Sorry about your cat. Can you get some veg?’ … Sophie Calle’s late cat Souris. Photograph: The artist and Galerie Perrotin

This article titled “‘The cat in the coffin almost steals the show’ … the Deutsche Börse photography prize” was written by Sean O’Hagan, for The Guardian on Wednesday 1st March 2017 18.50 UTC

Laid out in a tiny white coffin, his face peeking out from under what looks like an embroidered tablecloth, Souris the cat looks serene and slightly ridiculous – anthropomorphised by the human he has left behind, now his nine lives are exhausted.

There are several intriguing images in this year’s Deutsche Börse photography prize shortlist, but none more so than Sophie Calle’s portrait of her deceased pet. Above Souris, a framed text recounts his passing: “Florence stroked him. Anne put him to sleep. He died.” Then these words detail his funeral service: “Yves buried him. Serena planted daffodils around his grave.” The deadpan tone, typical of Calle, is heightened by the payoff, a phone message received from a friend: “Sophie, I am sorry about your cat. Could you ask Camille to pick up some vegetables, maybe leeks or turnips if she sees any? Kisses.”

Souris almost steals the show in the French artist’s small but perfectly formed exhibition, My Mother, My Father, My Cat, a meditation on mortality that walks a fine line between grief and deadpan humour, though, as is often the case with Calle, how deadpan or how humorous is open to question. Her mother, for instance, is represented by a photograph of a stuffed giraffe, her father by a ram’s head, both of which are, for her, emblematic. Elsewhere, the tone is more elegiac, with photographs housed in small wooden frames that recall holy icons.

Beneath a snapshot of her mother, young and alive, splashing in the waves of the sea, is an extract from the woman’s diary, dated 28 December 1985: “No use investing in the tenderness of my children, between Antoine’s placid indifference and Sophie’s selfish arrogance! My only consolation is, she is so morbid that she will come visit me in my grave more often than on Rue Boulard.” Calle’s work is confessional, but never straightforwardly so, as this quiet, playful exhibition attests.

Elsewhere in the Deutsche Börse show, at the Photographers’ Gallery in London, a mysterious landscape by Awoiska van der Molen exudes a very different atmosphere, the dark beauty and sublime stillness of her silver gelatin prints drawing you in with their quiet power. Best known for her 2014 series and book Sequester, which invigorated landscape photography with its nocturnal images, Van der Molen spends long periods of time alone in pursuit of photographs that seem to evoke the essence of place.

For this series, Blanco, she journeyed to Japan, Norway and Crete, though the images exist in and of themselves, without any reference to their actual location. These are landscape of the mind, dark places where the light falls like glistening water on leaves and the sea seems as substantial as the land. Only two of the images here are shot with long exposures at night, though they all feel nocturnal, not least the large-scale prints wherein leaves and branches give way to an enveloping unnerving darkness.

Her sense of scale is dynamic: in one image you can see two traffic signs on the road below a looming forest. They seem minuscule in comparison. In another image, black land gives way to grey sea, the horizon marked by a faint white line, the trace of a passing ship captured in a 20-minute exposure. Van der Molen’s landscapes are quietly mesmeric, an evocation of some hinterland beyond the purely physical.

Downstairs, another Dutch photographer, Dana Lixenberg, is showing portraits from her Imperial Courts series. It began back in 1992 when she went to photograph the residents of a housing project of the same name in the Watts neighbourhood of Los Angeles, just after the Rodney King riots. Twenty-five years on, her austere black and white images are testament to the power of understatement in documentary photography.

Lixenberg’s style is determinedly low-key, her portraits juxtaposed with everyday streetscapes and ordinary buildings. The young men and women who have posed for her camera seem both assertive and at ease. There is no trace here of the kind of campaigning photojournalism that foregrounds the poverty or criminality of ghetto life. Nevertheless, her subject is race. With Trump in the White House, Lixenberg’s series is the only one here that touches on the seething discontents of our time.

That said, Eurasia, by the Swiss duo Taiyo Onorato and Nico Krebs, is very much of our world and our time – but in a much more impressionistic way. Until now, I had only experienced their work in book form, most notably in The Great Unreal, their hallucinatory record of an American road trip. For Eurasia, they undertook an epic journey from Switzerland to Mongolia, recreated here using film and slide projections. The free-flowing stream of still and moving images requires a degree of surrender from the viewer, but it is repaid by the visual poetry that is a constant in their work.

In one sequence, which could have been taken from a Soviet era sci-fi film, an endless road leads through a city of towering white marble buildings in Turkmenistan. In another, they cut between moving images of men wrestling in Mongolia, fully clothed as traffic passes. In yet another, a huge crowd of men seem at first to be engaged in a bout of mass mourning, but it turns out to be an epic all-comers’ rugby match staged every Easter Sunday in a town in Georgia.

After a while, the flow of images attains its own almost hypnotic logic, as the real and the staged merge into one. Individual faces are caught in closeup, each lost in reverie. A female gymnast performs a strangely sexual routine. Buildings, people, artefacts and landscapes come and go as if in a dream. Eurasia uses the analogue media of the past – 16mm film, large-format plate cameras – and the conceptual strategies of the present to create a hybrid narrative that’s part fiction, part memory and part documentary. It could just steal the prize.

• The Deutsche Börse Photography Foundation prize is at The Photographers’ Gallery, London, 3 March to 11 June.