Revolution: Russian Art 1917-1932 review – when anything was possible - FAD Magazine
Skip to content 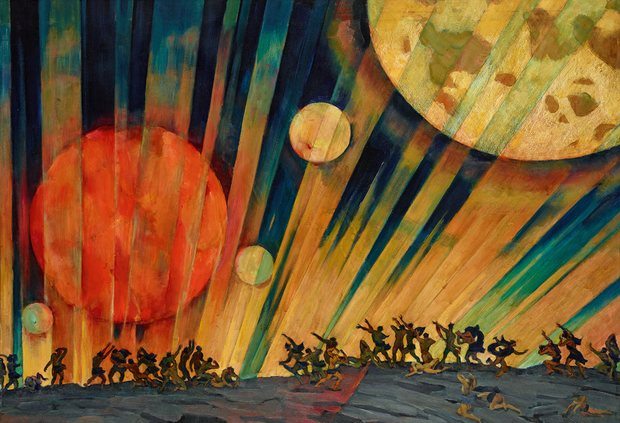 Lenin, dead at 53, appears in monumental close-up in an open red coffin. The queuing mourners, also painted on the spot, are diminutive by comparison. Six years later, in 1930, he is revived as a lifesize portrait of intellectual power, working on his writings (the chair opposite significantly empty, as if inviting the passing worker to join the dialectic).

Lenin grows into a bronze colossus, shrinks to a china figurine, becomes an abstract canvas. He is a dinner plate, a headscarf or a porcelain vase. The leader, dead or alive, comes in all shapes and sizes.

That stands for Stalin and Trotsky too, though the latter is much less of a presence in the Royal Academy’s enormous Revolution: Russian Art 1917-1932 (his face, indeed, scissored right out of that headscarf). But this is no display of communist propaganda. What makes Revolution such a momentous, even historic exhibition is that it brings together all of the art from that period. Not just the Soviet dross – socialist realist utopias, hymns to mechanisation and films of peasants waiting gratefully for the arrival of the first steam train – but the art of the avant garde too. It is the first time we have been able to see the art of the Revolution whole.

After the Bolsheviks took power in October 1917, no social group was more caught up in the revolutionary spirit than artists, composers and writers. And their ambitions – quite possibly for the first time in history – were identical with those of the country’s rulers. Both believed that art could have a purpose beyond itself, that it could help to remake an entire nation, from posters and murals to the uniforms of factory workers and even dainty Trotsky teacups.

This was a new world in which anything was possible – in art as in life. Ivan Puni’s gloriously beautiful Spectrum: Flight of Forms sends Cyrillic letters up through the moonlight-blue paint like freed doves. Alexei Shchusev’s mausoleum for Lenin is a hybrid of pyramid, suprematist geometry and Cunard liner. Konstantin Yuon imagines whole new planets shooting up the picture plane and exploding in beams of coloured light, like the painter Mikhail Matiushin’s visionary rayonist stripes.

It is staggering to see how fast new ideas were crisscrossing Europe even before 1917. Picasso invents cubism; Kazimir Malevich adapts it in Moscow a few minutes later. Aristarkh Lentulov and Boris Grigoriev portray Bolshevik leaders like Cézanne painting Mont Sainte-Victoire. There are post-impressionist onion domes, futurist samovars and wild experiments with space and viewpoint in film and photography. Above all, there is the great revolution in Russian art.

It is all here: from Kandinsky’s first abstract paintings to Tatlin’s ghostly flying machines to Lyubov Popova’s constructivist textile designs. In pride of place is an entire Malevich gallery in which his marvellous Suprematist Construction of Colours tilts away at some stratospheric future in turquoise, pink and bright yellow on white board. Black Square, sharply subversive against the white square on which it floats, feels like the most dynamic antithesis to figurative painting. And believing that the only way to serve the people was through the universal language of abstraction, Popova and Rodchenko rejected even the barest of symbolism, filling the world with their geometric constructivism and its legacy of concentric circles.

How was the post-revolutionary peasant to be painted? In films, he’s a hero tanned by the Soviet sun, singing merrily home after a day in the fields or grinning at the sight of a newfangled milking machine. But in paintings he may be anything from a war-scarred veteran with snow on his boots to an array of dazzling rectangles. Malevich’s Red Square appears irrefutably abstract until you consider its subtitle: Painterly Realism of a Peasant Woman in Two Dimensions. It’s not so hard to discern the life force in that forward-moving shape.

Barefoot, strapping and headscarved, women workers heave hay bales and churns. In the extraordinarily futuristic pictures of Alexander Deineka, surrounded by an armoury of spools and weaving machines, they look like sci-fi robots. Isaak Brodsky paints a shock-worker, as these super-strong labourers were known, half-naked and raised up on scaffolding against the night sky – a Muscovite Michelangelo.

But when he got home, what might he eat? A nearby interior shows a child standing before a table bare of everything but a crust. It is not the least aspect of this tremendous show – superbly co-curated by the RA’s Ann Dumas with two professors of Russian art from the Courtauld – that it keeps on changing the picture, so to speak. You can be looking at a lifesize reconstruction of El Lissitzky’s design for a worker’s capsule apartment, all streamlined beds and pre-Corbusier cantilevering, and then turn to an image of real Moscow lives – Red Army veterans home from the civil war, dazed and unemployed, cigarette sellers shivering on the streets.

Lissitzky himself appears in a glamorous snapshot like a Russian Camus. Rodchenko photographs his friend Mayakovsky, in all his shaven-headed charisma. Man Ray photographs Eisenstein, taking an urgent phone call, as extracts from his films play through the show, and Meyerhold, the great theatre director, appears in hyperreal sketch, graphic watercolour and matinee-idol closeup. Every kind of portrait brings these almost unimaginably remote figures closer.

Russian state art could generalise the proletariat to an inhuman degree. Boris Kustodiev’s The Bolshevik, in which a giant carrying the red banner stomps through a snowbound city, nearly treading on the tiny workers below, contains not one single portrait of a human being. The crowds accompanying Lenin, or marching for freedom, are a faceless blur. This show brilliantly punctuates the widescreen propaganda with sudden closeups of living Russians: villagers struggling to put up a telegraph pole, a peasant returning shellshocked from the front, two philosophers walking through a forest – walking, as it might be, to their fate. For so many of these lives, brought momentarily back from the darkness in this exhibition, would soon be lost.

History runs like wind through this art, shaping everything we see. Figures rise and fall, leaders come and go, deprivation, war and famine creep into the landscape. Ration cards, designed by avant garde artists, show the apportioning of bread – twice as much for the workers as the bourgeoisie – while ex-icon painters are forced to produce lacquered boxes commemorating Red Army triumphs. Dmitry Moor’s devastating black and white print Help!, showing a skeletal peasant throwing his hands in the air, is exemplary. A masterpiece of graphic art, it was meant to justify the sequestering of church funds but it stands, now, as an image of Stalin’s Terror.

The paint grows thin, the surfaces crack; it’s a wonder some works have survived when their makers were suppressed or murdered. (Lenin in his coffin hasn’t been seen for 90 years, ironically, because he couldn’t be shown dead.) The brief but soaring flight of the Russian avant garde falls to earth in a silt of Stalinist kitsch, and what follows is condensed in the intensely moving Room of Memory. The faces of Mayakovsky, Meyerhold and the two philosophers appear on screen before us among police mugshots of the peasants, librarians and housewives who will be shot or worked to death in the gulags. But here they live once more, like this art, in our eyes.