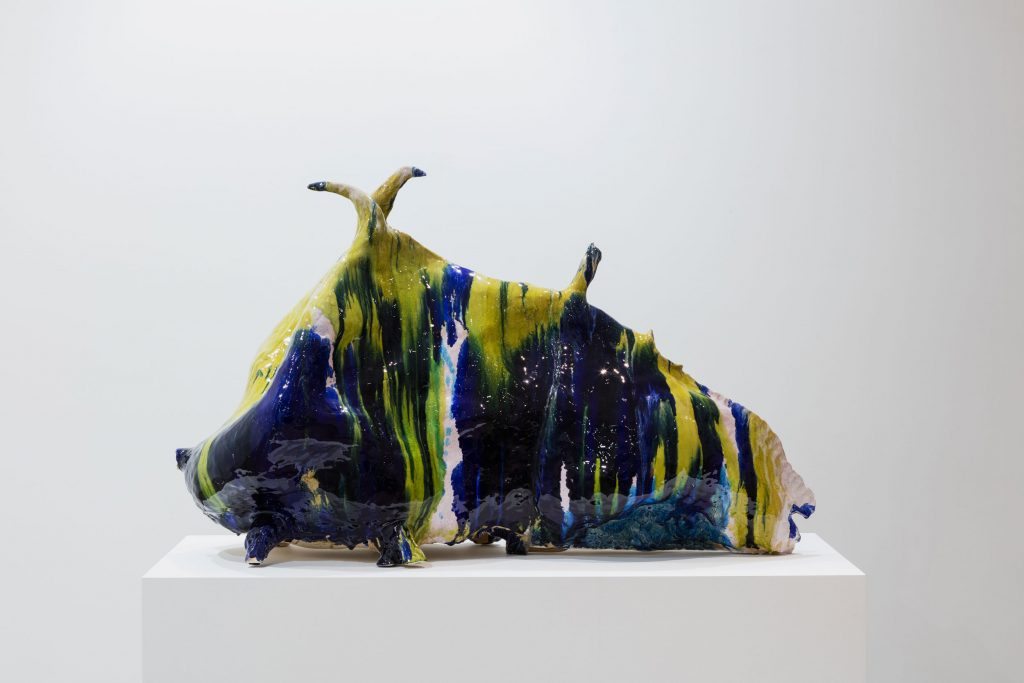 On the occasion of Sebastian Stöhrer’s second solo show at the Carl Freedman Gallery in London, opening on 1st February 2017, Marcelle Joseph interviews the German artist to find out what drives his ceramic sculpture practice featuring vases of all shapes and sizes that resemble either corals from the deep underwater reaches of the sea or peculiar creatures from an alien planet.

Almost every one of your alluring ceramic sculptures contains a well or trough of some sort but I would not describe these objects as vases or water vessels. They look more like creatures from a science fiction film with bodily orifices. What inspires the form of your artworks?  Do you work with any source material in the studio?

It’s a division of work. I have a vision of how the work should look, and then I get help from the clay. It tries to give itself a shape, it leads me. I try to create something alive. It’s important, no matter if it is abstract or figurative, that I create new creatures that populate the world. I don’t work from source material. I only work with the forms as they are shaped in the moulding process – I use a personal language of form that I have developed over a long period of time. 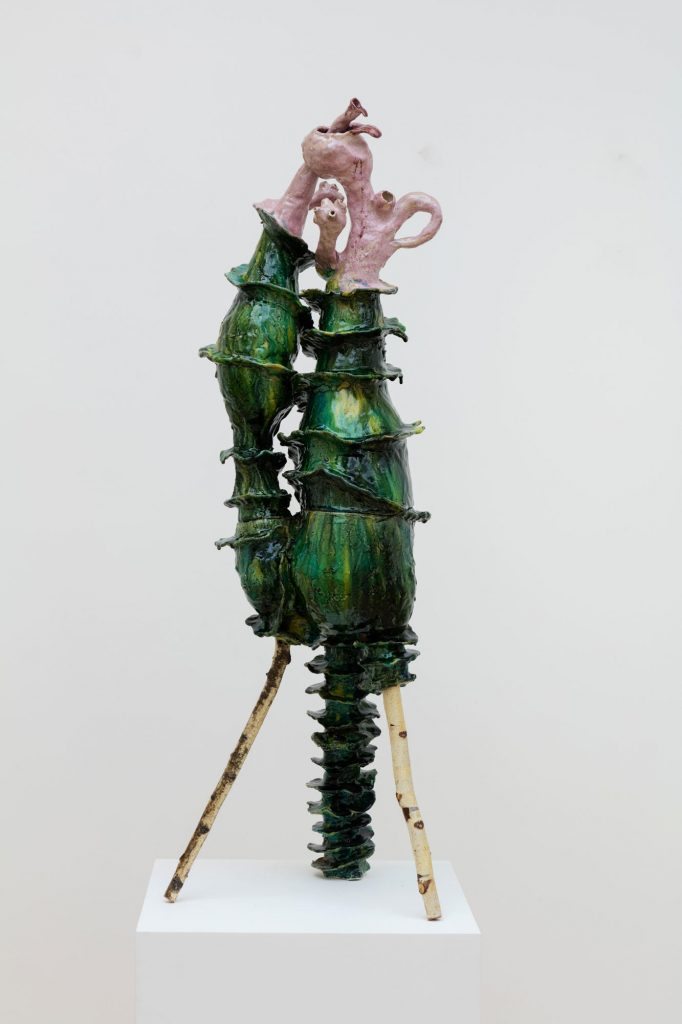 Let’s talk about your glazing techniques. You use an exquisite mix of colours for each sculpture, with one lustrous hue bleeding into another to create the most sumptuous striations or mottled bands of colour. How do you achieve this effect?

The first time I mixed my own glaze, I was making one for low temperature. I burned it by accident at an extremely high temperature and have kept using that mistake up until now. Because of this mistake, the glazes are very brilliant and flow very strongly into one another; they have the character of high burned stoneware. The glazes have their own mind. I decide the colours and give a direction, but I cannot predict the exact finished picture. If working with clay is more of an intuitive process, then working with glazes is a more scientific one. It is a productive experimentation with a lot of accidents. All the glazes are developed by lots of series of tests.

Your creations have been described as surreal, eccentric and humourous and Daniel Birnbaum, Director of Moderna Museet, Stockholm, has compared the genius of your works to that of the American science fiction writer Philip K. Dick. Do your own perceptions of your work align with those of your viewers?

I do not have anything like that in mind whilst I am making the sculptures. However, if the viewer finds a nice, appropriate link to a theme or idea I like, I am happy with that. 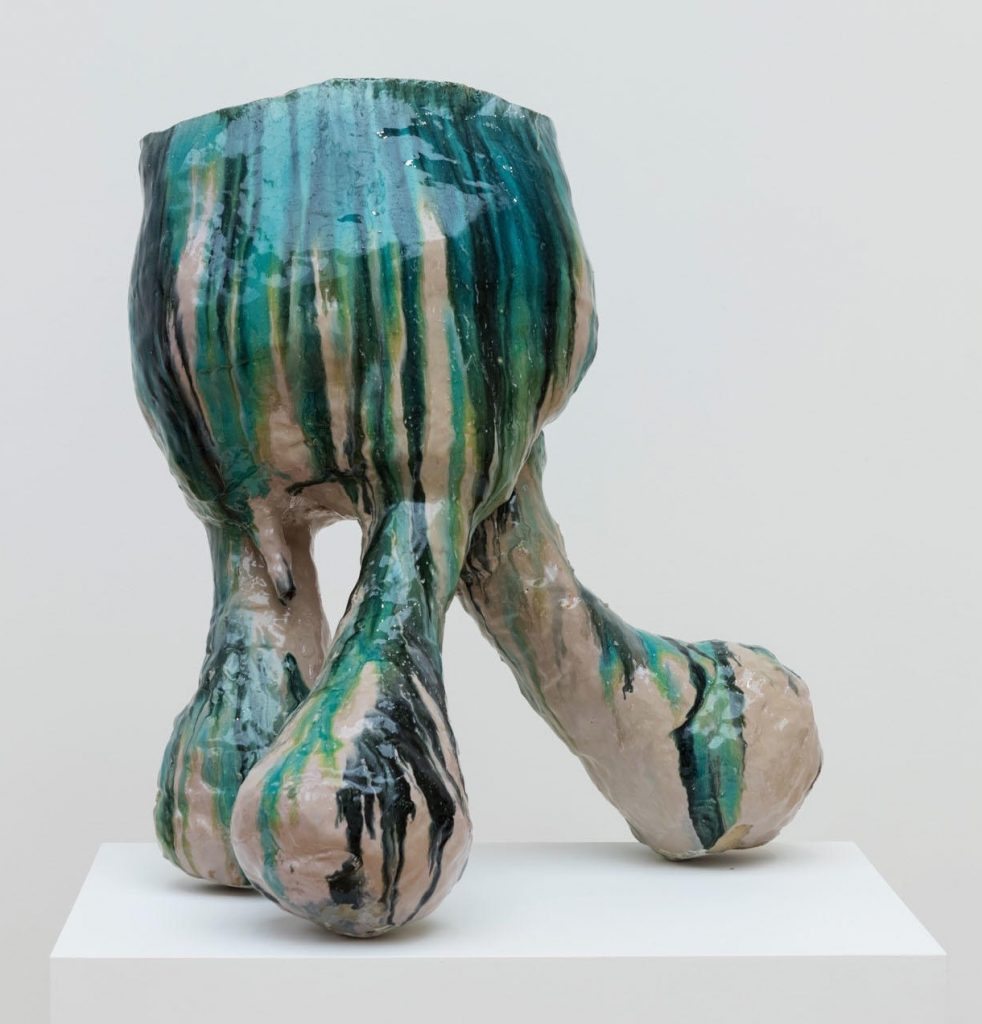 You often incorporate bits of wood or twigs into your sculptures that resemble legs of an animal or insect.  What attracts you to this material and are you interested in their zoomorphic qualities?

I have always been fascinated by the simplicity and beauty of the bent willow furniture from the south of the USA. There was a lucky opportunity to bring these ideas into my work – when a sculpture needs help because of an unstable base, I support it with a stick. Also, the ash of the willow tree makes a perfect glaze. Wood and clay are nearly the same, just in a different physical condition. They fit together.

Having studied at the Städelschule Frankfurt in the 90’s and later under the tutelage of Professor Thomas Bayrle, were you the only student breaking ground and working with clay as a sculptural material back then?  Or did ceramics come later for you?

I have worked with other materials in the past, but the focused use of ceramic began three years ago. I still like mixing materials: stone, metal, wood and clay.