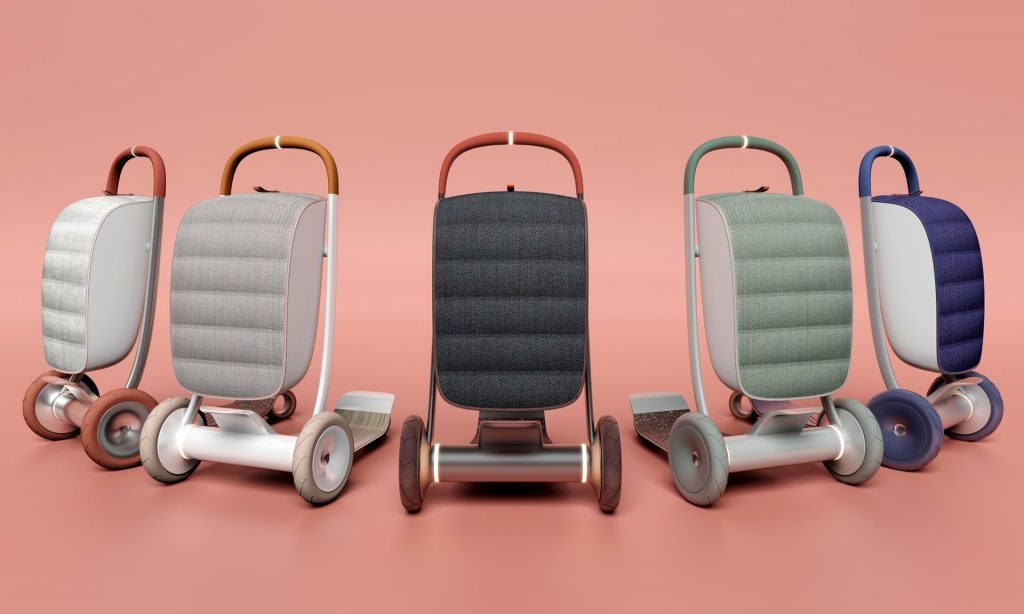 Your chariot awaits … the Scooter for Life. Photograph: PriestmanGoode

This article titled “New Old review – everything you need for a techno-utopian retirement” was written by Oliver Wainwright, for theguardian.com on Thursday 12th January 2017 14.10 UTC

Design for older people might conjure images of clunky beige mobility aids, kitchen gadgets with oversized rubbery grips and those glamorous unisex Velcro shoes long advertised in the back of Sunday supplements. But, as a new exhibition at London’s Design Museum shows, it doesn’t have to be like this. The future of ageing is more likely to involve robotic underwear, sentient digital companions and fridges that stock themselves, if a new generation of inventors have their way.

Thirty years ago, when the Design Museum began in the boiler house of the V&A, one of its first exhibitions was New Design for Old, curated by designer Helen Hamlyn to showcase products designed to help older people stay independent in the home. The futuristic projects included a radical design for a bedside table by a young Sebastian Conran, which was adjustable in height and – gasp! – incorporated a clip-on telephone attachment and a reading light. Three decades on, the 60-year-old Conran is back with another bedside table. This time, it is a piece of smart furniture developed in collaboration with Sheffield Robotics, which follows you around the room, responds to voice commands and can even communicate with a wearable device that alerts relatives if you have a fall. And when you’re sick of its obsequious interfering, you can just tell it to go away.

“Our way of thinking about the elderly has shifted radically,” says the curator of the New Old exhibition Jeremy Myerson, who for the last 16 years headed the Helen Hamlyn Centre at the Royal College of Art, a research group focused on design for our future selves. “The change is not just in terms of what’s possible technologically, but how we now think about ageing. People are staying active in society and the workplace for much longer, and it’s about time our products and services caught up.”

The world is getting older, fast. At the turn of the millennium, there were more people in Europe aged over 60 than under 16 for the first time. In just over a decade, half of the UK population will be over 50, and there are already more than 500,000 people aged over 90. The “new old” are tech savvy, mobile, often still in work, and simply won’t put up with clumsy plastic loo seats and excessively padded shoes any more. “This is the rock’n’roll generation,” says Myerson. “They know about design and they’re demanding more.”

The exhibition covers a broad spectrum of innovations, from practical things that are already in production, to speculative future-looking scenarios and inventions of questionable benevolence.

Silicon Valley poster boy Yves Béhar has two projects in the show that ooze can-do Bay Area futurism. One is a fantastical undergarment that uses military technology designed to help soldiers carry heavy loads in the battlefield: it gives you a boost when you try to stand up or sit down. Developed in collaboration with robotics startup Superflex, it incorporates pods packed with sensors and little motors that pull cords in the fabric to give you extra support, reacting to the body’s movements and adding muscle power to complement the wearer’s strength.

As well as these power pants, Béhar has developed an emotionally intelligent digital companion, with Intuition Robotics, that’s designed to tackle loneliness among older people. Looking a bit like a drunken coffee maker, the ElliQ lolls its head to and fro, blinking its cyclopian eye and alerting you when members of your family have posted a picture on social media that you might like to see, or suggesting activities to keep you busy. It might not seem like much of a substitute for a human companion, but a survey commissioned for the exhibition surprisingly reveals that a quarter of us would prefer to be cared for by robots in old age rather than by people – a proportion that rises to a third among young people.

Does Generation Z really feel closer to its smartphones than its fellow humans? Design and innovation consultancy Ideo has extrapolated our automated, screen-focused, algorithm-driven world to a dystopian extreme, presenting an ageing scenario worthy of an episode of Black Mirror. It imagines what might happen if digital assistants, such as Apple’s Siri and Microsoft’s Cortana, became even more sophisticated, entering our bloodstream in the form of nanobots and helping to guide personal decision-making for our entire lives.

“It would discern how our friends, family and colleagues keep us socially connected, mentally stimulated and physically active as we get older,” says Ideo’s blurb, explaining how “Spirit” would ultimately direct you to meet people who would be good for you, by constantly monitoring your emotional reactions and comparing your profile with others. “What if your instincts could objectively be right?” they ask. “What if they could act in your physical, mental and emotional best interests, supercharged by powerfully accurate AI?” Run a mile, I’d suggest, before their facial recognition software ensnares you.

Next door, minimalist industrial designers Sam Hecht and Kim Colin have conjured a physical mock-up of what such an algorithmically driven home might look like. After trying to help his 87-year-old father order a replacement tumble dryer – and quickly discovering that our appliance supply and installation system isn’t very octogenarian-friendly – Hecht started to imagine what it might be like if a company like Amazon became a property developer and turned its hand to supplying and maintaining domestic products and services.

He describes older people of the future as a demographic that’s already comfortable banking, communicating and managing healthcare online. “So,” he says, “it is not a far stretch to imagine communities of people relinquishing the servicing and procurement of their domesticity to a technology company.” You surrender all your data – the contents of your fridge, the frequency of your washing cycles – to them, and they maintain your daily life in return, robotically servicing your appliances from cavities behind your walls. “It doesn’t become a question of when something breaks,” says Hecht. “It is invisibly fixed before you even realise it is broken, without someone even entering your home.” With Google-owned Nest already peddling connected smart appliances, and Facebook turning its hand to property development, it’s a scenario that’s already tangible.

Related: Design Museum review – temple to design gets the space it deserves at last

Elsewhere there are driverless cars, clever responsive insoles to help people who have problems keeping a steady gait, and BMW factories with adjustable seats on cushioned floors – as well as a genius new three-wheeled mobility scooter by corporate giant PriestmanGoode, which also designs aeroplane cabins and tube trains. The love child of a kid’s microscooter and a granny’s wheelie shopping trolley, its Scooter for Life combines active mobility with storage and compact efficiency. It is designed to keep people agile and fit for longer.

“Inclusive design is thankfully becoming like sustainable design,” says Myerson. “It should be a given for everything, not a specialist niche.” This engaging and provocative exhibition gives comfort that our future selves are in capable hands – but also cautions us to question where those hands are coming from and what they’re really after.

• New Old: Designing for our Future Selves is at the Design Museum, London, until 19 February. 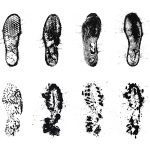 Dropping in April 2021, the Design Museum in London launches its long-awaited exhibition, Sneakers Unboxed: From Studio to Street