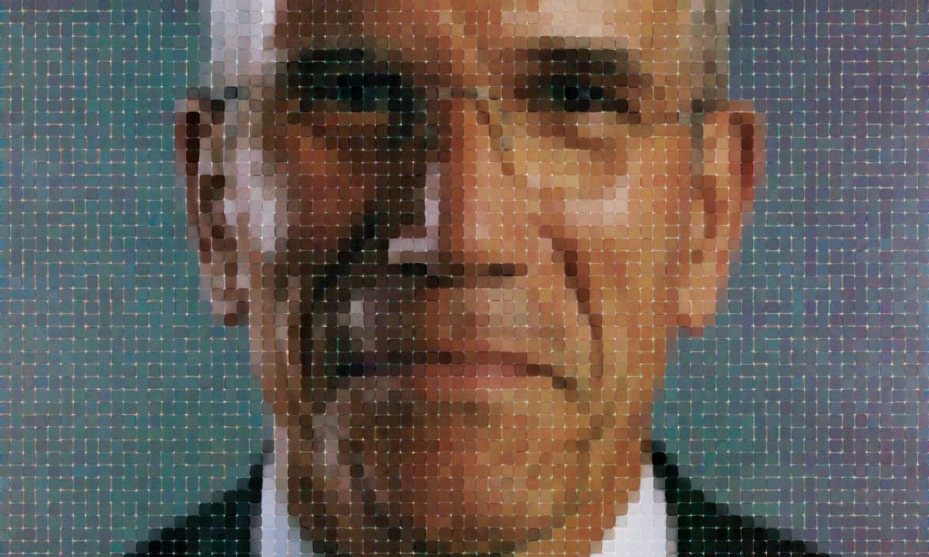 This article titled “Sandy Nairne portrait at NPG is by American artist Chuck Close” was written by Mark Brown, for The Guardian on Wednesday 14th December 2016 16.30 UTC

A huge portrait of the former director of the National Portrait Gallery, Sandy Nairne, is to be the first important work by American artist Chhuck Close to enter a public collection in Britain.

Close is one of America’s most influential portrait artists, known for his gigantic mosaic-patterned works, which he paints from photographs.

But his subjects are mostly American, meaning there is no example of his work in the NPG. Nor is there any in other British collections.

The gallery traditionally commissions a portrait of its retiring director and the name of Close was suggested by the gallery’s contemporary curator, Sarah Howgate, and Nairne, who got to know the artist after a Close self-portrait was exhibited at the NPG in 2005.

Nairne’s successor, Nicholas Cullinan, said: “This wonderful portrait represents both a fitting tribute to my predecessor, Sandy Nairne, and a striking example of contemporary portraiture.”

The portrait, at 1.9m by 1.5m (6ft 2in by 4ft 11in), is hard to miss. It is based on a large-format Polaroid of Nairne taken in the New York studio of photographer John Reuter.

Nairne was a successful and respected director of the gallery between 2002 and 2015, overseeing a rise in visitor numbers by a third to 2 million a year. Before that he was director of programmes at Tate, closely involved in the creation of Tate Modern with Nicholas Serota.

Close, aged 76, has made portraits of subjects including both Bill and Hillary Clinton, Barack Obama, Cindy Sherman, Carly Simon, Brad Pitt and Laurie Anderson. In 1988 he was paralysed because of a spinal artery collapse. Since then he has worked using a brush-holding device strapped to his wrist and forearm.

The portrait can be seen in Room 33 of the gallery.