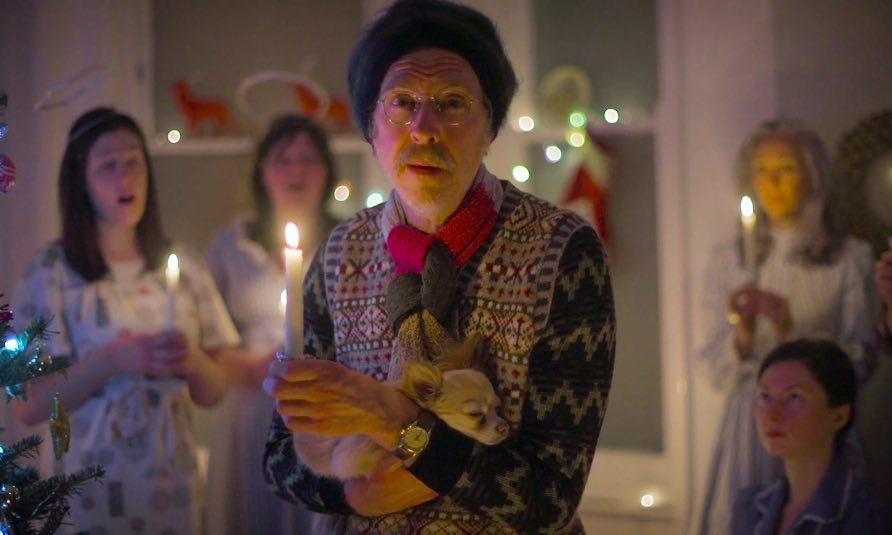 This article titled “Martin Creed’s bleak anti-carol should be Christmas No 1” was written by Jonathan Jones, for theguardian.com on Tuesday 6th December 2016 15.50 UTC

Christmas is a time for thinking about the fundamental isolation of being human, if you are Martin Creed. The artist who made the lights go on and off appears in a succession of Christmassy hats and jumpers in the music video for his song It’s You, beside a Christmas tree, with a small dog in his arms, accompanied by a serious-looking family and a choir featuring two young women dressed as angels. He sings:

Creed’s Christmas song – showing in the window of the Hauser and Wirth gallery in London’s West End – is hilarious. The contrast between the seasonal setting and angelic choir, and the strange, arty bleakness of Creed’s lyrics and deadpan delivery, is a treat. This really would make a great Christmas No 1. It’s deliberately weird, artistically weird, rather than just plain weird like the Jeremy Corbyn Christmas single with its strangely totalitarian idolatry of the Labour leader, sounding like a carol from North Korea. I’d say Cuba, but the music is better there.

Having recently heard a punk choir at Islington’s Union Chapel turn the Velvet Underground’s Sunday Morning into a Christmas carol, I thought that was probably the artistic limit of Christmas songs for this year, until I laughed out loud at Creed’s unmerry masterpiece. It is a joke about sentimentality. Where tacky Christmas songs pile on fake feeling and kitsch emotion, Creed explores how feelgood culture works. The harmonies and soft lighting, communal togetherness and apparent piety of It’s You all help to create a warmhearted illusion. Only gradually do you realise how wrong it all is: he’s depressed, the angels and family all look just as isolated in themselves, and the song is not affirmative, it’s grimly ironic.

Just as Creed’s sculptural objects are bluntly, crassly real – a ball of paper, a lot of balloons – he moves words about with nervous, repetitive anxiety. It’s you, it’s you, it’s you.

Related: 10 of the best Christmas light festivals in the UK

In the 19th century, Charles Dickens observed a society so selfish and mean that he invented the ghosts of Christmas past, present and future to scare Scrooge into a love of humanity. Today, perhaps our bloated Christmas season deserves the opposite. We inhabit a fake, unreal community of online oversharing and warm-hearted TV commercials. When community means chatting online about the latest sentimental ad for supermarket seasonal fare, perhaps what the world needs now is Creed’s anti-carol.

You are not a crowd. You are an individual, and your actual human experience is bounded by that. It’s you in the front and at the back. You all around.

Perhaps this is a love song after all, and perhaps it contains hope and faith. For it is healthy and dignified to know that you are you. Love can only happen between conscious individuals. So can true community. It’s you, it’s you, it’s you – out there in the silent night.