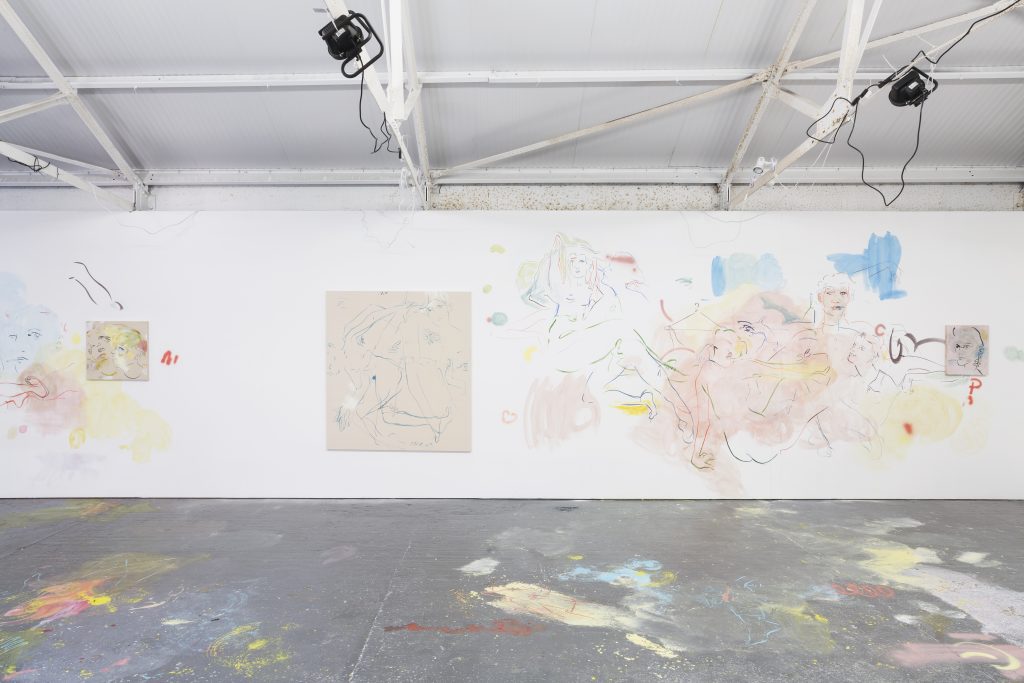 After several other exhibitions in London this year, Glasgow-based France-Lise McGurn pulls out all the stops for her solo exhibition at Bosse & Baum in Peckham (on until 18th December 2016).  Presenting her signature wall and floor paintings alongside her figurative paintings on canvas and a more experimental sound piece, McGurn titled the show Mondo Throb, referencing both the 1970’s mondo genre of exploitation filmmaking as well as excited, inflamed body parts.  In stark contrast to her earlier work that fragmented the human body with a more innocent vibe, these paintings are erotically charged with the viewer treated to a parade of bodies and body parts, from one seated nude gazing upon a topless woman in repose to another nude woman masturbating. The titling of the paintings is revelatory as well (e.g., Aerobics gives you herpes, Betty batteries and Hermione Hormone). 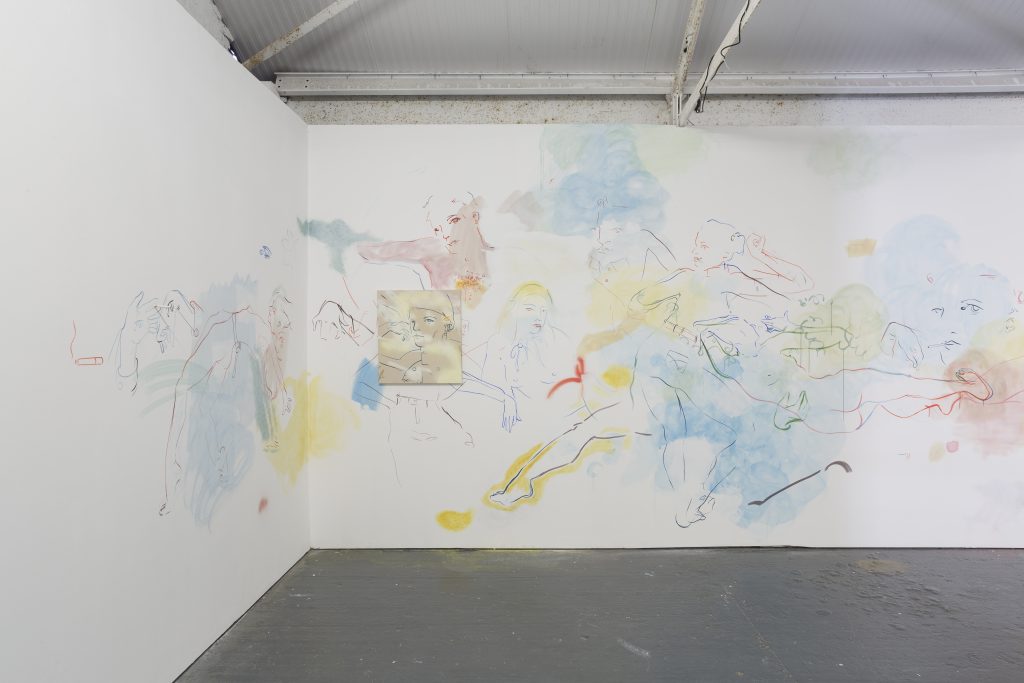 The presentation of the paintings on canvas on top of the wall paintings brings to mind an orgy of limbs or a subtle nod toward club culture, an area of activity where McGurn is incredibly active in Glasgow. She runs a club night residency at the poetry club in Glasgow, in collaboration with Katie Shannon, called DAISIES, where they invite DJs and artists to contribute to the décor and installation.  The floor paintings and artist-rigged lighting in the gallery space further contribute to that club ambience with the random squiggles of paint on the concrete floor suggestive of the stains and detritus left behind after a wild and crazy night on the dancefloor. 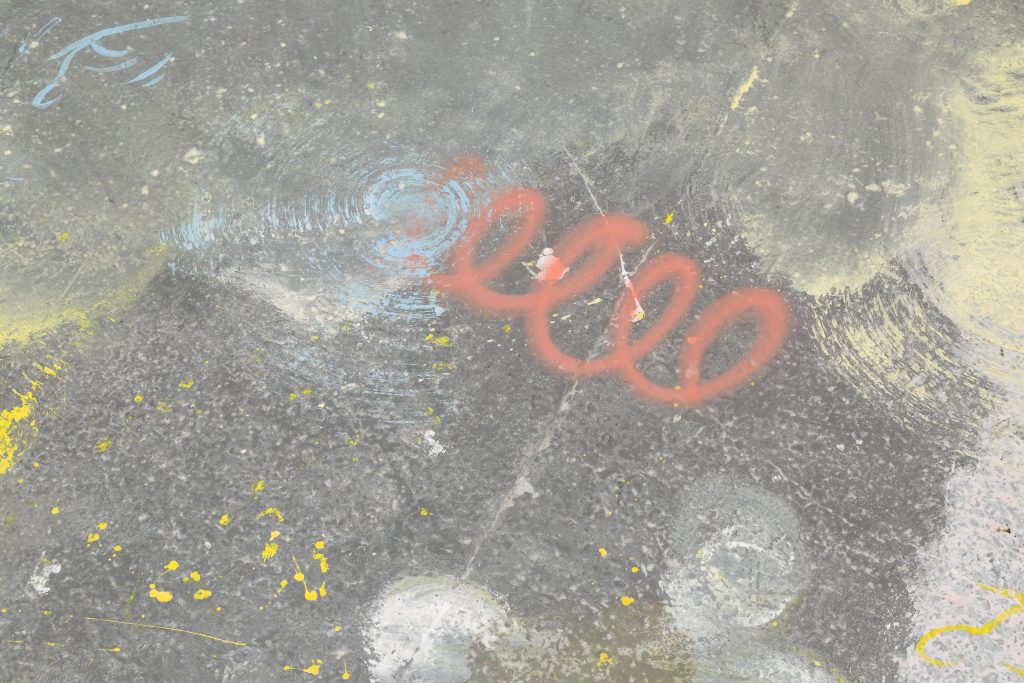 McGurn’s work is developed from her personal archive of collected imagery and moving image files. For this body of work, ecstasy was the focus, and the artist culled imagery from multiple sources from film, television, music and visual culture – from softcore and sexploitation films such as Emanuelle (1974) and Nine and a Half Weeks (1986) to illustrations for Happy Families decks of cards (1939). A visit to this exhibition is strongly recommended whether you are looking for carnal ecstasy or divine ecstasy.  It is a visual feast for the eyes.

For those living in Glasgow, look out for McGurn’s work at the Pipe Factory in February 2017.

All photos courtesy of the artist and Bosse & Baume. Photo credit: Oskar Proctor.

France-Lise McGurn (b. 1983, Glasgow) lives and works in Glasgow. She graduated with a BA from Duncan of Jordanstone College of Art in 2005 and with an MA from the Royal College of Art in 2012.  Selected exhibitions include: Nomadic Vitrine, Recent Activity, Birmingham (October 2016); Felicity Black, Vertical Vulnerability, Caustic Coastal (October 2016); The Old Things, Crévecoeur, Paris (July 2016); Sexting, Kate Werble Gallery, New York (July 2016); At Home Salon: Double Acts, Marcelle Joseph Projects, Ascot (May 2016); Only with a light touch will you write well, freely and fast, Supplement, London (2016) and David Dale Gallery, Glasgow (2015); NEO-PAGAN BITCH-WITCH! Evelyn Yard, London (2016); 3am (solo), Collective Gallery, Edinburgh (2015); A collaboration with Marianne Spurr, Studio Leigh, London (2015); Nos Algae’s, a performance at Tramway, Glasgow (2014). She was part of collaborative performance Amygdala N.O.S with Kimberley O’Neill and Cara Tolmie at South London Gallery (2015), for the launch of Love your Parasites, edited by Camilla Wills, which she also contributed to. Upcoming exhibitions include France-Lise McGurn, Zoe Williams & Urara Tsuchiya at The Pipe Factory, Glasgow (February, 2017).