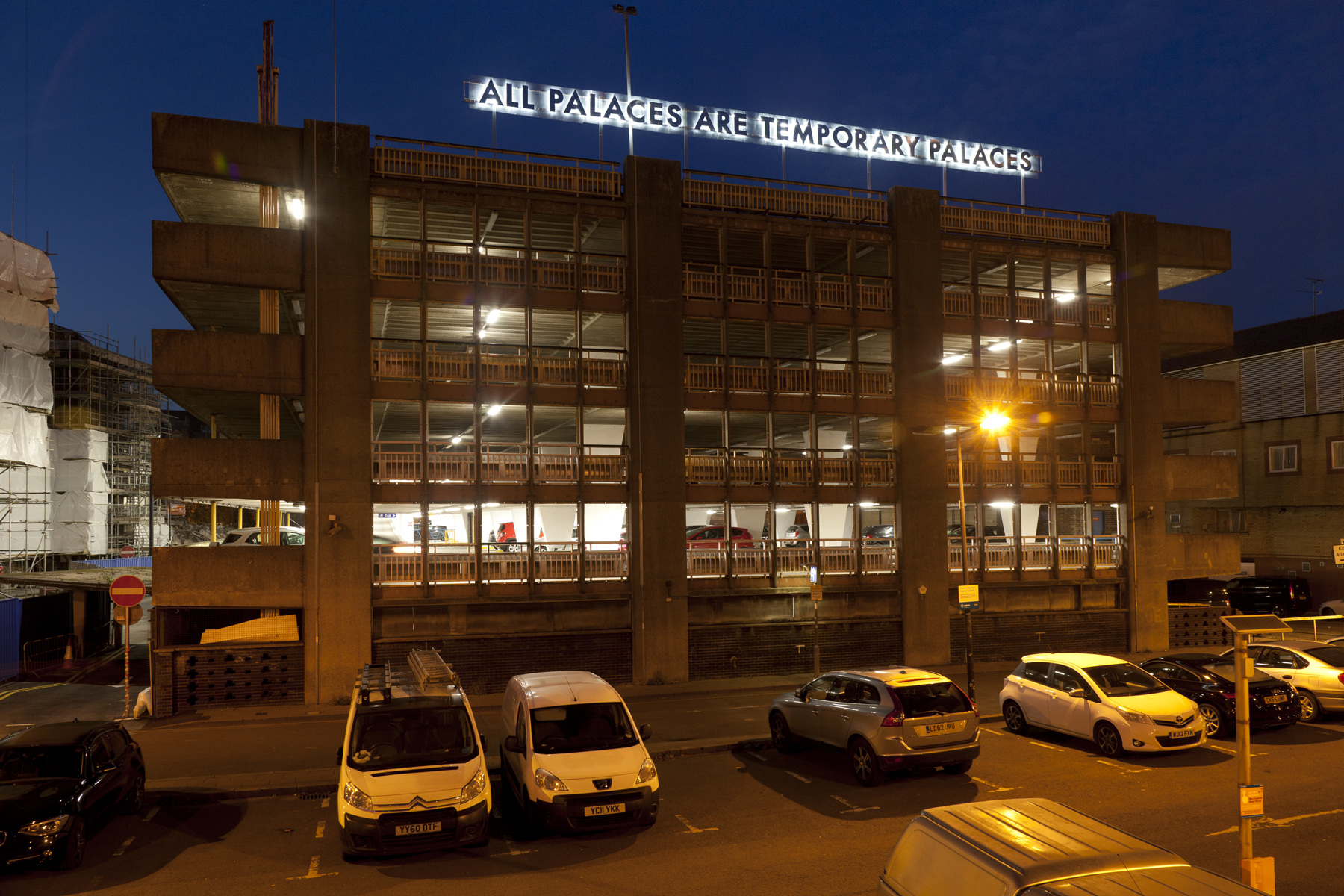 After setting fire to it in Paris and writing it in foot-high, illuminated letters in a DDR-era, Berlin swimming pool, poet and artist, Robert Montgomery is now showing his unmissable message on European migration to the Cardiff skyline: ALL PALACES ARE TEMPORARY PALACES

Dealing in the art of direct and challenging communication through prose and public space, poet and artist, Robert Montgomery interrupts public journeys with moments of beautiful and bombastic reflection, whether in light, fire or billboard-size print. As migration from North Africa and the Middle East into Europe continues, the artist’s most recent large-scale sculptures act as clarion calls for compassion, not least All Palaces Are Temporary Palaces, a 10-metre high light sculpture that was dramatically unveiled in the centre of the Welsh capital as part of Cardiff Contemporary 2016 (through to – Fri 19th Nov 2016).
The phrase, which relates directly to issues of ownership, nationalism and the impermanence of power and possession, takes aim at governments building walls between prosperous western societies and those fleeing war in the east, instead of reaching out their hand. The new sculpture for Cardiff will be unveiled atop the Wood Street Car Park, close to Cardiff Central Station, as the latest in a series of works that address this theme with an increasing sense of urgency. In September, the artist painted the uncompromising statement, ALL EUROPE MUST BE EVERYWHERE, A REFUGE FOR THE BROKEN HEARTED on the side of an apartment building in Stavanger, Norway.

Purposely planned to appear in alternate forms in different cities, All Palaces Are Temporary Palaces, has developed from a smaller gallery piece to a device that Montgomery adapts to new environments, anywhere from a gallery roof to a marooned boat. Perhaps most affecting and pertinent is its appearance in a relic of 20th century political division, a DDR-era swimming pool in East Berlin (latterly repurposed as a venue for club nights, but ironically now forced to close) as he worked at sites across the city for his multi-site 2012 exhibition,Echoes of Voices in the High Towers. Its latest iteration for Cardiff is being developed in laser cut aluminium and appearing at three times the scale of the Berlin version.

“ I’m very worried right now that the debate around Brexit and the way it was conducted has made us a less compassionate country. In reality we aren’t taking anything near our fair share of refugees. There are 4.8 million refugees from the war in Syria. Germany for example has taken in 600,000 refugees, Britain hasn’t even taken in 6,000, that’s less than 1% of the refugees Germany has accepted and I think that is terrible. We have to understand that people fleeing Syria are normal families just like ours— you don’t get on a dodgy boat from Syria with your whole family and just a few possessions unless your life is in danger and you have a broken heart. “ We need to really re-assess how we think of refugees. They are normal families with broken-hearts. We need to find compassion in our hearts. I have friends who were refugees from the Bosnian war so the idea of that kind of desperation is not so distant to me… you have to imagine, what if it was your family? We have to bring back compassion to Britain and begin to show a better example.”