Just opened in New York ‘Fly Away’ is an exhibition of new paintings and sculptures by Rashid Johnson, complemented by a monumental installation that totally works at Hauser & Wirth New York. Taking its name from the time-honored 1929 hymn ‘I’ll Fly Away’, a song reinterpreted over decades by scores of artists – from gospel legends of the Dust Bowl era to such contemporary pop performers as Kanye West – the exhibition reveals Johnson pondering themes of history, yearning, and escape while intensifying his longstanding investigation into the relationship between art, society, and personal identity.

On view through 22 October, ‘Fly Away’ this week include performances by New York-based classically trained pianist and music producer Antoine Baldwin, also known as Audio BLK. Baldwin performs on an upright piano situated at the center of Johnson’s massive installation environment. He will periodically enter the gallery unannounced to activate the space anew by playing original jazz compositions.

‘Fly Away’ is a prelude to Johnson’s upcoming exhibition at the Kemper Museum of Contemporary Art in Kansas City MO, opening February 2017. 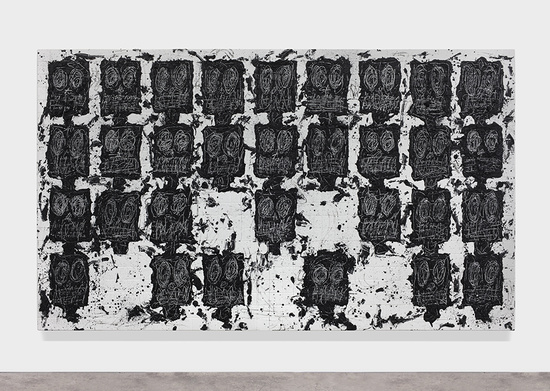 In the first room of ‘Fly Away’, visitors are surrounded by six large-scale panels of white ceramic tile covered with dozens of agitated faces scrawled in black soap and wax. By multiplying into the series Anxious Audiences, Johnson’s earlier individuals have become witnesses. Empty spaces among them simultaneously beckon viewers to participate and suggest rebuke for crimes that have blasted holes in society’s fabric. At a moment when violence, injustice, explosive racial conflict, and economic and political instability threaten to overwhelm civil structure everywhere, Johnson’s Anxious Audience works could be read as history paintings for our times. 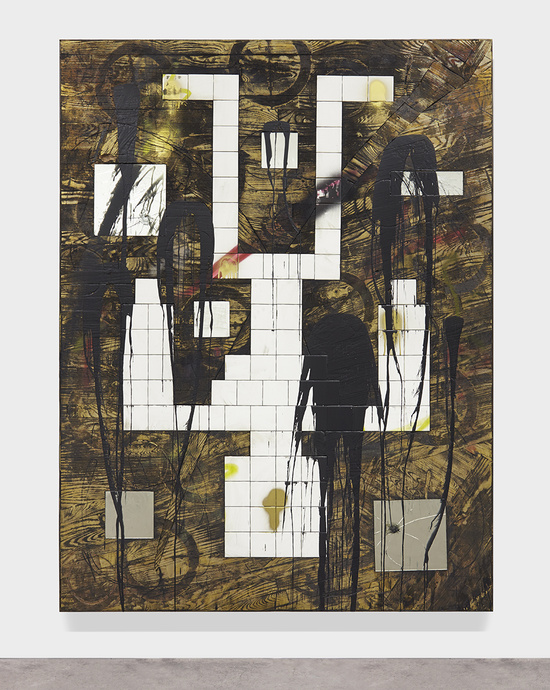 ‘Fly Away’ also presents a new series titled Falling Men, in which Johnson uses his signature materials of white ceramic tile, red oak flooring, mirror fragments, and black soap and wax splatters to depict upside-down figures falling through the air. Each stick-like man is rendered as a series of white squares in a minimal style recalling the animated figures from video games Johnson played as a youth. The figures can also be read as flying heroes, or chalk outlines of dead bodies at crime scenes – inverse numbers in the lexicon of masculine identity. 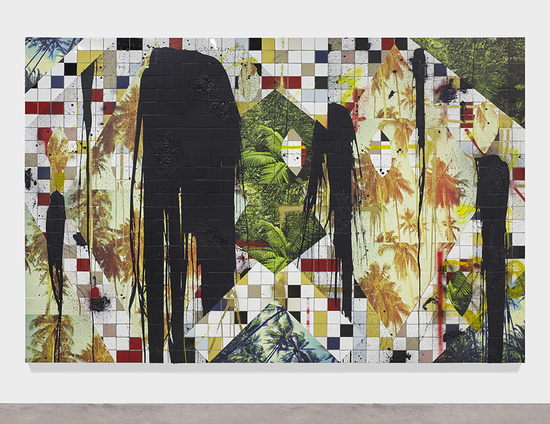 Escape Collages is the a third new series of large-scale paintings in which Johnson employs colour more freely than ever before. Historically, Johnson’s use of color has been restrained and medium-specific: brown comes from the use of wood, green from plants, yellow from shea butter, white from ceramic bathroom tile, and so forth. In the Escape Collages, the artist introduces vivid hues through custom made wallpaper created from stock photographs of tropicalia. These are collaged over multi-colored ceramic tile that is splattered and marked with bright spray paint and swathed with black soap and wax. As a child in Chicago, Johnson has recalled the image of a palm tree invited daydreams about success and manhood: ‘As a kid I remember thinking that if you could actually live in a place with palm trees, if you could get away from the city and the cold, that meant you’d definitely made it.’

Themes of escape and identity reach a climax in ‘Fly Away’ with Antoine’s Organ, the largest of the artist’s architectural grid works ever shown in the United States. Comprising an empty lattice of bare black scaffolding filled with a variety of signifying objects, including books, video screens, mounds of shea butter, and live plants in ceramic vessels hand-built and decorated by Johnson, the work will soar up to the steel trusses of the gallery’s hangar-like space. Deep within this environment inspired by the African diaspora, Johnson has placed an upright piano that will be played periodically by Antoine Baldwin. 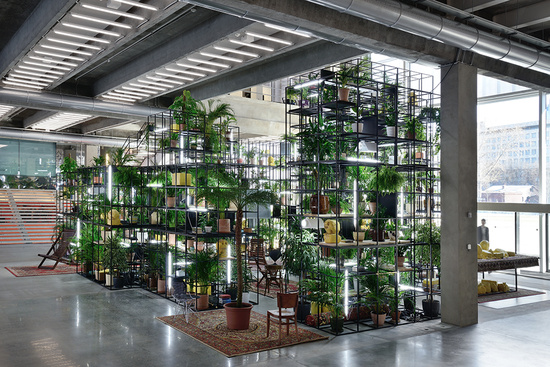 New sculptures complement the Escape Collages and Falling Men works on view, along with a large work table covered in an old Persian rug with rough blocks of shea butter placed on top – a reminder of the process and its author, resplendent but evolving, embodying disparate sources, still in formation.