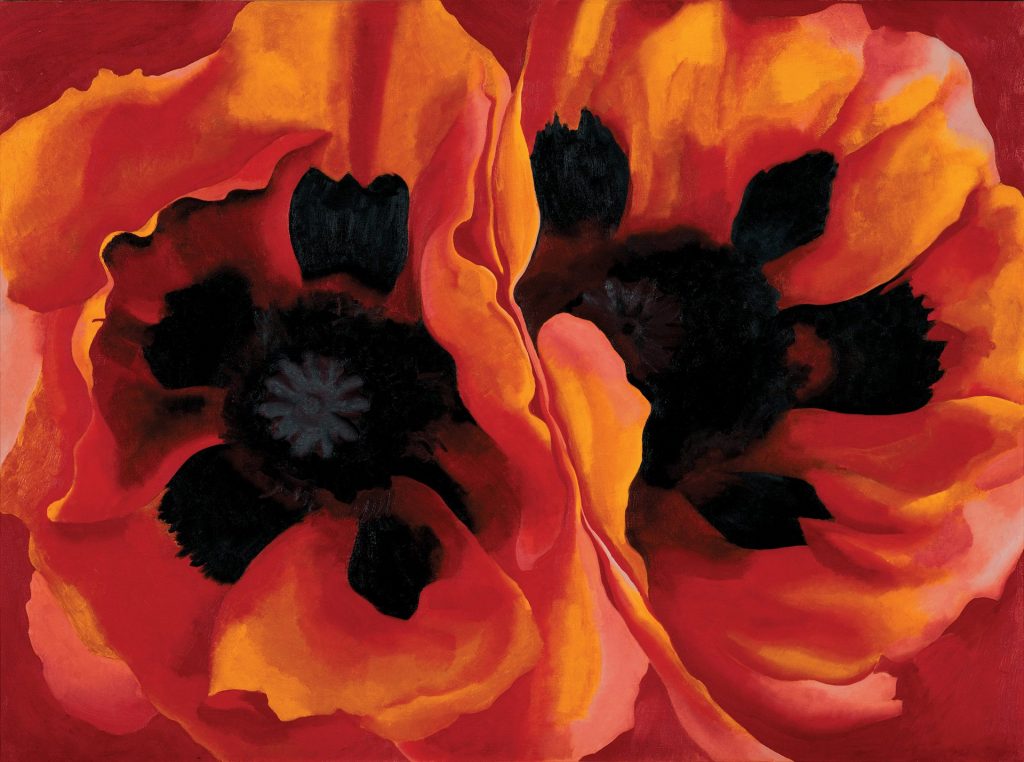 Beginning in grey gloom and charcoal drawings of things she saw only in her mind, Georgia O’Keeffe’s Tate Modern retrospective ends above the clouds, with stratospheric, light-filled views from an aeroplane window that look like nothing at all. There is a tension throughout her work between observation and abstraction. With O’Keeffe, it was all in flux.

What a long, strange trip her life was, taking her from the dairy farm in Wisconsin where she was born in 1887 to her death in 1986 in Santa Fe, by then the most revered and popular female American artist of her age. O’Keeffe’s career and struggles as a woman in the 20th century are as much of a lesson in independence and self-invention as her art.

Indomitable, reclusive, widely travelled, paradoxical, O’Keeffe is much more than the cliche that countless reproductions of her work on bedroom walls suggest. Tate’s retrospective, in line with recent scholarship, attempts to show the artist afresh. But there, when you leave, are the displays of anodyne prints, signature O’Keeffe aprons and New Mexico-themed silver bangles and earrings. We think we know O’Keeffe, and the posters and postcards allow us to know her too well, making encounters with her actual paintings feel superfluous.

Art historian Griselda Pollock calls this a “destructive hyper-visibility”, reinforcing the more stereotypical aspects of O’Keeffe’s achievement. You can’t blame Tate (or the other venues for this exhibition in Vienna and Toronto) for cashing in. They need the money, and this show is a blockbuster.

Peculiarly, O’Keeffe’s art compounds the problem. Her paintings mostly look better in reproduction. She was, first of all, an image-maker, and her paintings are dull, flat, plain things, while the images are gorgeous and awkward and strange.

You can’t help but think this discrepancy was calculated. It isn’t that I clamour for a painterly touch. Lots of artists suppress the surface – think of René Magritte or Agnes Martin – but there is a dispiriting deadness in the physical encounter with much of O’Keeffe’s work. I think it has something to do with the pasty opacity of the paint itself, the way she smooths and blends shadows, giving the work a overly deliberated feel.

Every detail, near and far, large or small, has the same sort of weight and focus. This, in the long haul of a retrospective, eventually becomes enervating. The work can feel plodding and you plod with it. Almost everything appears fully formed, as though discovered or invented before it arrives on the canvas.

The first room in the exhibition is a mockup of photographer and art dealer Alfred Stieglitz’s installation of O’Keeffe’s early drawings and watercolours, in his gallery at 291 Fifth Avenue in New York in 1917. With its grey walls, low light, a sort of dado running round the walls with black curtain material beneath it, the room has the air of a funeral parlour. Based on Stieglitz’s photographs, the walls are hung with O’Keeffe’s charcoals and the only sculpture she ever made sits on the shelf.

In form and size, this white plaster (later cast in lacquered bronze) is perhaps intended as a cloaked and hooded figure, or some kind of aspiring spiritual energy, but looks to me like nothing so much as a little erect phallus. It is almost impossible to see it otherwise, in the same way many of O’Keeffe’s early paintings remind us of female genitalia, labia, vulvas. It isn’t only scholarship that wrestles with sexualised readings of O’Keeffe’s imagery. The female body is always there: in the folds of the dry New Mexican hills with their arroyos and gullies; in her irises; in the full round eggplant; the branches of the dead Piñon tree.

Her early abstractions, made when she was an art teacher working in Virginia and Texas, have an upwardly thrusting, unfurling quality, like lone waves about to break or a plant’s tendrils uncoiling. Their impetus seems to have been psychic more than organic. O’Keeffe was drawing on the same well of theosophical, spiritualist thought as Kandinsky, Mondrian, Hilma af Klint and many other avant garde artists (not to mention composers and writers) of the time. Even Marcel Duchamp was not entirely immune.

O’Keeffe’s charcoal drawings, with their reclining heads, inner worlds and images of the unseen, give way to flowers and clouds, landscapes and leaves, desert-scoured and sun-bleached skulls, the luminous skies of New Mexico. Her New York nocturnes of skyscrapers and the city’s artificial light (painted while she and Stieglitz, then married, were living in a Manhattan high-rise) are as good as any landscape she ever painted. I especially like her view over the East River from the 30th storey of the Shelton Hotel. Everything smokes into the greyed distance.

Many of these New York views were based on photographs by Stieglitz. He also photographed O’Keeffe many times, making her both his muse and an image in her own right. He took her portrait, shot her naked, photographed her breasts and her expressive hands. It is good to have so many of those photographs here. But they turn O’Keeffe into an idealised object as often as they make her their subject.

Throughout her art there is a sinuous, turning line (painted or drawn) that has its origin somewhere beyond the visible. It was perhaps something inate, rather than a passing stylistic affectation. O’Keeffe was certainly alert to developments in art as much as to her immediate surroundings. She travelled to Mexico to meet Frida Kahlo and Diego Rivera. She also met the reclusive Canadian Emily Carr, an artist with an even more spiritual bent. She felt an affinity with Ellsworth Kelly and was interviewed by Andy Warhol.

The real revelations of this show come towards the end: in the wobbling ovoids of pure and radiant sky framed through an animal’s pelvic bone (prefiguring the thin, late modernist abstractions of Helen Frankenthaler); in the muzzy cottonwoods that approach a kind of all-over abstraction; in the aeroplane views of the landscape below, through which rivers run jagged, as instant as forks of lightning. Best of all are the little puddles of cloud, reaching away towards the sky’s rim like infinite Monet lily pads, and another painting, Sky with Flat White Cloud, that reminds me of Agnes Martin and a kind of minimal hard-edge abstraction.

O’Keeffe’s paintings of a square black door, set in the plain wall of her adobe house, from the early 1950s, seem most prescient of the American painting that came after it. For once, the flatness and reticence, the authority of that rectangle on the canvas, feel exactly right. But I wish I cared for O’Keeffe’s work more than I do, or as much as I love the idea of her.

• Georgia O’Keeffe is at Tate Modern from 6 July-30 October.

From tomorrow, Saturday 24 July, Tate Modern invites visitors of all ages to transform the floor of the Turbine Hall […]