Wake up and smell the Manifesta: piles of poo and a look inside Houellebecq's head - FAD Magazine
Skip to content 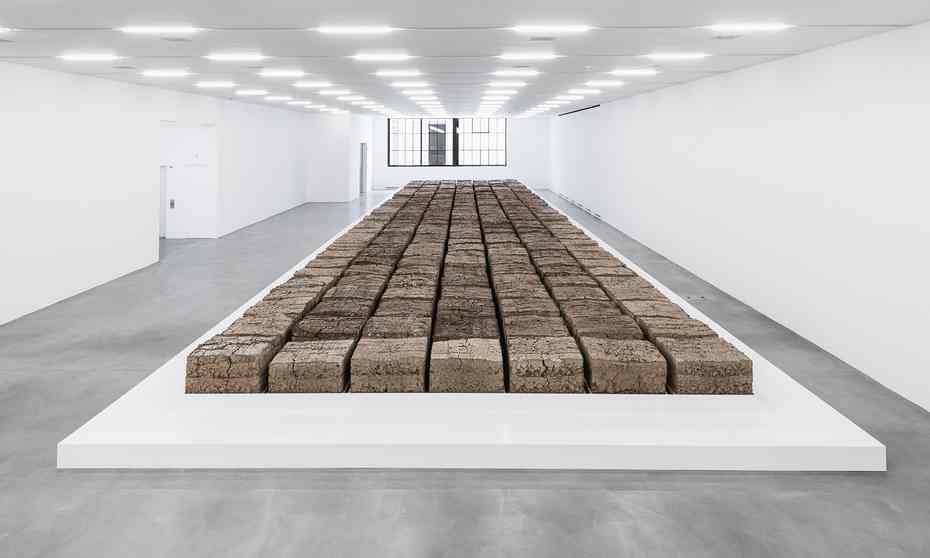 This article titled “Wake up and smell the Manifesta: piles of poo and a look inside Houellebecq’s head” was written by Adrian Searle, for theguardian.com on Friday 17th June 2016 07.00 UTC

I am standing in a room full of shit. Nothing new there, I hear you say. Deposited by the population of Zurich, an entire day’s worth of processed human faeces stand in a gridded arrangement of compressed cubic blocks. Californian artist Mike Bouchet’s The Zurich Load was made not just by the inhabitants of clean, well-ordered Zurich, but in collaboration with the Werdhölzi Wastewater Treatment Plant, where the day’s worth of sludge was collected and mixed with concrete.

Bouchet’s 80,000 kilos of excremental minimalism is installed in the Löwenbräukunst, one of the main sites of the 11th Manifesta art biennial. This converted brewery is also home to both the Migros Museum and many of Zurich’s most prestigious commercial galleries. Good thing the extractor fans are working.

There is a heavy door at the entrance, along with a warning sign. Some visitors back out even as they’re going in. The space reeks of ammonia, and there is a back-taste as psychological as it is physical. “A unique fragrance has been developed to transform the viewer’s experience,” the guidebook tells us. Consider me transformed. If you resist the urge to heave and leave, you do get used to it, only to spend the rest of the day wondering if the whiff is still with you.

Bouchet’s work, as any Freudian could tell you, must have something to do with money. Titled “What People Do For Money – Some Joint Ventures”, and devised by the biennial’s guest curator, multimedia artist Christian Jankowski, the latest incarnation of Manifesta involves collaborations between artists and more than 30 professions in the city. The previous two editions – in St Petersburg and a former mining town in Belgium – both dealt with the social situations of their respective venues.

So, fitfully, does this. Maurizio Cattelan, who had announced he was giving up art on the eve of his Guggenheim Museum retrospective in 2012, has been working with wheelchair racer Edith Wolf-Hunkeler. If Jesus could walk on water, why not an athlete in a wheelchair? The Paralympic champion glided, or perhaps churned, across Lake Zurich, her wheelchair mounted on a raft powered by the wheels of the chair itself – but after I left Zurich. Some things work just as well as rumour.

I did visit Belgian artist Guillaume Bijl’s fully functioning dog grooming parlour, Hundesalon Bobby, where local mutts can get the latest in canine coiffure from dog stylist Jacqueline Meier. I can’t speak of the artistry of the doggy hairdos, but the kitschy, tongue-in-cheek parlour is amusing enough. Normally this place is part of a commercial gallery. If only others diversified so usefully.

As well as the Löwenbräukunst and the Helmhaus museum, Manifesta 11 takes us to more than 30 outlying venues and collaborations around the city, including a cemetery, a public hospital, a school, a tourist office, a Swiss clockmaker’s shop, and out on to a floating Pavilion of Reflection on the lake. Designed and built by the studio of London and Zurich-based architect Tom Emerson, the skeletal wooden structure doubles as outdoor cinema and swimming pool, complete with changing rooms, lockers and hairdryers. It’s like a spa, but with ashtrays, a barbecue and a bar, the perfect place to get Bouchet out of my system.

Is Michel Houellebecq OK, readers of the troubling French novelist often ask. Well, Houellebecq has checked himself in to one of Zurich’s leading private clinics – so upscale the row of clocks behind the main desk are set to the time-zones in Dubai and Stellenbosch, South Africa as well as Switzerland – and had a bunch of scans and blood tests. His charts are printed up in great piles for visitors to take away, though you have to edge round anxious patients in the lobby to get at them. I can’t make head nor tail of the novelist’s haemoglobin levels. Nor does he offer us copies of the bill for his check-up, probably a heart-attack inducing sum.

Back at the Helmhaus, disturbing scans of Houellebecq’s head are on display. There’s the skull beneath the skin, and some squirmy stuff that looks as if parasitic worms have invaded his brain. They probably write his books. On my visit, artist Santiago Sierra, who has also worked in the past with human excrement, had just begun barricading the entrance to the Helmhaus with the help of a local security consultant, who advised the artist how best to ensure the building would be safe from any possible car bombs, snipers and other attacks. Sandbags were on the way, but no razor-wire as yet uncoiled.

Everywhere is a war zone now, Sierra is saying. Next stop, the dentist. To tell the truth I ran away from the surgery, having already seen enough of Torbjørn Rødland’s graphic photographs of open mouths and dental procedures in the Löwenbräukunst. There are even pictures of teeth embedded in sugary foodstuffs, grinning through the patisserie. There’s more photos in the waiting room.

Unfolding through both the Helmhaus and Löwenbräukunst, a parallel “Historical Exhibition”, curated by Francesca Gavin, is a trove of photographs, paintings, sculpture and conceptual works organised by theme, paralleling Jankowski’s “collaborative ventures”. Very often it upstages the new commissions. In the section Break Hour is an installation of Duane Hanson’s 1989 Lunchbreak, a group of life-sized, lifelike construction workers, lounging, smoking, staring blankly, hanging around. That’s builders for you.

In Portraits of Professions, August Sander’s photographs of labourers and singers, artists and seamen, sit next to the film of astronaut Chris Hadfield singing David Bowie’s Space Oddity while orbiting in the International Space Station. This is fun, and though Hadfield has released an album, his artistic career has probably peaked. In Professions in the Art World, I came across oversized hollow papier-mâché heads of curator Hans-Ulrich Obrist and New York art critics Roberta Smith and Jerry Saltz. The cartoonish heads grin knowingly. But what do they know? I feel like snatching one up and inserting my own head, to get some inside knowledge.

At once playful and serious, and providing both context and counterpoint, Gavin’s show rambles through both main venues, with dozens of historical and recent works arranged on freestanding open structures that sidle through the galleries. Without it, much of the current Manifesta would look a bit thin. But there are high-points, including the riotous, scrabbly drawings that cover a huge wall in the Löwenbräukunst, the result of a collaboration between Andrea Éva Györi, a “sexpert” and a psychologist in clinical sexology.

Györi’s drawings are a bacchanalia of masturbating women and explosive fantasies, a ribald affirmation of female sexuality. Nearby, there is a vicious gouge in the wall. It looks like an injury, and was made by Sonja Victoria Vera Bohorquez, a Zurich-based transgender prostitute. Bohorquez is working with Mexican artist Teresa Margolles, who last month organised and filmed a poker game in a hotel basement in Ciudad Juárez, Mexico, with a group of transsexual sex workers. We watch them discuss their dangerous lives, and the unsolved murder of their friend and colleague Karlita in the city in December last year. Margolles has also organised a further Poker de Damas, including Bohorquez, in a Zurich hotel, where Manifesta visitors to ask questions and chat. An insight into other lives, Margolles’ project is one of the best, and toughest, here.

Over at Cabaret Voltaire, original home of the Dada movement, there is an open call for anyone to submit performance proposals. “A performance could consist of an artist kissing a clown or a real estate agent selling an artist’s studio,” suggest Jankowski and the cabaret’s guildmaster. One artist has already proposed a collaboration with a contract killer, while Viennese performance group Gelitin have provided a drawing of the performance group engaging with various professions, including an alien, in a Sadean coprophagic orgy. Where are the sewage men when you need them most? Get me to the clinic. Take me to the spa. 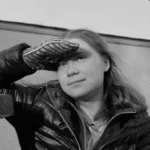