There are always common threads running through every year’s Deutsche Börse Photography Foundation Prize shortlist. It’s no surprise, considering the current climate, that this year’s photographers explore their political surroundings. 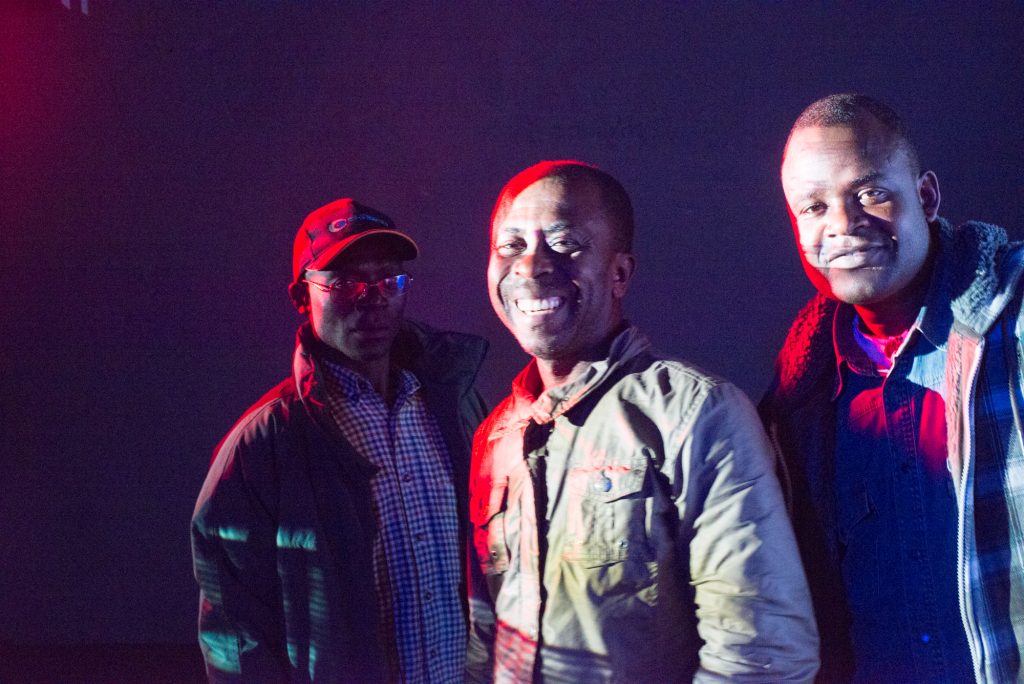 The refugee crisis is the hot topic, which is currently defining all political and social conversations. How we solve the issue and how we deal with it in the interim is the deciding moment of our time. Tobias Zielony concentrates his lens on African refugee activists living in Europe. Through his photographs, first person accounts and newspapers, we are told how these refugee’s flee from violence, many of it stemming from homophobia. However, when they reach Europe, they often find themselves living as outsiders in camps. Zielony’s work puts an individual story and a name to the numbers. This is an important reminder to humanize the numbers fleeing violence. 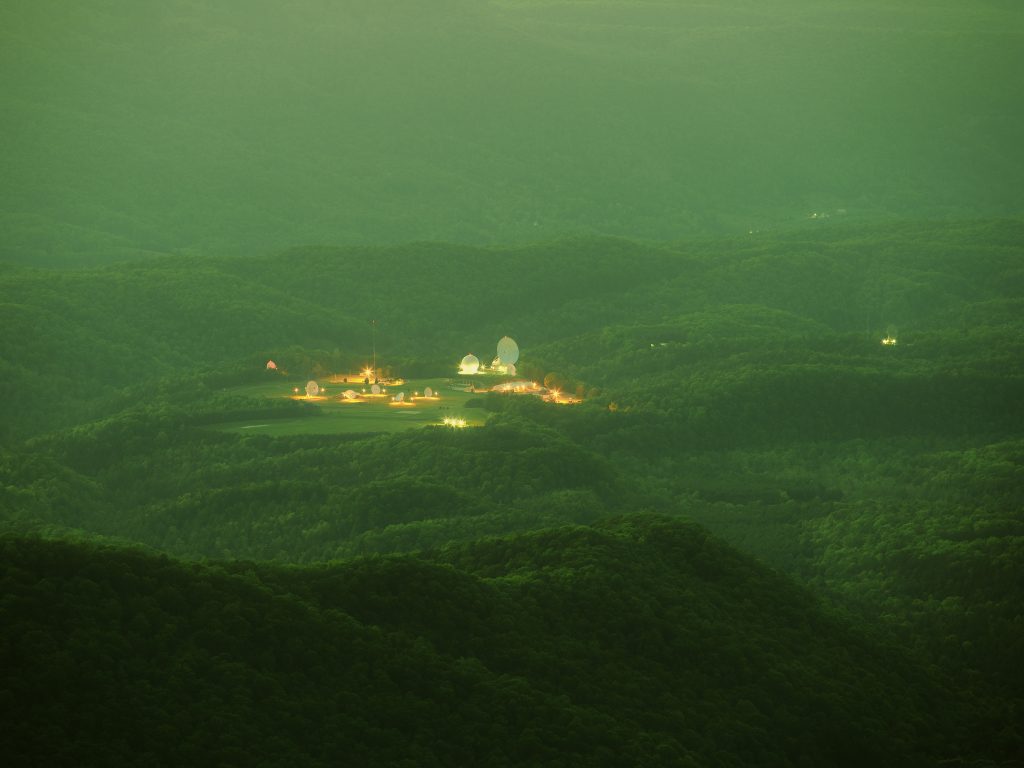 The next artist encountered is Trevor Paglen, whose work takes a phenomenological approach to photographing data collection. Paglen captures the phenomena left behind after drone activity and mass surveillance. One example is of a skyline filled with contrails left behind by drones. Paglan shows that art with a message can also be aesthetically captivating; his photographs are stunning. Paglen beautifully demonstrates that the landscape can often betray surveillance secrets. 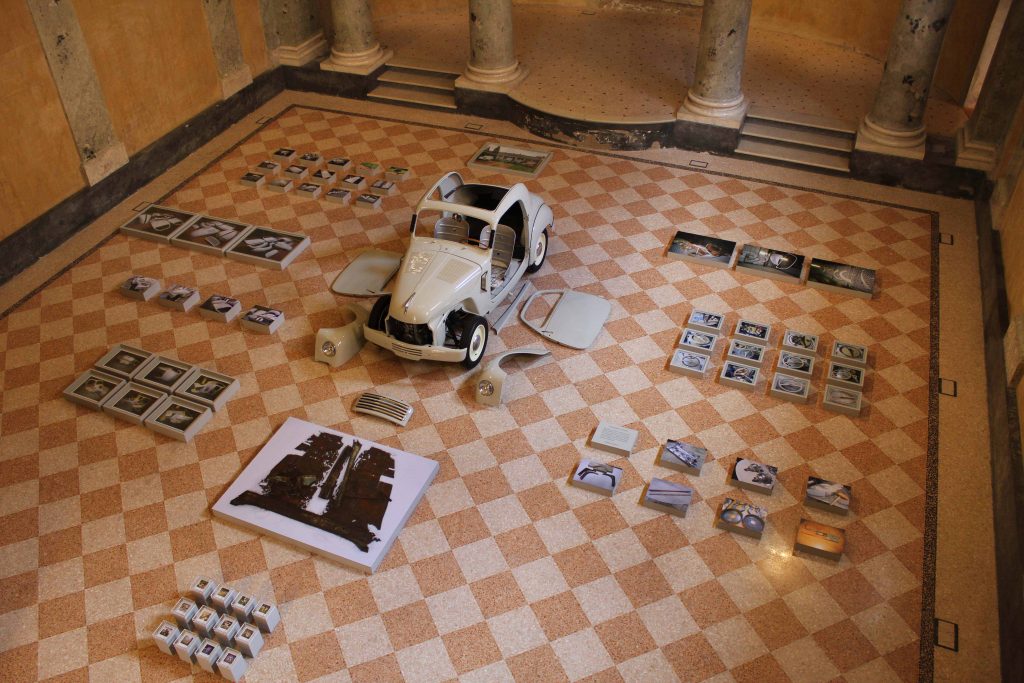 The third artist on the shortlist is Erik Kessels. In Unfinished Father Kessels reflects on the realities of his father’s stroke. By using his father’s unfinished restoration project of an old Fait 500, Kessels explores the loss of memory and vigor that has arisen from the stroke. This unassembled car and photographs of car parts becomes a touching portrait of his father. 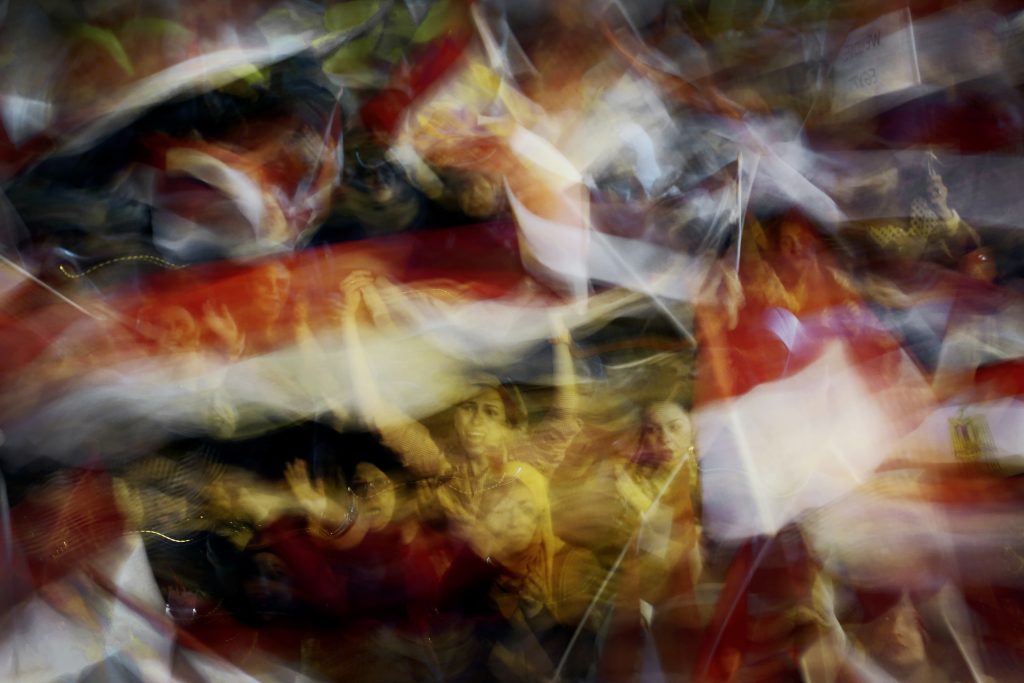 The final artist on the shortlist is Laura El-Tantawy, who was nominated for her self-published photobook: In the Shadow of the Pyramids. Her images document the atmosphere in the events leading up to, and during, the January revolution in Tahrir Square. These are combined with old family photographs in a work, which captures the anger and hope of those protesting. However these aren’t taken in a usual documentary style, instead they use the camera as a paintbrush creating brushstrokes with light. El-Tantawy skillfully combines focused portraits of protestors with blurred lights and movements. This captures and recreates the energy of the crowd. This is especially true in this installation, where the photographs are projected large-scale so that the faces in the crowd are almost life sized. Any visitor to El-Tantawy’s work will feel swallowed up in the protest, instead of watching from afar on the news.

It is due to this skillful combination of photographic artistry and documentary work, that Laura El-Tantawy is my favourite to win this year’s prize. The body of work is stunning and moving. I will be remembering it for a very long time.

Deutsche Börse Photography Foundation Prize 2016 is at The Photographers Gallery until 3th July
The winner will be announced on 2nd June thephotographersgallery.org.uk

Tips for Becoming a Freelance Photographer

How Better Photographs are in the palm of your hand

Remember when back in the day when preparing for a day trip meant packing your music player, phone, games console, […]

He Will Always Be My Son